By adding Windows containers to the traditional LXC concept, Docker’s architecture looks like this

The most basic images for Windows are the following four, listed in order of weight from heaviest to lightest.

We can build our own image by choosing one of the above base images, or a quicker way is to choose an image where someone else has added the packages we need. For example, to run Python on Windows you can choose 3.10.2-windowsservercore-ltsc2022; https://mcr.microsoft.com/dotnet/framework/sdk:4.8 for .net sdk4.8.

For a rough comparison of the image file sizes (which vary greatly by version), here are the image sizes listed with docker images

It is only possible to pull/run/build Windows images on Windows platforms and requires that the current Windows platform be compatible with the image version, unlike Linux containers which do not have any requirements for the current platform. We will learn more about this later.

To install Docker on Windows Server (including the current Windows 2016, 2019, 2022), execute the following command in PowerShell.

If prompted to install NuGet, select Y. If the above command requires TLS, execute the following command first.

To install Docker Desktop under Windows 10 or 11.

The next example is Windows 10 (also for Windows 11), to see the difference between the two container types (Linux/Windows), for which a clean system was installed, and the following is the hardware and software environment of the test machine.

After just installing Windows 10 Pro + Docker Desktop, by default, LinuxEngine is used, so only Linux containers are supported, run docker version to see the server/client version.

We see Server Engine OS/Arch: linux/amd64 above. The linux/amd64 of Server means that Docker can only run Linux containers.

At this point we can run the following command.

It is also possible to build Linux images, such as Dockerfile content.

Then execute the build and test.

It is illegal to try to pull or run a Windows container at this point.

Of course, run/build Windows images don’t work either, because you have to pull the Windows image before run/build. The reason is that it doesn’t match the current linux/amd64.

Go to the host of Docker.

With 48G of physical memory, the Docker host can use up to 39G of memory and all 8 cores of the CPU. This is different from the default allocation of 2G RAM and half the total number of CPU cores in Docker Desktop under Mac OS X.

Note that Hyper-V is not enabled on Windows 10 so far, and the command to view the physical memory is 48G, the Docker host can use up to 39G of memory and all 8 cores of the CPU. This is different from the default allocation of 2G of memory and half the total number of CPU cores for Docker Desktop on Mac OS X.

Note that Hyper-V is not enabled on Windows 10 so far, check with the command.

Switching to use Windows containers 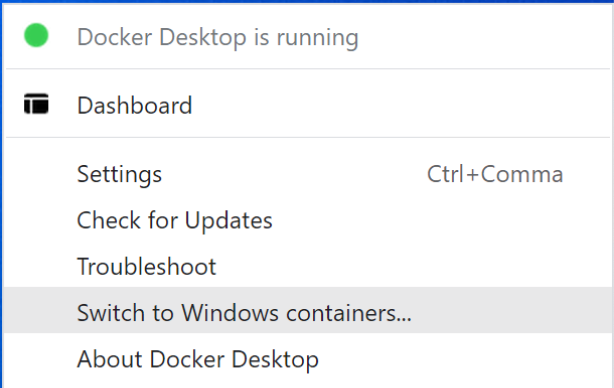 Or use the DockerCli command to switch

However, trying to switch to WindowsEngine, either through the UI or by command, now brings up an error container.

The reason for this is that Hyper-V is not turned on, which can be done in the Turn Windows features on or off interface. 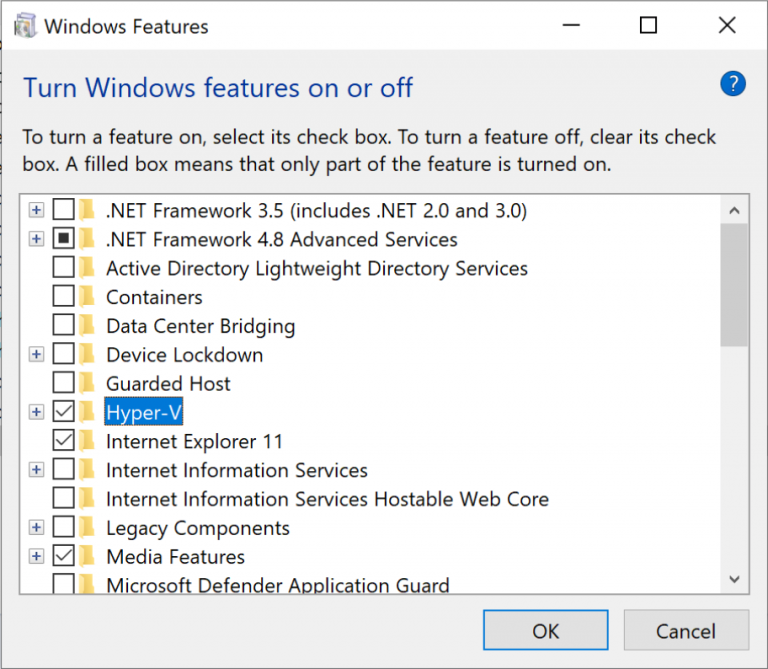 Or use the PowerShell command prompted earlier

Windows will restart automatically after Hyper-V is turned on. After that, you can successfully switch Docker Desktop to Window containers mode by performing the previous step, and then check the docker version.

The version information is displayed more simply, and we see that Server / OS/Arch has become windows/amd64.

If you try to run the Linux container at this point it won’t work either.

Build the Windows image with the following Dockerfile contents.

Switch to WindowsEngine and look at the docker context.

As for the host of the Windows container, it is related to the isolation mode, there are two types, process isolation and Hyper-V isolation.

Similar to the Linux container, processes started with –isolation=process can be listed with the Get-Process command.

Learned about the two isolation modes for Windows containers, which might explain why docker run -p 80:8080 ... The default hyperv isolation is 80 to the highly optimized virtual machine, not the current operating system, you should try with -isolation=process, just make sure the current system version and the container system version to be highly consistent. —– verified that even with –isolation=process -p 80:8080, the ports are still not mapped out.

Knowing this can guide us in choosing what version of Windows to build images on and what version of Windows to run containers on. This is not a problem at all for Linux containers, because basically a Linux system that can run docker commands is free to build/run images of any Linux distribution. When you first encounter Windows containers, it is easy to get frustrated when you choose a Windows machine that can run docker commands as WindowsEngine, and you want to pull, run or build an image, but you still have the Linux container mindset in your head.

For example, pull the image of mcr.microsoft.com/windows/servercore:ltsc2022 on Windows 2016.

But pull mcr.microsoft.com/windows/servercore:ltsc2016 is fine. docker run/build based on incompatible image versions is also the same problem, because rub/build needs to be pulled first.

Therefore, a clear understanding of Windows system and container version compatibility is not likely to make us frustrated and even a bit frantic when we come into contact with Windows containers.

Likewise, follow this compatibility table when pulling or building with docker. Build with a higher OS platform for broader compatibility, but use –isolation=process for the benefit of running containers with the exact same version.

This strict matching of Windows image versions to Windows hosts doesn’t defeat the purpose of running Linux containers, we can run other Linux containers in a Linux host without even caring what kernel version or distribution it is. It’s a bit like when Windows dabbled with Java and came up with Visual J++, which directly undermined Java’s claim to write once and run everywhere.

I’ve been using Linux container services in ECS before, because I had to specify the image when defining the Task, and at that time I was not in the dark about Windows containers, so I always thought ECS didn’t support Windows containers at all. Only recently I noticed that AWS has provided a lot of optimized Windows Server ECS AMI to run docker Windows containers, for example.

The version of Windows can be obtained with the ver , systeminfo commands.

Attempting to use docker run --isolation=hyperv on the selected Windows_Server-2016-English-Core-Containers-2016 prompts that there is no hypervisor.

Although ECS supports Windows containers, Windows images are very large, starting at 10G, which is a beast compared to Linux images of about 100-200M, which can seriously affect the speed of building, pushing, and pulling images. And it’s also slower to start a Windows container after the image is downloaded. So for Windows applications you might want to run past the ECS and let the ELB connect directly to the EC2 Target Group.

It is not yet possible to test the startup speed in different isolation modes for the same image, because the --isolation=hyperv isolation level cannot be used on Windows Server.

The average time taken is 6.15 seconds.

This is not comparable to starting a Linux container under Linux.

So we still support Linux where we can use it.

As usual with Linux containers, first use docker ps to verify that the port mapping is set (only Name and Ports are shown below)

The port mapping is fine, from 8080 on the host to 80 on the container

At this point, check the IP and port number of the container

The other day I’ve been troubled by this illusion, seeing port 8080 from netstat -na and telnet localhost 8080, and instinctively thinking that the Windows Server container port mapping is not working, and that further port mapping with it for ECS will not work. In fact, this is just a display bug, see Open issue: [Windows] Port binding is not visible with ’netstat’ but works correctly. #30300

In this case, the port mapping is actually successful, but you can’t access it with localhost:8080, use ipconfig to find the host IP, and then access the host IP:8080 is able to pass. 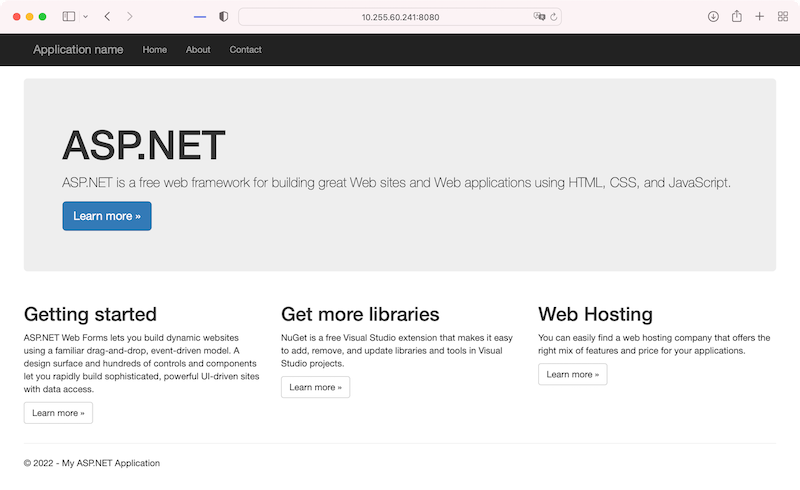 netstat -na is an illusion, localhost:8080 does not work either, nor does 127.0.0.1:8080, which means that docker -p 8080:80 when starting a Windows container only listens on port 8080 of the NIC, and is only visible to netstat -na, and even PowerShell command Get-NetTCPConnection are not visible. But one more -p 8080:80 will expose the problem.

Since then, using Windows containers in ECS is worth practicing further, and the following task is about how to control the size of the Windows Docker image and put it in the Docker Registry with a fast network.