The hottest Linux kernel technology in the last two years is none other than eBPF!

Let’s first look at what the hot eBPF technology really is.

I. Introduction to eBPF

eBPF is a technology that I also came across a few years ago from the blog and book of Brendan Gregg, a performance expert and inventor of the flame chart.

The predecessor of eBPF technology is BPF (Berkeley Packet Filter), which started in late 1992 with a paper called “The BSD PacketFilter: A New Architecture for User-Level Packet Capture”. The paper proposed a technical solution for implementing network packet filtering in the Unix kernel, a new technology that was 20 times faster than the most advanced packet filtering technology at the time.

In 1997, BPF technology was incorporated into the linux kernel and later used in tcpdump.

At the beginning of 2014, Alexei Starovoitov implemented eBPF, which extends the classic BPF and opens the door to a wider range of BPF technologies. 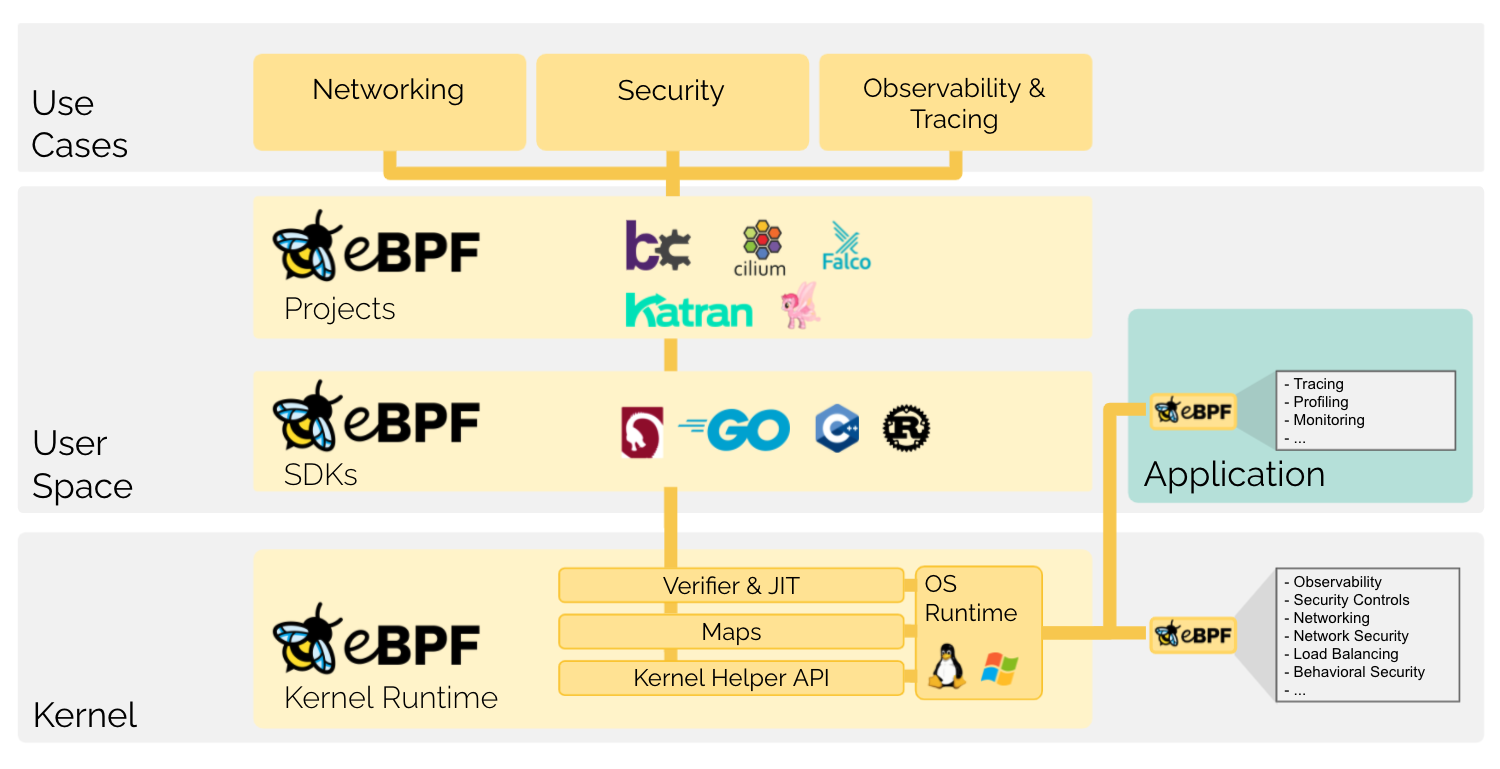 As we can see from the above diagram: eBPF programs run in the kernel state (kernel), there is no need for you to recompile the kernel or compile and mount kernel modules. eBPF can be dynamically injected into the kernel and run and uninstalled at any time. eOnce in the kernel, BPF has a God’s-eye view and can monitor the kernel as well as user-state programs. And eBPF technology provides a series of tools (Verifier) to detect the security of eBPF code and prevent malicious programs from entering the kernel state and executing.

In essence, the BPF technology is actually a kernel opening for the user state (the kernel has already made the burial point)! By injecting eBPF programs and registering events to watch, event triggering (kernel callbacks to your injected eBPF programs), and data exchange between kernel and user state to achieve the logic you want.

eBPF has become the top subsystem of the kernel, and subsequently, if not specifically referred to, the BPF we mention refers to the new generation of eBPF technology.

BPF technology is so awesome, so how do we develop BPF programs?

II. How to develop BPF programs

1. The form of BPF programs

Currently, BPF programs running in the kernel state can only be developed in C (corresponding to the first type of source code file, bpf_program.bpf.c in the figure below), or more precisely in restricted C syntax, and the only one that can perfectly compile C source code into BPF target files is the clang compiler (clang is a compiler front-end for C, C++, Objective-C and other programming languages, using LLVM as the back-end).

The following is a diagram of the compilation and loading process of the BPF program into the kernel. 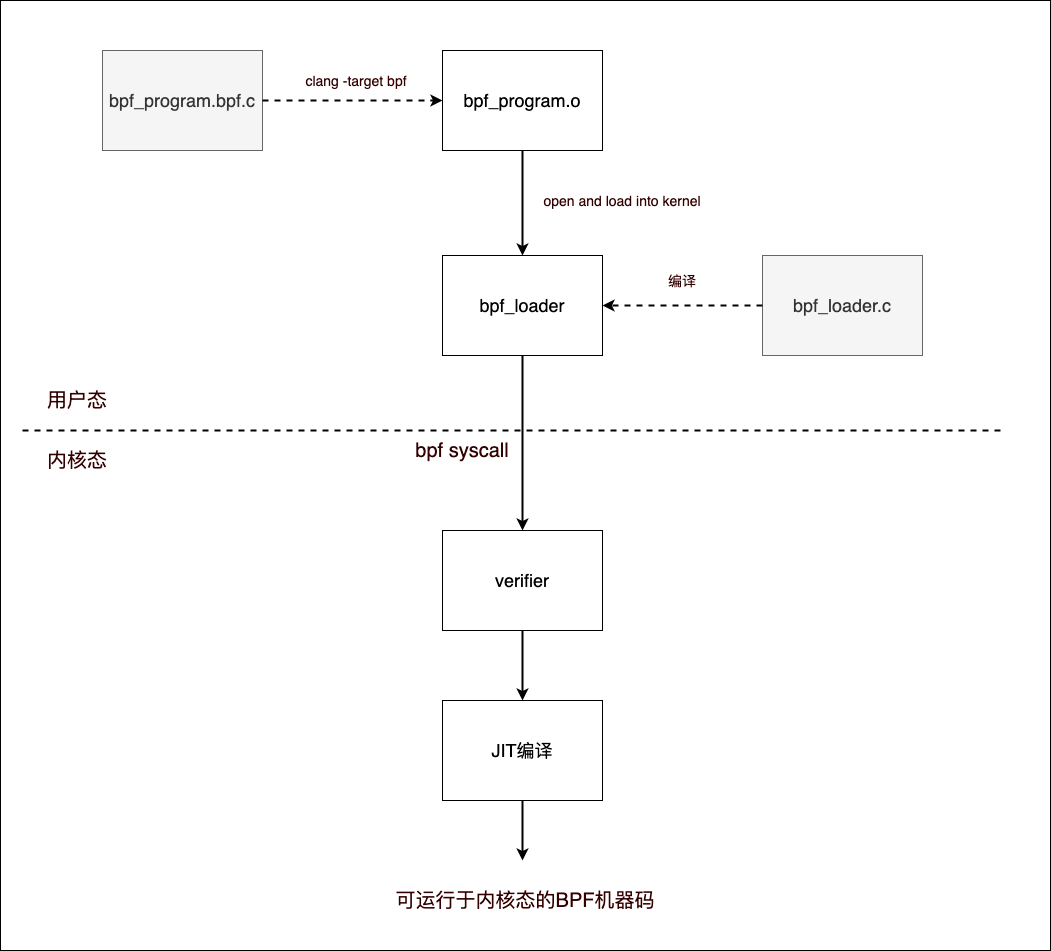 In the Symbol table output by readelf above, we see a symbol bpf_prog of type FUNC, which is the entry of the BPF program we wrote. The symbol bpf_prog corresponds to the Ndx value of 3. Then we can find the section entries with the serial number of 3 in the Section Header in front: tracepoint/syscal…, they are corresponding.

From the readelf output, we can see: bpf_prog (i.e. the section with serial number 3) has a Size of 112, but what is its content? We use another tool, llvm-objdump, to expand the contents of bpf_prog.

The content of bpf_prog output by llvm-objdump is actually the byte code of BPF. When it comes to byte code, the first thing that comes to our mind is the jvm virtual machine. Yes, the BPF program is not loaded into the kernel as a machine instruction, but as byte code, which is obviously a barrier added to the BPF virtual machine for security purposes. As the BPF program is loaded into the kernel, the BPF VM verifies the BPF bytecode and runs a JIT compilation to compile the bytecode into machine code.

The user state programs used to load and unload BPF programs can be developed in multiple languages, either C or Python, Go, Rust, etc.

2. How BPF programs are developed

BPF has evolved over the years, and although efforts have been made to improve it, the experience of developing and building BPF programs is still not ideal. For this reason the community has also created frameworks and library collections like BPF Compiler Collection (BCC) to simplify BPF development, and libraries like bpftrace that provide an advanced BPF development language (understandably a DSL language for developing BPF).

Many times we don’t need to develop our own BPF programs, open source projects like bcc and bpftrace provide us with a lot of high quality BPF programs. But once we have to develop them ourselves, the threshold for developing based on bcc and bpftrace is actually not low. You need to understand the structure of the bcc framework, and you need to learn the scripting language provided by bpftrace, which inevitably adds to the burden of developing BPF on your own.

BPF programs built using these new techniques work across different linux kernel versions without the need to recompile it for a specific kernel on the target machine. There is also no need to install hundreds of megabytes of LLVM, Clang and kernel header dependencies on the target machine as was previously the case.

Note: The principle of BTF and Co-RE technology is not the focus of this article, so it will not be repeated here, you can check the information yourself.

Of course these new technologies are transparent to the BPF program itself. The libbpf user API provided by the Linux kernel source code encapsulates all of the above new technologies, and as long as the user-state loader is developed based on libbpf, then libbpf will quietly help the BPF program relocate to the corresponding fields of the kernel structure it needs in the target host kernel, making libbpf the preferred choice for developing BPF loaders.

Let’s take a hello world level BPF program and its user state loader as an example to see the “way” of implementing a BPF program based on the structure suggested by libbpf-bootstrap, here is a diagram. 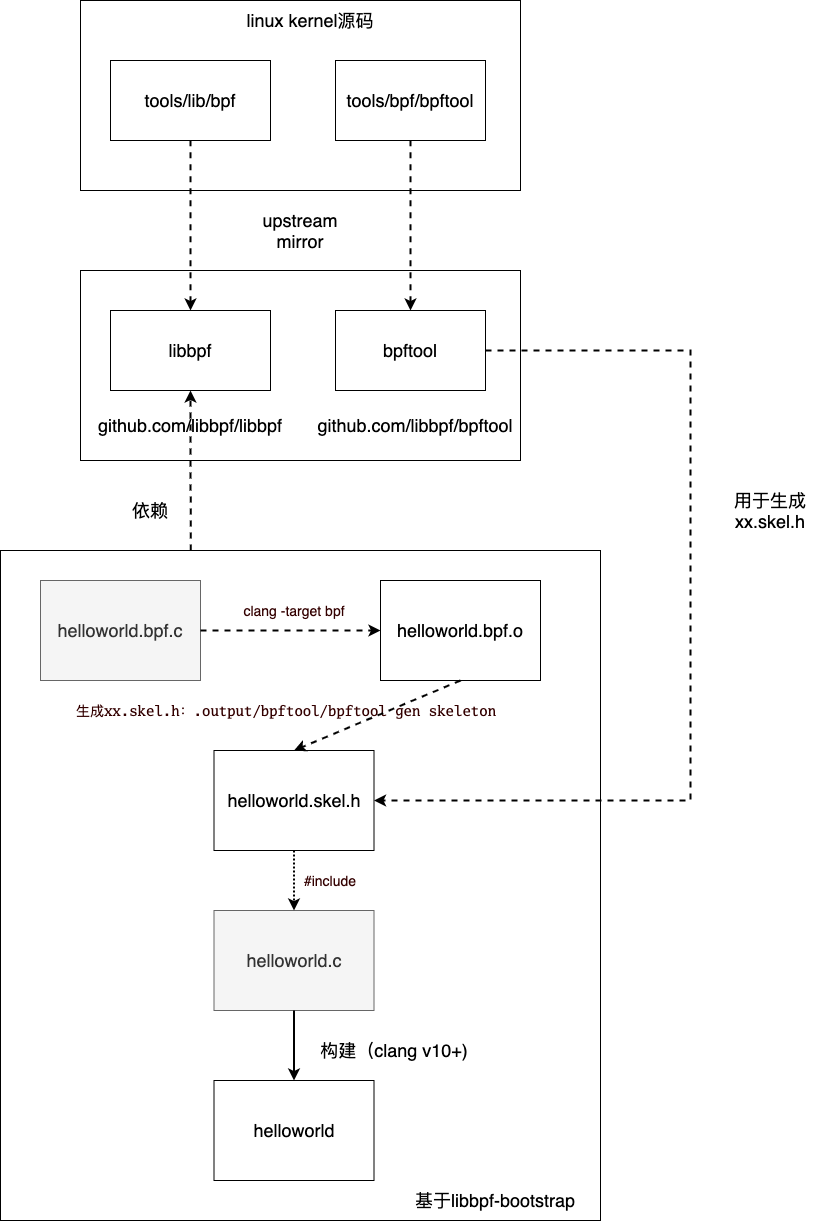 Here is a brief explanation of the above schematic.

We keep talking about libbpf, what exactly is libbpf? Actually, libbpf refers to tools/lib/bpf in the linux kernel code base, which is a C library provided by the kernel to external developers for creating BPF user-state programs. bpf kernel developers have created a mirror repository for libbpf on github.com for the convenience of developers using the libbpf library: https://github.com/libbpf/libbpf so that BPF developers do not have to download the full amount of Linux Kernel code. Of course, the mirror repository also contains some of the kernel headers that tools/lib/bpf depends on, which are mapped to the linux kernel source paths as shown in the following code (the left side of the equal sign is the source path in the linux kernel, the right side of the equal sign is the source path in github.com/libbpf/libbpf).

Installing the dependencies for developing the BPF application on the development machine is an essential first step. First of all, we need to install clang, the compiler for BPF programs. It is recommended to install clang 10 and above, here is an example of clang-10.

libbpf-bootstrap is a simple development framework for developing BPF applications based on libbpf, we need to download it.

libbpf-bootstrap has its dependencies libbpf, bpftool configured in its project as a git submodule.

blazesys is a project related to rust, so I won’t explain too much here.

The git command above will automatically pull the latest source code from both libbpf and bpftool repositories.

With the libbpf-bootstrap framework, it is very simple to add a new BPF application to it. We go to the libbpf-bootstrap/examples/c directory and create two C source files helloworld.bpf.c and helloworld.c in that directory (minimal.bpf.c and minimal.c are referenced), obviously the former is the source code for the BPF program running in the kernel state, while the latter is a user-state program used to load BPF into the kernel, and their source code is as follows.

The logic of the bpf program in helloworld.bpf.c is simple: inject bpf_prog at the buried point of the execve call (set by the SEC macro), so that every time the execve call is executed, bpf_prog will be called back. bpf_prog’s logic is also very simple: it outputs a line of kernel debug logs! We can see the log output via /sys/kernel/debug/tracing/trace_pipe.

Since the bpf bytecode is encapsulated in helloworld.skel.h, helloworld.c, which includes helloworld.skel.h, is written in a more “formulaic” logic: open -> load -> attach -> destroy. For a simple BPF program like helloworld, helloworld.c can even be made into a template. But for user-state programs that interact with kernel-state BPF data, it may not be so “set in stone”.

Compiling the new helloworld program above is also very simple, mainly because the libbpf_bootstrap project has a very extended Makefile, we just need to add a helloworld entry after the APP variable in the Makefile.

Then execute the make command to compile helloworld.

We need to execute helloworld with root privileges.

Execute the following command in another window to view the output of the bpf program (when an execve system call occurs).

IV. Developing a hello world BPF application based on libbpf

After understanding the set of libbpf-bootstrap, we found that it is not difficult to develop a hello world level BPF application based on libbpf. Can we build a standalone BPF project without the libbpf-bootstrap framework? Apparently we can, so let’s try it below.

We will install the compiled libbpf library under /usr/local/bpf for subsequent shared dependencies of all libbpf-based programs.

After installation, the structure under /usr/local/bpf is as follows.

All we are missing is a Makefile, and here is the complete contents of the Makefile.

The only thing to note here is that when installing libbpf/libbpf, the header files under the repository libbpf/include are not installed under /usr/local/bpf, but then helloworld.bpf.c depends on linux/bpf.h, which is essentially libbpf/include/uapi/linux/bpf.h, so in the Makefile, we add LIBBPF_UAPI_INCLUDES for the bpf-related headers in uapi.

The built helloworld is no different from the one built based on libbpf-bootstrap, so the process of starting and running it is not described here.

Note: The above is only a simplest helloworld level example and does not yet support BTF and CO-RE technologies.

In this article, I briefly/very briefly introduced BPF technology, focusing mainly on how to develop a hello world level eBPF program in C. Two approaches are given in the article, one is based on libbpf-bootstrap framework and the other is a standalone bpf program project that relies only on libbpf.

With the above foundation, we are in a good position to get started, and the subsequent article will expand on how to play with eBPF programs. And it will also explain how to use Go to develop user-state programs for BPF and implement loading, hooking, unloading, and interacting with data from the mind and user state of BPF programs.

The code for this article can be downloaded at here.