Let’s start by explaining what a heap (Heap) is.

Heap (Heap) is a generic term for a special class of data structures in computer science. A heap is usually an array of objects that can be thought of as a tree. In a queue, the scheduler repeatedly fetches the first job in the queue and runs it, because in reality some tasks with short time will wait for a long time to finish, or some jobs that are not short, but have importance, should have the same priority. The heap is a data structure designed to solve such problems.

Logical definition: A sequence of n elements {k1, k2… ki…kn}, is called a heap when and only when the following relations are satisfied.

A heap has the following properties. 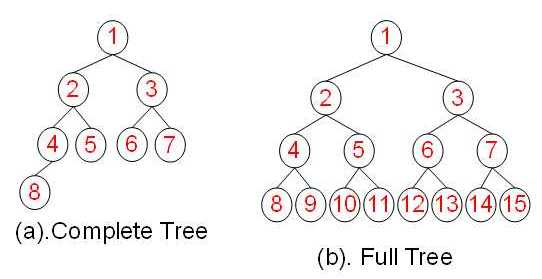 Since heaps are complete binary trees, they can be represented as sequential arrays as follows.

Remember these two diagrams, they will be used later.

After understanding what a heap is, let’s take a look at the container/heap package.

3 What container/heap can be used for

The container/heap package can be used to construct a priority queue.

Take the priority queue of go src as an example.

PriorityQueue is essentially an *Item array, whose Len/Less/Swap are more common arrays used to sort the functions that need to be defined, while Push, Pop are methods that use arrays to insert,. PriorityQueue also provides the update method. Note that since you usually want the priority queue to pop out the highest priority elements, the Less method is written in reverse.

After defining the above methods, PriorityQueue is ready to use the container/heap package.

4 How heap is done

The example given above is amazing to say the least. How does container/heap do it?

The key point is the down function.

The function of the down function is very simple: given the type, the index of the element in the array that needs to be sunk, the length of the heap, the element is sunk to the appropriate position in the subtree corresponding to that element, thus satisfying the requirement that the subtree be the smallest heap.

Why is it that element i, which is smaller than both of its children, can jump out of the loop and not continue? This is because, in the Init function, the first element to start down (sink) is the n/2 - 1th one, and it is guaranteed to always start down from the last subtree (as in the previous figure, n=8 or n=9, n/2-1 is always 4), so it is guaranteed that when Init->down, if element i is smaller than both of its children, then the subtree corresponding to that element, is the minimum heap.

Init, after traversal, guarantees that the array to be Init is a minimal heap.

Let’s see again how heap.Push guarantees that the sequential array remains a minimal heap when new elements are inserted.

First call h.Push to push the elements into the user-defined type, the aforementioned PriorityQueue. The array append, there is nothing to say. Since the element is inserted at the end of the array, the up function needs to be called to “float” it.

Let’s see how up floats.

If element j is smaller than parent i, the two nodes are swapped and the comparison continues to the next higher parent until the root node, or element j, is larger than parent i.

In this way, it is ensured that the sequential array in which the new elements are inserted remains a minimal heap after up.

The update function of PriorityQueue actually relies on heap.Fix when modifying the priority of the elements.

The Remove function is not used in the priority queue example, so let’s look at the code directly.

First swap the node i to be deleted with the last node n, and then sink or float the new node i to the appropriate position. This piece of logic is similar to Fix, but note that you cannot call heap.Fix directly, the last element is to be deleted and cannot participate in Fix.