Before understanding the injection mechanism of Sidecar, it’s important to clarify the what and why questions.

First, what is a Service Mesh? 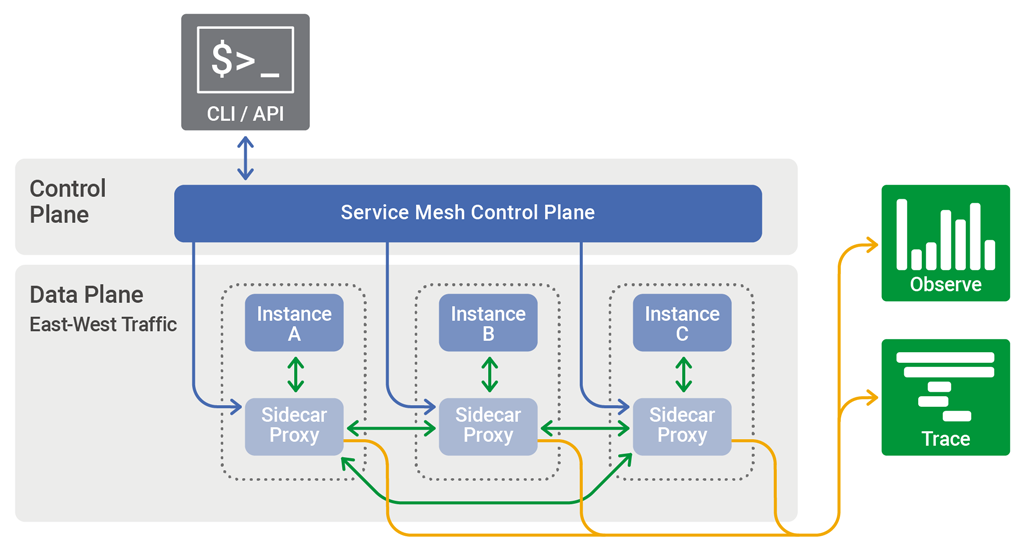 As indicated in the diagram, Sidecar is most accurately referred to as “Sidecar Proxy”, which is essentially a proxy component. This component is injected directly into the same Network Namesapce as the service instance. In Kubernetes, it is injected into the Pod. In this case, Sidecar shares the Pod Network Namespace with the service instance, and inbound and outbound traffic flowing through the instance can be handled with appropriate rules via iptables.

In this article, we analyze the injection mechanism of Sidecar based on Istio, a Service Mesh implementation.

Sidecar’s injection relies on several Kubernetes concepts, the more central of which are the Admission Controller and Admission Webhook.

Admission Controller, as officially explained, is a gateway that intercepts API Server requests (authenticated) and can modify the request object or deny the request. In short, it can be thought of as an interceptor, similar to a middleware in a web framework, a means used by the Kubernetes API Server to intercept requests.

Why does Kubernetes introduce admission as a mechanism?

As you can see, after Authentication & Authorization, the request is handed over to the Admission Controller for further processing, which involves two important phases of Admission, Mutating and Validating, the differences of which are as follows.

Kubernetes provides a lot of built-in Admission Controller Plugin, and some common admission control policies can be found.

It can be said that with the Admission Webhook extension mechanism, it really paves the way for the Sidecar injection implementation later.

Sidecar Injector is the component in Istio that implements automatic Sidecar injection, which is running as the Kubernetes Admission Controller. Recall from the previous concept that the basic principle of the Admission Controller is to intercept requests from the Kube-apiserver, before object persistence and after authentication and authentication. As mentioned before, there are two types of Admission Controllers: one is built-in and the other is user-defined. The latter is where Kubernetes allows users to customize the admission controller in the form of a Webhook, and Sidecar Injector is one such special MutatingAdmissionWebhook.

The Sidecar injection process is shown in the following diagram.

As shown in the figure, Sidecar Injector only performs Sidecar container injection when creating Pods, and after the Pod creation request arrives at Kube-apiserver, it first performs authentication and authentication, and then in the access control phase, Kube-apiserver calls Sidecar Injector in a REST manner simultaneously. Webhook service to init and inject the istio-proxy container, and finally store the Pod object persistently in the etcd.

By default, Sidecar Injector only takes effect for the creation of Pod resource objects under the namespace whose tag matches istio-injection: enabled. The access path to the Webhook service is /inject, and the address and access credentials are configured under the clientConfig field. The Istio Sidecar Injector component is implemented by the sidecar-injector process, and the Sidecar Injector implementation consists of two main parts.

Sidecar Injector handles the AdmissionRequest requests from Kube-apiserver as a lightweight HTTPS server.

Typically the Pod Sidecar container is injected by the following steps:

You can view the injected configuration item istio-sidecar-injector.