The Kubernetes Resource Orchestration Series, starting from the underlying Pod YAML, progressively explains related content, hoping to answer some of your questions about Kubernetes and give users a deeper understanding of cloud-native related technologies.

The overall structure of Pod YAML can be initially divided into Resource, Object, Spec and Status. This article will focus on each of these four parts. 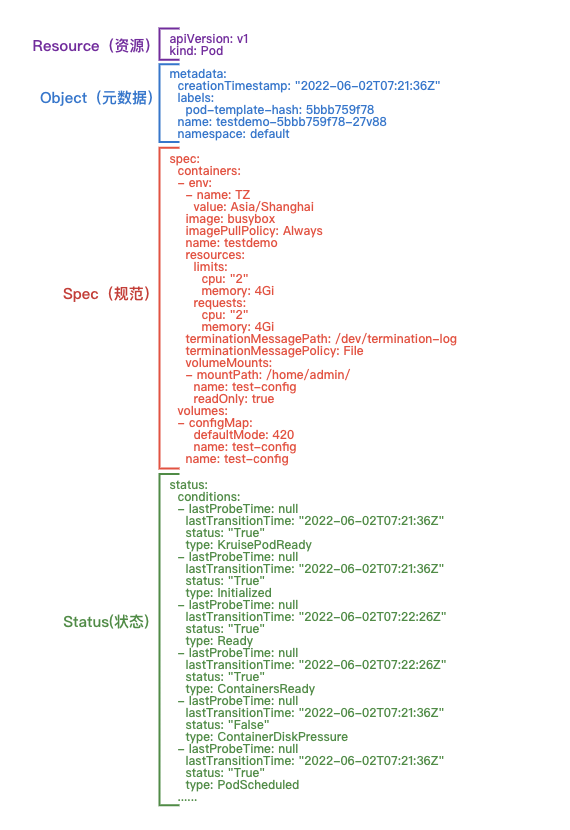 The overall structure of the Rest API, with Pod as an example.

Based on the above data presentation, apiserver will naturally register the following rest api accordingly.

Later, based on the extension, we need to specify the method, so that a truly complete Rest API is born.

The rest api specifies the resource’s kind, apiVersion, and namespace, name of the Object, and as a public structure that all k8s resource objects refer to, there are naturally many public mechanisms for use.

Looking at the above YAML, let’s organize it a bit, there are some fields like this: 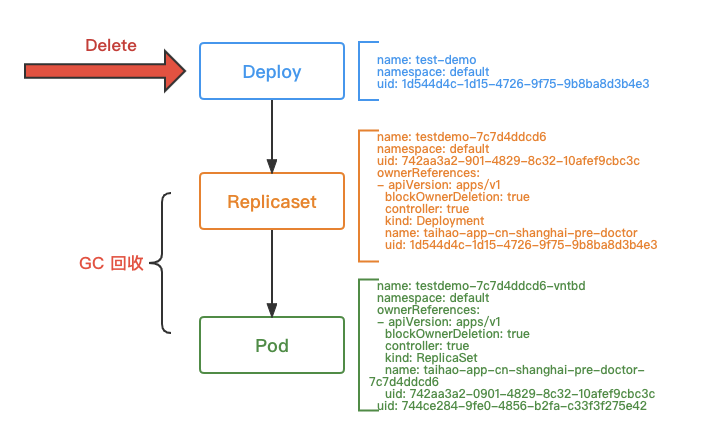 Based on label&labelselector, the top-to-bottom filtering induction is clarified; based on owner&GC, the recycling process of associated resources is clarified.

Spec, as the desired state of Pod, to some extent also covers the logic of the complete life cycle of Pod, which is divided into the following phases.

After the Pod resources are created, they are in the unscheduled stage, and the scheduler is scheduled based on the configuration of the pod yaml itself and the state of the node resources.

The scheduler will go to analyze the podyaml, extract the policy from it, and match it with the node configuration in the node group. If the match is successful, it will select the best node, re-modify the pod yaml, and update the spec.nodeName to finish the whole scheduling session.

Node tag filtering policy to filter the existence of nodes for topology.kubernetes.io/region: cn-hangzhou

Taint policy, when a taint is configured on a node, if the Pod does not have a policy to tolerate the taint, the Pod is not allowed to be scheduled to that node 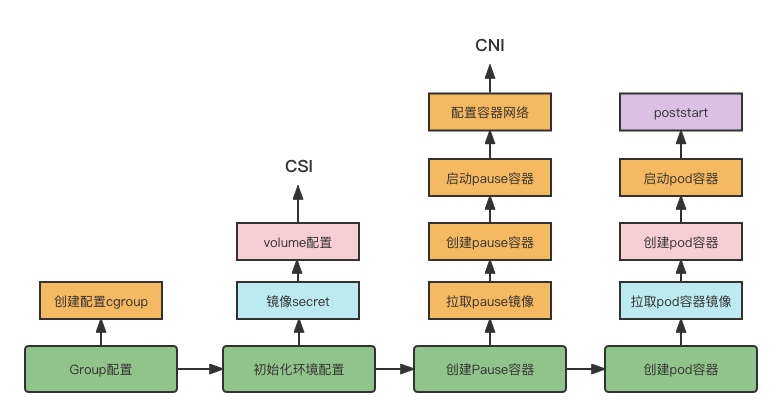 In the above phase, some key concepts will be selected for detailed explanation.

Note that containers is used in the plural and can be filled with multiple container images: for example, you can put nginx and business containers. The advantage of this is that you can minimize the number of non-business related code or processes in the business container.

The current poststart demo is to initiate command commands and can also initiate http requests, the main role can be used as resource deployment and environment preparation.

During the running phase of a Pod, the Pod is checked for health, and the current kubelet provides three ways to determine this

readiness and liveness check parameters are the same

readiness, liveness although the parameters are not the same, but the results of the test behavior is not consistent.

When the condition.status is false, the Pod will always be unhealthy, even if the readiness check passes, until the third-party system goes to operate the Pod to update the condition.status to true, in order to turn the Pod into a healthy one, so that it can access more Pod health indicators.

When the client initiates a request to delete a Pod, it actually configures pod.metadata.deletionTimestamp, and after the kubelet senses it, it starts the Pod recycling process

The whole Pod recycling cycle, in general, is preStop->SIGTERM->SIGKILL

When kubelet does preStop, it starts to launch SIGTERM to the processes in the container, and if it exceeds the total default time of 30S (metadata.DeletionGracePeriodSeconds), it will force to launch SIGKILL to the container, that is, the total time of preStop+SIGTERM is not allowed to exceed 30s.

Based on the above YAML example, the Pod status state is broken out and analyzed:

By breaking down the four Pods above, we’ve basically figured out the problem of where a Pod comes from under k8s. The subsequent articles in this series will continue to address the “where to” question: the beauty of Kubernetes is that it is not just about pulling up a workload, but about being able to orchestrate large workloads with ease.