kube-apiserver is a component in kubernetes that interacts directly with etcd and controls changes to core resources in kubernetes. It provides the following main functions.

kube-apiserver interacts with other components mainly by providing APIs to the outside world, which can be obtained by calling kube-apiserver’s interface $ curl -k https://<masterIP>:6443 or through its provided swagger-ui, which has the following three main APIs.

The URL of the API consists roughly of /apis/group/version/namespaces/my-ns/myresource, where the structure of the API is roughly as shown below. 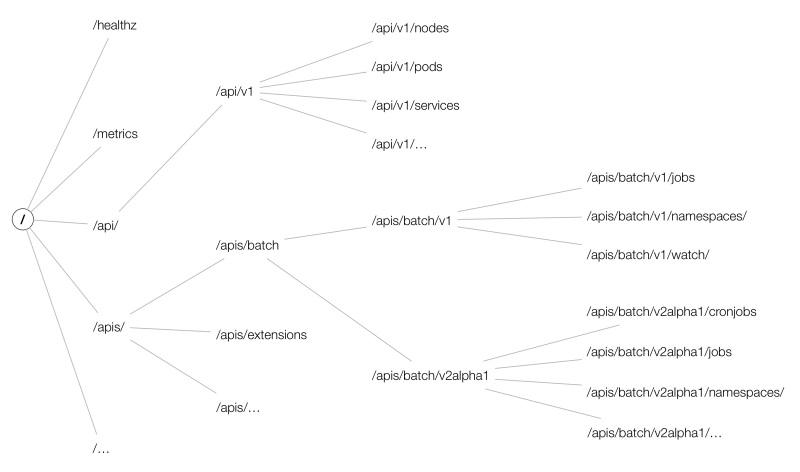 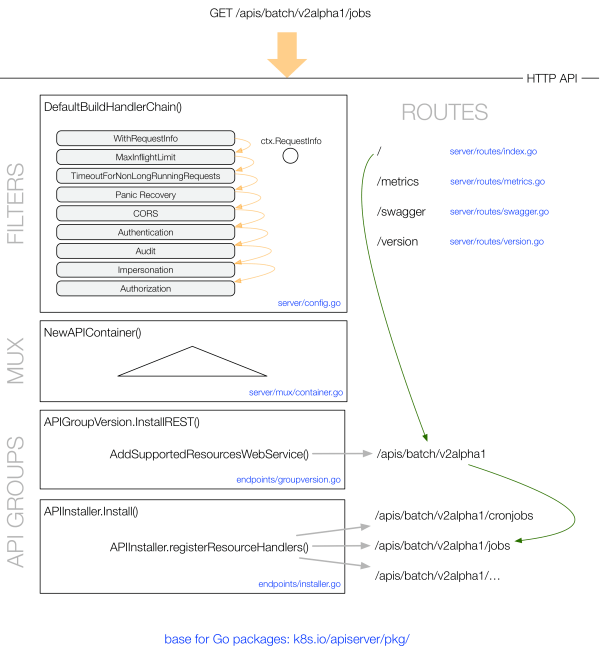 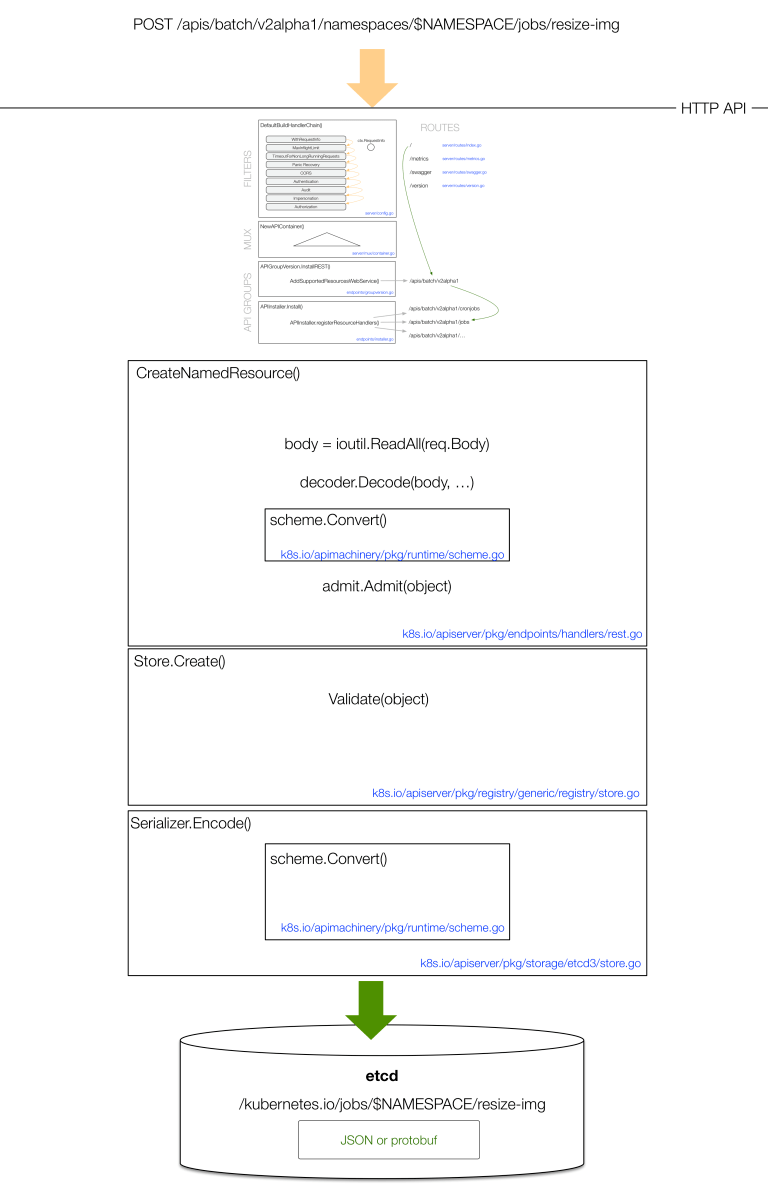 Most resources in kubernetes will have an internal version, because a resource may have multiple versions throughout the development process. e.g. a deployment will have extensions/v1beta1, apps/v1. To avoid problems, kube-apiserver has to know how to convert between each pair of versions (e.g., v1⇔v1alpha1, v1⇔v1beta1, v1beta1⇔v1alpha1). Therefore it uses a special internal version, which is a generic version that contains all the fields of the version and has the functionality of all versions. Decoder will first convert the creater object to internal version and then convert it to storage version, which is another version when stored in etcd.

When decoding, it first gets the expected version from the HTTP path, then uses scheme to create a matching empty object with the correct version, and uses a JSON or protobuf decoder to convert it, and in the first step of the conversion, if the user omits some fields, Decoder sets them to default values.

After the decoding is done, you need to check if the objects can be created or updated by verifying the global constraints of the cluster and setting the default values according to the cluster configuration. You can see all the global constraint plugins that kube-apiserver can use in the k8s.io/kubernetes/plugin/pkg/admission directory. kube-apiserver is started by setting the -enable-admission-plugins parameter to The plugins added via -ValidatingAdmissionWebhook or -MutatingAdmissionWebhook will also work here.

Mainly check the legality of the fields in the object.

After executing the above operations in the handler, the last operation related to etcd will be executed, and the POST operation will write the data to etcd. The main processing flow of the above in the handler is shown below.

The kube-apiserver consists of 3 components (Aggregator, KubeAPIServer, APIExtensionServer), which handle requests in turn through Delegation.

Aggregator forwards requests by associating APIServices objects to a Service, and the type of Service it is associated with further determines the form of request forwarding. Aggregator consists of a GenericAPIServer and a Controller that maintains its own state. The GenericAPIServer mainly handles requests for APIService resources under the apiregistration.k8s.io group.

Some additional components in kubernetes, such as metrics-server are extended by way of Aggregator, which can be used in a real environment by using apiserver-builder tool to easily create custom resources as Aggregator extensions.

The following configuration needs to be added to kube-apiserver to enable API Aggregation.

It enables services in and outside the cluster to manipulate resources in kubernetes through RESTful APIs.

The APIExtensionServer is the final layer of the Delegation chain and is the resource server that handles all the resources defined by users through the Custom Resource Definition.

The controllers included and their functions are shown below.

First, we analyze how kube-apiserver is started. kube-apiserver also starts the main logic through its Run method, and before the Run method is called, it parses command line parameters, sets default values, etc.

The main logic of the Run method is.

The server is initialized using the Delegation pattern, and the basic API Server, CustomResource, and Aggregator services are chained together through the DelegationTarget interface to provide services to the outside world.

The details of the legacyRESTStorageProvider.NewLegacyRESTStorage and m.GenericAPIServer.InstallLegacyAPIGroup methods will be continued in a later section.

The main processes of InstallAPIs and InstallLegacyAPI are similar, so we won’t go into them here for the sake of space.

AggregatorServer is mainly used for custom aggregation controllers to enable CRDs to be automatically registered to the cluster.

NewWithDelegate` is the method that initializes the aggregatorServer, the main logic is as follows.

The above is an analysis of the AggregatorServer initialization process, it can be seen that when creating APIExtensionsServer, KubeAPIServer and AggregatorServer, the pattern is similar, first call c.GenericConfig.New to initialize the Container according to the go- New to initialize the Container in go-restful mode, then create RESTStorage for the resources that need to be registered in the server, and finally register the APIGroup information of the resource to the route.

At this point, the process in CreateServerChain has been analyzed and the call chain is shown below.

serverPrepare.Run mainly completes the health check, survival check and OpenAPI route registration, and then continues to analyze the flow of prepared.Run, in which s.NonBlockingRun is called to complete the startup.

The main logic of s.NonBlockingRun is as follows.

As mentioned above, the backend data corresponding to the handler eventually implemented by apiserver is stored in a Store structure. Here, for example, the routes starting with /api are used to create the RESTStorage for each resource via the NewLegacyRESTStorage method. RESTStorage is a structure defined under k8s.io/apiserver/pkg/registry/generic/registry/store.go, which mainly contains NewFunc to return resource-specific information, NewListFunc to return resource-specific list and CreateStrategy for resource creation, UpdateStrategy for update, and DeleteStrategy for deletion. Inside NewLegacyRESTStorage, you can see the RESTStorage where multiple resources are created.

All resources under an API Group have their own REST implementation, and all groups under k8s.io/kubernetes/pkg/registry have a rest directory that stores the RESTStorage of the corresponding resources. In the NewLegacyRESTStorage method, the storage corresponding to each resource will be generated by NewREST or NewStorage, and the pod is used as an example here.

You can see that the different operations on the pod in the final returned object are all one REST object.

CompleteWithOptions` is mainly used to set some default values for the configuration in the store and to update the store based on the options provided, the main one being to initialize the backend storage instance of the store.

Within the CompleteWithOptions method, the options.RESTOptions.GetRESTOptions method is called, which eventually returns the generic.RESTOptions object, which contains some configuration for the etcd The generic.RESTOptions object contains some configuration for the initialization of etcd, data serialization methods, and a storage. The StorageWithCacher-->NewRawStorage-->Create method is called sequentially to create the final dependent backend storage.

In newETCD3Storage, the client of etcd is first created by calling newETCD3Client, and the client is finally created using the official etcd client tool clientv3.

At this point, the analysis of the construction of the store in the pod resource is basically completed, different resource corresponds to a REST object, which in turn references the genericregistry.Store object, and finally the initialization of the `genericregistry. After analyzing the initialization of the store there is another important step which is the registration of the route. The main process of route registration is to build an http path for the resource according to different verbs and to bind the path to the corresponding handler.

The call chain for m.GenericAPIServer.InstallLegacyAPIGroup is very deep and ends up registering handler and routing information for each API resource under the Group, which is: m.GenericAPIServer. InstallLegacyAPIGroup --> s.installAPIResources --> apiGroupVersion.InstallREST --> installer.Install --> a.registerResourceHandlers. Several of these methods work as shown below.

This method implements the conversion from rest.Storage to restful.Route. It first determines the REST interface supported by the API Resource, then adds the corresponding handler for the REST interface, and finally registers it with the route.

restfulCreateNamedResource is the handler for the POST operation, which will eventually be done by calling the createHandler method.

The createHandler is a method to write data to the backend storage, and there is a permission control for the operation of the resource, in the createHandler the decoder and admission operations will be executed first, then the create method will be called to complete the creation of the resource, in the create method, validate and finally save the data to the backend storage. The admit operation executes the admission-plugins in the kube-apiserver. The admission-plugins are initialized to the admissionChain in CreateKubeAPIServerConfig, and the initialization call chain is CreateKubeAPIServerConfig --> buildGenericConfig --> s.Admission.ApplyTo --> a.GenericAdmission.ApplyTo --> a.Plugins.NewFromPlugins, and finally in NewFromPlugins wraps all enabled plugins as admissionChain, and the admit operation to be performed here is the admit operation in admission-plugins.

All the operations in createHandler are the request process mentioned at the beginning of this article, as follows.

This article analyzes the startup process of kube-apiserver. kube-apiserver contains three servers, namely KubeAPIServer, APIExtensionsServer and AggregatorServer, which are connected together through the delegate mode. The initialization process is similar, first create the corresponding config for each server, then initialize the http server, the http server initialization process is to first initialize GoRestfulContainer, then install the API included in the server, when installing the API first create the corresponding backend storage RES for each API When installing the API, first create the corresponding back-end storage RESTStorage for each API Resource, then add the corresponding handler for each API Resource supported verbs, and register the handler to the route, and finally register the route to the webservice, the implementation process of the RESTFul API is the core of the startup process. The core of the startup process is the implementation of the RESTFul API. As for the implementation of filters such as authentication and authentication in kube-apiserver, multi-version resource conversion, kubernetes service implementation, and other details, we will continue to analyze them in later articles.