Linux often needs to check the system resources or hardware resources, and there are many command lines corresponding to it.

In this article, we will summarize and list the common query methods based on our experience for reference.

The following commands use Ubuntu 1804 and CentOS7 as the test platform.

The cat /proc/version command outputs the kernel version and the compiled gcc version.

The lsb_release -a command outputs release information, but Cent7OS does not include this command.

The cat /etc/redhat-release command is unique to the Redhat family.

The cat /etc/*release command is available in most Linux distributions and is the most convenient command to use.

The top command is the most common command used to check CPU usage, and is used as follows. 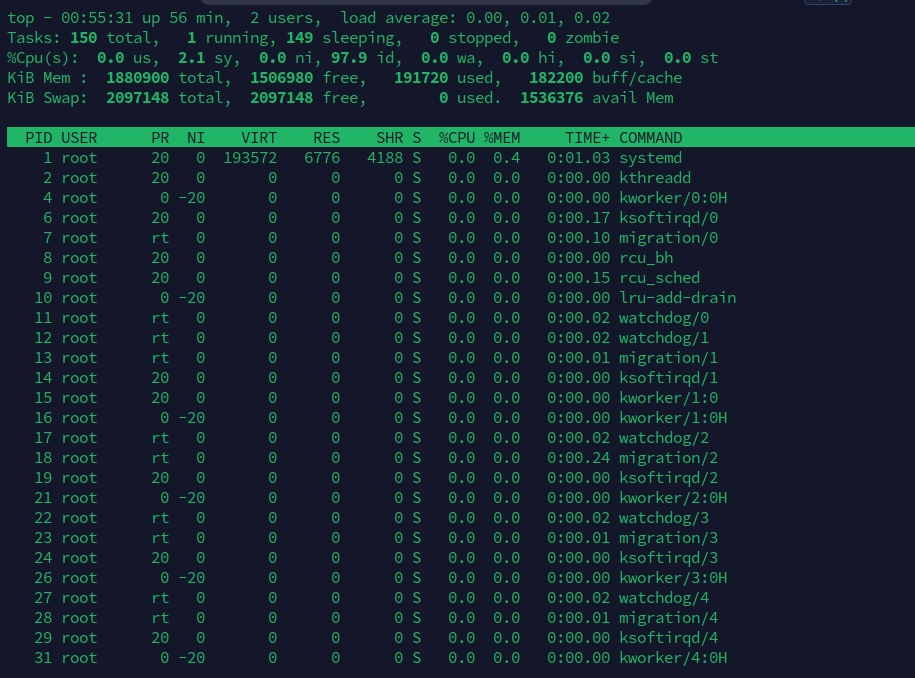 The htop command is a more concise display program than top. On some distributions, you need to install it yourself, and it works as follows. 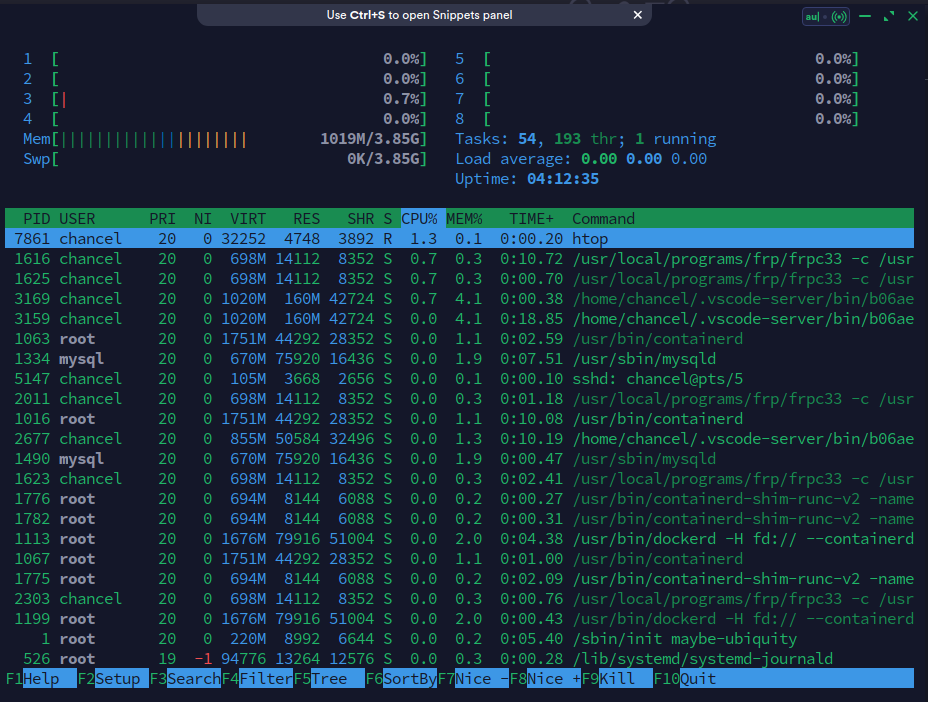 Compared with the use of top, the interface of htop is clearer and easier to understand, and there are hints on how to use it, which is more user-friendly.

Usually, htop needs to be installed by yourself.

glances is a resource viewer that goes a step further than htop.

Not only does it include the usual CPU and memory, but it even includes the current internet speed and hardware temperature data, which can be used as follows. 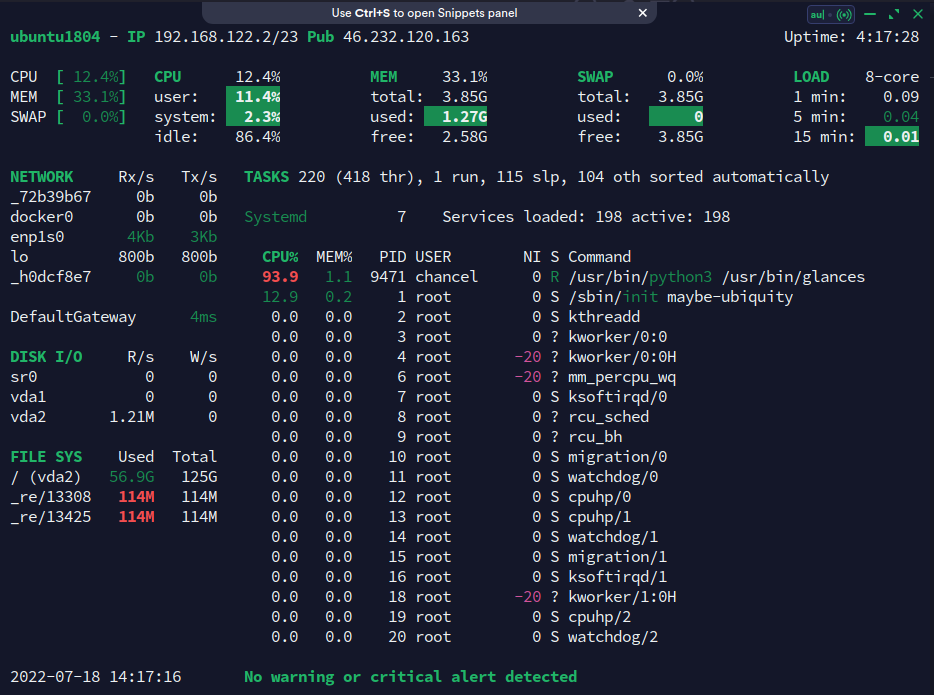 Normally, glances needs to be installed by yourself, and since it is developed using the Python language, it is also resource intensive.

The above 3 are my more commonly used system resource usage query tools, which are very sufficient in most cases.

Others may include nmon, vmstat, etc. If you are interested, you can also check them yourself.

df -h is usually used to query the hard disk resource usage (-h means use the file size unit of 1024 and easy to read display).

fdisk -l is used to query the physical partitions.

Of course, the fdisk command itself is still mainly used to manage hard disk partitions, and its management process is conversational, similar to the following.

Type m for help with the command, the creation process is very easy to understand

The mkfs.[format] command is used to format the hard disk, [format] stands for hard disk format, the common formats are as follows:

After a successful partition, it usually needs to be formatted, using mkfs.[format] /dev/[device_name] to format it.

ip is a commonly used tool for viewing network information, and was used in later Linux to replace ipconfig.

Common uses are as follows.

ip addr is usually used to set the network information of the NIC, for example.

ip link is usually used to control the behavior of the NIC, for example.

The former is used to query network ip information, and its output is as follows.

The latter is commonly used to plan routing requests, as follows.

Both lscpu and cat /proc/cpuinfo can output CPU information as follows.

Both lsmem and cat /proc/meminfo can output memory information as follows.

lsblk is used to view the hard disk information as follows.

lsusb is used to view the USB interface information as follows.

lspci is used to extract all the hardware information on the motherboard as follows.

If more detailed pci information is needed, you can use lspci -v or lspci -vv.

lspci is usually used in conjunction with grep to sift through hardware information, such as lspci | grep -i eth to view network interfaces.

The following commands can display system resources and hardware information more comprehensively than the above commands.

netstat is used to monitor tcp/ip connection information, and is often used to find the program occupying a certain port.

Using the -l parameter, you can display all the service programs that are listening to the port as follows.

The -p argument prints out the PID, but the ROOT user runs a program whose PID cannot be probed by a normal user, so it depends on the situation whether you need to use sudo or not.

netstat has a lot of advanced networking features, if you are interested, you can refer to man netstat to learn them.

In Linux, everything is a file.

lsof (list open files) is a tool that lists the current operating system’s open files, so lsof can do very many things.

Using lsof directly will show all the files that are currently open on the system, and since long-running operating systems have multiple processes, there are fewer operations that use lsof alone.

lsof is often used to query resource usage, for example.

lsof can be used in a wide range of scenarios, for example

The lshw command is commonly used to output a summary of the machine configuration, for example.

In addition to the optional html report, there are -json and -xml formats available.

The -short parameter allows you to view an abbreviated report, as follows.

The -class parameter allows you to view information about some of the specified hardware, as follows.

inxi is used to get all hardware and system information, as follows.

The -M parameter can be used to get information about the machine hardware brand.

The following parameters are available for obtaining individual hardware.

The following parameters are available for obtaining system resource information.

Below is more comprehensive, outputting information about the machine’s hardware and software.