C++ does not have a built-in set of reflection mechanisms, and implementing reflection mechanisms is a frequent topic of discussion in C++. Considering C++ has a strong meta-template coding capability, it is accurate to say that C++ is somewhat introspective during compilation, provides some is_xxx function collections and template extraction capabilities, but does not support dynamic reflection because it does not have a runtime environment like Java/Go languages, and is very weak and difficult to use during compilation.

There are a number of open source third-party reflection libraries for C++, and they are implemented in one of two ways.

Some time ago, I was trying to locate a problem with a C++ product (20 years old), and I found that there was a shadow of runtime reflection in the code, but the code did not refine the concept of reflection, and the code was fragmented.

Configuration management is the most commonly used capability in each system. The case code is configuration client code where the client interacts with the configuration center and needs to support the following minimum functions.

Seems like a very simple requirement, but when all business-level configuration items of the product are managed through it, the configuration data is large, plus some quality attributes (real-time change notification, full synchronization within seconds) the requirements are different, or look at the code first. To simplify the problem statement, the code implementation has been heavily streamlined (the original code implementation is too complex) to restore the most original design ideas. 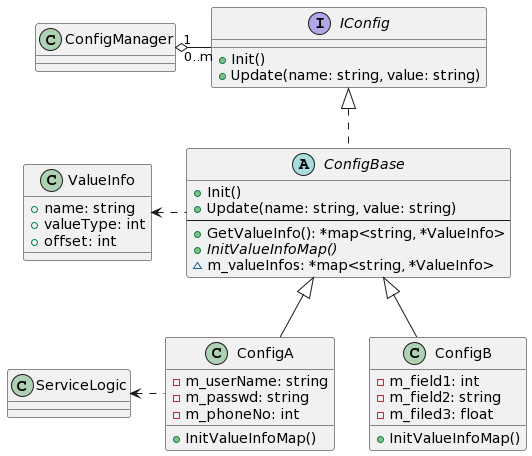 Design of the above class diagram.

We can still see his original design intent.

The question is how to update the configuration value to the corresponding member variable by getting the configuration definition? In reality, there is also the problem of multi-threaded concurrency, assuming that there is only one thread processing the business logic and the configuration update at the same time. If it is a Java language, it is easy to update the values through reflection. The original authors took advantage of the memory layout feature of C++ objects, as seen in the implementation of the InitValueInfoMap method of each class.

ValueInfo.offset is a record of the offset of each configuration item (member variable) to the IConfig pointer.

At this point we have probably figured out that this is actually dynamic reflection, registering first, and then assigning values to member variable addresses based on the registration information. When ConfigManager receives the configuration change, it calculates the address of the member variable of the subclass by the offset of the variable in the base class, and then assigns the value.

Another question is why not record the member address pointer directly instead of the offset? It should still be for performance, ConfigA class can have multiple object instances, and no matter how many instances, according to the memory layout it is known that the offset of member variables will not change. The actual code of ConfigBase::m_valueInfos is defined as a member variable of the class (not static), but it points to a static global variable in ConfigBase.cpp, which should be designed to record the member address pointer at the earliest, and the performance optimization is to record the offset later. And also note in the code that the InitValueInfoMap method only needs to be called once, and performance is reduced from X seconds to XX milliseconds.

Suppose there is a structure Point { int x; int y; } and the method to get the offset of member variables is as follows.

To further understand the memory layout of C++ objects, it is recommended to read “Exploring C++ Object Model in Depth”. Especially when it comes to considering functions, considering inheritance, multiple inheritance combination is too complicated. Back to the case above, calculating the offset relative to the base class (interface) with address translation is hard to understand, and bare pointer operations can be risky.

Some open source implementations of runtime reflection, which are implemented in a similar way, mainly depending on the completeness of its implementation are.

Let’s look at the first open source, using the sample example below. See the code is not feeling with the case of the type of code ideas, but the case of the management of properties rubbed in the code of the configuration class, without extracting a simple class property management framework.

These open source libraries they have a common feature: there is a container or registration manager for the registration and storage of various information about the type.

Starting from C++11, some Attributes are added, which are used to give the compiler some extra information to generate some optimization or specific code, and also to give some hints to other developers. For example.

Unfortunately, these are only for compiler use, C++ does not have a runtime environment, and it is not possible to use them at runtime, like Java’s Annotion and Go’s Tag. But the takeaway for us is that it is also possible to define Attribute for some methods or member variables, and let the compiler generate code with the corresponding metadata information that can be used at runtime.

The custom Attribute needs to be interpreted by the compiler based on it, and after a search, Github does have an interpreted wrapper library for C++ ASTs cppast and can be used with Clang.

Static reflection was also proposed to the C++ standards organization in 2014 Static reflection, and after a preliminary review of the documentation, the technical specifications are defined in Chapter 4 :

In this paper, we have understood the author’s design intent by reducing the original design of configuration management, which makes use of C++ member variable offsets to facilitate uniform update operations on configuration items. This leads to a walk-through of the C++ reflection mechanism, taking a look at runtime and compile-time reflection. If you are thinking about a reflection framework, you can take a look.