The plan9 assembly operand direction is the opposite of the intel assembly direction, plan9 is left to right and intel is right to left.

In plan9, there is no PUSH POP instruction for stack operation, but SUB and ADD respectively.

The commands starting with MOV are used to move data, and the amount of data that can be moved at one time varies with the variety of commands provided.

The jump instruction is the key to switch the flow of program execution.

plan9 assembly uses num to represent constants, which can be negative, the default is decimal and can be used in the form of 0x123 for hexadecimal

Variables in assembly are generally read-only values stored in .rodata or .data segments. This corresponds to global const and var variables/constants that have been initialized at the application level.

Go assembly introduces 4 pseudo-registers PC, FP, SP, SB to simplify the writing of assembly code, plus other general registers which are the Go assembly language’s re-abstraction of the CPU.

Take AMD64 environment as an example, the purpose of each register is explained

1. How can I view the Go assembly code?

For those who want to learn Go assembly language, we can look through the Go source code, which has a lot of assembly examples in practice. In addition, we can also analyze the compiled code of our Go programs through disassembly and other means to understand some underlying mechanisms and principles.

Here are some commands to get the compiled code.

2. What do framesize and argsize mean when they are specified in an assembly function? 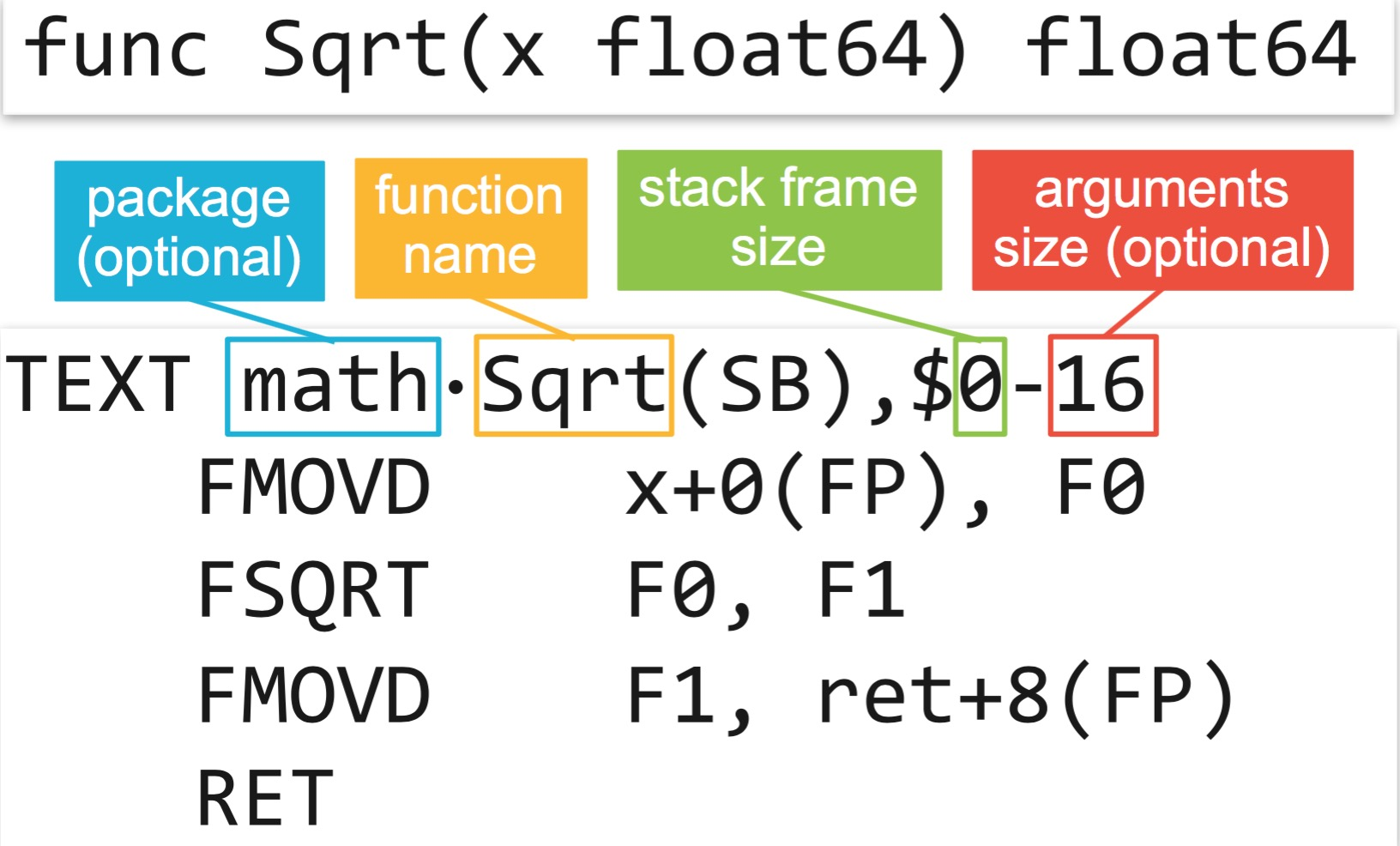 3. How to distinguish between true and false registers?

4. The relationship between FP and SP registers in AMD64 environment?

5. What happens to the stack frame during the function call?

In Go’s assembly, there are many unique pseudo-registers to help users quickly locate the corresponding hardware registers, global variables, functions, concurrent procedures, etc., which is really convenient. On the other hand, if you don’t understand the mechanism and stack layout of these pseudo-registers in Go, you will have a hard time.

For writing and learning Go assembly, many register operations are transparent, and we should focus on the layout of return parameters, input parameters, and local variables on the stack frame in function calls. The compiled assembly instructions will also be converted to true SP registers, and there are no pseudo registers.

The others, pseudo PC, pseudo SB registers, pseudo TLS registers, etc., can be understood as long as they exist. bp registers, although they have a low presence, are still useful for understanding the layout of function stacks.