Multiple different schedulers are allowed to run in a kubernetes cluster, and it is also possible to specify different schedulers for Pods to be scheduled. This is not mentioned in the general Kubernetes scheduling tutorials, which means that the kubernetes scheduling feature is not actually fully used for affinity, taint, and other policies. Some of the scheduling plugins mentioned in previous articles, such as port-occupancy based scheduling NodePorts and other policies are generally not used, and this section is about This section explains this part, which is also used as a basis for extending the scheduler.

Notes: -kubeconfig and -config cannot be specified at the same time, if -config is specified, the other parameters will be invalid.

The following configuration is an example of the section on configuring extension points, which can be explained in the scheduling context section of the official kubernetes documentation.

Notes: If name="*", in this case all plugins corresponding to the extension point will be disabled/enabled

Since kubernetes provides multiple schedulers, it is natural for profiles to support multiple profiles, and profiles are also in the form of lists, so just specify multiple configuration lists. Here is an example of multiple profiles, where multiple extension points can also be configured for each scheduler if they exist.

kube-scheduler provides a number of plugins as scheduling methods by default, which are enabled by default without configuration, such as

When first thinking about writing a scheduler, it’s common to think that extending kube-scheduler is a very difficult task, something that kubernetes has officially thought about for a long time. kubernetes introduced the concept of frameworks in version 1.15 to make scheduler more scalable.

The framework works by redefining each extension point to be used as plugins and supporting users to register out of tree extensions so that they can be registered to kube-scheduler, and these steps are analyzed below.

The scheduler allows for customization, but for that you only need to reference the corresponding NewSchedulerCommand and implement the logic of your own plugins.

The NewSchedulerCommand allows injecting out of tree plugins, i.e. injecting external custom plugins, in which case there is no need to define a scheduler by modifying the source code, but simply by implementing a custom scheduler by itself.

For the plug-in implementation just need to implement the corresponding extension point interface. The following is an analysis of the built-in plug-ins

For the built-in plug-in NodeAffinity, we can see by looking at its structure that the implementation of the plug-in is to implement the corresponding extension point abstraction interface can be. 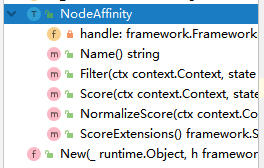 where framework.FrameworkHandle is provided for calls between the Kubernetes API and scheduler, as you can see by the structure contains lister, informer, etc. This parameter is also required to be implemented.

Finally, after implementing a New function to provide a way to register this extension. This New function can be injected into scheduler as out of tree plugins in main.go.

Having read above about how to extend the scheduler plug-in, the following experiment will complete a traffic-based scheduling, usually the network traffic used by a Node over a period of time is also used as a very common situation in production environments. For example, in multiple hosts with balanced configurations, Host A runs as a script that pulls transaction data and Host B runs as an ordinary service. Because pulling transaction data requires downloading a large amount of data while the hardware resources are occupied by very little, at this time, if a Pod is dispatched to this node, then both sides’ business may be affected (the front-end agent feels that this node with few connections will be dispatched in large numbers, while the script pulling transaction data reduces its effectiveness because of the network bandwidth occupation).

The experiment is roughly divided into the following steps.

The experiment will be modeled after the built-in plugin nodeaffinity to complete the code, why choose this plugin, just because it is relatively simple and basically the same as our experimental purpose, in fact, other plugins are also the same effect.

The code for the whole experiment is uploaded to github.com/CylonChau/customScheduler.

Start of the experiment

When initializing the project, go mod tidy and other operations, you will encounter a large number of the following errors

The problem is mentioned in kubernetes issue #79384, but a cursory glance at it does not explain why the problem occurs, and at the bottom there is a script provided by a person who runs it directly when the above problem cannot be solved.

The above description shows that defining a plugin only requires the implementation of the corresponding extension point abstraction interface, then you can initialize the project directory pkg/networtraffic/networktraffice.go.

Define the plugin name and variables.

Define the structure of the plug-in.

The next step is to normalize the result, which brings us back to the execution of the extension point in the scheduling framework. As you can see from the source code, the Score extension point needs to implement more than just this single method.

The above code shows that to implement Score you must implement ScoreExtensions, or return it directly if you don’t. And according to the example in nodeaffinity, this method only returns the extension object itself, while the specific normalization, that is, the actual scoring operation, is in NormalizeScore.

And in the scheduling framework, the method that actually performs the operation is also NormalizeScore().

Here is the implementation of the corresponding method

In NormalizeScore need to implement a specific algorithm for selecting node, because the interval of scoring results for node is $[0,100]$, so the formula of the algorithm implemented here will be $Maximum Score - (Current Bandwidth / Maximum Maximum Bandwidth ∗ 100)$, so as to ensure that, the larger the bandwidth occupation of the machine, the lower the score.

Notes: The maximum number of nodes in kubernetes supports 5000, so wouldn’t the loop take up a lot of performance when getting the maximum score, but there is no need to worry. scheduler provides a parameter percentageOfNodesToScore . This parameter determines the number of this deployment loop. More details can be found in the official documentation for this section.

In order for the plugin to be used when registering, you also need to configure a name for it.

defines the parameters to be passed in

There is also a prometheusHandle in the network plugin extension, this is the action that operates the prometheus-server to get the indicator.

First you need to define a PrometheusHandle structure.

With the structure comes the need for query actions and metrics, and for metrics, node_network_receive_bytes_total is used here as the calculation to get the network traffic of the Node. Since the environment is deployed outside the cluster, there is no hostname of the node, and it is obtained through promQL, the whole statement is as follows.

The entire Prometheus section is as follows.

Parameters for configuring the scheduler

Since it is necessary to specify the address of prometheus, the name of the NIC, and the size of the data to be fetched, the whole structure is as follows; in addition, the parameter structure must follow the <Plugin Name>Args format of the name.

One is the old version that provides framework.DecodeInto function to do this.

Another way is to have to implement the corresponding deep copy method, such as NodeLabelArgs in NodeLabel.

Finally register it to register, the whole behavior is similar to extending APIServer.

Notes: For generating deep copy functions and other files, you can use the script kubernetes/hack/update-codegen.sh in the kubernetes codebase.

The framework.DecodeInto method is used here for convenience.

Preparing the scheduler’s profile, you can see that the parameters that we customized can then be recognized as the KubeSchedulerConfiguration resource type.

If it needs to be deployed inside a cluster, it can be built as an IMAGE.

List of resources required to deploy inside the cluster.

Start the custom scheduler, here via a simple binary, so a kubeconfig is needed for the authentication file.

Prepare a Pod to be deployed, specifying the name of the scheduler to be used.

The experimental environment here is a 2-node kubernetes cluster, master and node01, because master has more services than node01, and in this case the scheduling result will always be scheduled to node01 no matter what.

And the log of the scheduler is as follows.