SSH is probably standard on every Linux machine. After writing code for a day job, programmers rarely deploy tests directly on the local machine, and often need to log in to a remote Linux host via SSH for verification. In fact, SSH has many functions, not just remote login, so today we will discuss the SSH protocol and its advanced features in detail.

SSH is a network protocol for encrypted logins between computers, which means that such logins are secure. SSH is secure because it is based on asymmetric encryption, and the basic process can be described as follows.

To be honest, the SSH protocol itself cannot prevent this form of attack, and it is ultimately up to the end user to identify and avoid the risk.

For example, the first time we log in to one of the remote hosts, we get the following prompt.

The exact decision depends on the end-user, so the recommended practice is to save the public key of the remote host in a suitable place for easy verification.

Next, if the user decides to accept the returned public key, the system will continue to prompt as follows.

To generate a public-private key pair on the client side, generally use the ssh-keygen tool. For example, we want to generate 2048 bit asymmetric encryption key pair.

If the key pair is used for SSH, it is customary to name the private key id_rsa and the corresponding public key id_rsa.pub, which can then be appended to the remote host’s trusted .ssh/authorized_key file using the ssh-copy-id command: $ ssh-copy-id user @remote-host

Sometimes after executing the above command, the client still can’t log in to the remote host, most likely the remote host has disabled the public key login, please check the /etc/ssh/sshd_config file of the remote host and make sure the comment # is removed in front of the following lines.

After saving, you need to restart the SSH service.

From the previous introduction, we know that SSH automatically encrypts and decrypts network communication data between the client and the remote host. This feature is sometimes useful for other TCP network applications to create an encrypted channel to transfer network data through SSH, and this is where SSH port forwarding comes in. In fact, upper layer applications such as Telnet, SMTP, LDAP, etc. can benefit from this. If you are working in an environment where the firewall restricts the use of some network ports but allows SSH connections, it is possible to use SSH protocol to communicate by forwarding TCP ports. 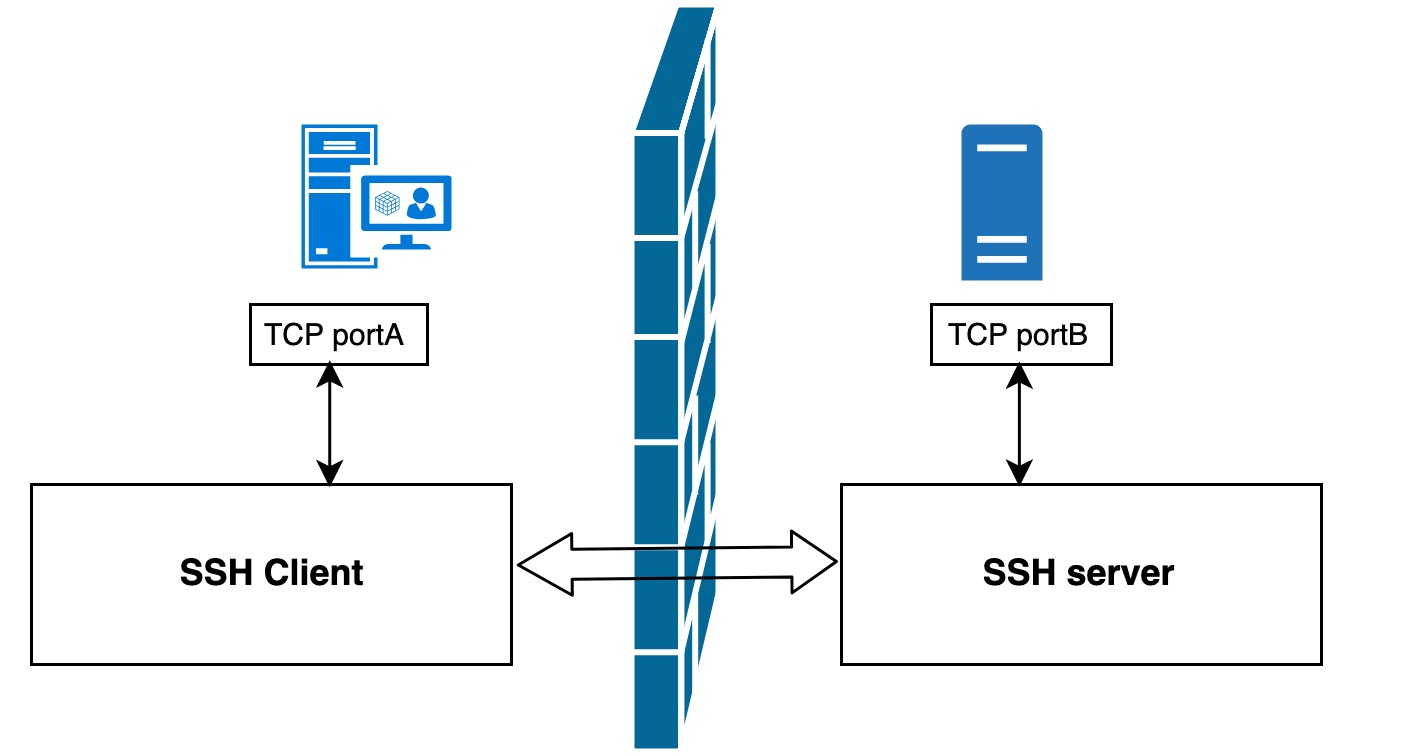 As shown above, with SSH port forwarding, instead of communicating directly between TCP ports A and B, TCP ports A and B are forwarded to SSH clients and servers for indirect communication, which automatically encrypts data and bypasses firewall restrictions at the same time.

The basic format of the SSH local forwarding command is as follows.

Using the role of local forwarding, we can execute the following command on the remote login host. 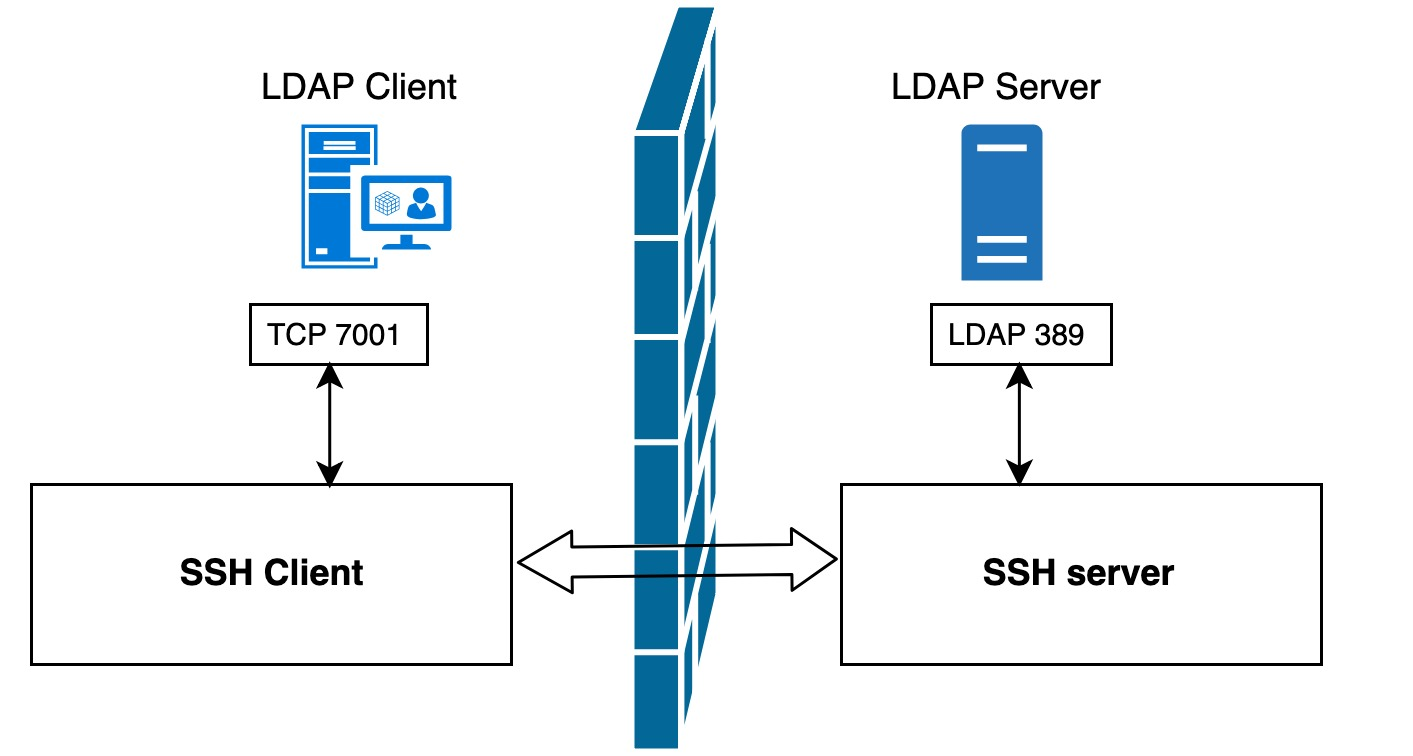 Note: In this example, we chose port 7001 as the local listening port. When choosing the port number, you should note that non-administrators do not have the right to bind to ports 1-1023, so it is better to choose an unoccupied port between 1024-65535.

Then we can configure the application on the remote machine directly to port 7001 on the local machine (instead of port 389 on the LDAP server). The subsequent data flow transfer will look like the following.

As you can see, this whole process application does not connect directly to the LDAP server, but to a local listening port, and SSH port forwarding does all the rest, encryption, forwarding, decryption, etc.

There are a few more things to note here.

The basic format of the SSH remote forwarding command is as follows.

For example, suppose we cannot connect directly from the LDAP client host to the LDAP server using SSH due to network or firewall reasons, but reverse connections are allowed, then we can access the LADP server through remote port forwarding. Simply execute the following command on the LDAP server host. 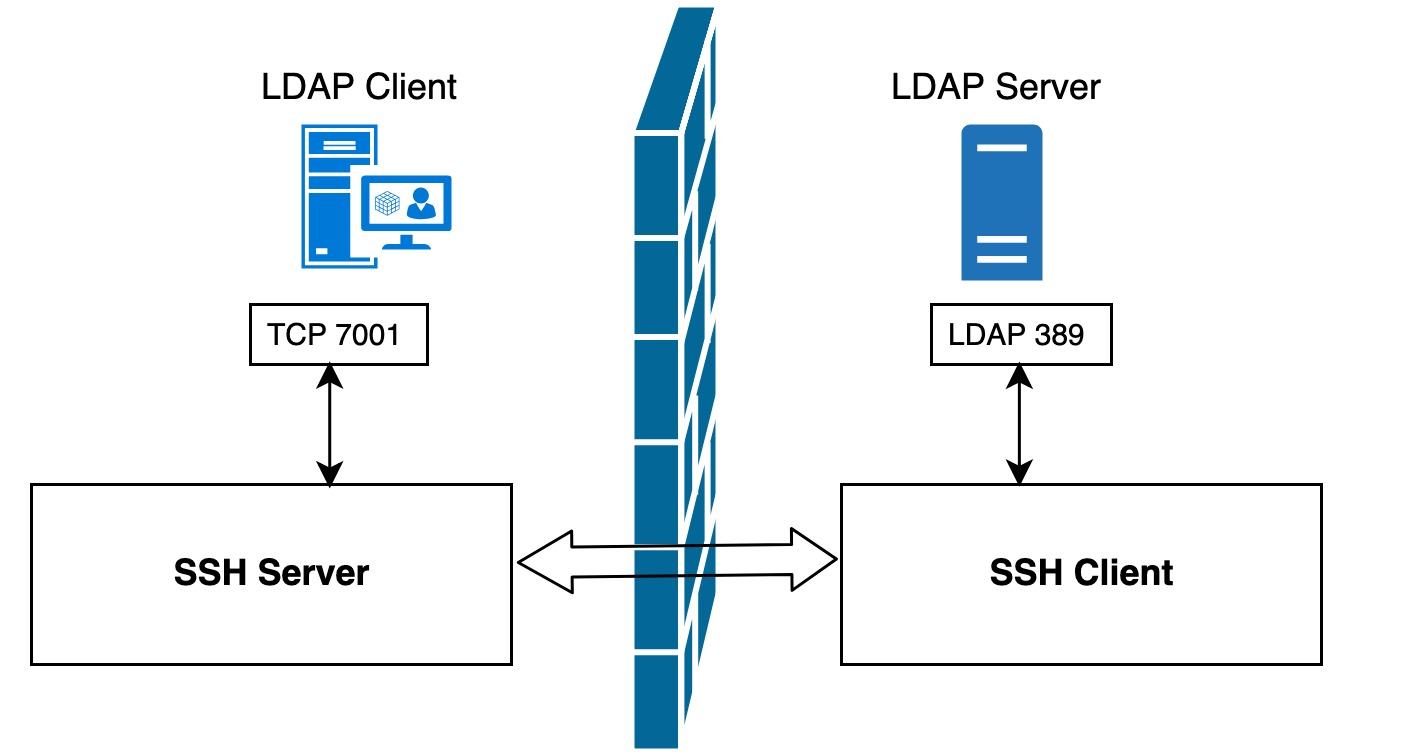 As you can see, compared with local port forwarding, this time only the location of the SSH server and SSH client are switched, but the data flow transmission path is still exactly the same: the application on the LDAP client host sends the data to the local port 7001, and the local SSH server encrypts the data received on port 7001 and forwards it through the SSH tunnel to the The SSH client will decrypt the received data and forward it to the 389 port of the listening LDAP service, and finally return the reply message from LDAP to complete the whole process.

The answer is yes! For example, we have four machines (HostA, HostB, HostC, HostD), where HostA wants to access the LDAP service on HostD, but due to network limitations, HostA can not directly access HostD, but HostA can access HostB, HostB can also SSH to HostC, HostC can directly HostC can directly connect to HostD. How to let HostA access HostD’s LDAP service through SSH port forwarding? We just need to perform local port forwarding on HostB. 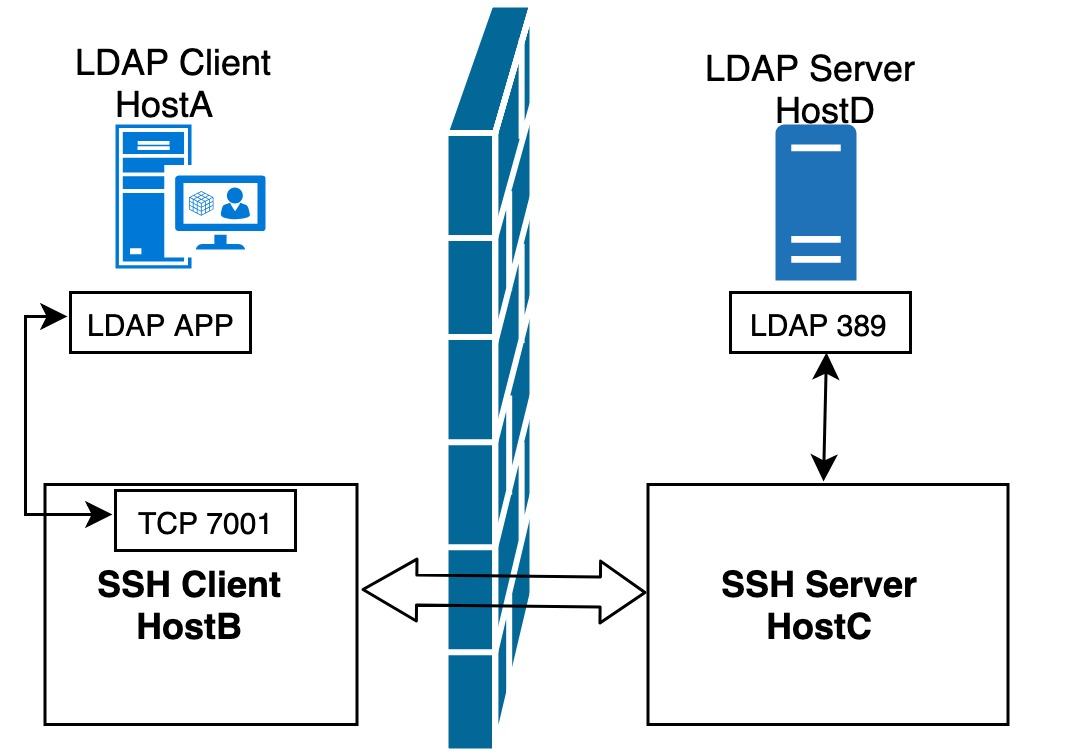 In this way, application client HostA can access the LDAP service of HostD by accessing the 7001 port of HostB. Note that we specify the -g parameter in the command to ensure that HostA can use the local port forwarding established by HostB.

For example, after executing the following command on the local machine, SSH will create a SOCKS proxy server for us, and all data sent to the local 8888 port will be forwarded to the remote host. Next, we can set the SOCKS proxy directly in the browser: localhost:8888, so that websites that are not accessible on the local machine can now be accessed normally through the remote host proxy. 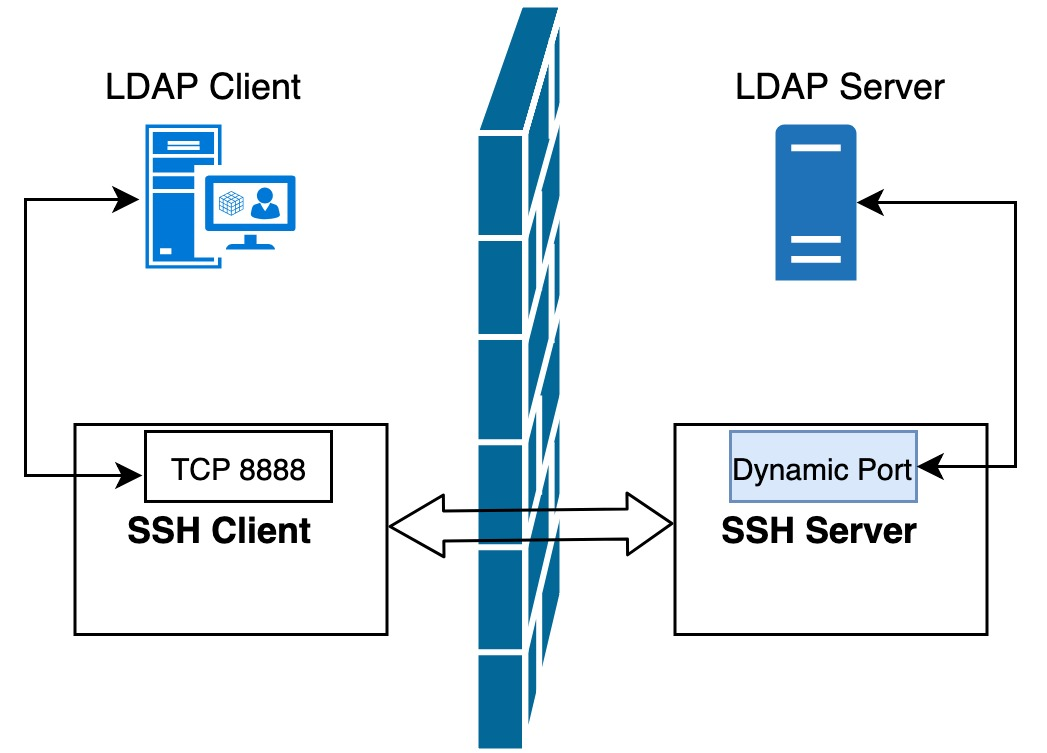 SSH port forwarding has some other very useful parameters.

In addition, SSH also supports other forms of port forwarding, such as port forwarding for GUI applications that support the X protocol, which will not be described in detail here.