The cgroup presented in this article is based on the v1 version.

systemd is the newest init system in linux, and its main design goal is to overcome the inherent shortcomings of its predecessor, sysvinit, and increase the speed of the system boot. Although in our daily work we only know systemd in systemctl start/stop /, systemd is actually very powerful and complex, providing a lot of basic functions such as cgroups management, automounting, logging services, etc. 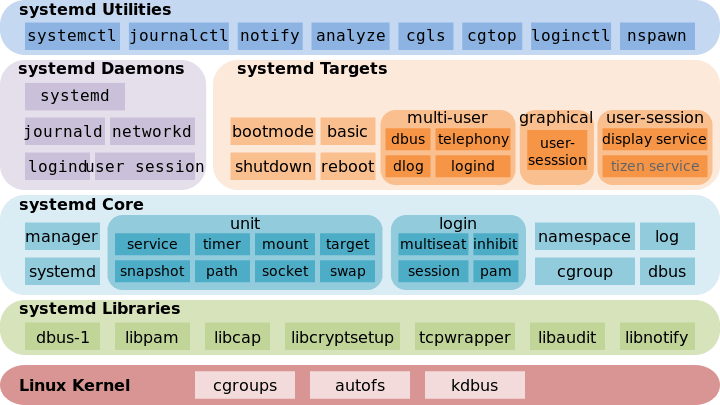 During system initialization systemd needs to handle a lot of work, such as mounting the file system, starting the ssh service, etc. To facilitate the management of these steps, the configuration unit unit is introduced into systemd.

Each unit has a corresponding configuration file, usually named xxxx.<unit-type>, which you can place in the system directory in /etc/systemd/ and /usr/lib/systemd/.

The following documentation is provided by systemd man for reference.

The user can open the corresponding documentation in the Linux environment by using the man command, for example, through man systemd.timer we can query the specific configuration information of the timer unit.

To describe the relationship between cgroup and systemd, let’s briefly review a few concepts in cgroup.

Hierarchy is a confusing concept in the above abstraction, and the Redhat CGroup Handbook compares cgroups to Linux Process, which gives us a better sense of how CGroups are organized.

In the Linux process model, each process is derived from the init process and may also derive its own child processes, which inherit environment variables and other attributes from the parent process. All processes form a “process tree”, with the init process at the root and all other processes as a node in the tree. cgroups are organized similarly to the Linux process model, with a “cgroup tree” in which Each node in the tree is a Controller Group, and the child control groups inherit the properties of the parent node, which we call the “cgroup tree” in the system Hierarchy. In cgroup v1, there may be multiple Hierarchy in the system, and each Hierarchy is bound to one or more Subsystems, and users can create control groups in these Hierarchy, and add tasks to the control groups to achieve resource restrictions.

When the Linux init system evolved to systemd, systemd merged with cgroups. systemd implements resource management for service.unit and scope.unit through the power of cgroups.

During the boot phase, systemd creates the following default Hierarchy for the system.

The default Hierarchy is all mounted in the /sys/fs/cgroup directory. All Hierarchy except systemd are associated with one or more subsystems. systemd is a special Hierarchy that does not mount any subsystem.

With systemd slice all units form a tree, and when the user needs to restrict the resources of a unit, systemd takes the tree structure of /sys/fs/cgroup/systemd into the default Hierarchy where the corresponding subsystem is mounted, and modifies the corresponding parameters.

By default, systemd creates the following slice, where -.slice is the node and all other slices inherit from -.slice and manage different types of processes.

Users can create a custom slice by creating it in the following directory.

As an example, the user can use the systemd-run command to quickly place the top -b process into the specified slice location by creating the following structure.

Of course we can also create slice by means of a configuration file, referring to the system.slice created by default, configured as follows.