As a small company, our infrastructure is not complete enough, the project manager informed us in the mid-autumn festival that our system will be on the second-to-last stage environment and production environment in the near future, so from the consideration of the deployment efficiency of the operation and maintenance staff, we urgently developed a one-click installation script generation tool, so that the operation and maintenance staff can use the tool combined with the actual target environment to generate a one-click installation script, the principle of this tool is very simple, as shown in the following diagram.

As you can see from the image above, our tool is based on a template to customize the final configuration and installation script.

The two files in the custom directory that store the customized configuration are closely related to the target environment .

When it comes to templates, the first thing that comes to Gopher’s mind is the Go text/template technique, which uses template syntax to write template configuration files in the templates directory above. However, text/template requires us to identify all the variables that need to be customized in advance, which is a bit too much and not flexible enough.

So what other technical solutions can we use? I finally chose the yaml file merging (including overwriting and appending) scheme , which is schematically shown below. 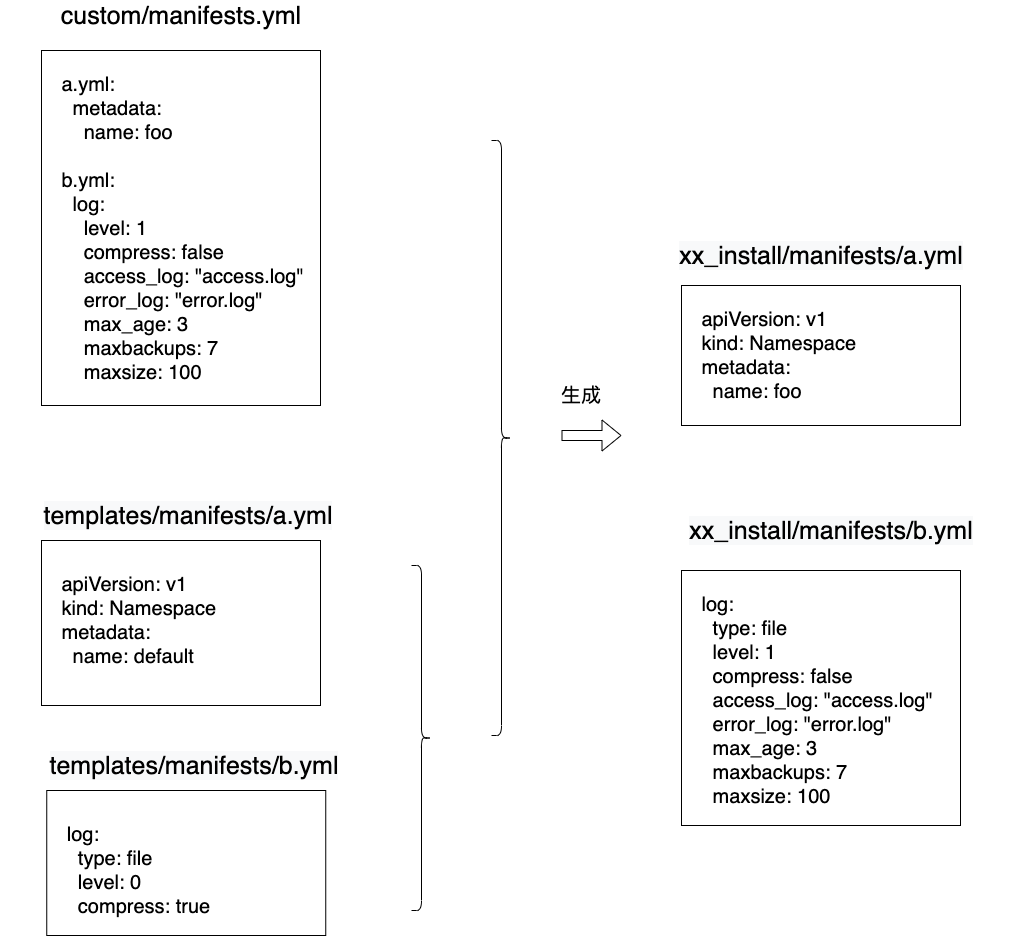 Take templates/manifests/a.yml as an example. The default value of metadata.name in this template is default, but the operations staff customizes (customizing) the custom/manifests.yml file according to the target environment. In this file, a.yml file name as the value of the key, and then the full path of the configuration items to be overridden configured into the file (here the full path is metadata.name).

The change to namespace name in the custom/manifests.yml file, foo, will override default in the original template, which will be reflected in the final xx_install/manifests/a.yml.

Here there are only three sub-configurations under log: type, level and compress.

And the operation and maintenance staff in custom/manifests.yml for log added several other kinds of configuration, such as access_log, error_log, etc..

Thus, except for level and compress which will overwrite the values in the original template, the rest of the added configuration will be appended to the generated xx_install/manifests/b.yml will be reflected.

OK! The solution is determined, so how to implement the merging of yaml files?

The Go community’s yaml package is best known as https://github.com/go-yaml/yaml. This package implements the YAML 1.2 specification, which facilitates marshal and unmarshal between Yaml and go struct.

However, the interface provided by the yaml package is rather rudimentary, and to merge yaml files, you need to do more extra work yourself, which we don’t have time for anymore. So is there a ready-to-use tool? The answer is yes, and it’s the Go community’s famous viper!

Then we’ll implement a set of merge (overwrite and append) operations ourselves!

Let’s start by looking at the main function that drives merge.

We see that the main package uses the standard library flag package to create two command line arguments -s and -d, which represent the source path where templates/custom is stored and the target path where the generated files are stored, respectively. After entering the main function, we first create manifests and conf directories under the target path to store the relevant configuration files respectively (in this case, no files are generated under the conf directory).

Then the main function calls mergeManifestsFiles to merge the yml files in templates/manifests under the source path with custom/manifests.yml.

We see that mergeManifestsFiles iterates through the template files and calls mergeConfig, the function that actually does the yml file merge, once for each file.

Compile and run the generator tool.

With the default command line arguments, the files are generated in the k8s-install path, so let’s take a look at the generated files.

We see that the results of merge are consistent with our expectations (it does not matter if the order of the fields is inconsistent, this is related to the use of go map when storing key-value inside viper, the traversal order of go map is random).

But careful people may find a problem: that is, the original apiVersion in a.yml in the results file became lowercase apiversion, which will cause a.yml in the submission to k8s when the verification failed!

Why is this so? The official explanation given by viper is as follows.

Viper merges configuration from various sources, many of which are either case insensitive or uses different casing than the rest of the sources (eg. env vars). In order to provide the best experience when using multiple sources, the decision has been made to make all keys case insensitive.

There has been several attempts to implement case sensitivity, but unfortunately it’s not that trivial. We might take a stab at implementing it in Viper v2, but despite the initial noise, it does not seem to be requested that much.

Well, since it’s official that it might be supported in v2, but v2 is out of reach, let’s use the fork version of viper to solve the problem! The developer lnashier has forked a viper code and fixed the problem due to this case problem, although it is rather old (and may not be comprehensive), but it can meet our requirements! Let’s try replacing spf13/viper with lnashier/viper, and rebuild and execute generator.

We see that after replacing it with lnashier/viper, the key apiVersion in a.yml is not changed to lowercase anymore.

The tool basically works now. But is this tool problem-free? Unfortunately not! The generator generates the wrong file when it faces the following two forms of configuration files.

These two problems are a bit tricky, and lnashier/viper can’t solve them. I can only fork lnashier/viper to bigwhite/viper to solve this problem by myself, and the configuration form like d.yml is very specific and not universal, so bigwhite/viper is not universal, so I won’t go into details here, you can read the code (commit diff) by yourself if you are interested to see how to solve the above problem.

The code covered in this article can be downloaded from here.