In the era of mobile Internet, the scale of business systems that directly face C-user is generally very large, and the machine resources consumed by the system are also very considerable. The number of CPU cores and memory used by the system are consuming the company’s real money. Minimizing the resource consumption of single service instance without decreasing the service level, which is commonly known as “eating less grass and producing more milk”, has always been the goal of the operators of each company, and some companies can save hundreds of thousands of dollars per year by reducing the number of CPU cores used by 1%.

With the same choice of programming language, it is important to continuously reduce the consumption of service resources. It is more natural and straightforward to rely on developers to continuously polish the performance of their code on the one hand, and on the compilers of the programming language to improve the results in terms of compilation optimization on the other. However, these two aspects are also complementary, if developers can understand the compiler optimization scenarios and tools more thoroughly, they can write more friendly code for compilation optimization, and thus obtain better performance optimization results.

The Go core team has been continuously investing in Go compiler optimization and has achieved good results, although there is still a lot of room compared to the code optimization power of the old GCC and llvm. In a recent article, “The Road of bytedance Large-scale Microservice Language Development”, it is also mentioned that bytedance internal Go compiler inline optimization (the most profitable change) has been modified, so that the Go code of bytedance internal service has been given more opportunities for optimization, which has achieved 10-20% performance improvement of online service and memory resource usage drop, saving roughly 100,000 cores.

Let’s start by understanding what inline optimization is.

1. What is compiler inlining optimization

inlining is a common optimization tool used by programming language compilers for functions, also known as function inlining. If a function F supports inlining, it means that the compiler can replace the code that makes a call to the function F with the function body/function definition of F to eliminate the extra overhead caused by the function call, a process shown in the figure below. 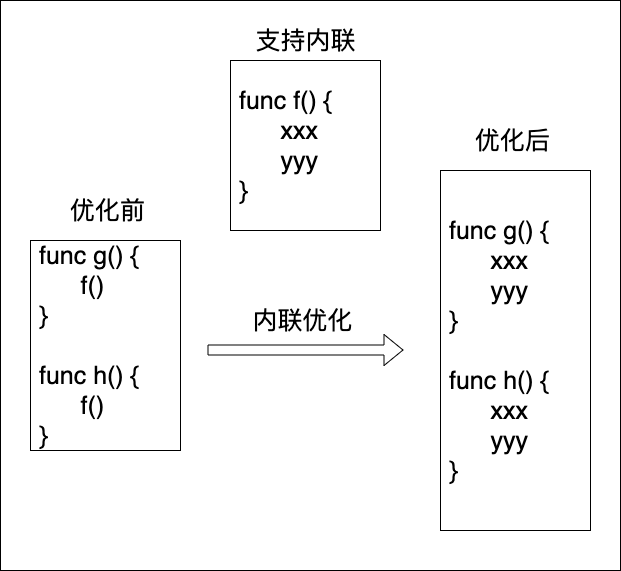 We know that Go has only changed to a register-based calling statute since version 1.17. Previous versions have been based on passing arguments and return values on the stack, and the overhead of function calls is much higher, in which case the effect of inline optimization is more significant.

Let’s look at a simple example. A simple benchmark also shows the performance difference between inline and non-inline add.

2. The “Overhead” of Inline Optimization

As with all static language compilers, the Go compilation process is roughly divided into the following stages. 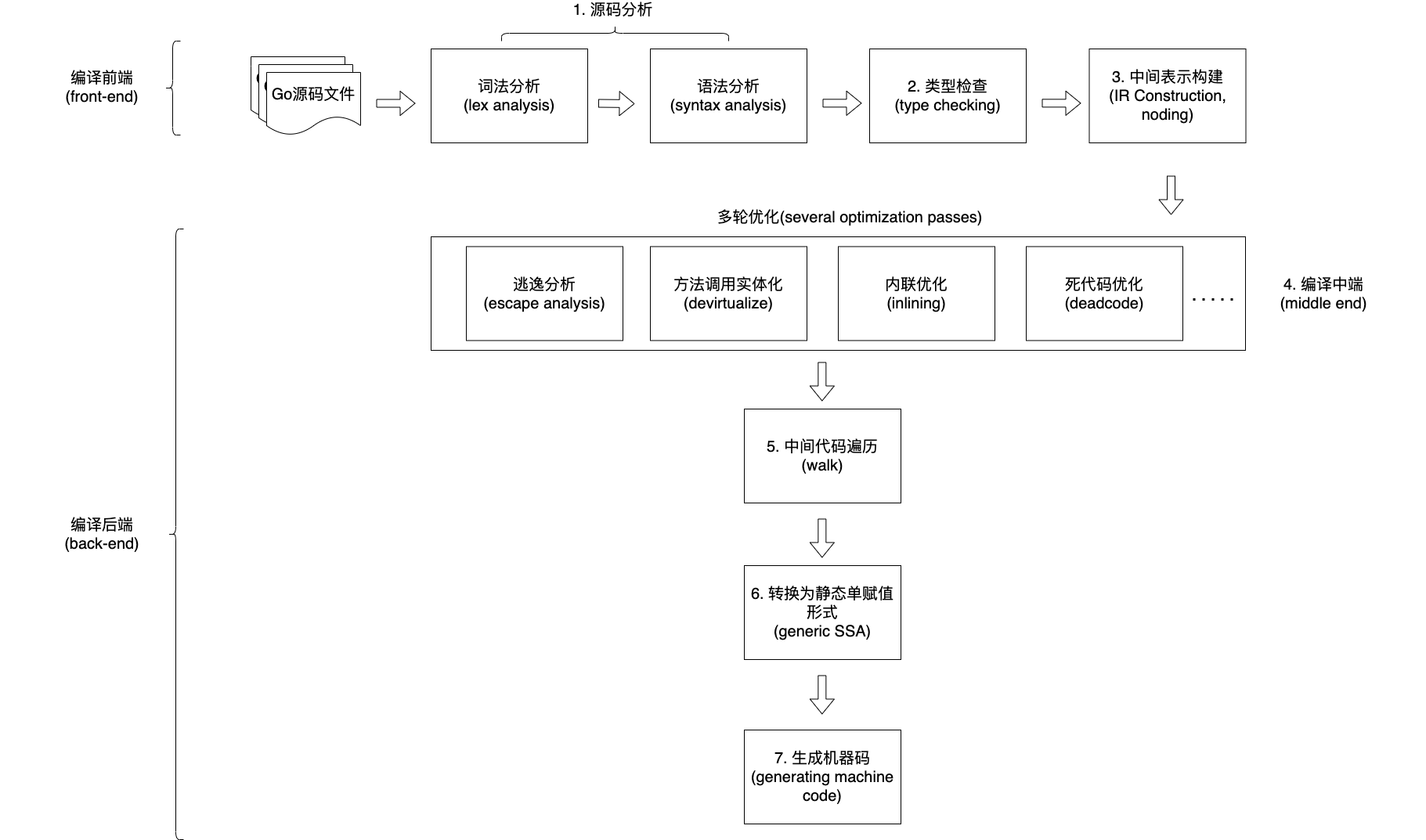 Once we understand where the Go inline is located, we can roughly determine the overhead that comes with Go inline optimization.

Let’s look at the overhead of Go inline optimization with an example. reviewdog is a pure Go implementation of a code review tool that supports major code hosting platforms such as github and gitlab. It has a size of about 12k lines (using loccount statistics).

We build the reviewdog with inline optimization on and off, and collect the build time and the size of the built binaries, with the following results.

Note: Whether or not inline optimization is enabled for hello world level programs most of the time you won’t see much difference, either in compile time or binary size.

Since we know where the inline optimization is located, this overhead can be well explained: according to the definition of inline optimization, once a function is decided to be inlineable, all the code in the program at the location where the function is called is replaced with the implementation of the function, thus eliminating the runtime overhead of the function call, which also leads to a certain amount of “code bloat” at the IR (intermediate code) level. code “bloat” at the IR (intermediate code) level. As mentioned earlier, the “side effect” of code bloat is that the compiler can take a broader and more distant view of the code, and thus may implement more optimizations. The more rounds of optimizations that can be implemented, the slower the compiler executes, which further increases the compiler’s time consumption; at the same time, the bloated code requires the compiler to process and generate more code in later stages, which not only increases the time consumption, but also increases the size of the final binary file.

Go has always been sensitive to compilation speed and binary size, so Go uses a relatively conservative inlining optimization strategy. So how exactly does the Go compiler decide whether a function can be inlined or not? Let’s take a brief look at how the Go compiler decides which functions can be optimized inline.

As mentioned before, inline optimization is one round of a multi-round (pass) optimization at the middle end of the compilation, so its logic is relatively independent, it is done based on IR code and it is IR code that is changed. We can find the main code of the Go compiler for inline optimization in $GOROOT/src/cmd/compile/internal/inline/inl.go in the Go source code.

Note: The location and logic of the code in the inline optimization section of the Go compiler may have changed in previous versions and in future versions; currently this article refers to code that is the source code in Go 1.19.1.

The “driving logic” for the inline optimization process is in the Main function in $GOROOT/src/cmd/compile/internal/gc/main.go.

The code for InlinePackage is as follows.

VisitFuncsBottomUp is traversed from the bottom up according to the function call graph, which ensures that each time analyze is called, each function in the list only calls other functions in the list, or functions that have already been analyzed (in this case replaced by inline function bodies) in a previous call.

What is a recursive function that spans more than one function before recursion, look at this example below to understand.

f is a recursive function, but instead of calling itself, it eventually calls itself back through the function chain g -> h, which is > 1 in length, so f is inlineable.

The CanInline function has more than 100 lines of code and its main logic is divided into three parts.

The final call to visitor.tooHairy determines the complexity of the function. The method is to set an initial maximum budget for this iteration (visitor), which is a constant (inlineMaxBudget) and currently has a value of 80.

Then iterate through the individual syntax elements in that function implementation in the visitor.tooHairy function.

Note: Why is the value of inlineExtraCallCost 57? This is an empirical value, obtained from a benchmark.

Once it is determined that it can be inlined, then the Go compiler saves some information to the Inl field of that function node in the IR.

The Go compiler sets the budget value to 80, apparently not wanting overly complex functions to be optimized inline, so why? The main reason is to weigh the benefit of inline optimization against the overhead. By making more complex functions inline, the overhead will increase, but the benefit may not increase significantly, i.e. the so-called “input-output ratio” is insufficient.

From the above description of the principle, it is clear that it may be better to inline functions that are small in size (low complexity) and are called repeatedly. For those functions that are too complex, the overhead of function calls is already very small or negligible, so inlining is less effective.

Many people will say: Isn’t there more opportunity for compiler optimization after inlining? The problem is that it is impossible to predict whether or not there are optimization opportunities and what additional optimizations will be implemented.

But Go also gives us some means to control inlining, for example we can explicitly tell the compiler on a function not to inline that function, let’s take add.go in the example above.

With the //go:noinline indicator, we can disable the inlining of add.

Note: Disabling a function from being inlined does not affect the InlineCalls function’s function body replacement for inline functions called inside that function.

Let’s verify this with the previously mentioned reviewdog.

After that we look at the generated binary file size.

We find that the noinline version is actually slightly larger than the inline version! Why is this? It has to do with the way the -gcflags argument is passed. If you just pass in -gcflags '-l' like on the command line above, closing the inline only applies to the current package, i.e. cmd/reviewdog, and none of the package’s dependencies etc. are affected. -gcflags supports pattern matching.

We can set different patterns to match more packages, for example, the pattern all can include all the dependencies of the current package, let’s try again.

This time we see that reviewdog-noinline-all is quite a bit smaller than reviewdog-inline, which is because all turns off inlining for each of the packages reviewdog depends on as well.

Inline optimization is an important optimization tool that will bring significant performance improvements to your system when used properly.

The source code covered in this article can be downloaded here.