This time let’s talk about a recent problem: how to speed up the connection building speed of massive connections based on TLS secure communication?

Below the TLS (Transport Layer Security) layer is the TCP layer, and the first thing we might think of is optimizing the kernel parameters related to the TCP handshake to quickly establish a TCP connection, for example.

In addition, in order to speed up connection building for massive connections, in addition to increasing the speed at which applications can get connections from the kernel’s accept connection queue, we can also use a multi-thread/multi-goroutine mechanism to concurrently listen to the same port and concurrently accept it, if you are using the Golang, take a look at the go-reuseport package.

After talking about the TCP layer, are there any optimizations that can be made to the TLS layer that will have an impact on connection building speed? Yes, there is, and that is the use of TLS version 1.3 to speed up the handshake process and thus the connection building speed.TLS 1.3 is a new TLS standard released in 2018 and has only started to be supported by mainstream languages, browsers and web servers in the last 2-3 years. So how does it differ from the previous TLS 1.2, and how well does Go support TLS 1.3? How do you write secure communication code using TLS 1.3 in Go, and how much faster is TLS 1.3 connection establishment than TLS 1.2?

With these questions in mind, let’s move on to the main part of this post! Let’s take a brief look at the differences between TLS 1.3 and TLS version 1.2.

TLS is a secure connection protocol standard based on encryption, decryption and signature algorithms developed and published by the Internet Engineering Task Force (IETF) (https://www.ietf.org/) as an alternative to SSL, which evolved as follows.

Among them, TLS 1.0 and 1.1 versions will be deprecated in 2020 because they are no longer safe, and the mainstream version, which is also the most widely used, is the TLS 1.2 version released in 2008 (the usage share is as shown in the statistics below), while the latest version is the TLS 1.3 officially released in 2018, and the release of TLS 1.3 version also means that TLS 1.2 The release of TLS 1.3 also means that TLS 1.2 has entered the “obsolescence” period, although in practice it will take a long time for TLS 1.2 to “go offline”.

TLS 1.3 is not incompatible with TLS 1.2. In the TLS 1.3 protocol specification, we can see some of the major changes listed for TLS 1.3 compared to TLS 1.2.

Of these major changes, the obvious one related to initial connection speed is the change in the TLS 1.3 handshake mechanism: from 2-RTT to 1-RTT (as shown in the figure above). Let’s use Go as an example to see how TLS 1.3 actually improves on TLS 1.2 in terms of connection speed.

With that understood, let’s look at a simple client-side and server-side example using Go and TLS version 1.3.

This time, instead of referring to the Go standard library crypto/tls package, let’s play with the trendy one: generating a set of TLS-based client-server communication code examples with AI assistance. I’m using the AI programming assistant (AICodeHelper), and here is a screenshot of the generation process.

ChatGPT is not available to mainland China. 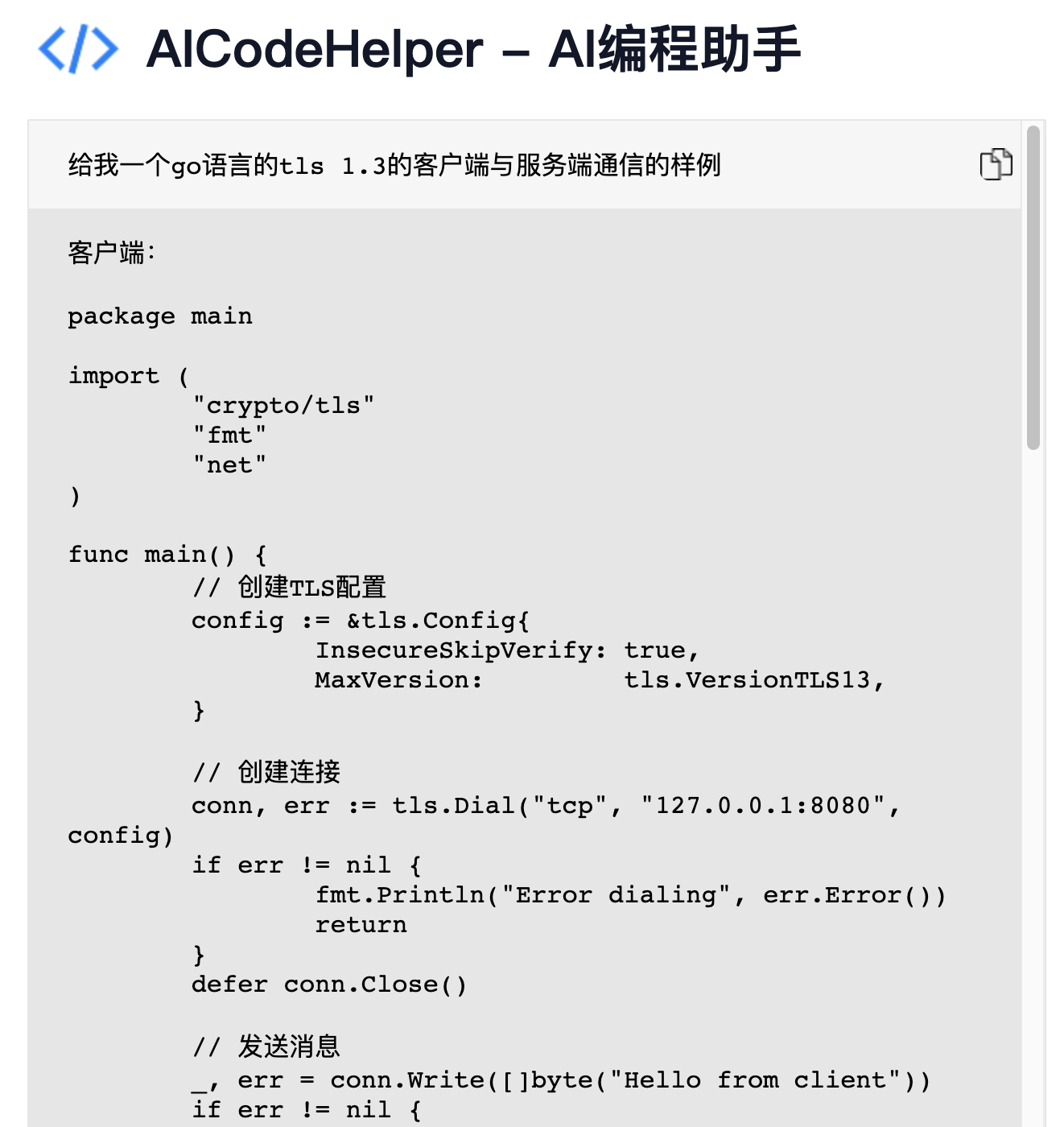 AICodeHelper generates most of the code for us, but the server-side code has two problems: it can only handle a client-side connection and does not generate the snippet to pass in the server certificate and private key, we do a little modification based on the above framework code to get our server and client-side code.

For convenience, we use self-signed certificates here, and the client does not check the public key digital certificate of the server (we do not need to generate the key and certificate related to the creation of CA), we just need to use the following command to generate a pair of server.key and server.crt.

Some of you may say: use wireshark network tool, this works, but it is more laborious to use wireshark, especially for TLS 1.3. We have a simpler way, we can do it in our development environment by modifying the standard library. Let’s move on to the next page.

4. Selection of TLS version on server and client side

The TLS handshake process is initiated from the client side, and from the client’s point of view, when the client receives the response from serverHello it can get the TLS version to be used after the decision. So here we modify the clientHandshake method of crypto/tls/handshake_client.go and use fmt.Printf in its implementation to output information about the TLS connection (see the output in the following code starting with “====”).

After modifying the standard library, let’s re-run the above client.go.

And those hexadecimal numbers contained in the output cipherSuites are from the following constants.

The second line of output from client.go shows that for this build, both sides finally chose TLS version 1.3 and the cipher suite TLS_AES_128_GCM_SHA256. This is consistent with what we described earlier in our review of the history of TLS 1.3 support in Go, where TLS 1.3 was the default choice.

We create server_tls12.go based on server.go, and in this new source file we add a configuration MaxVersion to tls.Config and set its value to tls.VersionTLS12, which means the maximum supported TLS version is TLS 1.2. This way when we use client.go to connect to a server-side application running on server_tls12.go, we will get the following output.

We see that both sides of the interaction end up choosing TLS version 1.2, using a cipher suite of 0xc02f, i.e. TLS_ECDHE_RSA_WITH_AES_128_GCM_SHA256.

Similarly, if you want to configure the highest support for TLS version 1.2 on the client side, you can also use the same way, you can look at the source file client_tls12.go in the corresponding code base of this article, so I will not repeat it here.

Here, some of you may have a question: we can configure the version of TLS to be used, but for TLS 1.3, can we configure the ciphersuites to be used? The answer is currently no, for the following reason: Config.CipherSuites field comment: Note that TLS 1.3 ciphersuites are not configurable.

tls package will select cipher suites based on whether the system supports AES acceleration, if it supports AES acceleration, the following defaultCipherSuitesTLS13 will be used so that AES-related suites will be selected first, otherwise defaultCipherSuitesTLS13NoAES will be used and TLS_ CHACHA20_POLY1305_SHA256 will be selected first.

Finally, let’s see how much faster TLS 1.3 is in establishing a connection compared to TLS 1.2. Considering the difference in the number of RTTs between the two versions, i.e. the network latency has a large impact on the connection establishment speed, I deliberately chose a network with a ping of 20-30ms. We set up a Benchmark Test for TLS 1.2 and TLS 1.3 respectively.

We see that connection establishment is indeed faster for TLS 1.3 compared to TLS 1.2. However, the implementation of Go TLS 1.3 seems to be a bit more complex in terms of memory allocation.