This chapter briefly describes the principles related to kubernetes authentication, and ends with an experiment to illustrate the idea of implementing the kubernetes user system.

As described in the Kubernetes apiserver for authentication section, all users accessing the Kubernetes API (via any client, client library, kubectl, etc.) go through three stages of Authentication, Authorization, and Admission control to complete the authorization of the “user”, as shown in the following diagram. 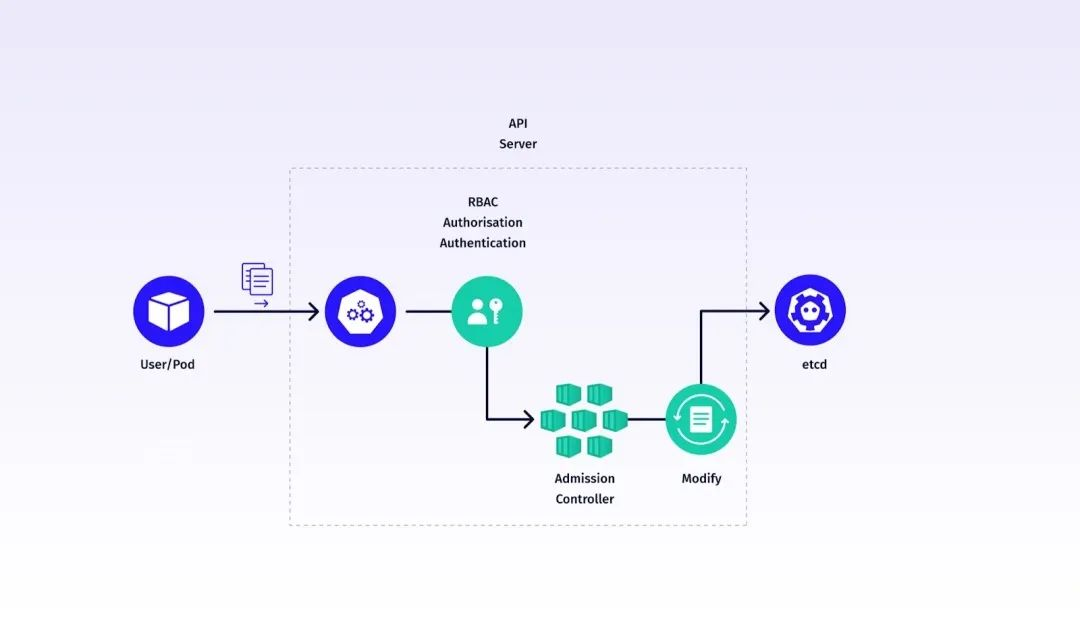 In most tutorials, the work done on these three phases is roughly as follows.

Having learned here that the Kubernetes API actually does the work of a “human user” with a kubernetes service account; this leads to the important concept of what a “user” is in Kubernetes, and what a user is in authentication, which is also the center of this chapter.

The concept of “user” is given in the official Kubernetes manual, and the users present in a Kubernetes cluster include “normal user” and “service account”, but Kubernetes does not manage normal users in the same way as normal users, except that users who use a valid certificate signed by the cluster’s certificate CA are considered legitimate users.

For external users, Kubernetes actually gives a variety of user concepts, such as

Example of granting access to a cluster to an external user

In this scenario kubernetes will use cn as the user and ou as the group in the certificate, and the request is legitimate if the corresponding rolebinding/clusterrolebinding gives permissions to the user.

Next, we analyze the related source code.

Authenticating users is what apiserver does in the Authentication phase, and the corresponding code is under pkg/kubeapiserver/authenticator, the whole file is a series of authenticators, and the x.509 certificate is one of them.

Next, see the implementation principle, the NewDynamic function is located in the code http://k8s.io/apiserver/pkg/authentication/request/x509/x509.go

As you can see by the code, it is an authentication function with the user to resolve to an Authenticator

The verification function is a method of CAContentProvider, and the x509 part is implemented as http://k8s.io/apiserver/pkg/server/dynamiccertificates/dynamic_cafile_content.go.VerifyOptions.

You can see that the return is an x509.VerifyOptions and an authenticated status

Since authorization is out of the scope of this chapter, it is directly ignored until the inbound phase. The inbound phase is implemented by RESTStorageProvider, where each Provider provides an Authenticator which contains the allowed requests that will be written to the repository by the corresponding REST client.

In this scenario, when kube-apiserver has --enable-bootstrap-token-auth enabled, you can use Bootstrap Token for authentication, usually with the following command, adding Authorization: Bearer <token> to the request header.

As you can see, in the code pkg/kubeapiserver/authenticator.New() when kube-apiserver specifies the parameter --token-auth-file=/etc/kubernetes/token.csv this authentication will be activated.

At this point, open token.csv to see what the token looks like.

Back to the code here http://k8s.io/apiserver/pkg/authentication/token/tokenfile/tokenfile.go.NewCSV, where you can see that it is reading the --token-auth-file= parameter specified by the tokenfile, and then parses it to the user, record[1] as the username, and record[2] as the UID.

The format configured in the token file is a comma-separated set of strings.

The most common way such a user is kubelet will usually authenticate to the control plane as such a user, such as the following configuration.

The contents of /etc/kubernetes/auth/bootstrap.conf, where the kube-apiserver configuration of --token-auth-file= username and the group must be system:bootstrappers, are used.

The problems that usually occur in binary deployments, such as the following errors.

And the usual solution is to execute the following command, here is the user authorization when communicating kubelet with kube-apiserver, because the official condition given by kubernetes is that the user group must be system:bootstrappers.

The generated clusterrolebinding is as follows

Such a user does not exist within kubernetes and can be considered an external user, but is present in the authentication mechanism and bound to the highest privilege, which can also be used for authentication for other accesses.

serviceaccount is usually created automatically for the API, but in the user, there are actually two directions for authentication, one is --service-account-key-file This parameter can specify more than one, specifying the corresponding certificate file public or private key for issuing the token of the sa.

First, a token is generated based on the specified public or private key file.

For --service-account-key-file he generates the user as “kubernetes/serviceaccount” , while for --service-account-issuer just provides a title for the sa issuer to identify who it is instead of the uniform “kubernetes/serviceaccount” , here you can see from the code that the two are exactly the same, just with different titles.

Finally, a token is issued based on the values of ServiceAccounts, Secrets, etc., which is the value obtained by the following command.

OpenID Connect is OAuth2 style and allows users to authorize a three-party site to access their information stored on another service provider without giving the username and password to the third-party site or sharing all the contents of their data, here is a logical diagram of kubernetes using OID authentication.

The following diagram shows how WebhookToken authentication works in kubernetes. 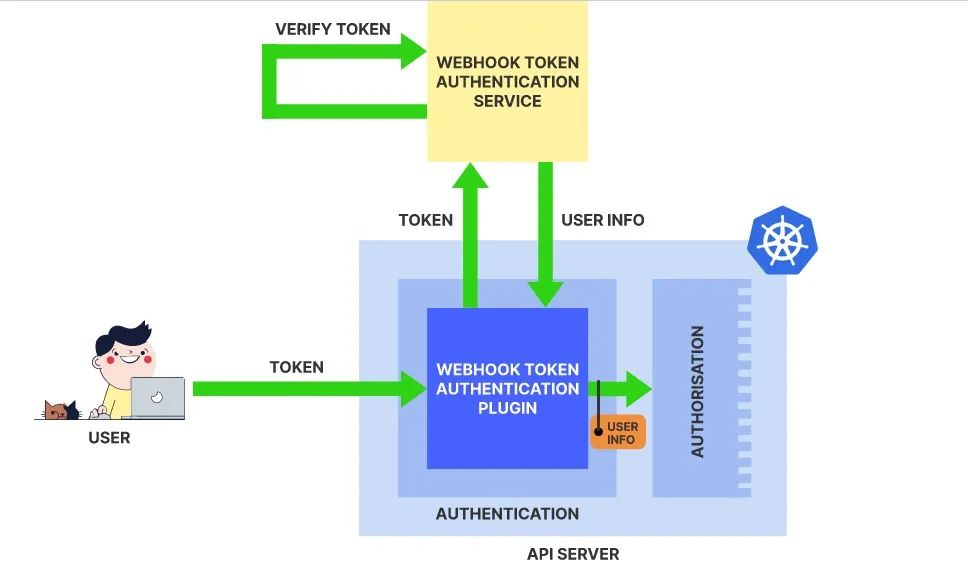 Finally, the authHandler in the token loops through all the Handlers and then runs the AuthenticateToken to get the user’s information.

The webhook plugin also implements this method AuthenticateToken , where the injected webhook is called via a POST request that carries a JSON formatted TokenReview object containing the token to be authenticated.

The webhook token authentication service returns the user’s identity, which is the data structure mentioned in the token section above (webhook to decide whether to accept or reject the user).

The above exposition gives a general idea of how users are classified in the kubernetes authentication framework and what the authentication policies consist of. The purpose of the experiment is also to illustrate the result that using OIDC/webhook is a better way to protect and manage kubernetes clusters than other ways. First, in terms of security, assuming that the network environment is insecure, then any node node that misses the bootstrap token file means that it has the highest privileges in the cluster; second, in terms of management, the larger the team, the more people, it is impossible to provide a separate certificate or token for each user, knowing that the traditional tutorials talk about token in kubernetes The token is permanently valid in the kubernetes cluster unless you delete the secret/sa, and the plugins provided by Kubernetes solve these problems very well.

The experiment is roughly divided into the following steps.

Next, you need to determine how to authenticate successful users, as mentioned above for kubernetes in the user format of v1.UserInfo, that is, to get the user, that is, the user group, assuming that the need to find the user for admin, then the query filter in openldap as follows.

The above statement means to find the information of entries with objectClass=posixAccount and uid=admin or objectClass=posixGroup and memberUid=admin, where “|” and “&” are used to get these two results.

Here because the openldap configuration password format is not explicit, if you use “=” directly to verify the content is not queried, so directly use an additional login to verify whether the user is legitimate.

There are a few things to note here, namely the definition of the user or token to be authenticated, here the username@password format is used as the user identification, i.e. when logging into kubernetes you need to directly enter username@password as the login credentials.

The second part is the return value, which must be returned to Kubernetes in the api/authentication/v1.TokenReview format, with Status.Authenticated indicating the user authentication result, and if the user is legitimate, then set tokenReview. Authenticated = true and vice versa. If authentication is successful you also need Status.User which is in ldapSearch.

Here is the complete code.

The official kubernetes manual states that the flag to enable webhook authentication is to specify the parameter --authentication-token-webhook-config-file in kube-apiserver . And this configuration file is a kubeconfig type file format.

The following is the configuration for deploying outside of a kubernetes cluster.

Create a configuration file /etc/kubernetes/auth/authentication-webhook.conf for use by kube-apiserver.

After starting the service, create a user in kubeconfig to verify the results.

When the password is incorrect, use the user admin to request the cluster.

When the password is correct, use the user admin to request the cluster.

At this point, try again to access the cluster using the admin user.

The kubernetes authentication plugin provides the ability to inject an authentication system that perfectly solves the problem of users in kubernetes who do not exist in kubernetes and can be authenticated without having to prepare a large number of serviceaccounts or certificates for multiple users. The The first return value criterion is as follows: if the kubernetes cluster has Groups that are available on other user systems and clusterrolebinding or rolebinding is established, then all users in the group will have those privileges. The administrator only needs to maintain as many clusterrole and clusterrolebinding as there are groups in the company user system