Write a Java HTTP application that starts listening on port 8000 and returns hello world after executing curl localhost:8000/hello, which can be packaged into an executable jar and then imaged using the following Dockerfile.

Place app.jar and Dockerfile in a separate folder and execute the docker image build command.

I’ve pushed oci-demo-app:v0 to Dockerhub, you can pull the image via docker pull zengxu/oci-demo-app:v0 and reproduce the results posted in this article on your own computer.

Run the container with docker run and you can then access the service via HTTP requests.

The Docker commands used above demonstrate the following functionality.

The advent of OCI

Docker is too much for Kubernetes, especially as Kubernetes matures and becomes the de facto standard for container orchestration

So in 2015, with the support of the Linux Foundation, there was the Open Container Initiative (OCI) (which is functionally the organisation responsible for developing the Open Community Container Standard).

The Open Container Initiative (OCI) is a lightweight, open governance structure (project), formed under the auspices of the Linux Foundation, for the express purpose of creating open industry standards around container formats and runtime. The OCI was launched on June 22nd 2015 by Docker, CoreOS and other leaders in the container industry.

Docker has donated its container format and runtime runC to OCI, which has developed 2 standards based on it: the runtime standard Runtime Specification (runtime-spec) and the image standard Image Specification (image-spec).

The runtime-spec is simply a specification of how to get the container running once you have the folder and configuration file (we’ll show how simple it is below!).

The Runtime Specification outlines how to run a “filesystem bundle” that is unpacked on disk.

image-spec is so verbose that OCI doesn’t post what it does in the introduction to the front page. It actually specifies the format in which images should be organised into file layers and how image configuration files should be written. You can ignore it for now, as the following section will show you what an OCI image really is.

What is an image

What’s in a Docker image

Export the image with the docker image save command, unpack it with the tar command, and use the tree command to get the image file structure. Yes, the image is a tar archive and contains multiple layer.tar archives.

manifest.json declares the image’s configuration, tag and the layers it contains, while each layer folder contains a json file declaring the current layer’s configuration and its own parent layer, in fact each layer is an image that is then combined to form a new image. This layering of images allows the storage implementation to handle Push and Pull by simply transferring the non-existent layers. The oci-demo-app:v0 hierarchy is as follows.

If you look at the json config file, you will find the EntryPoint previously declared in the Dockerfile, which also contains the Linux std, tty and the familiar Java environment variables.

If we follow the relationship of the layers in the archive, starting at the top level and unpacking the files one by one and then merging them into a directory tree, we get the container runtime filesystem.

In fact, if you export the container filesystem via the docker export command, you will also get that file structure.

Converting a Docker image to an OCI image

Use skopeo to copy the remote image copy locally in OCI format.

The resulting OCI format image consists of the following parts

The image manifest file can be found immediately based on index.json, and the OCI format is more descriptive than the direct docker export.

In fact, OCI Image Spec V1 is based on Docker Image Manifest V2 and is almost identical to both. The correspondence of MediaType can be found here (https://github.com/opencontainers/image-spec/blob/master/manifest.md).

Here the tool oci-image-tool is used directly to convert the downloaded archive into a file system, with the same result.

After the hands-on tossing above, come back to understanding the passage.

At a high level the image manifest contains metadata about the contents and dependencies of the image including the content-addressable identity of one or more filesystem serialization archives that will be unpacked to make up the final runnable filesystem. The image configuration includes information such as application arguments, environments, etc.

The combination of the image manifest, image configuration, and one or more filesystem serializations is called the OCI Image.

image = a manifest + one or more layers + a config file

By taking advantage of the uniqueness of the hash value of the file archive, the mirror storage facility only needs to check local storage against the file list when interacting, and only one copy of the same archive needs to be stored, dramatically improving the efficiency of mirror distribution. On a well warmed up machine, transferring the image is equivalent to transferring only the package.

The user only needs to provide the package, the program configuration and declare program dependencies to organise the image via the build tool.

Combining and unpacking these packages according to the OCI specification results in a runnable filesystem containing packages and dependencies. As soon as this filesystem (called rootfs in the OCI specification) and the json configuration files are given to the OCI container runtime, the container runtime is able to run the target application as expected by the user.

runC is the standard implementation of runtime-spec provided by OCI and can be used to run containers directly.

Use the runC spec to generate the OCI container run configuration file config.json and modify it slightly to match the image configuration.

If you enter the container shell console via runC exec and run ifconfig, you will find that by default the runC container has only one loop NIC, with a single address of 127.0.0.1.

That is, containers run in this way are isolated in the network namespace of a separate cgroup and cannot be accessed directly from the host.

Bind a virtual NIC to the runC container

Stop and remove the container first.

Note: brctl may need to be installed by yourself, CentOS can be accessed with the following command.

Also using ip netns for the namespace, we give the container NIC (at /var/run/netns/runc-demo-contaienr) an IP address of 10.200.0.2 to access the container.

Modify the network section of config.json .linux.namespaces (note: the final full version of the configuration is placed here).

If you go into the container, you can find an additional eth0 NIC.

Again, you will see the runc0 bridge and the veth-host NIC on the host machine, which is not shown here.

The Docker networking principle is similar, you will find a bridge named docker0 and several virtual NICs named veth-xxxx on your own machine.

It’s worth noting that if multiple containers can share the same namespace NIC, the network is also connected between containers in the same space, which is how k8s Pod networking works.

The significance of the OCI standard

Before OCI, the container ecosystem was blossoming, with Docker riding high, but with separate communities, developers were tired of compatibility and users were miserable.

With the OCI mirroring standard, different platforms can optimize the storage and transfer of mirrors along their own directions, while also being able to use the same set of standards for interoperability, allowing users to migrate freely across platforms. 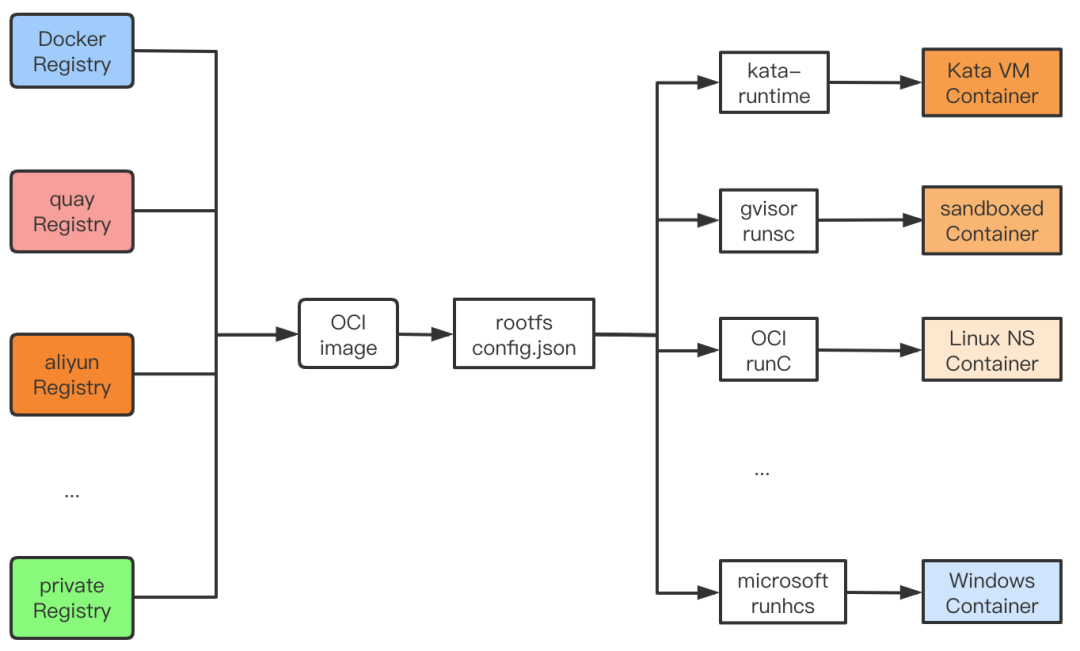 OCI does not set standards for either networking or storage, as these are platform implementation dependent. However, as the runC summary shows, the user can mount the network and storage as long as they use platform related technologies (Linux namespace network for example).

The OCI Runtime implementation supports the use of 2 phases for starting containers, create and start, where the user can prepare resources such as network and storage between create and start.

In fact, it was OCI’s ability to set standards at a low enough generic level that made it a huge success.

Today, it is available across cloud platforms, across operating systems, across hardware platforms and supports a wide range of isolation …