I wrote an article about the red lock implementation in Redis a long, long time ago, but in a production environment, the distributed lock component used in my projects has always been Redisson, a Java-based Redis client framework written with features of In-Memory Data Grid Redisson is a Java-based Redis client framework (Redis Java Client) with features of In-Memory Data Grid, which extends the basic data types of Redis with a variety of advanced data structures, as shown in the official introduction. 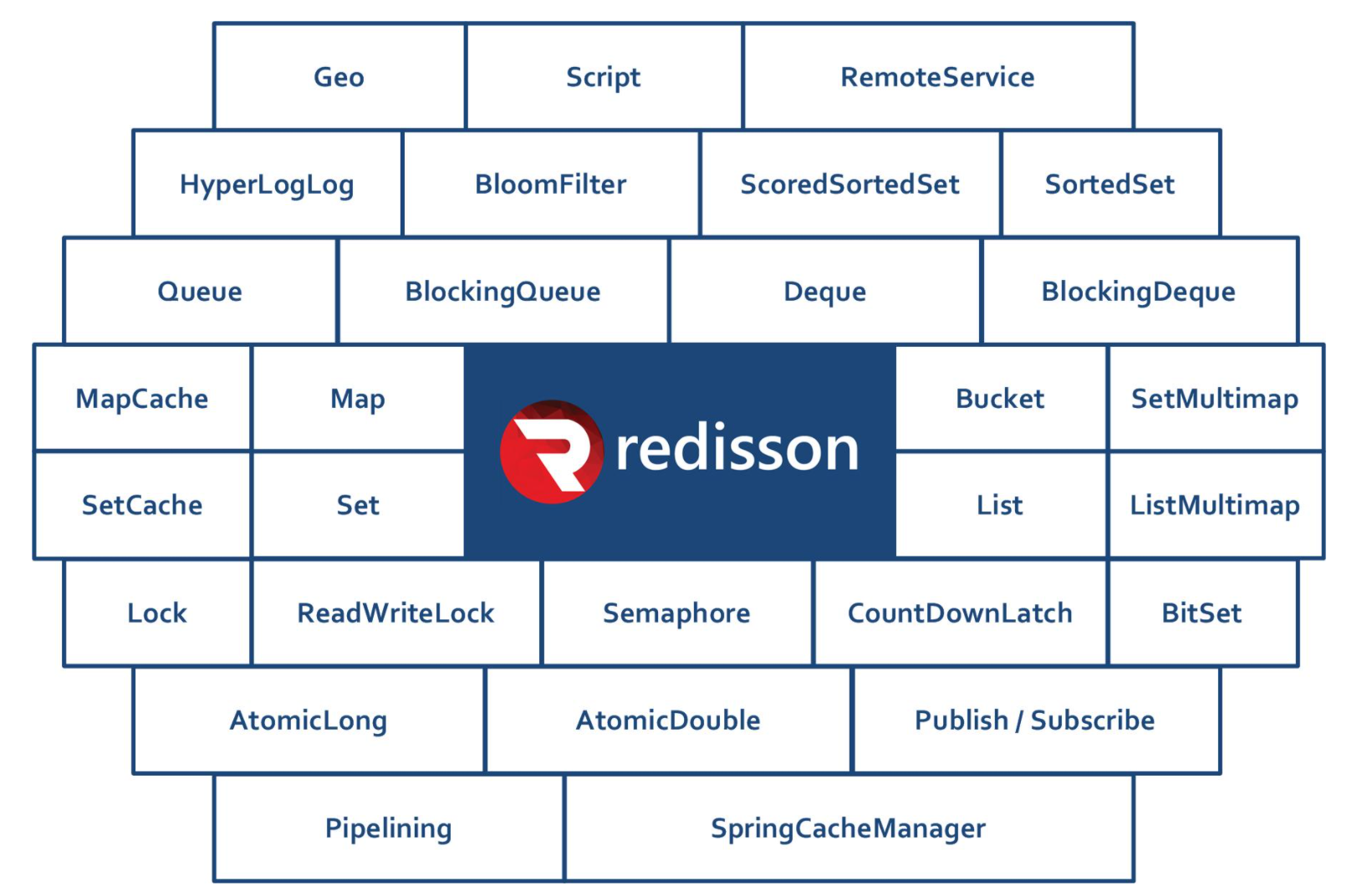 The R(ed) Lock implementation to be analyzed in this article is only one of the very small modules, other advanced features can be selected on demand. The following section will cover the basic principles, source code analysis, and Jedis-like implementation. The Redisson source code analyzed in this article is the main branch source code of the Redisson project around 2020-01, corresponding to version 3.14.1.

The basics of red lock are actually “out in the open” on the Redis website’s front page documentation (the link is https://redis.io/topics/distlock). 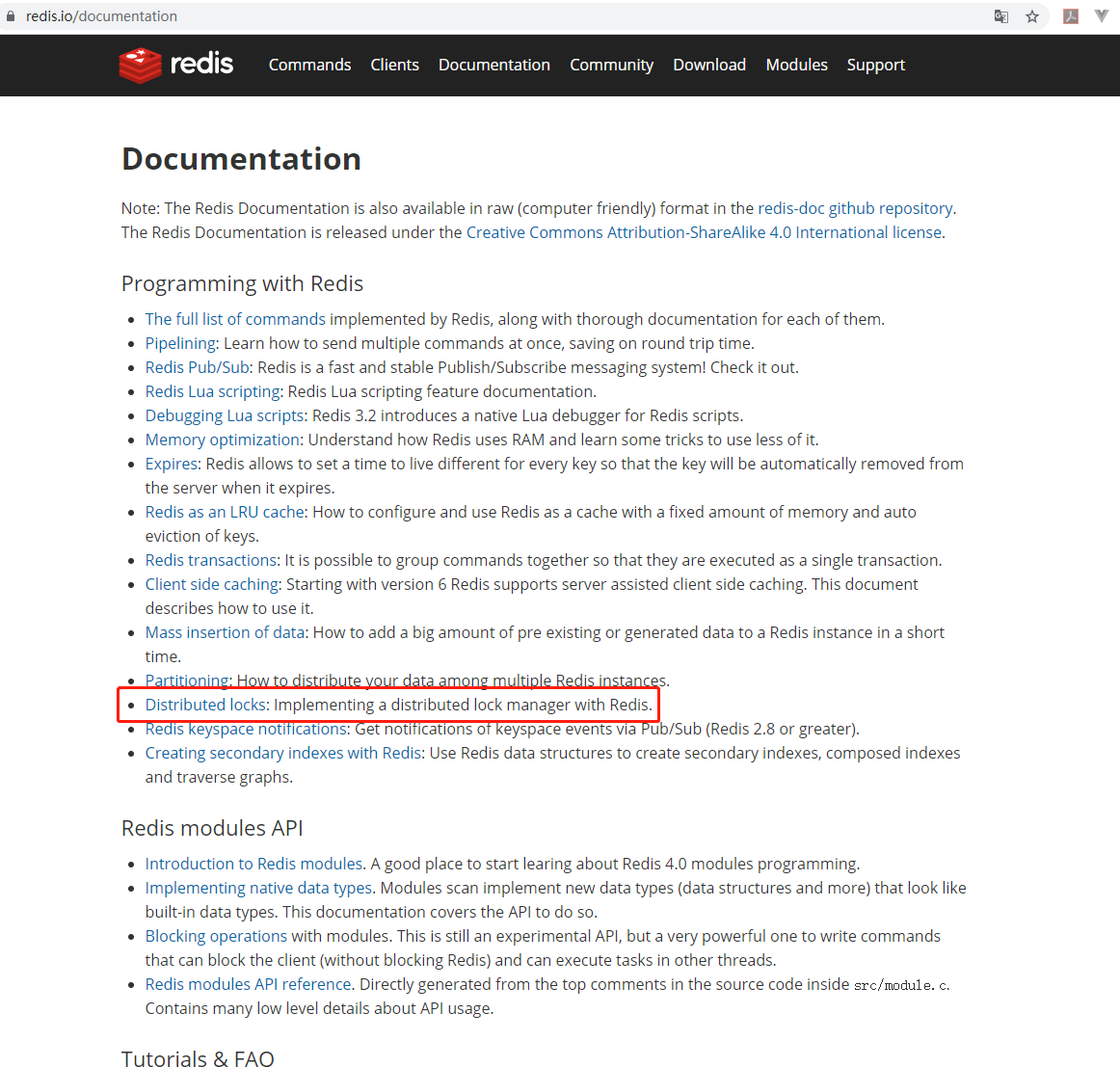 Roughly speaking: distributed locks are a very useful primitive in many environments where different processes must operate in a mutually exclusive manner using shared resources. This attempts to provide a more speciﬁc algorithm to implement distributed locks for Redis. We propose an algorithm called Redlock, which implements DLM (guessing that it stands for Distributed Lock Manager), which we believe is more secure than the normal single-instance approach.

The documentation also points out that the current implementation of the algorithm for failover still has obvious problems with competing conditions (described, I believe, under the Redis master-slave architecture):.

The implementation of the algorithm is simple, and the locking command under a single Redis instance is as follows.

Nx and PX here are enhanced parameters for the SET command, which since Redis version 2.6.12 has provided the optional compound operator.

The unlock command under a single Redis instance is as follows.

To use RLock, you need to first instantiate Redisson, which has been adapted to Redis’ Sentinel, Cluster, Normal Master-Slave, and Standalone modes, because I have only installed standalone Redis locally, so here is a demonstration using the standalone mode configuration. Instantiating RedissonClient.

More often than not, we choose APIs with a wait time period and a maximum lock holding time.

To make it easier to use, you can refer to the programmatic transactions in spring-tx for a light wrapper like this.

Using RedissonLockProvider (for information only).

Renewal or extension of the KEY expiration time in Redisson using watch dog implementation, understanding for the renewal of the guard thread, the underlying reliance on Netty’s time wheel HashedWheelTimer and task io.netty.util.Timeout implementation, commonly known as watchdog, the following will be analyzed in detail.

First look at the class diagram of RLock.

The class inheritance diagram of RedissonLock is as follows. 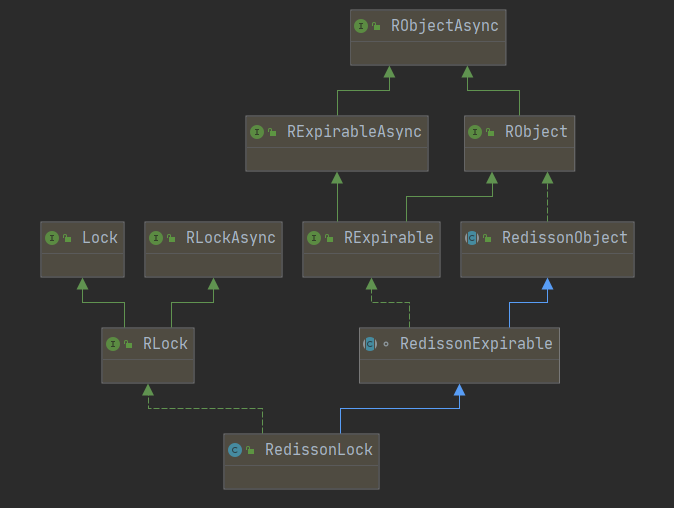 Moving on to the constructor and core properties of RedissonLock first.

Here you need to pay attention to the lockWatchdogTimeout parameter in the Config. 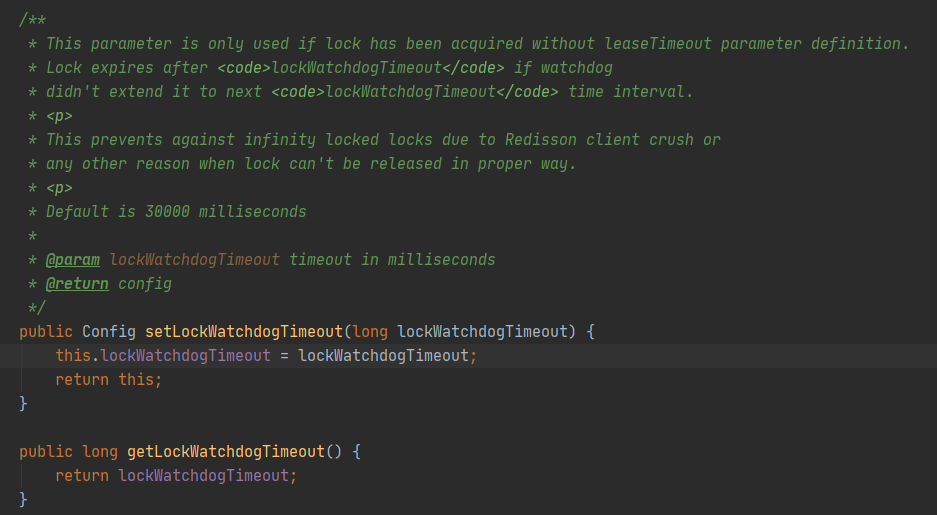 Here is a list of methods to get names in RedissonLock for later use when analyzing these names as KEY for K-V structures.

Moving on to the locking method, the core implementation is mainly.

Let’s first look at the lock() method system, which contains only the maximum holding time of the lock.

First, note the property internalLockLeaseTime, which is reassigned within the tryLockInnerAsync() method, and it is assigned to lockWatchdogTimeout if releaseTime == -1L. This detail is important and determines the scheduling of the renewal method (watchdog) later This detail is important and determines the frequency of scheduling of later renewal methods (watchdogs). Also, the releaseTime ! = -1L will not be renewed, i.e., the watchdog mechanism will not be activated.

Next, we need to carefully analyze the LUA script executed in tryLockInnerAsync(), which I have extracted and described through comments.

Here is a diagram demonstrating the logic of the three pieces of code that appear in this Lua script. 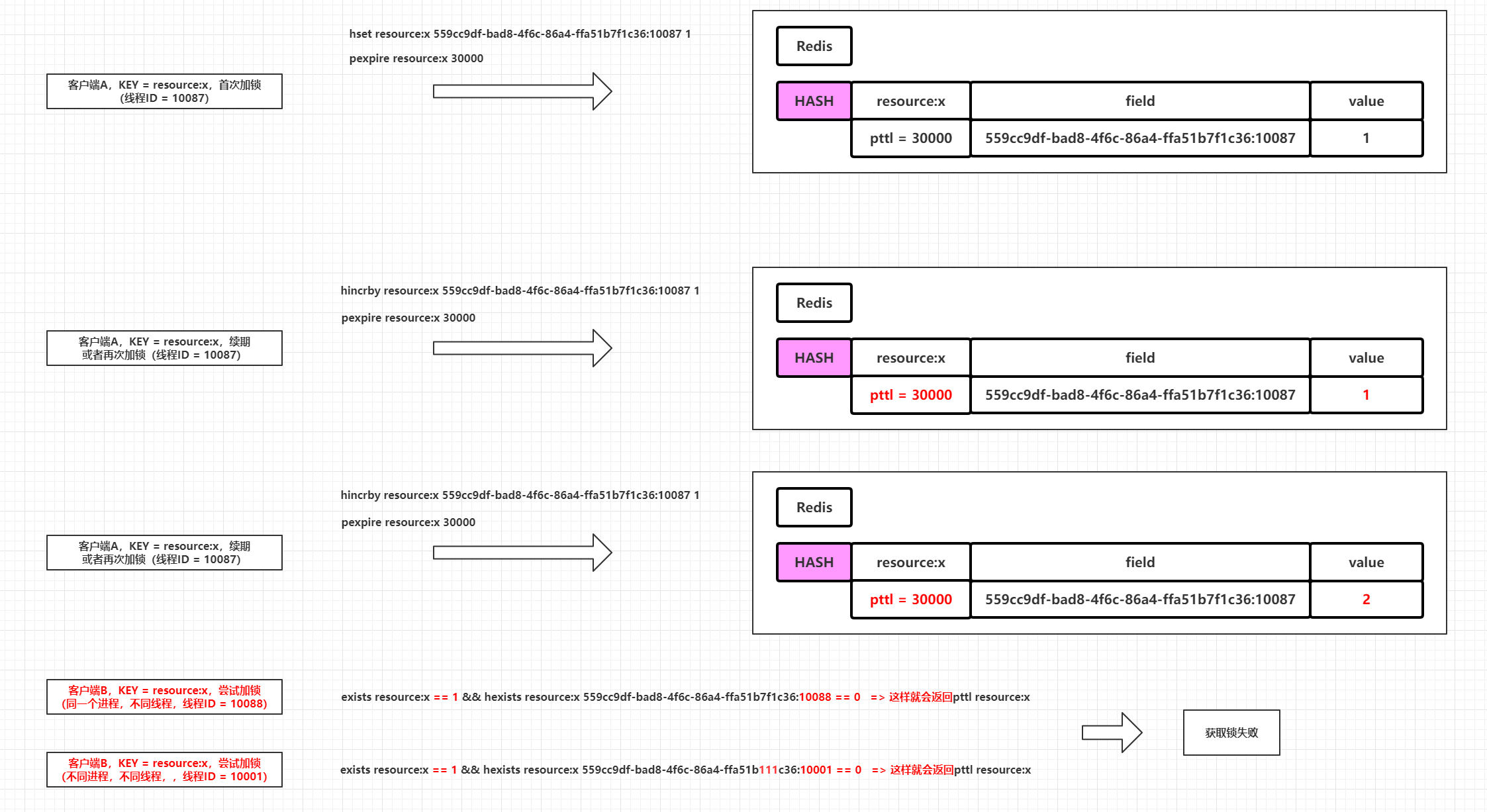 The remaining scheduleExpirationRenewal(threadId) method has not been analyzed, and the logic inside is the periodic renewal logic of the watchdog:

Based on the source code, it is inferred that the mechanism of renewal is determined by the entry reference to releaseTime.

The Lua script for extracting the renewal is as follows.

So far, the locking and renewal logic without the waitTime parameter is basically analyzed, and the tryLock(long waitTime, long leaseTime, TimeUnit unit) implementation with the waitTime parameter is actually the same as the lock(long leaseTime, TimeUnit unit, boolean interruptibly) implementation with only the leaseTime parameter. leaseTime, TimeUnit unit, boolean interruptibly) implementation of the underlying call method is the same, the biggest difference is that after trying to obtain the lock operation based on the before and after the System.currentTimeMillis() calculate the time difference and waitTime to do a comparison, to decide the need to Blocking wait or direct timeout to get the lock failed to return, the logic to deal with blocking wait is the logic of the client itself, here do not do a detailed expansion, because the source code implementation is not very elegant (too much long currentTime = System.currentTimeMillis() code segment). Then spend some effort to analyze the implementation of unlocking, including the general case of unlock unlock() and forceUnlockAsync().

The Lua scripts for unlocking and forcing unlocking in general are listed here and analyzed as follows.

Other auxiliary methods are relatively simple, so here is a simple “running account” to record some.

The subscription and publishing sections are designed to use a large number of Netty components related to the source code, which is not expanded in detail here, and the logic of this section is simply appended to this flowchart later. Finally, a more detailed diagram analyzes the Redisson locking and unlocking process. 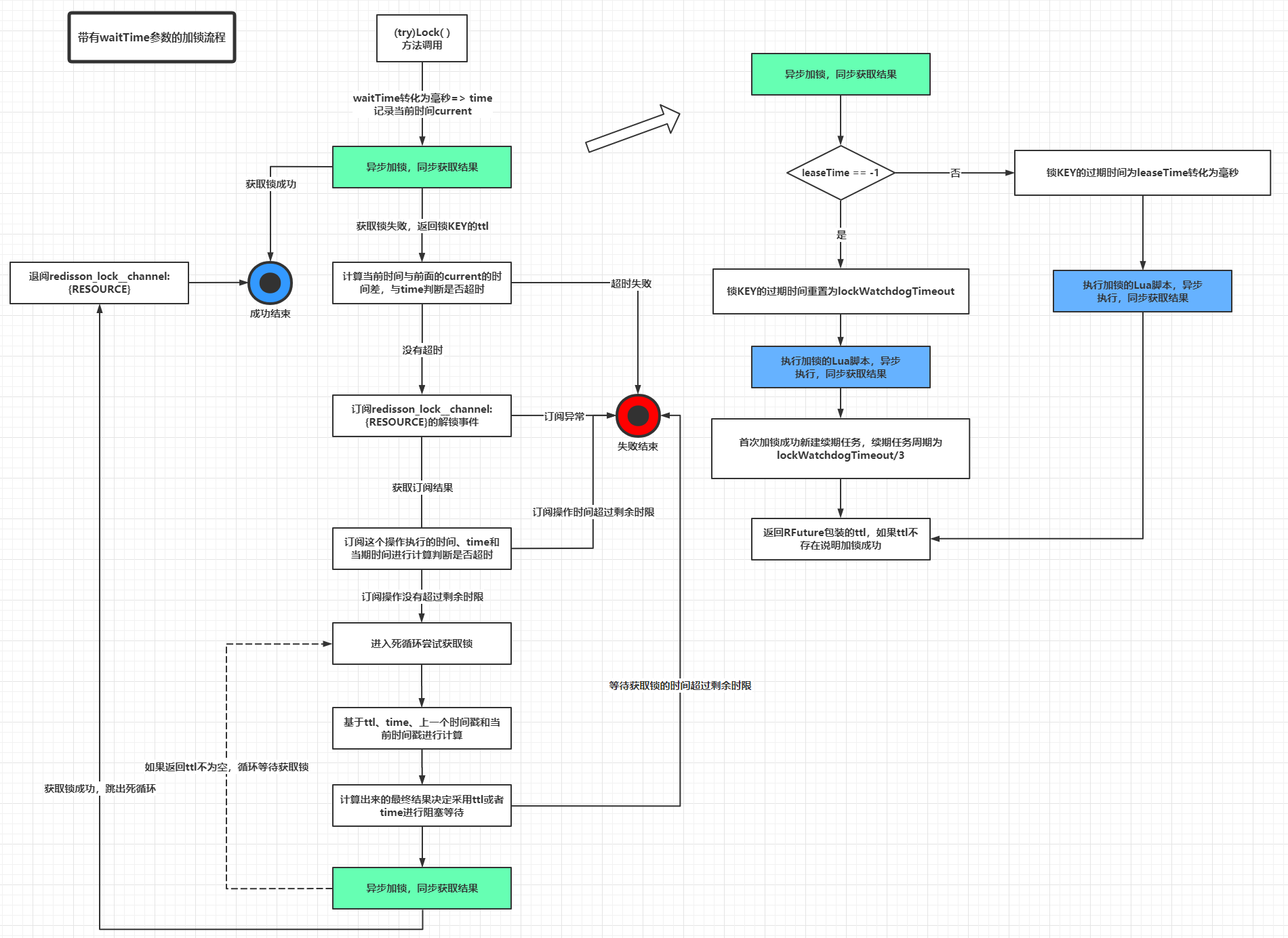 Assuming that two different threads X and Y of different processes go to compete for the lock on the resource RESOURCE, the possible flow is as follows. 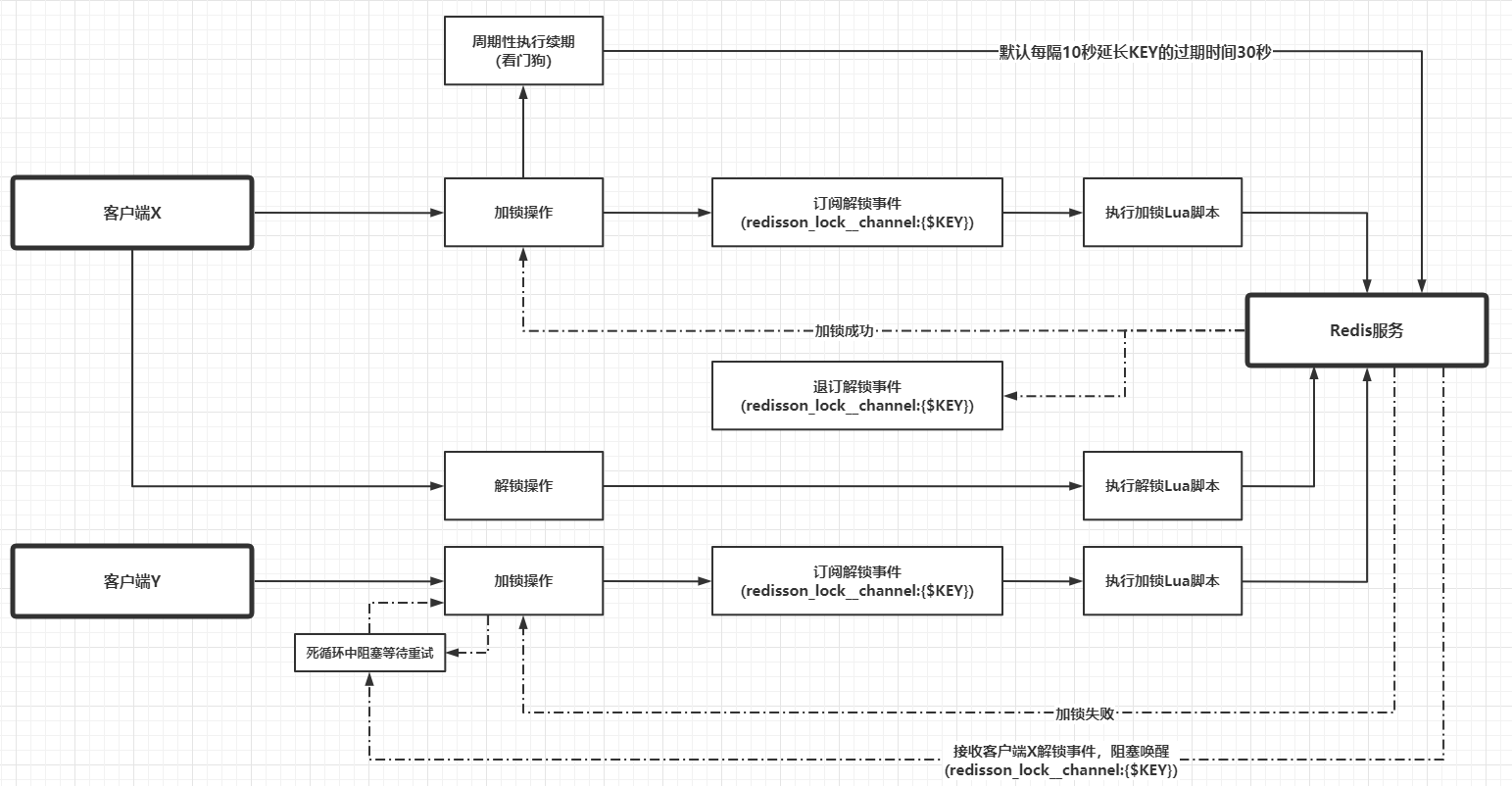 A final overview of the HASH data types used to implement the red lock algorithm in Redisson.

The previous sections have analyzed in some detail the principles of distributed lock implementation in Redisson, and a similar implementation is done here using Jedis and multi-threading techniques. For simplicity, only a non-referenced lock() method (similar to the Redisson scenario where releaseTime == -1) and an unlock() method are implemented here. Define the interface RedLock.

The above implementation was written in a short time, without doing detailed DEBUG, there may be mistakes. The result of a certain implementation is as follows.

The red lock implementation in Redisson applies to the following core technologies.

The above core technologies are applied in a reasonable manner to achieve an efficient and fault-tolerant distributed locking scheme, but from the current point of view, Redisson has not yet solved the failover defect in the red lock algorithm, which I believe may be an underlying defect in the Redis distributed locking scheme. Once applied to a Redis cluster (common master-slave, sentry or Cluster), there is a chance that the aforementioned node role switching will lead to the problem of multiple different clients acquiring the same lock corresponding to the same resource. There is no solution for now.