JavaScript is single-threaded and asynchronous operations are particularly important.

Node’s asynchronous syntax is more complex than the browser’s, because it talks to the kernel and has to make a special library, libuv, to do this. This library is responsible for the execution time of various callback functions, after all, asynchronous tasks end up back in the main thread, queued one by one. 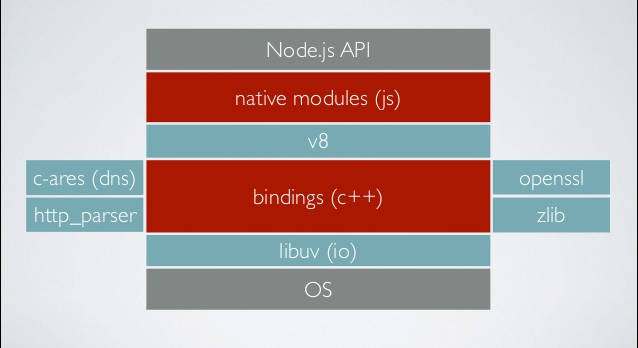 The first two are standard for the language, the last two are unique to Node. They are written in a similar way and serve a similar purpose, and are not very easy to distinguish from each other.

Can you tell the result of the following code?

If you can get it right in one sitting, you probably don’t need to read any further. This article explains, in detail, how Node handles various timers, or more generally, how the libuv library schedules asynchronous tasks to execute on the main thread.

In the previous section of code, only the last line is a synchronous task, so it is executed earliest.

Asynchronous tasks can be divided into two types.

The term “loop” refers to the event loop. This is how the JavaScript engine handles asynchronous tasks, and will be explained in more detail later. Just understand that the current loop must be executed before the next loop.

This means that the third and fourth lines of the code at the beginning of the text must be executed earlier than the first and second lines.

The name process.nextTick is a bit misleading, it is executed in the current loop and is the fastest executed of all asynchronous tasks.

After Node executes all the synchronized tasks, the task queue of process.nextTick will be executed next. So, the following line of code is the second output.

Basically, if you want asynchronous tasks to execute as fast as possible, then use process.nextTick.

According to the language specification, the callback function of the Promise object goes to the microtask queue inside the asynchronous task.

The microtask queue is appended to the process.nextTick queue, which is also part of the current loop. So, the following code always outputs 3 first and then 4.

Note that the next queue will be executed only after the previous queue has been emptied.

In the above code, all the callback functions of process.nextTick will be executed before Promise.

At this point, the execution order of the loop is finished.

5. The concept of event loops

The following is the order of execution of the second loop, which requires an understanding of what an event loop is.

“When Node.js starts, it initializes the event loop, processes the provided input script which may make async API calls, schedule timers, or call process.nextTick(), then begins processing the event loop.”

This passage is important and needs to be read carefully. It expresses three levels of meaning.

Second, when Node starts executing a script, it will initialize the event loop first, but at that point the event loop has not yet started and will complete the following things first.

Finally, after all of the above is done, the event cycle officially begins.

6. The six stages of the event cycle

The event loop is executed indefinitely, round after round. Execution stops only when the queue of callback functions for asynchronous tasks is emptied.

Each round of the event loop is divided into six phases. These phases are executed sequentially. 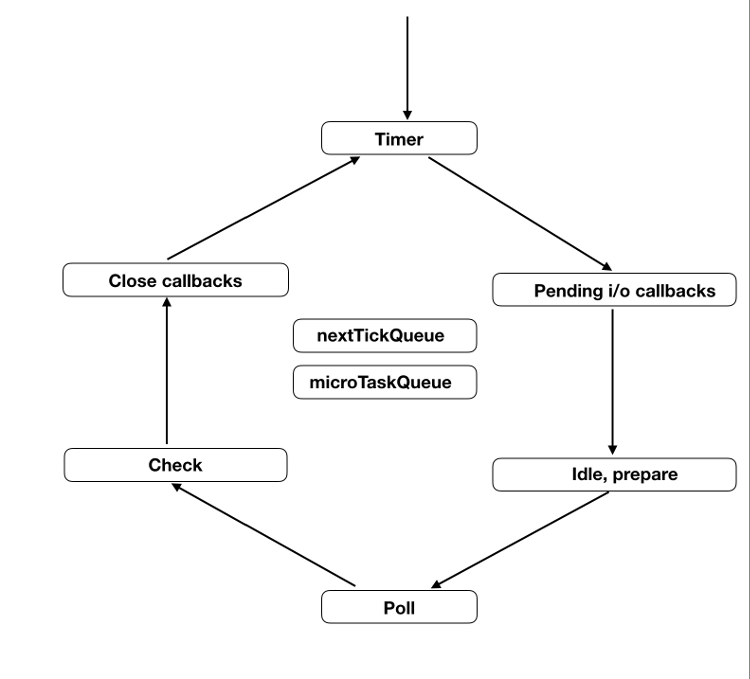 The following is a brief description of what each stage means. For details, see the official documentation, or refer to libuv’s source code interpretation.

This stage is only called internally by libuv and can be ignored here.

This phase is polling time for I/O events that have not yet been returned, such as server responses, user mouse movements, etc.

This phase can be quite long. If there are no other asynchronous tasks to process (such as expiring timers), it will stay in this phase and wait for I/O requests to return results.

This stage executes the callback function that closes the request, such as socket.on('close', ...) .

7. Example of an event loop

Here is an example from the official documentation.

The above code has two asynchronous tasks, a timer that executes after 100ms and a file read, whose callback function takes 200ms. what is the result? 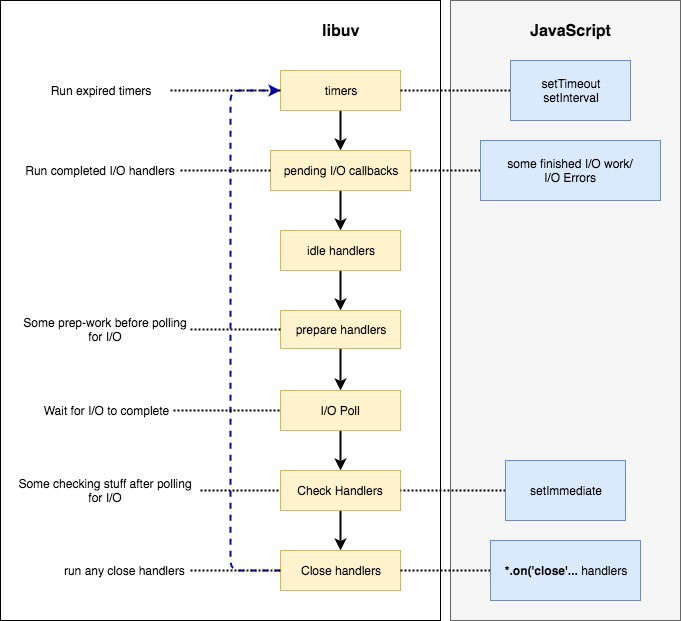 After the script enters the first event loop, there is no timer that expires and no I/O callback function that is already executable, so it enters the Poll phase and waits for the kernel to return the result of the file read. Since reading small files usually takes less than 100ms, the Poll phase will get the result before the timer expires, so it will continue to execute.

For the third event loop, there is already an expiring timer, so the timer will be executed in the timers phase. The final output is about 200ms or so.

However, the following code must output 2 first, then 1.

The above code will enter the I/O callbacks phase first, then the check phase, and finally the timers phase. Therefore, setImmediate will be executed before setTimeout.