GoReplay is written in Go and has a single executable file, which can be downloaded from the official Release page and placed in the PATH directory.

The overall use of the GoReplay command line is to specify the input and input side, and then GoReplay copies the traffic from the input side to the output side.

The GoReplay input can specify a tcp address, and GoReplay will then copy the traffic from that port to the output; the following example shows copying traffic from 127.0.0.0:8000 and outputting it to the console.

then have gor listen to the same port, --output-stdout specifying the output as the console

At this point, accessing python’s HTTP Server via curl shows that gor copies the HTTP request and outputs it to the console Also if we specify the output side as another HTTP Server with the -output-http option, then gor will synchronize the request and send it to the output HTTP Server. 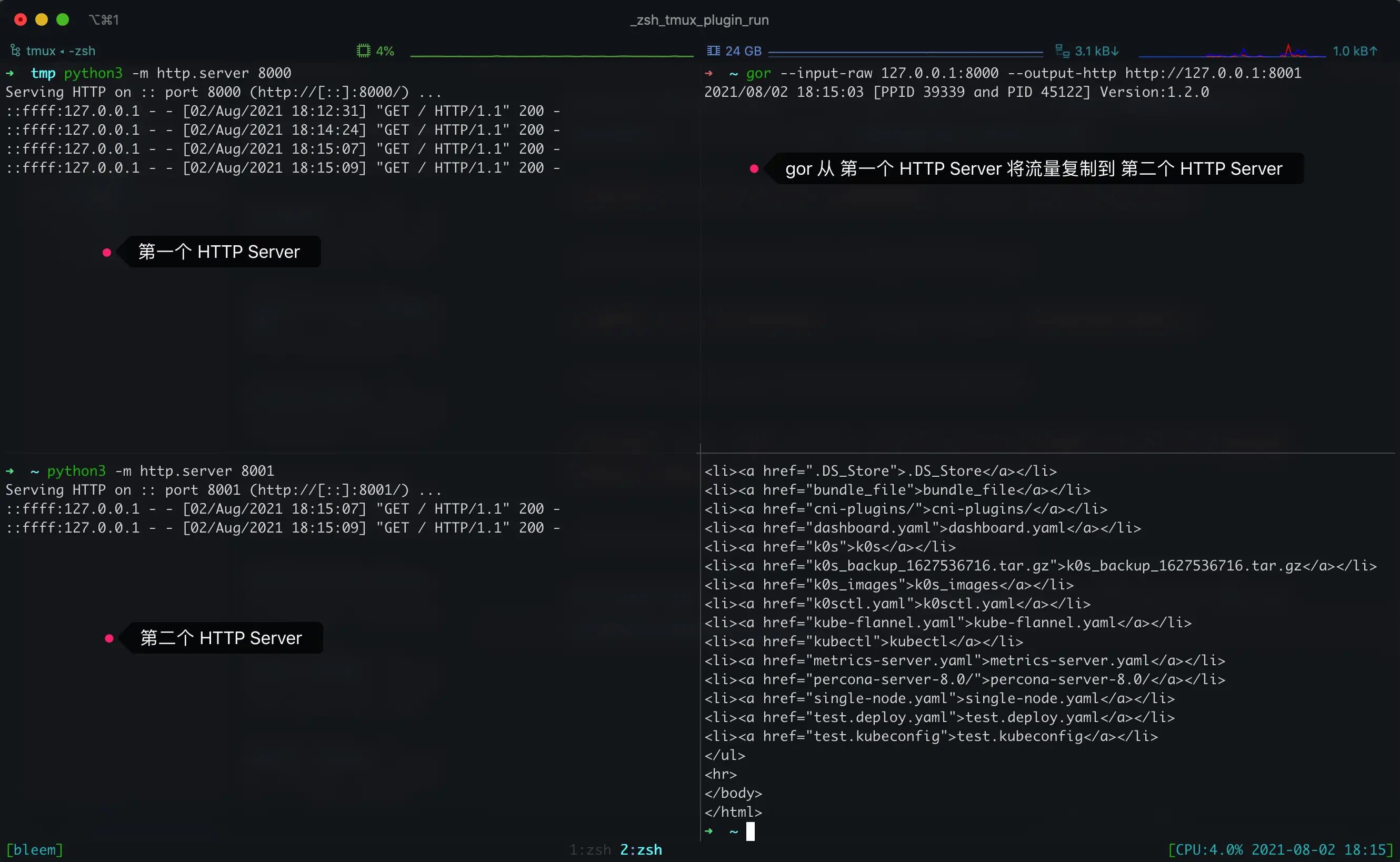 GoReplay can save traffic to a file by specifying the output as a file, and then GoReplay reads that saved traffic file and redeploys it to the specified HTTP Server. When saving traffic to a file, by default GoReplay writes to the file in blocks and each block will generate a separate file name ( test_0.gor ), if you want to write all blocks of traffic to one file, you can set --output-file-append to true.

When there are many requests, saving the traffic to a file may result in a large file, so you can use the .gz ending as the file name, and GoReplay will automatically compress it with GZip when it reads the .gz suffix.

GoReplay uses a relatively low-level packet interception technique, where the kernel GoReplay intercepts a TCP packet when it arrives; however, packets can arrive out of order, and then the kernel needs to rebuild the TCP stream to ensure that upper-layer applications can read TCP packets in the correct order, at which point the kernel has a buffer of packets; by default, Linux systems have a buffer of By default, Linux systems have a buffer of 2M and Windiws have a buffer of 1M. When a particular HTTP request packet exceeds the buffer, GoReplay cannot intercept it properly (because GoReplay needs a complete HTTP request packet for saving to a file or replaying), and it may cause problems such as lost requests, corrupted requests, etc.

Absolute number limit: With parameters of the form -output-http "ADDRESS|N", GoReplay guarantees that the mirrored traffic will not exceed “N” requests per second.

Percent limit restriction: With parameters of the form -output-http "ADDRESS|N%", GoReplay ensures that mirrored traffic is maintained at “N%” of the total traffic.

Here is a sample of the official command:

Host header is a special request header, by default GoReplay will automatically set it to the domain name of the target replay address, if you want to turn off this default behavior use the -http-original-host option

If there are multiple relay servers, you can use the -split-output option to have each GoReplay that grabs traffic send traffic to each relay server using a polling algorithm:

GoReplay supports setting the output side to ElasticSearch:

There is no need to create indexes before exporting to ES, GoReplay will do it automatically and the data structure after exporting to ES is as follows: