As a Go novice, I’m curious to see any “weird” code; for example, I recently saw a few methods; the pseudo-code is as follows.

I believe that most newcomers to Go are confused when they see this code, the most confusing of which is

This declaration of a slice, without looking at the next two ways of writing it, is quite understandable when looking at []*T alone. The slice holds the memory addresses of all T, which is more space-efficient than storing T itself, and []*T can modify the value of T inside the method, while []T cannot.

For example, the above example prints

Only by modifying the method to

to modify the value of T:

Let’s focus on the difference between []*T and *[]T, where two append functions are written.

Looking at the first one first, the output is the result of

It shows that the modifications inside the function can affect the outside during function passing.

Here we look at another example.

The end result is

There is no impact to the outside.

And when we adjust it a bit more, we find that it is different again.

You can see that if you pass a pointer to a slice, using the append function to append data will affect the outside.

Before analyzing the above three cases, let’s understand the data structure of slice.

A direct look at the source code shows that slice is actually a structure, but it is not directly accessible to the public.

There are three important attributes.

When it comes to slicing, one has to think of arrays, which can be understood as follows.

Slicing is an abstraction of arrays, and arrays are the underlying implementation of slicing.

In fact, it is easy to see by the name slicing that it is cutting a part of the array; as opposed to the fixed size of the array, slicing can be expanded according to the actual usage.

So a slice can also be obtained by “slicing” the array.

where the length and capacity of x1 are 6.

Since slice x2 is a reference to array x1, the underlying array excluding the left position that is not referenced is the maximum capacity of the slice, which is 5.

Take the code just shown as an example.

During function passing, the x in main is referenced by the same array as the x slice in the appendA function. 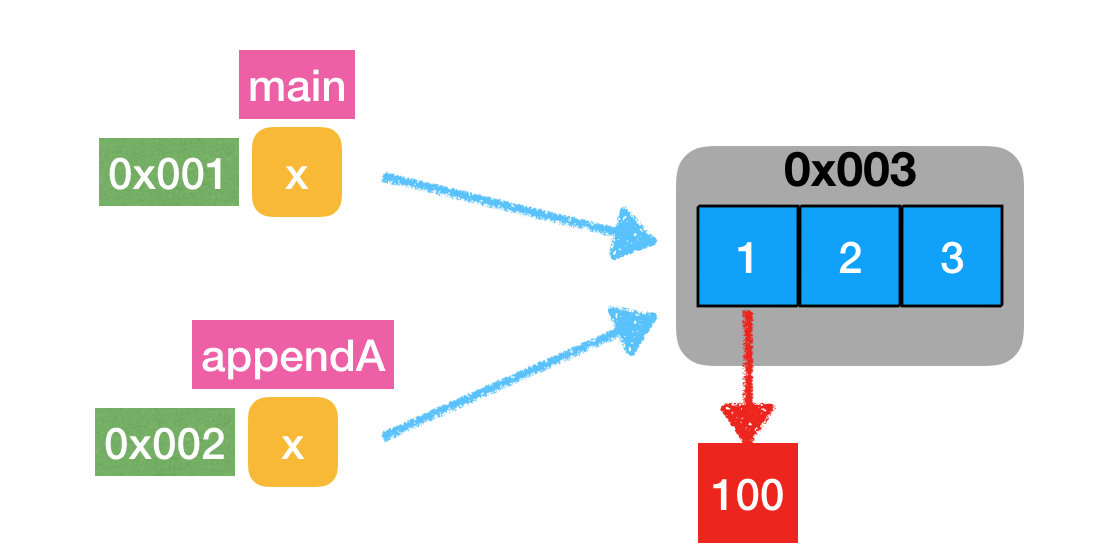 Essentially the same block of memory data is being modified.

In the above example, after calling the append function in appendB to append data, you will find that the main function is not affected, here I have slightly adjusted the sample code.

The main reason is the modification of the slice initialization method, so that the capacity is greater than the length, the specific reason will be explained subsequently.

The data in the main function does seem to be unaffected; however, those who are careful will notice that the length of x in the appendB function changes from +1 to 4 after append().

In the main function, the length is changed back to 3.

This difference in detail is why append() “seems” not to work; as to why it “seems”, the code has been adjusted again to

On top of that, a slice is made based on x after append; the scope of the slice is all the data in the array referenced by x.

You will magically find that y prints out all the data, and the data appended in the appendB function has actually been written to the array, but why doesn’t x itself get it? 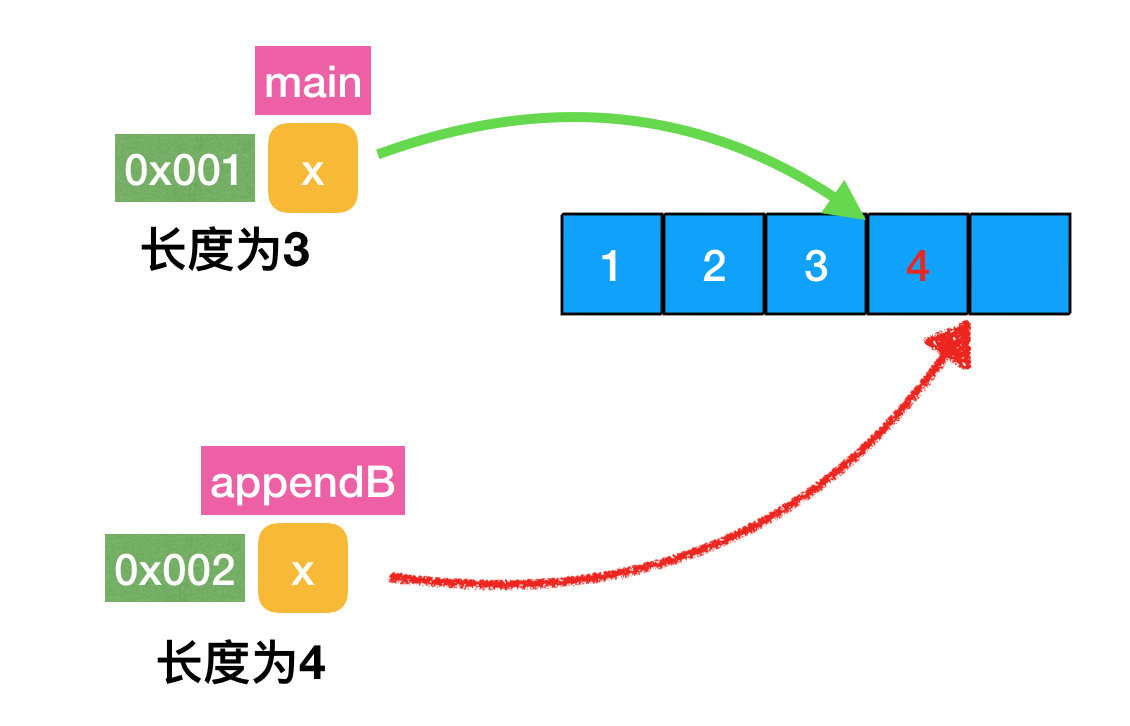 It is easy to understand by looking at the figure.

So the essential reason here is that slice is a structure, which is passed as a value, and no matter how the length is modified in the method, it does not affect the original data (in this case, the length and capacity properties).

It was specifically mentioned earlier that the example here is slightly altered, mainly by setting the capacity of the slice to exceed the length of the array.

What happens if this special setting is not made?

At this point, you will find that the y slice data in the main function has not changed either, why is this?

This is because the length and capacity of the initialized x slice is 3. When appending data in the appendB function, we find that there is no more room.

This is when the expansion is done.

Again, since this is value passing, slicing the underlying array in appendB has no effect on the slices in the main function, which results in no change to the data in the final main function.

Is there any way to have an external impact even during expansion?

The output results are.

This is when external slices can be affected, and the reason is actually quite simple; the

As I said earlier, since slice itself is a structure, when we pass a pointer, it’s the same principle as the usual custom struct that modifies data inside a function via a pointer.

I believe that the use of slices will find very similar to Java in the ArrayList, the same is based on array implementation, will also be expanded to occur data copy; so it seems that the language is only the choice of the upper layer use, some common underlying implementation of everyone is similar.

At this point we then look at the title []*T *[]T *[]*T will find that there is no connection between these, just look like easy to bluff.