Mocking data is an inevitable requirement in the collaborative development process with separate front and back ends. There are many mature solutions for data mocking in the common http way, but it becomes more complicated for websocket push mode.

Here we share the data request mock solution for websocket services with the help of simple-mock plugin library.

In the case that no other roles such as product and back-end are involved and only front-end development is facilitated, I personally prefer a simple and lightweight data MOCK solution that does not invade the front-end project, so I developed simple-mock based on the development pattern of front-end business at work. simple-mock) plug-in library. The solution provided by simple-mock is mainly based on the following requirement points.

Can be injected into an existing Server

The initial purpose of simple-mock is to implement Server-level Mock functionality without changing the existing architectural model. So simple-mock implements and exports two methods simpleMock.render and simpleMock.saveApi for users to call, and implements the specific mock logic framework internally.

Currently, various popular mock solutions require front-end staff to make their own mock rules due to their feature-richness, and the initial cost of introducing them in existing projects is relatively high, and there is also a certain learning cost.

simple-mock saves the returned data according to the configuration file rules by exporting the simpleMock.saveApi method to the user when the server-side API proxy data is returned. By automatically saving the returned data from the backend through the proxy mode, manual mock rule making is reduced, which makes the introduction cost relatively low. You only need to write some public correction rules (if there is no special interface logic or even this step can be omitted), you can quickly realize the complete MCOK development of the whole site.

In the MOCK development process, you only need to focus on the business-related data interfaces currently being processed, and write targeted Javascript logic to achieve custom data MOCK.

The configuration file and the mock file both come in as the nodejs module require, because the require mechanism has a cache, which causes the file to be modified only after a restart to take effect, while simple-mock, which only provides an API as a plugin, obviously does not have the ability to restart the server.

In local development mode, the memory consumption requirement is not too high, so simple-mock implements a simple caching mechanism internally, and removes the cache using the delete require.cache[filename] method when the relevant file is found to be modified (note that this approach may lead to memory leaks unless there is a good object release control logic, not recommended in production environments), thus achieving the effect of require taking effect immediately after the file is modified again.

mock for some interfaces

When the mock function is turned off (setting config.isEnableMock=false), the config.enableMockFilter parameter method can be used to define rules that can still be turned on. This is useful for scenarios where MOCK debugging is only done for a single interface with different parameter values. Example.

When mock is enabled (set config.isEnableMock=true), the config.disableMockFilter parameter method can be used to define rules that still do not use mock. This is useful for scenarios where you need to debug or compare some of the online interfaces in a mock development situation. Example.

The above briefly describes the main purpose and design idea of simple-mock. For http one-answer requests, simple-mock is a good solution for lightweight mock development patterns.

For websocket subscription and push mode, we can also reuse the mock idea of simple-mock in http-oriented one-answer mock, but the difference lies in how to save the data of different subscription requests, how to simulate multiple data sending after one subscription, etc. 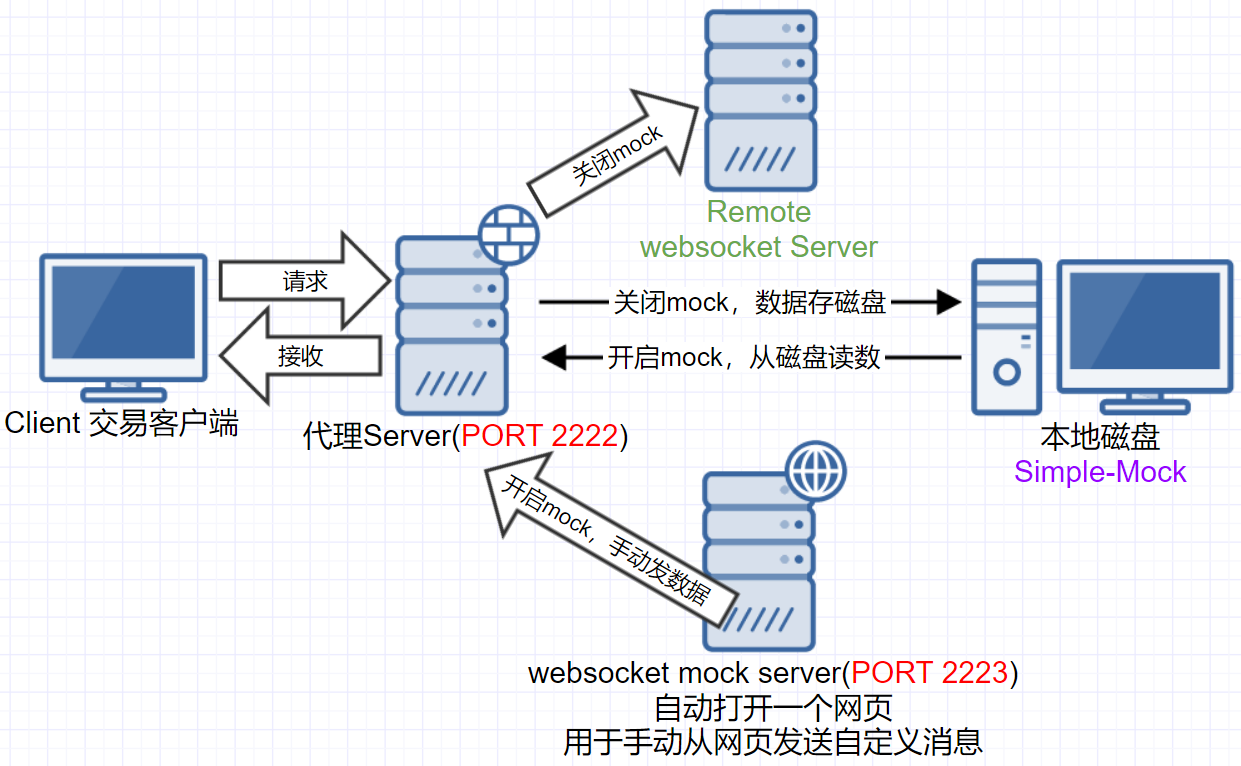 Generally speaking, except for the data pushed by the server broadcast mode, for sending requests need to wait for the return of data in common mode, because of the need to distinguish between different data responses, websocket client data sent to the server data returned between the basic need to correlate according to certain field values, based on this correlation rules, you can configure parameters to achieve mock Based on such association rules, mock logic can be implemented by configuring parameters such as file name customization, data generalization, etc., which basically remains unchanged in the specific mock framework. The main points of simple-mock for this logic are.

One-Question, One-Answer, One-Question, Many In specific business processes, the one-question, one-answer, one-question, many-answer pattern is still more and more predominant, for example, sending a message, the server correspondingly returns one or more messages.

The sent and returned messages need to be matched, which generally sets a uuid unique identifier field in each answer for matching. The config.handlerBeforeMockSend parameter can be used to handle this public logical relationship, and the config.customSaveFileName parameter is used to handle the correspondence between the request and the local file.

This example shows a scenario where a single request requires multiple messages to be returned. The client is the second parameter passed to the simpleMock.renderWs method, which can be passed directly to the ws client handle, or you can implement its related interface to achieve more customization capabilities.

During the initial login process, you may need to load a lot of information. The logic for receiving this information can be fixed as public rules, which are written in the mock/mockdata directory and then committed to the Git repository to be shared with all developers.

In addition, you may need to write public rules for some public messages to be loaded in order for the application to work properly.

For unsolicited, pure push messages, a simple way is to enable a timer (setInterval/setTimeout) at startup to send messages to the client at regular intervals (pay attention to the management of the timer to avoid memory leaks). For example, read the contents of a json file in a specified directory at regular intervals and send it as a message. Only need to delete the file or modify the content of the file to meet the simple needs.

In the development process, the main purpose of Mock for push messages is for functional debugging, so it is more convenient to open a web client to send mock numbers manually. The following example is shown. 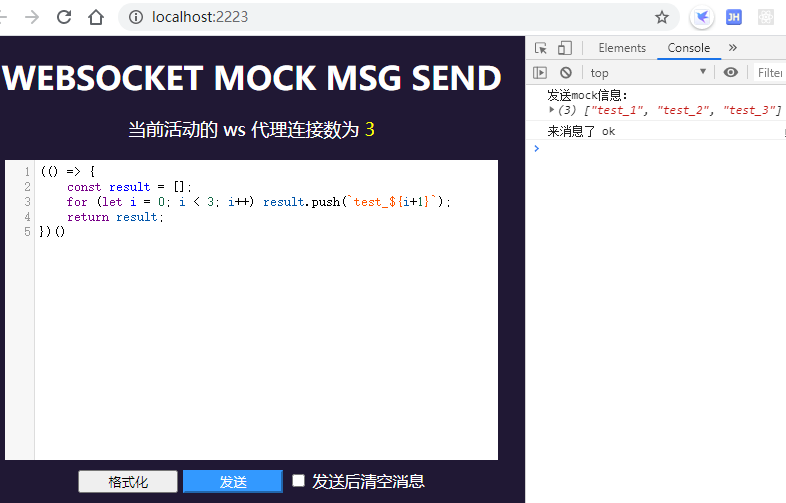 This implements the basic mock logic for the websocket service. A concrete example is available in the simple-mock source repository ws-proxy-server.