What is an exception?

When an uncaught exception occurs, Python will end the program and print a stack trace message, along with the exception name and additional information. The details are as follows.

Broadly speaking, errors are classified as errors and exceptions

The main purposes of catching and handling exceptions in Python are.

Python comes with a very powerful exception handling mechanism, providing many built-in exception classes that provide accurate feedback to the user. Python automatically puts all exception names in a built-in namespace, so programs don’t have to import the exceptions module to use exceptions.

We can’t guarantee that the programs we write will always run correctly, and the purpose of exception catching and handling is to ensure that the worst-case problems the program gets are managed properly.

In Python, exceptions are caught and handled with try except statement blocks, the basic syntactic structure of which is shown below. 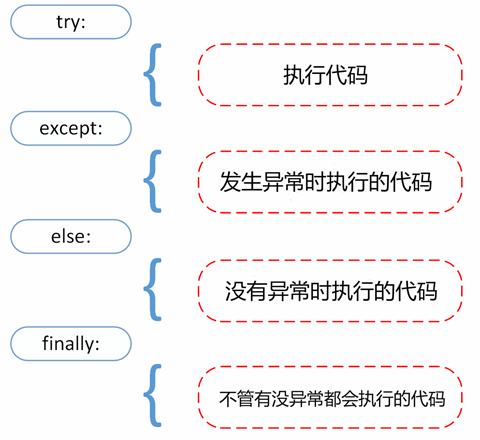 The way try works is that when you start a try statement, python marks it in the context of the current program so that you can return to it when an exception occurs, the try clause is executed first, and what happens next depends on whether an exception occurs during execution.

The Exception class is the parent of all Python exception classes, so except Exception will be able to catch any exception; in other words, it is the catch-all exception handling syntax. There is one kind of error that there is no way to catch: indentation errors.

Sometimes an exception can be used as a flag for code to run, and by proactively triggering an exception you can change the course of the code, thus improving code robustness.

The active trigger exception requires the raise keyword, which has the following syntax structure.

Python assert is used to determine an expression and trigger an exception if the condition of the expression is false. Assertions can return an error directly if the condition is not met, without having to wait for the program to run and then crash. For example, if our code can only run on Linux, we can first determine if the current system meets the condition.

The syntax format is as follows.

assert looks good, however it is not pleasant to use. For example, someone tells you that the program is wrong, but doesn’t tell you what’s wrong. Many times such assert is better than not writing it at all. A common solution is to use a testing framework or other packages instead: py.test, unittest, ptest, assertpy…

The output of try…except… only lets you know that the error was reported, but not in which file, function, or line. Using the traceback module, you can get a very clear picture of where the error is.

Python programs get their traceback information from an object called the traceback object, which is usually obtained through the function sys.exc_info().

As we can see from the above example, sys.exc_info() gets the information about the currently handled exception and returns a tuple, the first data of the tuple is the type of the exception, the second return value is the value of the exception, and the third is the traceback object.