Android CameraX is designed to help you simplify the development of camera applications. As development of CameraX continues, camera app developers have shown us their passion and enthusiasm, and many great ideas have been incorporated into the current API, such as the laudable CameraX Extensions API. Recently we have taken input from the developer community and refactored the extensions, and now there is a new ExtensionsManager, you can use these extensions with just two lines of code! This article will describe how to use the Extensions API in your application.

Android devices come with powerful cameras, and manufacturers have put a lot of effort into incorporating many cutting-edge functional features or special effects into these camera devices. In the past, these powerful features were only available from the device’s native camera app. Now, with the CameraX Extensions API, third-party developers can access these powerful camera features through a common, simple interface. 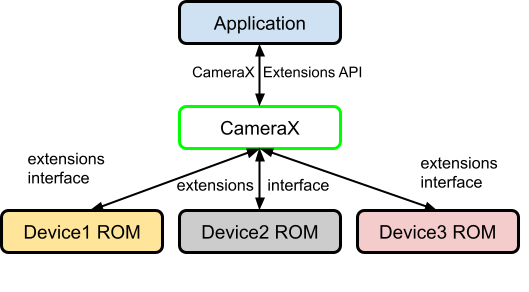 Version 1.0.0 of CameraX Extensions includes some of the most common built-in camera effects:

Let’s take a look at a couple of photos taken on an Android phone with the effects provided by the CameraX Extensions API enabled and disabled when taking photos. △ Fig. 1: The BOKEH effect is enabled for the photo on the right.

△ Figure 2: The right photo is enabled with HDR effect.

△ Figure 3: The NIGHT special effect is enabled for the right photo.

The visual difference is obvious. You can use the CameraX Extensions API to implement these image effects in your own applications.

Now let’s see how to integrate CameraX’s API into your application.

In an existing CameraX application, you can first add CameraX Extensions by introducing the camera-extensions Jetpack library:

Next, integrate Extensions by following these steps. 1:

The first step is to get an instance of ExtensionsManager using the getInstance(Context) API of the extension library. This API returns a ListenableFuture, which we can use in the Kotlin pending function to get the result using await() to avoid blocking the main thread. (Note: Using await() on ListenableFuture requires the introduction of the androidx.concurrent:concurrent-futures-ktx: 1.1.0 dependency).

With ExtensionsManager, you can determine whether a device supports a particular extension mode and get a CameraSelector for it with extensions enabled. Please note the following points:

With the ExtensionsManager, use the isExtensionAvailable(CameraProvider, CameraSelector, int) function to check the availability of the extension: If any camera filtered by CameraSelector exists on the device that supports the queried extension, then true is returned, otherwise false is returned.

Get the extended CameraSelector enabled

The full code of the Extensions API example is as follows:

The CameraX Extensions API is implemented in the camera-extensions library and it relies on the CameraX core modules ( core, camera2 and lifecycle). When using CameraX Extensions, be sure to use the version from the same distribution as the CameraX core module you are using. For example, to use camera-extensions:1.0.0-alpha28, you must include the 1.0.0-alpha08 versions of camera-lifecycle, camera-core and camera-camera2 in your application’s dependency list, as they were released on released in the same package on August 18, 2021.

In addition to the list of devices that support extensions, starting with Android 12, you can also determine if your device supports CameraX Extensions by checking the Android property ro.camerax.extensions.enabled.

An older version of the Extensions API released in August 2019 is now deprecated. This older version of the Extensions API provides extender classes that require extension-related configuration to be applied to each Preview and ImageCapture use case. The old extender design could cause developers to forget to enable extension mode on Preview or ImageCapture and could lead to unintended behavior.

The new CameraX Extensions library was introduced in 1.0.0-alpha26. The newer Extensions API makes it easier to use by switching the extension binding from the use case to the target camera. Please be sure to migrate to take advantage of the new Extensions API.

A special thanks to the amazing Android camera developers and device manufacturers who helped implement the CameraX Extensions API! If you’d like to stay up to date on CameraX developments, please join the Android CameraX Discussion Group.