CentOS 7.0 has replaced the original firewall iptables with FirewallD, which supports IPv4, IPv6 firewall settings and Ethernet bridging, and has both runtime and permanent configuration options, and is called a dynamically managed firewall, meaning that changes can be applied without restarting the entire firewall. firewalld is installed by default, if not, execute yum install firewalld firewalld-config to install it, where firewalld-config is a GUI tool.

iptables, firewalld, and other software do not have firewall functions, but they manage and maintain rules in user space, but the rules structure and usage are different. engine introduced in the Linux 2.4 kernel. It consists of packet filtering tables that contain the set of rules used by the kernel to control packet filtering. iptables, firewalld, etc. are all convenient tools for modifying filtering table rules in user space.

Linux internal structure can be divided into three parts, from the bottom to the top: hardware->kernel space->user space 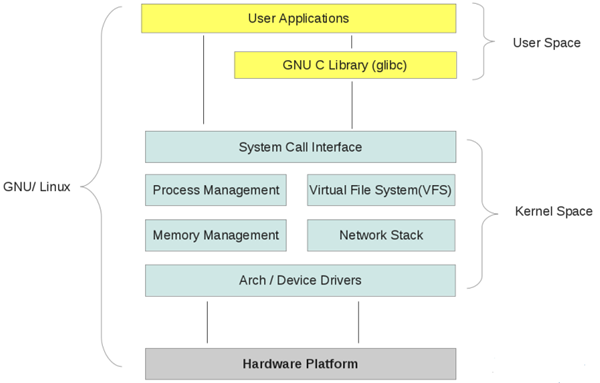 netfilter has a total of 5 control gates at locations where packets must pass through and rules can be read. The inspection rules at these five gateways are placed in five rule chains.

Chains are actually checklists containing numerous rules, and each chain contains many rules. When a packet arrives at a chain, the system starts checking from the first rule in the chain to see if the packet satisfies the conditions defined by the rule. If it does, the system processes the packet according to the method defined by the rule; otherwise, it continues to check the next rule, and if the packet does not meet any of the rules in the chain, the system processes the packet according to the chain’s pre-defined default policy.

When a packet enters the NIC, it first enters the PREROUTING chain, and the kernel determines whether it needs to be forwarded out based on the packet’s destination IP. If the packet is the one coming into the machine, it moves down the graph to the INPUT chain. Once the packet arrives at the INPUT chain, any process will receive it. Programs running on this machine can send packets that go through the OUTPUT chain and then arrive at the POSTROUTING chain output. If the packet is to be forwarded out and the kernel allows it, the packet will move to the right as shown in the figure, go through the FORWARD chain, and then reach the POSTROUTING chain output 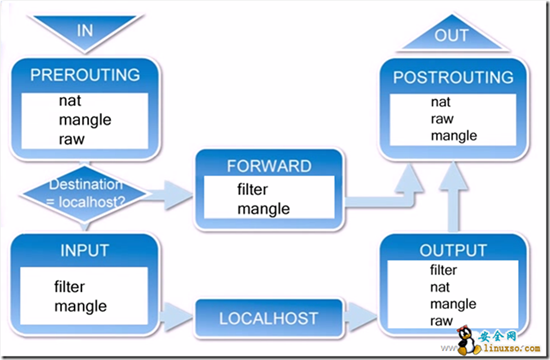 As you can see, the packets just entering from the network interface have not yet made routing decisions and do not yet know where the data is going, so there is no way to implement data filtering at the import and export, so you need to set forwarding gates, entering user space gates and leaving user space gates in kernel space.

iptablses slices each of the five chains into five different tables according to purpose and usage. This means that each table can be configured with separate rules for certain chains as needed. For example, the mangle table and the filter table can both be configured with rules for INPUT chains, and when packets flow through the INPUT location (into userspace), the rules for the INPUT chains in both tables are used to do filter checks. 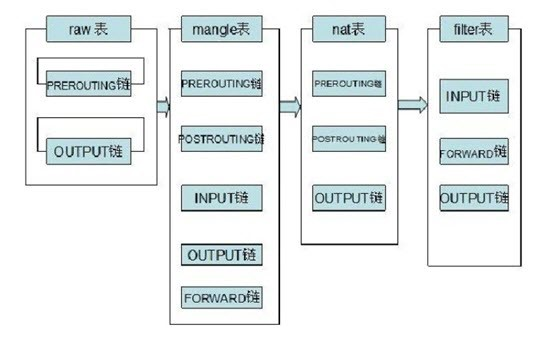 Five tables, each focusing on a different function

iptables also supports custom rule chains. The custom chain must be associated with a particular chain. Rules can be set in a chain, and packets that meet certain conditions jump to a certain target chain for processing, and then return to the current chain to continue processing subsequent rules after the target chain has finished processing. Because the rules in the chain are checked sequentially from the beginning to the end, the order of the rules is very important. The stricter the rule should be the more forward.

The default table name is FILTER. the serial numbers (RULENUM) used in the command are based on 1.

Basic match: (you can use ! can negate a subclause, such as -p !tcp)

FirewallD is related to iptables. 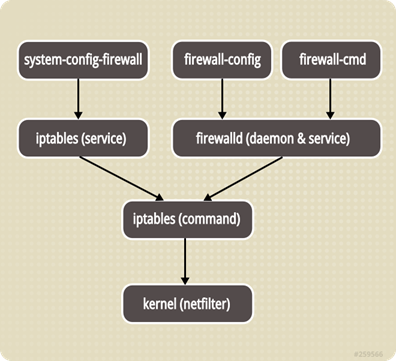 The underlying firewalld is still based on iptables, but there are still many differences.

RHEL7, however, seems to be implemented in the same way as iptables, but unlike mariaDB, which is compatible with MySQL commands, FirewallD cannot resolve firewall rules added by the ip*tables and ebtables command line tools

FirewallD is managed using the concept of zones, one for each NIC, and the configuration files for these zones can be found under /usr/lib/firewalld/zones/, with the default being public.

The priority of the filtering rules follows the following order

This means opening ssh (22), http (80), https (443) ports in the public zone, which corresponds to each of the service types defined in the *.xml file under /usr/lib/firewalld/services/, for example, the http.xml file is as follows.

So it can also be done directly in public.xml like this.

Each time you change the configuration file or more trouble, firewalld can use firewall-config and firewall-cmd for configuration, the former is due to the GUI mode, the latter for the command line tools, some common commands are as follows.

Some common parameters of the commands are described as follows