In Internet applications, many times we need real-time message interaction between the client and the server, such as the following scenarios.

Next, let’s take a look at the common technical solutions for real time messaging implementation in web development, each of which has its own advantages and disadvantages and different options for different application scenarios.

Real-time push technology in the Web domain, also known as Realtime technology. The goal of this technology is to allow users to get real-time updates without refreshing their browsers. It has a wide range of application scenarios, such as online chat rooms, online customer service systems, commenting systems, WebIM, etc.

The HTTP protocol has one characteristic: passivity. What is passivity? In fact, the server cannot initiate contact with the client, it can only be initiated by the client. For example, if we want to get some data, we have to send a request from the client (such as a browser) to the server, and the server returns the query result. HTTP protocol can’t do that the server actively pushes information to the client, such as the alert of receiving new emails. This one-way request feature predetermines that if the server has continuous state changes, the client will be very troublesome to be informed.

Before the WebSocket protocol, there were three ways to implement two-way communication: polling, long-polling, and iframe streaming.

The principle of polling is very simple, let the browser send a request every few seconds to ask the server if there is any new information. 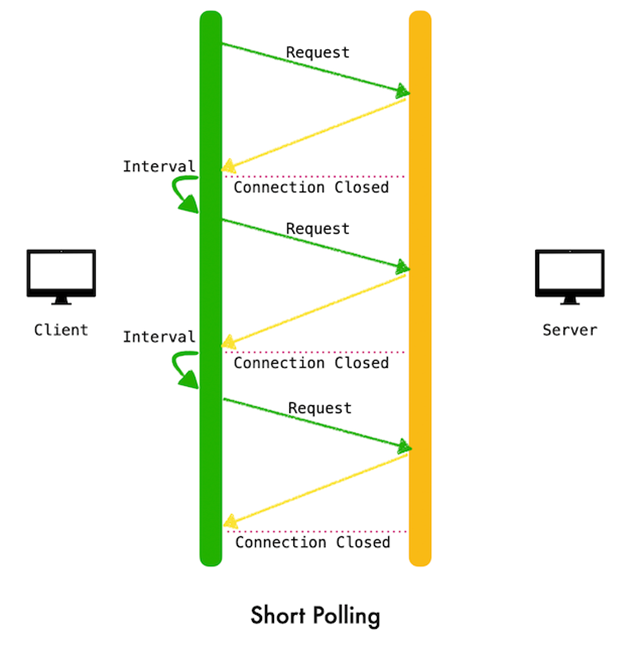 The client regularly requests the server to ask if a new message is generated, in this case the client has to establish an http connection for each request and the server has to generate a response message.

As you can see, using polling, the connection between the client and the server will always be made, asking for it every so often. The disadvantage is also obvious: the number of connections will be many, one receiving and one sending. And every time a request is sent, there will be a Header of Http, which will be very traffic-consuming and will consume CPU utilization.

Long-polling in fact, the principle is similar to polling, are using the polling method, but the adoption of the blocking model (keep calling, do not hang up if you do not receive), that is, the client initiates a connection, if there is no message, it does not return Response to the client. It does not return until there is a message, and after it returns, the client establishes a connection again, and so on. 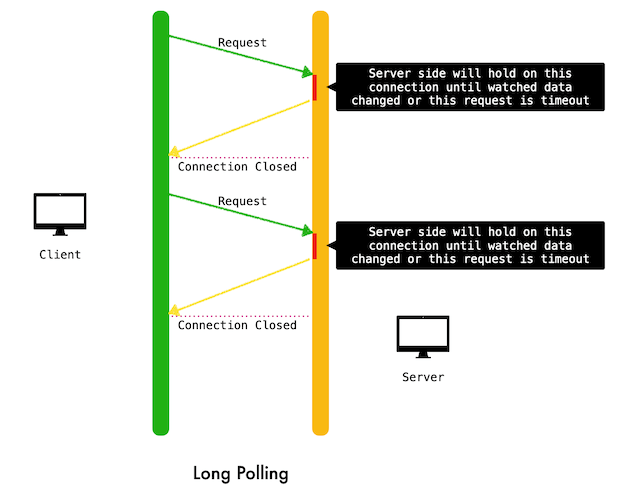 Or, in the vernacular, for example.

Essentially, long polling is an improved version of polling, where the client sends HTTP to the server and then sees if there is a new message, and if there is no new message, it waits. When there is a new message, it will be returned to the client. To some extent, this reduces the network bandwidth and CPU utilization problems. Since http packets often have a large amount of header data (usually more than 400 bytes), but very little data is actually needed by the server (sometimes only about 10 bytes), such packets are transmitted periodically on the network, which is inevitably a waste of network bandwidth.

Compared with the above polling mode.

Advantages: messages arrive at the client in a more timely manner; reduces the unnecessary waste of http requests constantly created and closed into. Long-polling supports most current browsers.

Disadvantages: The server side needs to maintain a large number of connections, the maintenance overhead of http connections is large; each time a message is generated, the connection needs to be recreated.

Implementation: The client simply sends a request and waits for a response. The server side needs to do two things: one is to maintain a large number of connections (Non-Blocking I/O); the other is to read the background message updates (asynchronous timing polling or triggered by events). Is a near real-time asynchronous approach.

In this case, the client maintains a persistent connection with the server, and new messages are continuously returned to the client through this persistent connection when they are generated on the server side. This mode is similar to long polling above, the difference is that only one connection needs to be created. Also, note that the http header needs to set the attributes Connection: keep-alive and Transfer-Encoding: chunked. Compared to longpolling mode above.

The essence of SSE is actually an HTTP long connection, except that instead of sending a one-time packet to the client, it sends a stream in the format of text/event-stream, so the client will not close the connection and will keep waiting for the server to send a new stream, and video playback is an example of this. 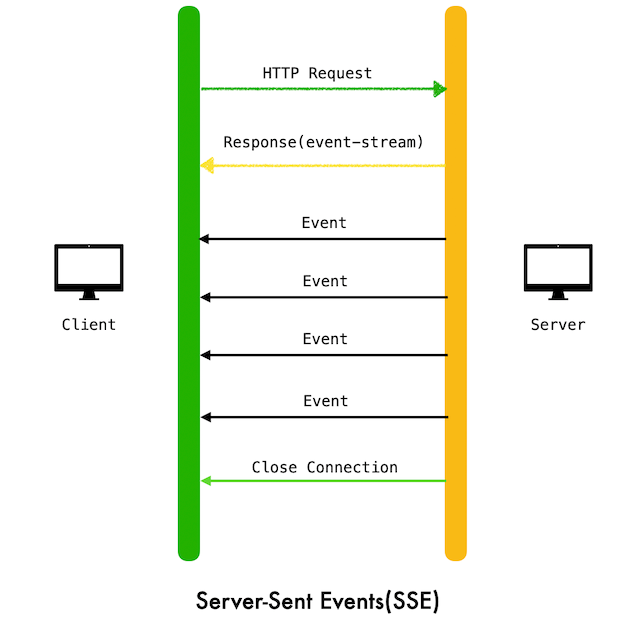 WebSocket was born in 2008, became an international standard in 2011 and is now supported by all browsers (see Quick Start for Beginners: A Concise Tutorial on WebSocket for more details). It is a new application layer protocol, a true full-duplex communication protocol designed specifically for web clients and servers, and can be compared to the HTTP protocol to understand the websocket protocol.

Diagram of the relationship between the two and TCP. 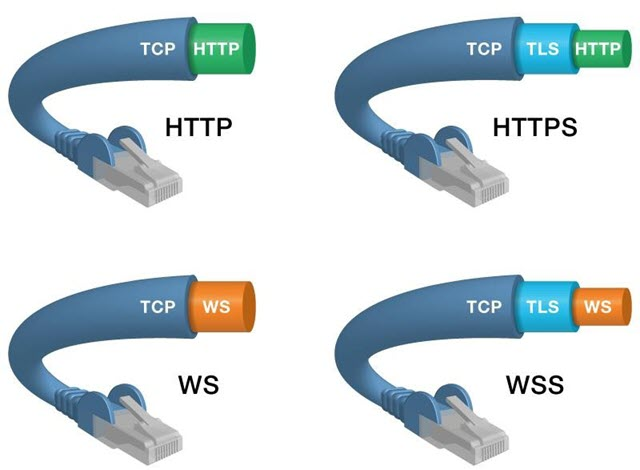 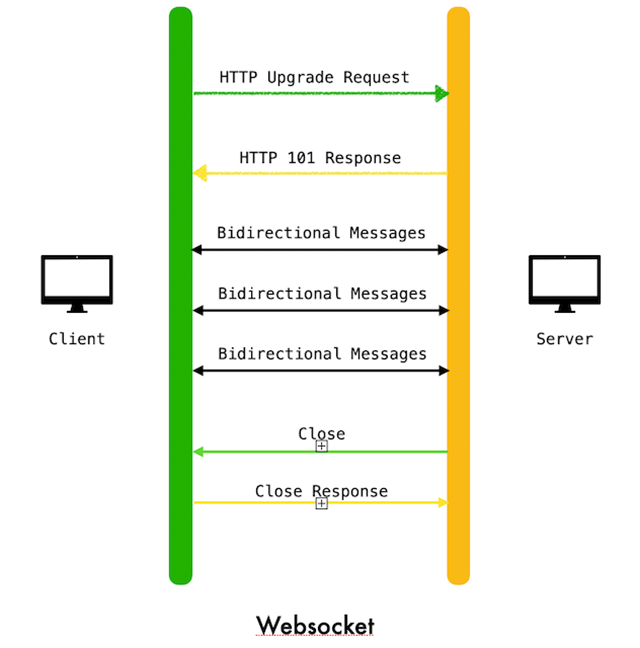 If you think this is not enough and want to learn more, you can refer to the following documents and manuals

How to choose a solution?

In our practical application, how should the various schemes be chosen?

polling polling mechanism is very simple, easy to use, are http short connection, in the application architecture and ordinary interface api consistent, very suitable for small applications and just starting applications, can save a lot of development costs.

When the number of users rose to a certain level (such as daily activity of a million), the product has become more and more popular, we have higher requirements for the timeliness of the arrival of messages, and this polling mechanism is a test of the pressure on the server, then we can consider the long polling or http streaming way, these two ways in fact in the server-side implementation is similar, mainly to maintain a large number of long connections and asynchronous (or event-triggered) to get the message.

In terms of keeping connections, after the advent of java’s nio, which provides us with convenience, mainstream application servers like tomcat and jetty have support, but the server working on jvm to keep a large number of socket connections when gc is a very serious problem. This can be achieved by using nginx’s push module to maintain connections and push messages in real time.

These two modules work on nginx to maintain a large number of http connections, and implement the pub/sub protocol to support message sending, the basic process is the following figure, the sender (publisher) pushes the message to the nginx server, and then the push module is responsible for sending the message to the subscriber (client): with the help of this nginx push module, we can save a lot of work, and the application only needs to focus on business logic (that is, what the publisher does), simplifying the application architecture, while the high performance of nginx also has a good performance.

When our product grows to 10 million daily activities, we may have to consider better solutions, such as the WebSocket mentioned above, but this solution is not the mainstream solution for browser compatibility issues. Generally in this case, we have to consider tcp-based socket long connection mode, through some kind of message pushing protocol (xmpp/mqtt/self-defined protocol, etc.) to achieve real-time interaction between client and server side.

Socket.IO is a fully JavaScript implemented, Node.js based, WebSocket enabled protocol for real-time communication, cross-platform open source framework that includes client-side JavaScript and server-side Node.js. It is a library that provides cross-platform real-time communication for real-time applications. socket.io aims to make real-time applications possible on every browser and mobile device, blurring the differences between different transport mechanisms. socket.io gets its name from the fact that it uses the HTML5 WebSocket standard supported and adopted by browsers, since not all browsers support WebSocket, the library supports a number of downgraded features: the

In most contexts, you have the option to maintain a similar long connection to the browser with these features.

IO implements a real-time, bi-directional, event-based communication mechanism, which solves the problem of real-time communication and unifies the way server and client are programmed. After starting Socket, it is like establishing a pipeline between the client and the server, so that both sides can communicate with each other. It also works well with traditional request methods provided by Express.js, i.e., it provides two types of connections on the same domain and port: request/response, websocket (flashsocket, ajax…).