The following information was collected on exactly why the above conclusion occurred.

Unlike Memcached, which supports only simple key-value structured data records, Redis supports a much richer set of data types. The most commonly used data types consist of five main types: String, Hash, List, Set, and Sorted Set. redis internally uses a redisObject object to represent all keys and values. redisObject’s most important information is shown in the figure. 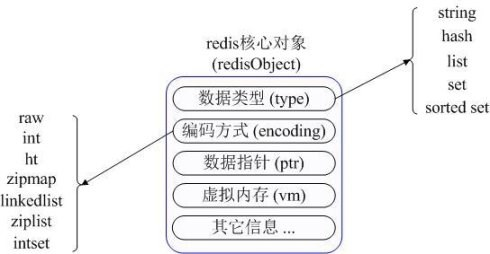 type represents the specific data type of a value object, encoding is a different data type in redis internal storage, for example: type=string represents the value is stored in a common string, then the corresponding encoding can be raw or int, if int is the actual redis The string is stored and represented internally as a numeric class, provided that the string itself can be represented by a numeric value, such as “123″ “456”. The vm field will only be allocated if Redis’ virtual memory feature is turned on, which is off by default. 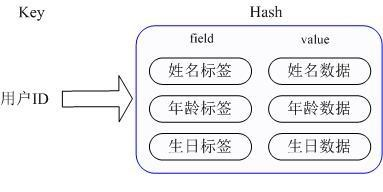 In Redis, not all data is stored in memory all the time. This is one of the biggest differences compared to Memcached. Redis only caches information about all the keys, and if Redis finds that memory usage exceeds a certain threshold, it triggers a swap operation, which is based on “swappability = age*log (size_in_memory)” to figure out which keys need to be swap to disk. The values corresponding to these keys are then persisted to disk and cleared in memory. This feature allows Redis to hold data that exceeds the size of the machine’s own memory. Of course, the machine’s own memory must be able to hold all of the keys; after all, this data is not subject to swap operations. Also, as Redis swaps data from memory to disk, the main thread providing the service and the child thread performing the swap share this memory, so if the data to be swap is updated, Redis will block the operation until the child thread completes the swap. When reading data from Redis, if the value corresponding to the key read is not in memory, then Redis needs to load the corresponding data from the swap file and return it to the requestor. There is a problem with I/O thread pooling here. By default, Redis blocks, i.e., it finishes loading all swap files before corresponding. This strategy is more appropriate when the number of clients is small and batch operations are performed. But if Redis is applied to a large web application, this is clearly not sufficient for large concurrent situations. So Redis runs us to set the size of the I/O thread pool to operate concurrently on read requests that require loading the appropriate data from the swap file, reducing the time spent blocking.

For memory-based database systems like Redis and Memcached, the efficiency of memory management is a key factor in system performance. The malloc/free functions in traditional C are the most commonly used methods to allocate and free memory, but this method has significant drawbacks: first, mismatched malloc and free are prone to memory leaks for developers; second, frequent calls can cause large amounts of memory fragments that cannot be reclaimed and reused, reducing memory utilization; and finally, as a system call, its system Finally, as a system call, its system overhead is much larger than the general function call. Redis and Memcached both use their own designed memory management mechanisms, but there are significant differences in their implementation methods, which are described below.

Memcached uses the Slab Allocation mechanism by default, which is designed to completely solve the memory fragmentation problem by dividing the allocated memory into blocks of a specific length to store key-value data records of a predefined size. This means that all key-value data is stored in the Slab Allocation system, while other memory requests from Memcached are requested through normal malloc/free, as the number and frequency of these requests determine that they do not affect the performance of the whole system. The principle of Slab Allocation is quite simple. As shown in the figure, it first requests a large chunk of memory from the operating system, splits it into chunks of various sizes, and divides the chunks of the same size into groups of Slab Classes, where the chunk is the smallest unit used to store key-value data. The size of each Slab Class can be controlled by setting the Growth Factor when Memcached is started. Assuming the value of Growth Factor is 1.25, if the size of the first group of Chunk is 88 bytes, the size of the second group of Chunk will be 112 bytes, and so on. 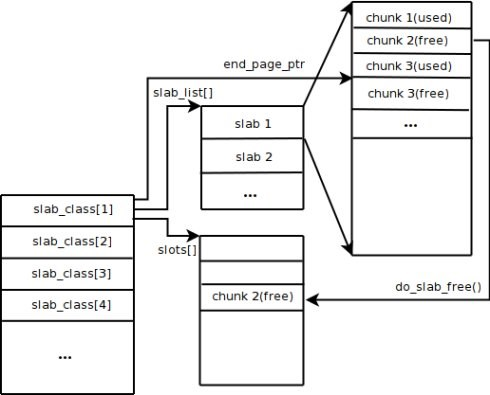 When Memcached receives data from the client, it first selects the most suitable Slab Class according to the size of the received data, and then finds a Chunk that can be used to store data by querying the list of free Chunks in that Slab Class kept by Memcached. When a database expires or is discarded, the Chunk occupied by the record can be reclaimed and added back to the free list. From the above process, we can see that Memcached’s memory management system is efficient and does not cause memory fragmentation, but its biggest drawback is that it leads to wasted space. Because each Chunk is allocated a specific length of memory space, variable length data cannot fully utilize this space. As shown in the figure, caching 100 bytes of data into a 128-byte Chunk results in the remaining 28 bytes being wasted.

Redis keeps track of all memory allocations by defining an array whose length is ZMALLOC_MAX_ALLOC_STAT. Each element of the array represents the number of memory blocks allocated by the current program, and the size of the block is the subscript of that element. In the source code, this array is zmalloc_allocations. zmalloc_allocations[16] represents the number of memory blocks of 16 bytes in length that have been allocated. zmalloc.c has a static variable used_memory to keep track of the total size of memory currently allocated. So, in summary, Redis uses a wrapped mallc/free, which is much simpler than Memcached’s memory management approach.

Although Redis is a memory-based storage system, it supports in-memory data persistence itself and provides two main persistence strategies: RDB snapshots and AOF logging. And memcached does not support data persistence operation.

Redis supports a persistence mechanism that saves a snapshot of the current data as a data file, i.e., an RDB snapshot. Redis relies on the copy on write mechanism of the fork command. When generating a snapshot, the current process forks a child process, then loops through all the data in the child process and writes the data to an RDB file. We can configure the timing of RDB snapshot generation through the Redis save command, for example, we can configure snapshots to be generated in 10 minutes, or we can configure snapshots to be generated when there are 1000 writes, or we can implement multiple rules together. The definition of these rules is in the Redis configuration file, and you can also set the rules at Redis runtime via the Redis CONFIG SET command, without restarting Redis.

Redis’ RDB file does not break because its write operations are performed in a new process. When a new RDB file is generated, the Redis-generated child process first writes the data to a temporary file and then renames the temporary file to an RDB file via the atomic rename system call, so that at any time there is a failure, Redis’ RDB file is always available. The RDB file is also part of the internal implementation of Redis master-slave synchronization, which has the disadvantage that if the database goes down, the data stored in our RDB file is not brand new, and all data from the last RDB file generation to the Redis downtime is lost. This can be tolerated in some businesses.

The full name of the AOF log is append only file, and it is an append-write log file. Unlike a typical database binlog, an AOF file is recognizable as plain text, and its contents are one Redis standard command after another. Only those commands that cause data to be modified are appended to the AOF file. Each command that modifies the data generates a log, and the AOF file grows larger and larger, so Redis provides a feature called AOF rewrite, which regenerates an AOF file so that a single operation is recorded only once in the new AOF file, unlike an old file that may record multiple operations on the same value. The generation process is similar to RDB, which also forks a process, directly traverses the data, and writes a new AOF temporary file. In the process of writing to the new file, all the write operation logs will still be written to the original old AOF file, and also recorded in the memory buffer. When the rename operation is complete, all the logs in the buffer are written to the temporary file at once. The atomic rename command is then called to replace the old AOF file with the new AOF file.

AOF is a write file operation whose purpose is to write the operation log to disk, so it also encounters the same process we described above for write operations. After calling write on an AOF in Redis, the time to call fsync to write it to disk is controlled by the appendfsync option. The following three setting items for appendfsync are progressively stronger in security.

Memcached is an all-memory data caching system. While Redis supports persistence of data, all-memory is, after all, the essence of its high performance. As a memory-based storage system, the size of a machine’s physical memory is the maximum amount of data that the system can hold. If the amount of data to be processed exceeds the physical memory size of a single machine, you need to build a distributed cluster to extend the storage capacity.

Memcached itself does not support distribution, so it can only implement distributed storage for Memcached on the client side through a distributed algorithm like consistent hashing. The following diagram gives the architecture of Memcached’s distributed storage implementation. When a client sends data to the Memcached cluster, it first calculates the target node for that data by the built-in distributed algorithm, and then the data is sent directly to that node for storage. However, when a client queries data, it also calculates the node where the query data is located, and then sends a query request directly to that node to get the data. 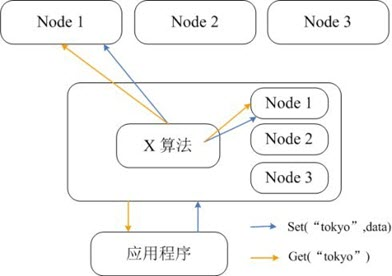 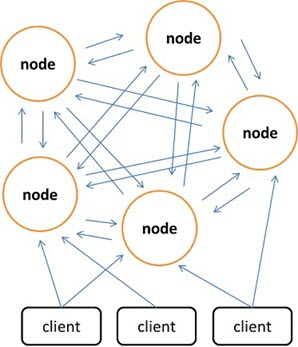