The Requests library is used to make standard HTTP requests in Python. It abstracts the complexity behind the request into a nice, simple API so you can focus on interacting with the service and using the data in your application.

Commonly used parameters are listed in the following table. 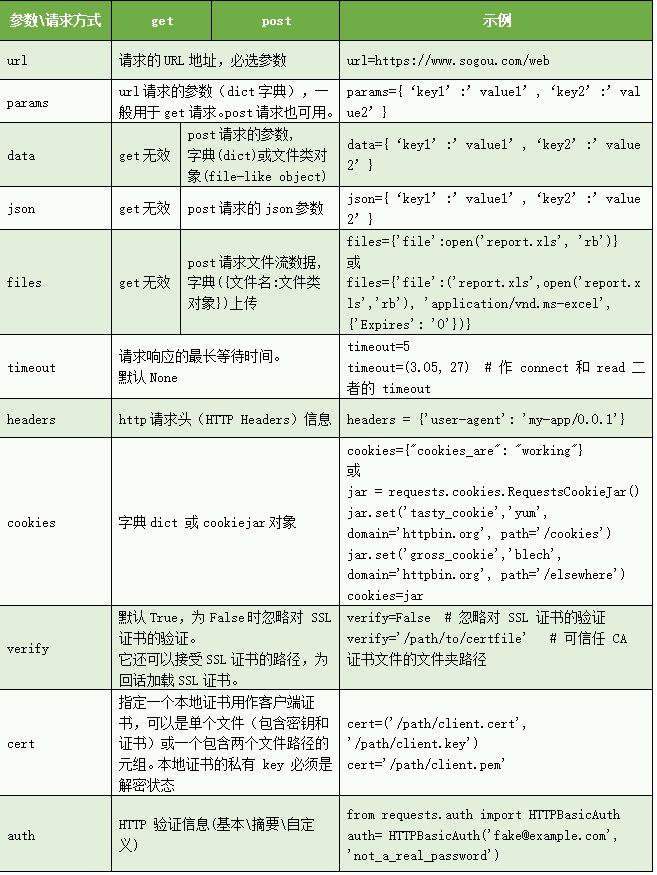 When using requests to capture data, we often encounter connection timeout problems, so in order to make the program more robust, we need to implement a failure retry logic for requests.

A reading of the source code provides an overview of the implementation mechanism.

Retry design is relatively simple, in the HTTPConnectionPool according to the returned exceptions and access methods, distinguish which link failure (connect? read?), and then reduce the corresponding value can be. Then determine whether all the operation retries are zeroed out, and report MaxRetries exception if zeroed out. However, a simple backoff algorithm is used for the interval between each retry.

There are a few points to note when using retry:

When using requests, there are sometimes problems with encoding errors, which are mainly caused by errors in encoding recognition. The most common error that occurs when the content is garbled is the recognition of the encoding as ISO-8859-1.

ISO 8859-1, officially ISO/IEC 8859-1:1998, also known as Latin-1 or “Western European Language”, is the first 8-bit character set of ISO/IEC 8859 within the International Organization for Standardization. It is based on ASCII, with 96 letters and symbols in the vacant 0xA0-0xFF range for use in Latin alphabetic languages with additional symbols.

With the error page, we found that even though the specific encoding of the page was specified in the HTML as follows, the error still occurred.

By looking at the source code, we can find that the default encoding recognition logic of Requests is very simple: as long as the server response header can not get the encoding information that the default use of ISO-8859-1, the specific logic can be obtained from the Lib\site-packages\requests\utils.py. file.

From the code can be seen: requires will first look for the HTTP header “Content-Type” field, if not, the default encoding format is exactly “ISO-8859-1”. The code does not get the encoding format specified in the HTML page, about such processing, many people also submitted in the official issues spit, but the author replied is strictly http protocol standard to write this library. HTTP protocol RFC 2616 mentioned, if the HTTP response in the Content-Type field does not specify the charset, the default page is ‘ISO-8859-1’ encoding.

When you receive a response, Requests makes a guess at the encoding to use for decoding the response when you call the Response.text method. Requests will first check for an encoding in the HTTP header, and if none is present, will use charade to attempt to guess the encoding.

The only time Requests will not do this is if no explicit charset is present in the HTTP headers and the Content-Type header contains text. In this situation, RFC 2616 specifies that the default charset must be ISO-8859-1. Requests follows the specification in this case. If you require a different encoding, you can manually set the Response.encoding property, or use the raw Response.content.

How to solve the problem after finding the cause of the messy code?

If you know the explicit encoding, the solution is very simple, just specify the specific encoding.

Or to recode the data.

How to get the exact page encoding when the exact encoding is not known?

Actually Requests provides to get the encoding from the HTML content, it is just not used by default, see Lib\site-packages\requests\utils.py:

For these three approaches, the rate of identification coding and the resources required differ.

The final solution, creating a requests_patch.py file and importing it before the code is used, solves the problem.

The above code will report TypeError: cannot use a string pattern on a bytes-like object when executed under Python3, mainly because of the non-string data returned by .content in python3. To get the correct encoding under Python, the code is as follows.

When using Python for data scraping, sometimes you need to keep files or images, etc. There are various ways to achieve this in Python.

Use the urlretrieve method to download an image or file