When solving the 5-second timeout problem with CoreDNS, we mentioned using NodeLocal DNSCache to solve the problem, in addition to forcing tcp resolution through dnsConfig. NodeLocal DNSCache improves clusterDNS performance and reliability by running a DaemonSet on the cluster nodes. Pods in ClusterFirst’s DNS mode can connect to kube-dns’s serviceIP for DNS queries. This is converted to a CoreDNS endpoint via iptables rules added by the kube-proxy component. By running DNS caching on each cluster node, NodeLocal DNSCache reduces the latency of DNS lookups, makes DNS lookup times more consistent, and reduces the number of DNS queries sent to kube-dns.

There are several benefits to running NodeLocal DNSCache in a cluster. 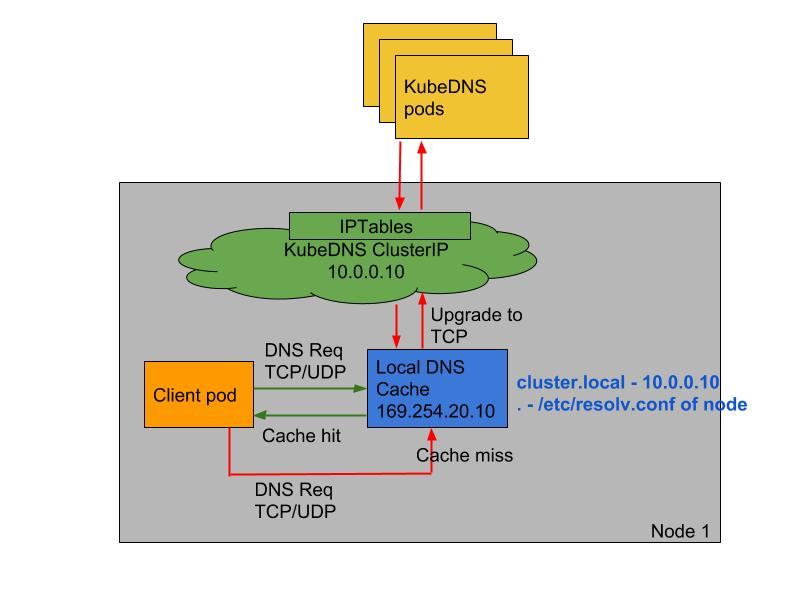 To install NodeLocal DNSCache is also very simple, just get the official list of resources directly from

This resource manifest file contains several variables, among them.

There are also two parameters __PILLAR__CLUSTER__DNS__ and __PILLAR__UPSTREAM__SERVERS__, which are configured by mirroring 1.15.6 and above, and the corresponding values come from kube-dns ConfigMap and the custom Upstream Server configuration. The installation is done directly by executing the command shown below.

You can check if the corresponding Pod has started successfully by using the following command.

Note that node-local-dns is deployed with DaemonSet using hostNetwork=true, which will take up port 8080 of the host, so you need to make sure that port is not taken.

If the kube-proxy component is using ipvs mode, we need to modify the -cluster-dns parameter of the kubelet to point to 169.254.20.10, Daemonset will create a NIC in each node to tie this IP, and the Pod will send a The Pod will send DNS requests to this IP, and only when the cache does not hit will it proxy to the upstream cluster DNS for queries. In iptables mode, Pod still requests to the original cluster DNS, and the node has this IP listening, which will be intercepted by the local machine and then request the upstream cluster DNS, so there is no need to change the --cluster-dns parameter.

However, it should be noted that the above approach is not recommended for online environments, as it will give priority to modifying the cluster-dns parameter of the kubelet and then installing NodeLocal, which after all has a vacuum period in which we can manually go node by node to verify.

After the node-local-dns installation and configuration is complete, we can deploy a new Pod to verify: (test-node-local-dns.yaml)

We can see that nameserver has become 169.254.20.10. Of course, if you want to use node-local-dns for the previous history of Pod, you need to rebuild it.