Agrona is a Java toolkit developed by real-logic that provides a number of high-performance data structures and tooling methods, mainly including.

Duty Cycle is a programming model, it is a dead loop program, in the loop, to execute a certain logic, and according to the result of the execution to decide whether to wait a while for the next cycle. For example.

In Agrona, Agents are defined.

doWork(), which is used to handle the business logic, returns a value that determines whether to execute the idle policy in Agrona.

In addition, onStart() and onClose() serve as callback hook methods when the Agent is started and closed, and roleName() asserts the name of the Agent.

If you need to customize the idle strategy, you only need to implement the IdleStrategy interface.

The idle policy above does not necessarily guarantee thread safety, so it is recommended that each Agent use a separate idle policy.

The Agent Runner is responsible for combining and running the Agent and Idle Strategies.

Above is the constructor of AgentRunner, where

After getting the AgentRunner object, Agrona provides the following three ways to actually start it.

If we want to control the Agent manually, Agrona provides the AgentInvoker.

You can see that the constructor method removes the idle policy compared to AgentRunner, because it is the Agent that needs to be executed manually, so this parameter is not needed.

Agrone provides its own Clock API, first of all it is based on Epoch Time, which is the time difference since 1970-1-1 00:00:00.000 until now. The top-level interface is EpochClock and there are two implementations: SystemEpochClock and CachedEpochClock.

For SystemEpochClock, the millisecond time difference is returned, which is actually a wrapper around System.currentTimeMillis(), providing a static instance for the operation.

For CachedEpochClock, which is actually a cache, there are several methods.

The author of Aeron developed disruptor during his tenure at LMAX. In Agrona, the authors also provide support for this data structure.

For single-producer-single-consumer scenarios, unlike the RingBuffer in Disruptor, an additional RingBufferDescriptor.TRAILER_LENGTH is required to define the RingBuffer size, and the ByteBuffer API determines whether the buffer is allocated inside or outside the heap.

The following code shows the creation of a OneToOneRingBuffer of size 4096, using an off-heap allocation buffer.

When consuming data, you need to implement the MessageHandler interface, e.g.

Where the msgType field is the identifier of the message and will be stored in the message header. If this field is not used, it must be set to a value greater than 0.

When producing data, the RingBuffer’s write method needs to be called, e.g.

sentOk indicates whether the write was successful or not, and this can be used to perform a backpressure operation to prevent consumers from consuming it. ringBuffer provides the following two methods to show the current production and consumption.

The difference is that the onMessage() method returns the `ControlledMessageHandler:

When writing data, you can also use the tryClaim() method to manipulate the underlying RingBuffer data structure directly.

First, call tryClaim() to get the index that can be written, then get the underlying data structure of the RingBuffer, write data to it, and finally, call commit or abort to finish.

The API is consistent with OneToOneRingBuffer and supports multi-producer scenarios.

Note in particular that under Broadcast, messages are discarded if the sender is producing faster than the consumer can consume (no backpressure support).

Agrona provides a number of collection data structures for solving the overhead of needing to box and unbox the base data type in a collection.

When using the IDE for DEUBG, Agrona HashMaps may have problems with the wrong elements in it. To solve this you can set shouldAvoidAllocation in the constructor to false and Agrona will turn off caching, but this will also result in an increase in GCs.

When using these HashMaps, you need to make sure that the element hashCode() is correct, and the performance of the collection can be greatly affected if hashCodes are heavily conflicted.

Agrona’s use of the sun.misc.Unsafe and sun.nio.ch.SelectedImpl.selectedKeys APIs may cause the JVM to have a warning log printed at startup about illegal reflection accesses. If you want to remove the selections, add the JVM parameters: --add-opens java.base/sun.nio.ch=ALL-UNNAMED --add-opens jdk.unsupported/sun.misc=ALL-UNNAMED

Agrona defines the DirectBuffer interface for interacting with Aeron, which is somewhat similar to Java NIO ByteBuffer, but a bit more convenient. 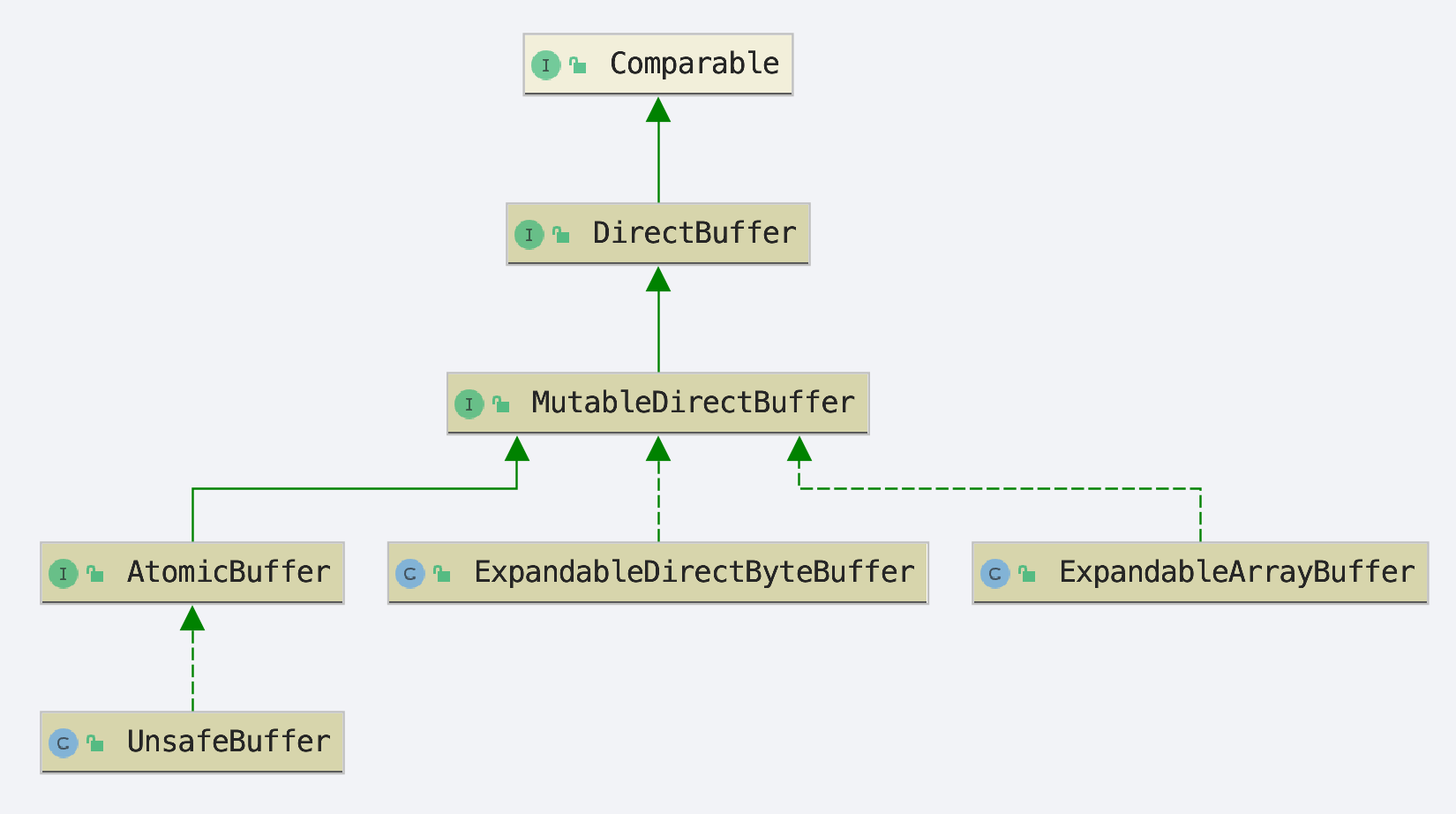 Agrona uses the byte order of ByteOrder.nativeOrder() by default, and using different byte orders for reading and writing can lead to incorrect results. This can occur in cross-OS and cross-platform interactions.

The following figure shows a buffer of size 13 bytes, if we want to extract 4 bytes from it for the highlighted part, we need to set offset to 4 and then set read length to 4.

DirectBuffer provides support for reading and writing short, int, and long data. For int and long, additional utility methods are provided for compare-and-set, get-and-add, and get-and-set.

It is generally not recommended to use float and double for data transfer, but either BigDecimal formatted as a string or scaled long.

DirectBuffer provides methods for reading and writing float and double.

When initializing the snowflake algorithm, you need to provide a unique node ID, which supports up to 1024 nodes by default.

Note that by default it uses 1970 as the starting point, so it can only generate up to 2039 (similar to Epoch Time). It provides an overloaded constructor to specify the starting time.