When we work with relational databases, the primary key is a concept that cannot be avoided. The primary key acts as an identifier for a record, and we can locate a unique record in a table by its identifier.

The default AUTO_INCREMENT attribute in MySQL ensures primary key continuity in most cases. We can see the current value of the AUTO_INCREMENT attribute in the table definition with the show create table command, and when we insert data into the current table, it will use the value of this attribute as the primary key of the inserted record, and it will be added by one each time we get the value.

In the perception of many developers, MySQL’s primary keys are supposed to be monotonically increasing, but we encounter two problems in our dealings with MySQL. First, the primary keys of records are not consecutive, and second, multiple records with the same primary key may be created, and we will answer the reasons why MySQL is not monotonic and consecutive from the following two perspectives.

Note that we are discussing the most common InnoDB storage engine in MySQL in this article. The implementation principle of AUTO_INCREMENT provided by other engines such as MyISAM is out of the scope of this article.

The AUTO_INCREMENT attribute is common in MySQL, but in earlier versions of MySQL, its implementation was relatively rudimentary. The InnoDB engine stores an integer in memory indicating the next ID to be assigned, and when the client inserts data into the table it gets the AUTO_INCREMENT value and adds one to it. 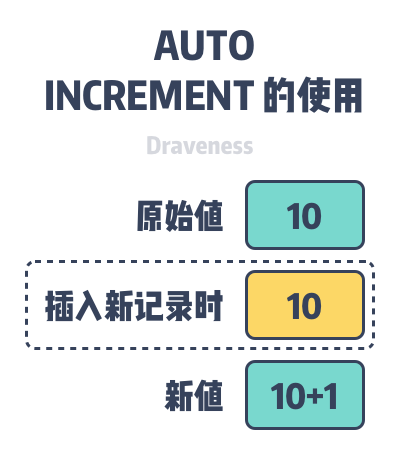 Because this value is stored in memory, the first time a client inserts a record into the table_name table after each MySQL instance restart, MySQL uses the SQL statement shown below to find the maximum value of id in the current table, add it by one as the primary key for the record to be inserted, and use it as the initial value for the AUTO_INCREMENT counter in the current table.

If the author had been asked to implement AUTO_INCREMENT, this approach would have been used in the beginning as well. However, although this implementation is very simple, if the user does not strictly follow the relational database design specifications, the data inconsistency problem will occur as shown below. 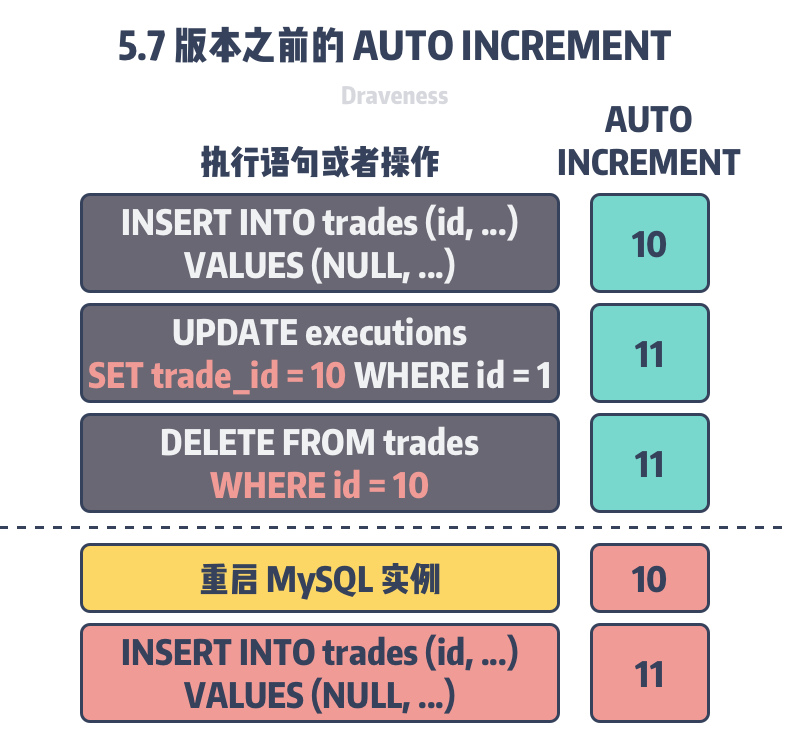 Because the MySQL instance is restarted, the AUTO_INCREMENT counter in memory is reset to the maximum value in the table, and when we insert a new trades record into the table, we reuse 10 as the primary key, and the primary key is not monotonic anymore. After the new trades record is inserted, the record in the executions table incorrectly references the new trades, which is actually a rather serious error.

However, this is not entirely a MySQL problem. If we strictly follow the relational database design specifications and use foreign keys to handle links between different tables, we can avoid the above problem, because the current trades record still has an external reference, so the foreign key will prohibit the deletion of the trades record, but most internal DBAs do not recommend or prohibit the use of foreign keys, so there is a real possibility of this problem.

However, in MySQL 8.0, the initialization behavior of the AUTO_INCREMENT counter has changed so that each change in the counter is written to the system redo log and stored in the engine’s private system table at each checkpoint

When the MySQL service is restarted or in crash recovery, it can recover the latest AUTO_INCREMENT counters from persistent checkpoints and redo logs, avoiding unmonotonic primary keys also solving the problem mentioned here. 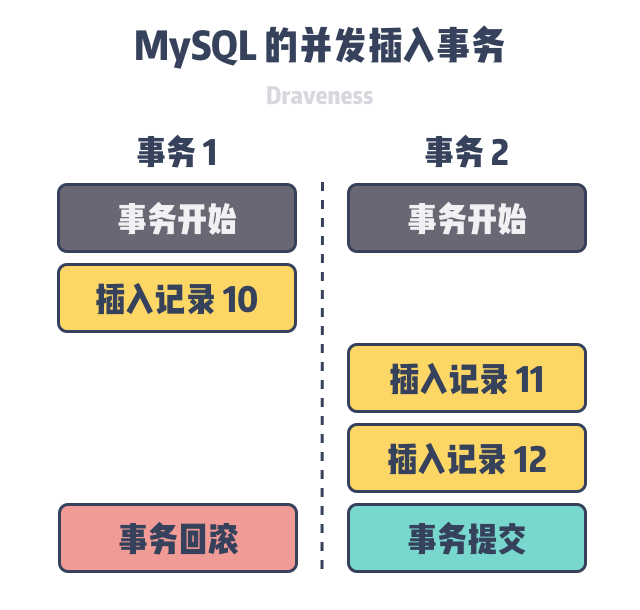 However, if at the end Transaction 1 rolls back due to a unique key conflict in the inserted record, and Transaction 2 commits normally without error, we will find that the primary key in the current table is disjoint, and subsequent new inserts will no longer use 10 as the primary key of the record. 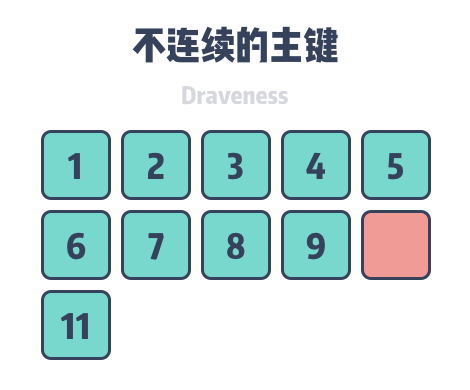 The above behavior is controlled by the innodb_autoinc_lock_mode configuration provided by the InnoDB storage engine, which determines the lock that needs to be obtained first when acquiring the AUTO_INCREMENT timer, and which exists in three different modes, Traditional, Consecutive, and Interleaved, with MySQL using Consecutive as the default lock mode.

The ultimate solution to this problem is to serialize all transactions containing insert operations, that is, to use the highest isolation level of the database - Serialiable. Of course, directly modifying the isolation level of the database is relatively simple and brutal, and implementing fully serialized inserts based on MySQL or other storage systems can also ensure that the primary key ** is consecutive at the time of insertion**, but it still does not avoid the discontinuity caused by deleting data.

Early MySQL’s primary keys were neither monotonic nor continuous, these were some of the engineering choices made at the time, and the original design of MySQL had a low probability of causing problems if the relational database design specifications were strictly followed, and only when the deleted primary key was referenced by an external system would it affect data consistency, but the differences in how it is used today increase the error MySQL has also made AUTO_INCREMENT persistent in 8.0 to avoid this problem.

Discontinuous primary keys in MySQL are another example of engineering to performance, sacrificing primary key continuity to support concurrent insertion of data, ultimately increasing the throughput of MySQL services. It is a very interesting process to re-understand the design decisions behind this problem today. Let’s briefly summarize this article here and get back to the question of the day - why MySQL’s self-incrementing primary keys are not monotonic or sequential.

To conclude, let’s look at some more open-ended related questions, and interested readers can think carefully about the following.