The memory of an application is generally divided into heap and stack areas, and the program can actively request memory space from the heap area during runtime.

This memory is allocated by the memory allocator and reclaimed by the garbage collector. We have analyzed the process of requesting and releasing heap memory in detail in the last two sections, and this section will introduce the management of Go language stack memory.

The memory in the stack area is generally allocated and released automatically by the compiler, which stores the function entry parameters and local variables. These parameters are created with the creation of the function and die out when the function returns, and generally do not exist in the program for a long time. This linear memory allocation strategy has a very high efficiency, but the engineer also often has no control over the allocation of the stack memory, and this part of the work is basically done by the compiler.

Registers are a scarce resource in the central processing unit (CPU). They have very limited storage capacity, but provide the fastest read and write speeds, and taking full advantage of register speed can build high-performance applications. Registers are very limited on physical machines, yet operations in the stack area will use more than two registers, which is a good indication of the importance of the presence of applications within the stack.

For historical reasons, stack memory is expanded from high addresses to low addresses, and applications only need to modify the SP register value when requesting or releasing stack memory.

If we execute the pthread_create system call in the Linux OS, the process starts a new thread and if the user does not specify the size of the thread stack through the soft resource limit RLIMIT_STACK, the OS chooses a different default stack size depending on the architecture.

Most architectures have a default stack size of about 2-4 MB, and very few architectures use a 32 MB stack on which user programs can store function parameters and local variables. However, this fixed stack size is not the right value in some scenarios. If the program needs to run hundreds or even thousands of threads at the same time, most of these threads will only use a small amount of stack space, and when the function call stack is very deep, the fixed stack size will not meet the needs of the user program.

Threads and processes are both contexts for code execution, but if an application contains hundreds or thousands of execution contexts and each context is a thread, it can take up a lot of memory space and incur other additional overhead.

In programming languages such as C and C++, which require manual memory management, the allocation of objects or structures to the stack or heap is at the discretion of the engineer, and this poses a challenge for the engineer’s work. If the engineer can accurately allocate a reasonable amount of space to each variable, then the overall program must run most efficiently and use memory efficiently, but manually allocating memory leads to two problems as follows.

Compared to hanging pointers, wasting memory space is a minor problem. In C, it is a common error for a variable on the stack to be returned to the caller as the return value of a function. In the code shown below, the variable i on the stack is incorrectly returned.

When the dangling_pointer function returns, its local variable is reclaimed by the compiler and the caller gets a dangerously hanging pointer, a problem that is more difficult to detect and locate in large projects when we are not sure if the value the current pointer is pointing to is legal.

When we violate the first invariant, the green pointer on the heap points to the yellow memory on the stack. Once the function returns, the function stack will be recycled and the value pointed to by the green pointer is no longer legal; if we violate the second invariant, the memory pointed to by the yellow pointer is no longer legal because the memory under the register SP has been freed due to the function return.

Deciding whether a variable is on the stack or the heap, although important, is a relatively well-defined problem, and we can make decisions uniformly through the compiler. To ensure absolute memory safety, the compiler may incorrectly assign some variables to the heap, but because the heap is also scanned by the garbage collector, it does not cause memory leaks and safety issues such as hanging pointers, freeing up the engineer’s productivity.

The Go language uses the user-state thread Goroutine as the execution context, which has much less additional overhead and default stack size than threads, however the stack memory space and stack structure of Goroutine has also undergone some changes in earlier versions.

The initial stack memory of Goroutine was modified several times in the first few versions, and the increase from 4KB to 8KB was a temporary solution to mitigate the performance impact of stack splitting in segmented stacks; after the introduction of continuous stacks in v1.3, the initial stack size of Goroutine was reduced to 2KB, further reducing the amount of memory occupied by Goroutine. memory space.

The segmented stack is a pre v1.3 implementation of the Go language, where all Goroutines are initialized by calling `runtime.stackalloc:go1.2 to allocate a fixed size block of memory, denoted by runtime.StackMin:go1.2, which is 8KB in v1.2.

If the memory requested by this method is a fixed 8KB in size or if other conditions are met, the runtime will find a free block of memory in the global stack cache chain and return it as the stack space for the new Goroutine; in the rest of the cases, the stack memory space will request a suitable block of memory from the heap.

Once the stack space requested by a Goroutine is no longer needed, the runtime calls runtime.lessstack:go1.2 and runtime.oldstack:go1.2 to free up the memory space that is no longer in use.

While the segmented stack mechanism can allocate memory for the current Goroutine on demand and reduce the memory footprint in a timely manner, it also has two major problems.

The core principle is that whenever a program runs out of stack space, a larger stack is initialized and all the values in the original stack are migrated to the new stack, so that new local variables or function calls have sufficient memory space. When using the continuous stack mechanism, the expansion due to lack of stack space goes through the following steps.

Because of the need to copy variables and adjust pointers, the contiguous stack adds additional overhead to the stack expansion, but the performance problems caused by hot splits can be avoided by a reasonable stack shrinkage mechanism. If the Goroutine uses a quarter of the stack memory during GC, it will be reduced by half, so that it will only be expanded once when the stack memory is almost full and will not be expanded and shrunk as often as function calls.

The execution stack in Go is represented by runtime.stack, which contains only two fields, representing the top of the stack and the bottom of the stack, each representing a memory space in the range [lo, hi).

The structure of the stack is very simple, but to understand how the Goroutine stack is implemented, we need to start with two phases, during compilation and at runtime.

Note that the Go compiler does not insert runtime.morestack for all functions, it only inserts instructions when necessary to reduce additional runtime overhead. The compiler instruction nosplit can skip the stack overflow check, which reduces some of the overhead, but there is also a risk of overflow with a fixed size stack. This section analyzes the initialization of the stack, the allocation of the stack when the Goroutine is created, the expansion of the stack by the compiler and the runtime, and the shrinking process when the stack space is underutilized.

From the experience of scheduler and memory allocation, if only global variables are used to allocate memory at runtime, it will inevitably cause lock competition between threads and thus affect the execution efficiency of the program. stack memory is more closely related to threads, so we add a stack cache to each thread cache runtime.mcache to reduce the impact of lock competition.

The runtime.stackalloc is called in the Goroutine’s initialization function runtime.malg to allocate a stack memory space of sufficient size. Depending on the size of the thread cache and the requested stack, the function allocates the stack space in three different ways.

We will describe here the runtime allocation of stack space in two parts according to the size of the stack. On Linux, _FixedStack = 2048, _NumStackOrders = 4, _StackCacheSize = 32768, i.e. if the requested stack space is less than 32KB, we initialize the memory in the global stack cache pool or in the thread’s stack cache at.

If the Goroutine requests too much memory space, the runtime will see if there is any space left in runtime.stackLarge, and if there is no space left, it will also request new memory from the heap.

Note that because OpenBSD 6.4+ has special requirements for stack memory, we need to call runtime.osStackAlloc to do some extra processing whenever we request stack memory from the heap, however, other operating systems do not have this limitation.

The compiler inserts a runtime.morestack runtime check for function calls in cmd/internal/obj/x86.stacksplit, which will check if the current Goroutine stack memory is sufficient before almost all function calls, and if the current stack needs to be expanded, we will save some information about the stack and call runtime.newstack to create a new stack.

If the current Goroutine does not need to be preempted, meaning we need new stack space to support function calls and the initialization of local variables, the runtime will first check if the target size stack will overflow.

If the size of the target stack does not exceed the program’s limits, we switch the Goroutine to the _Gcopystack state and call runtime.copystack to start the stack copy. Before copying the stack memory, the runtime will allocate new stack space via runtime.stackalloc.

The initialization of the new stack and the copying of the data is a relatively simple process, but this is not the most complicated part of the whole process. We also need to point the memory in the source stack to the new stack, during which we need to adjust the following pointers separately.

Adjusting pointers to stack memory calls runtime.adjustpointer, which adjusts the pointers using the memory address difference between the new stack and the old stack calculated by runtime.adjustinfo. Once all the pointers have been adjusted, we can update several variables in Goroutine and free the original stack memory space with runtime.stackfree.

runtime.shrinkstack The function called when the stack is shrunk, the principle of this function is very simple, most of which is the code to check whether the preconditions for shrinkage are met, the core logic is only the following lines.

If a stack reduction is to be triggered, the new stack will be half the size of the original stack, although the reduction process will stop if the new stack size is below the program’s minimum limit of 2KB. 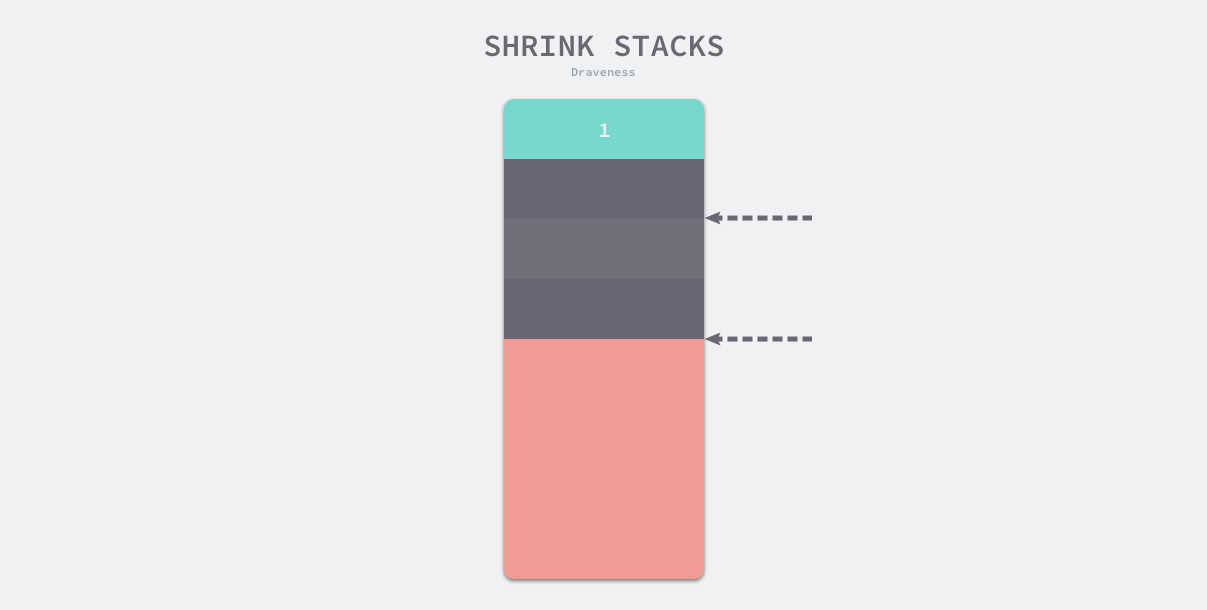 The runtime will only shrink the stack when it is under 1/4 of its memory usage, and the shrink will also call the runtime.copystack used in the expansion to open up new stack space.

Stack memory is an important memory space in an application that can support local variables and function calls. Variables in the stack space are created and destroyed along with the stack, and this part of the memory space does not require much intervention and management by engineers. Modern programming languages reduce our workload through escape analysis, and understanding the allocation of the stack space is a great help in understanding the runtime of the Go language.