I want to Javassist as the core JDBC-based Javassist in my free time to write a set of lightweight ORM framework to abandon reflection calls, the process of reading mybatis, tk-mapper, mybatis-plus and spring-boot-starter-jdbc source code. Among them, I found that the LambdaQueryWrapper in mybatis-plus can get the method information (actually CallSite information) of the currently called Lambda expression, so here is a complete record. This article is based on JDK11, other versions of JDK may not be suitable.

When I was looking at the source code implementation of Lambda expressions, I didn’t look at the comments of LambdaMetafactory, and one of the many comments at the top of this class is as follows.

Search for FLAG_SERIALIZABLE again in the comments of LambdaMetafactory and you can see this comment.

To wit: the function object instances generated after setting the FLAG_SERIALIZABLE flag will implement the Serializable interface, and a method with the name writeReplace will exist with a return value of type SerializedLambda. the methods that call these function objects (the previously mentioned “capture class”) of the caller must exist for a method with the name $deserializeLambda$, as described by the SerializedLambda class.

Finally, looking at the description of SerializedLambda, the annotation has four major paragraphs, which are posted here and extract the core information per small paragraph. 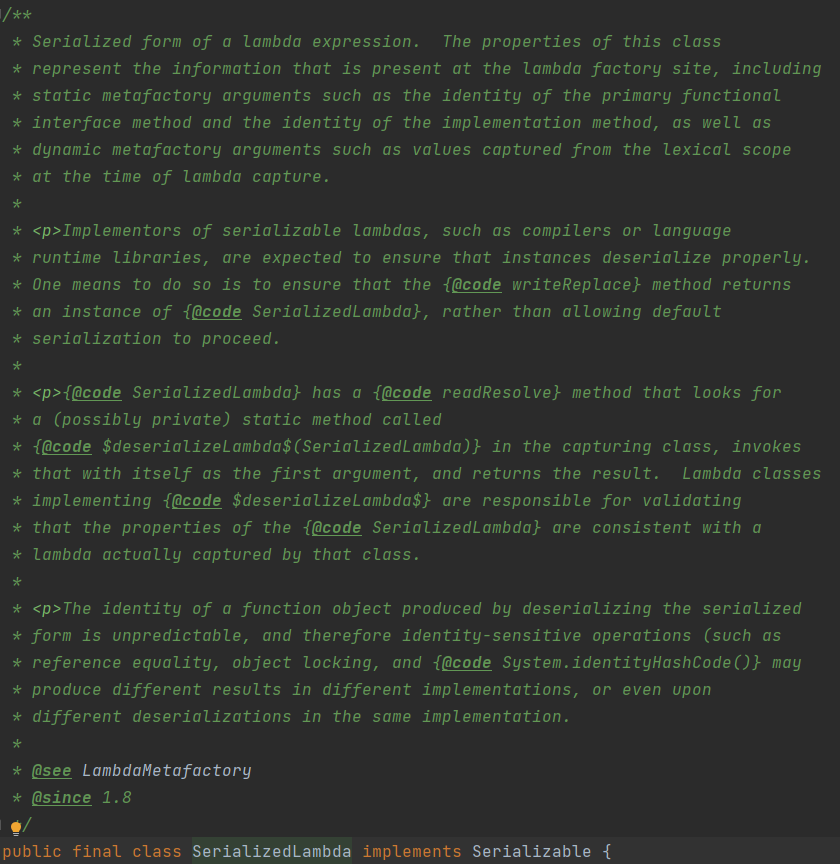 The general idea of each paragraph is as follows.

As a practical example, define a functional interface that implements Serializable and call it.

The executed DEBUG message is as follows. 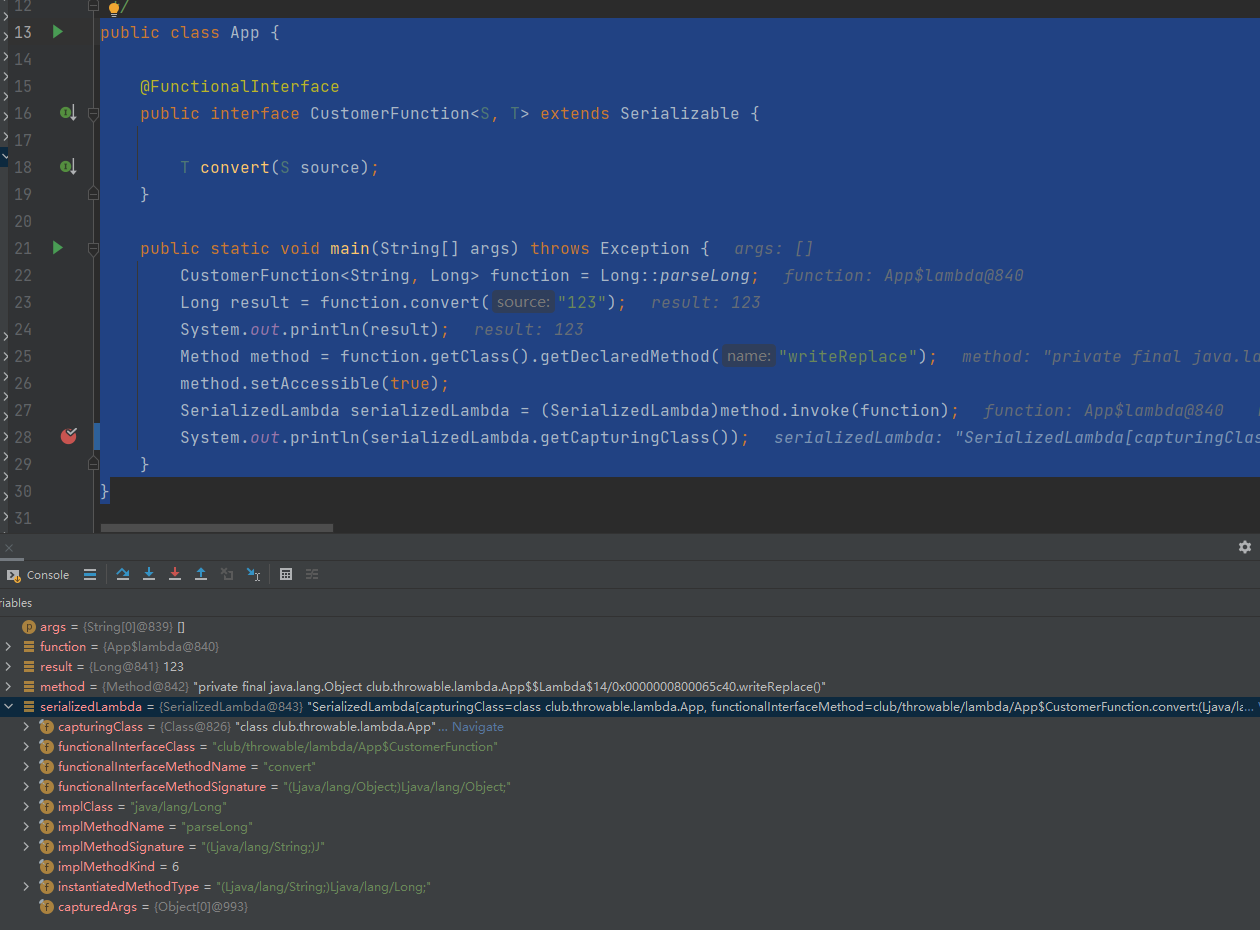 This gives access to the call point runtime information of the functional interface instance when the method is called, and even the type of the generic parameter before it is erased, then many tricks can be derived. For example

Having spent a lot of time showing the functionality and use of SerializedLambda, let’s look at serialization and deserialization of Lambda expressions.

The results are shown in the following figure. 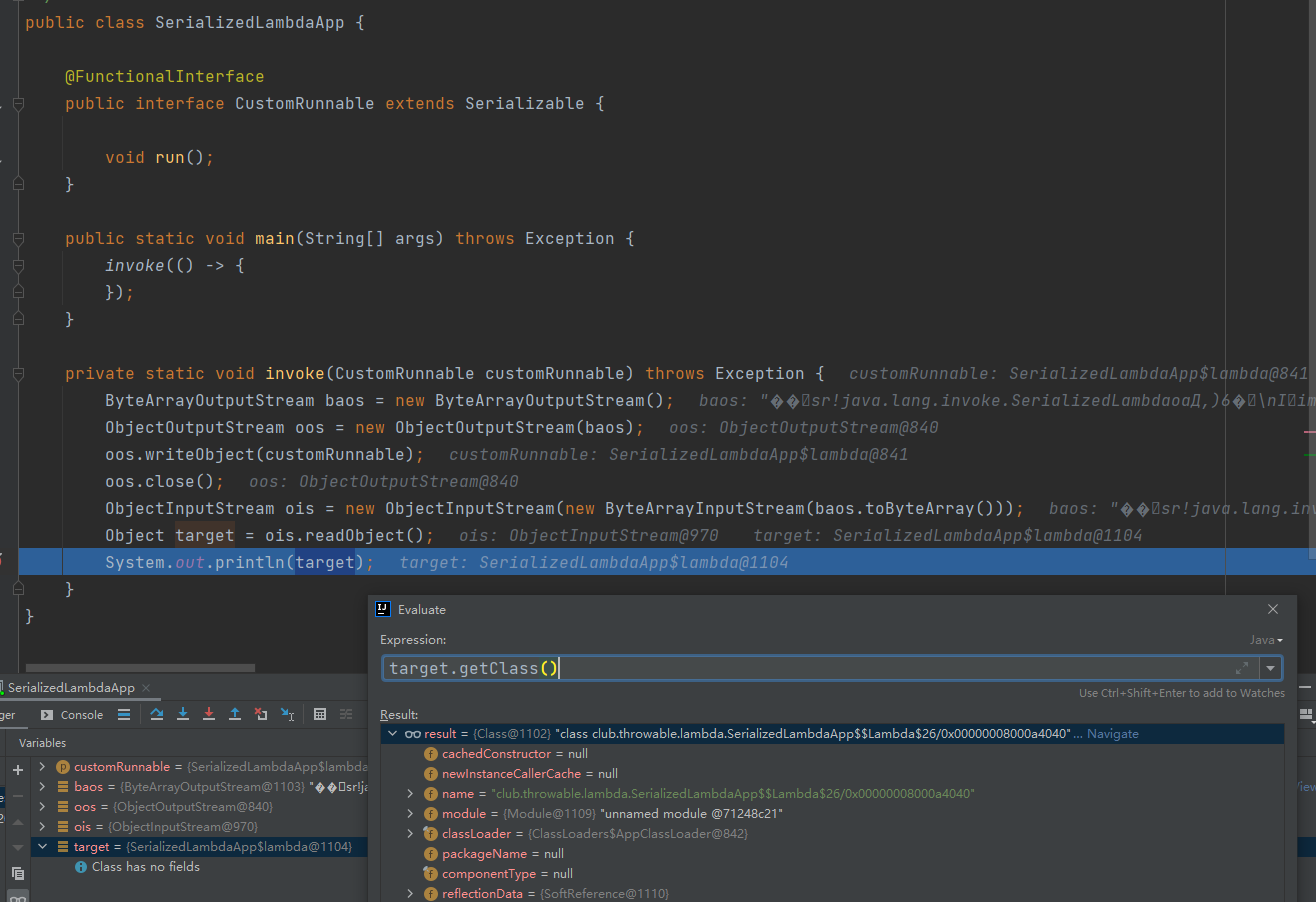 Regarding the principle of Lambda expression serialization, you can directly refer to the source code of ObjectStreamClass, ObjectOutputStream and ObjectInputStream, and here is the direct conclusion.

The graphical process is as follows.

From the previous analysis, it is known that there are two ways to obtain a SerializedLambda instance of a Lambda expression.

Based on these two ways you can write separate examples, for example the reflection way as follows.

The serialized and deserialized approach is slightly more complicated because the ObjectInputStream.readObject() method will end up calling back the SerializedLambda.readResolve() method, resulting in the return of a new template class hosting an instance of the Lambda expression, so here we need to find a way to interrupt this The solution is to construct a shadow type similar to SerializedLambda but without the readResolve() method.

As mentioned earlier, the deserialization of a Lambda expression instance calls the java.lang.invoke.SerializedLambda.readResolve() method, which, magically, has the following source code.

You can try to retrieve the list of methods in the “capture class”.

SerializedLambda annotation description is consistent with the previously mentioned java.lang.invoke. I guess $deserializeLambda$ is a method generated by the VM and can only be called by reflection, so it is a deeper hidden trick.

The Lambda expression feature in the JDK has been released for many years, and I can’t imagine that it took so many years to figure out its serialization and deserialization methods today. Although this is not a complex problem, it is one of the more interesting points of knowledge that I have seen in recent times.