Regarding the application system user identity management requirements, including authentication, permission authorization, single sign-on, federated authentication and other business scenarios, there are a bunch of standards and specifications in the industry, such as CAS and Kerberos for single sign-on, OpenID for third-party authentication, OAuth for third-party user authorization, SAML for federated authentication and authorization data standards, and so on. Each technology has its own application scenarios and there are also crossover scenarios. To figure them out, you need to understand the working principles and application scenarios of various technologies. Today, starting with one of these technologies, a brief introduction to OAuth2.0 user authorization framework, want a comprehensive understanding of the framework can refer to the framework’s standard RFC6749.

Using the OAuth framework, the following authorization process is used to grant the P service limited permission to operate the S service without exposing the user password, and the overall process is as follows.

OAuth has developed to date, there are three versions, respectively: the initialization version OAuth1.0; vulnerability repair version OAuth 1.0a; not backward-compatible OAuth2.0 version. 2.0 version is mainly to repair the security vulnerabilities of the previous version, the authorization process has been optimized to provide a richer use of the scenario, because the optimization of the streamlined steps of authorization, so can not Backward compatible.

The core concepts of OAuth 2.0

According to the RFC description, OAuth 2.0 defines four service roles, which are described as follows.

Some of the concepts involved in the process of authentication and authorization.

Access tokens come with an expiration time to control authorization in the time dimension, while in the scope dimension, OAuth introduces the concept of scope. scope can be seen as an object containing the ID, name, and description of a permission, such as “Get your basic information (avatar, nickname) “. The scope must be requested from the third-party login service provider when accessing the account service, and the parameter must be specified when requesting authorization (otherwise it indicates that all permissions allowed by the application are obtained), and these permissions must be shown to the user without reservation when the user confirms the authorization, so that the user knows which data or services the app needs to obtain from the user.

The OAuth 2.0 flowchart in the official RFC 6749 document is a bit obscure and has been optimized as follows 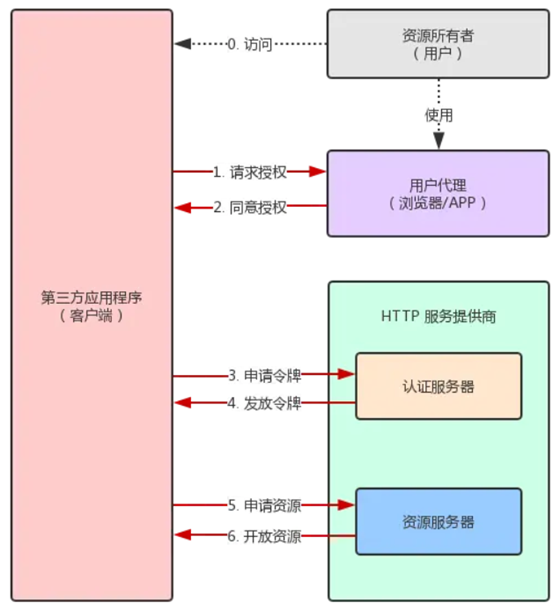 The four modes of OAuth2.0

The entire authorization process is described as follows.

Example of a successful response.

The request parameters are described as follows

The success response parameters are described as follows

The final access token responds in JSON format and requires that the response headers Cache-Control: no-store and Pragma: no-cache be specified.

Example of a successful response.

In order to prevent the client from using a token for an unlimited number of times, the token will generally have an expiration time limit, when it is about to expire, you need to reacquire the token, and if you go through the authorization process of the authorization code again, it is very bad for the user experience, so OAuth 2.0 allows users to automatically renew the token.

The specific method is, when the B site issues a token, two tokens are issued at once, one for getting data and the other for getting a new token (refresh token field). Before the token expires, the user uses the refresh token to send a request to renew the token.

In the URL above.

After the B site is verified, a new token will be issued.

Note: The third-party application server gets the refresh token and must store it on the server and reacquire the new token through the background to protect the confidentiality of the refresh token.

Some web applications are purely front-end applications, with no back-end. RFC 6749 specifies a second way, allowing tokens to be issued directly to the front end. This approach does not have an authorization code as an intermediate step, so it is called (authorization code) “hidden” (implicit).

The following are the parameters needed for these steps above.

A step, the HTTP request from the client, contains the following parameters.

C step, the authentication server responds to the client’s URI with the following parameters.

In the above example, the authentication server uses the Location field of the HTTP header message to specify the URL of the browser redirect. Note that the Hash portion of this URL contains the token.

According to step D above, the browser will next access the URL specified by Location, but the Hash part will not be sent. The next step E, the code sent from the service provider’s resource server, will extract the token in the Hash.

RFC 6749 also allows users to give their user name and password directly to an application if you have a high level of trust in that application. This is usually used when the user has a high degree of trust in the client, such as when the client is part of an operating system or produced by a reputable company. The authentication server, on the other hand, should only consider using this mode if other authorization modes cannot be enforced. The application then uses your password to request a token, in a way called “password”.

In step B, the client sends an HTTP request containing the following parameters.

In step C, the authentication server sends an access token to the client, an example of which is shown below.

The client shall not save the user’s password during the whole process.

The last approach is credential-based (client credentials) for command-line applications that do not have a front-end, i.e., requesting a token at the command line.

When a client requests access to a protected resource under its control, the client can only use its client credentials (or other supported authentication method) to request an access token. Or other resource owners previously arranged with the authorization server (whose methods are outside the scope of this document). The client credential grant type must be used by confidential clients only.

In step A, the client sends an HTTP request with the following parameters.

The authentication server must, in some way, verify the identity of the client.

In step B, the authentication server sends an access token to the client.