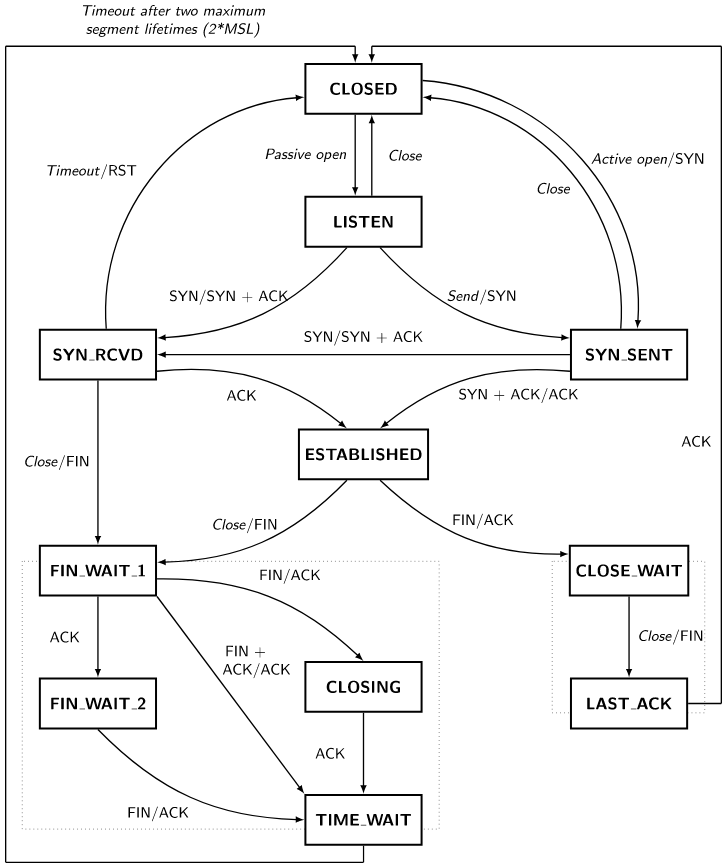 From the above, we can see that TIME_WAIT appears only on the actively disconnected side, while the passively disconnected side goes directly to the CLOSED state, and the client that enters TIME_WAIT needs to wait for 2 MSL before it can actually close the connection. The reason why the TCP protocol requires the TIME_WAIT state is the same as the reason why a client needs to wait for two MSLs before it can directly enter the CLOSED state.

Both of the above reasons are relatively simple, so let’s expand on some of the possible problems behind them.

To be sure that a TCP does not create a segment that carries a sequence number which may be duplicated by an old segment remaining in the network, the TCP must keep quiet for a maximum segment lifetime (MSL) before assigning any sequence numbers upon starting up or recovering from a crash in which memory of sequence numbers in use was lost. 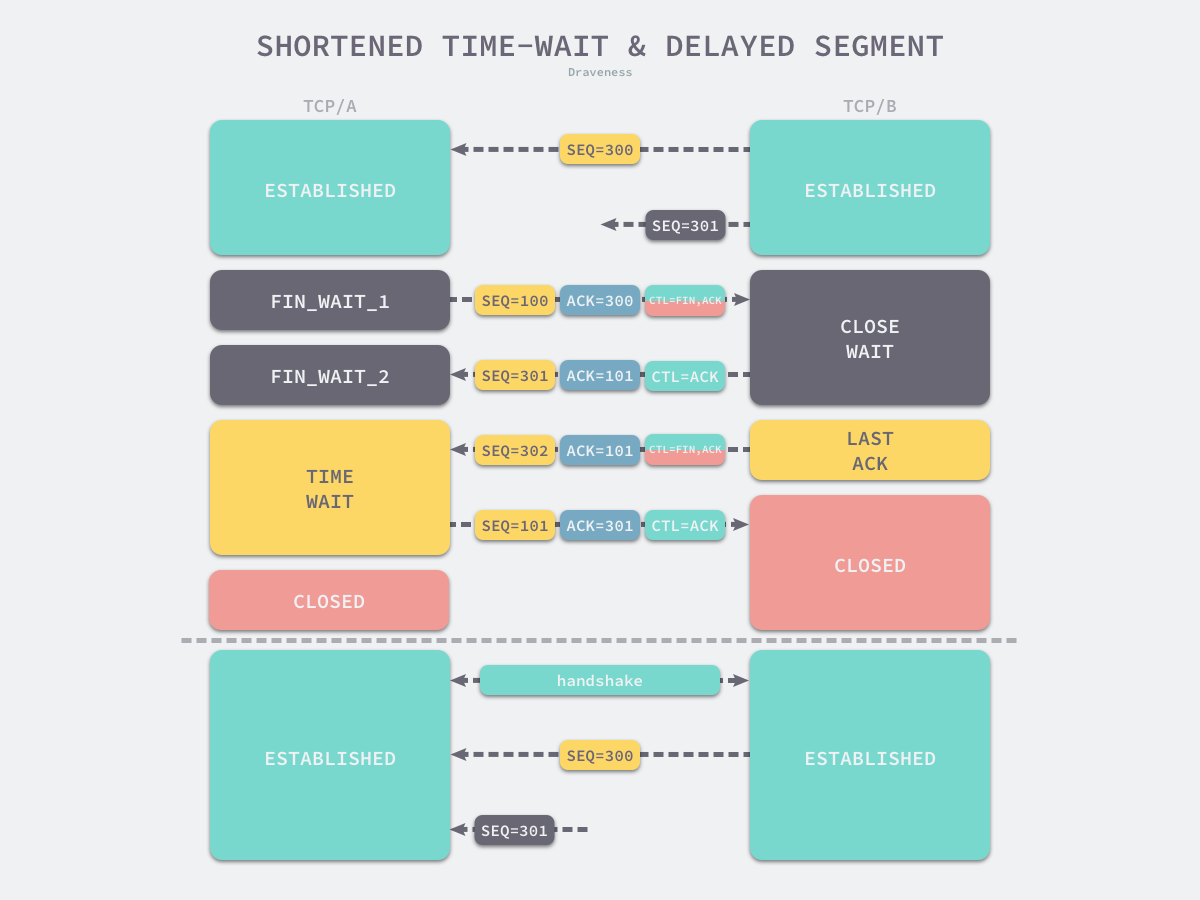 RFC 793 states that TCP connections need to wait 2 times the MSL in TIME_WAIT, but it does not explain where the double comes from.

The RFC 793 documentation sets the MSL time to 120 seconds, or two minutes, however this is not a tightly extrapolated value, but rather an engineering choice, and there is no problem if we are asked to change the OS settings based on the service’s historical experience; in fact, earlier versions of Linux started setting the wait time for TIME_WAIT TCP _TIMEWAIT_LEN to 60 seconds in order to more quickly reuse TCP connection resources

On Linux, clients can establish connections to remote servers using port numbers 32,768 to 61,000, for a total of 28,232 port numbers, and applications can choose from any of nearly 30,000 port numbers.

However, if the host has created more than 28,232 TCP connections to a specific port on the target host in the last minute, then an error will occur if a new TCP connection is created, which means that if we do not adjust the host’s configuration, then the maximum number of TCP connections that can be created per second is ~470

From the definition of the TIME_WAIT state in RFC 793, we can find another important role for this state, waiting long enough to make sure that the remote TCP connection has received the ACK corresponding to its outgoing termination message FIN.

TIME-WAIT - represents waiting for enough time to pass to be sure the remote TCP received the acknowledgment of its connection termination request. 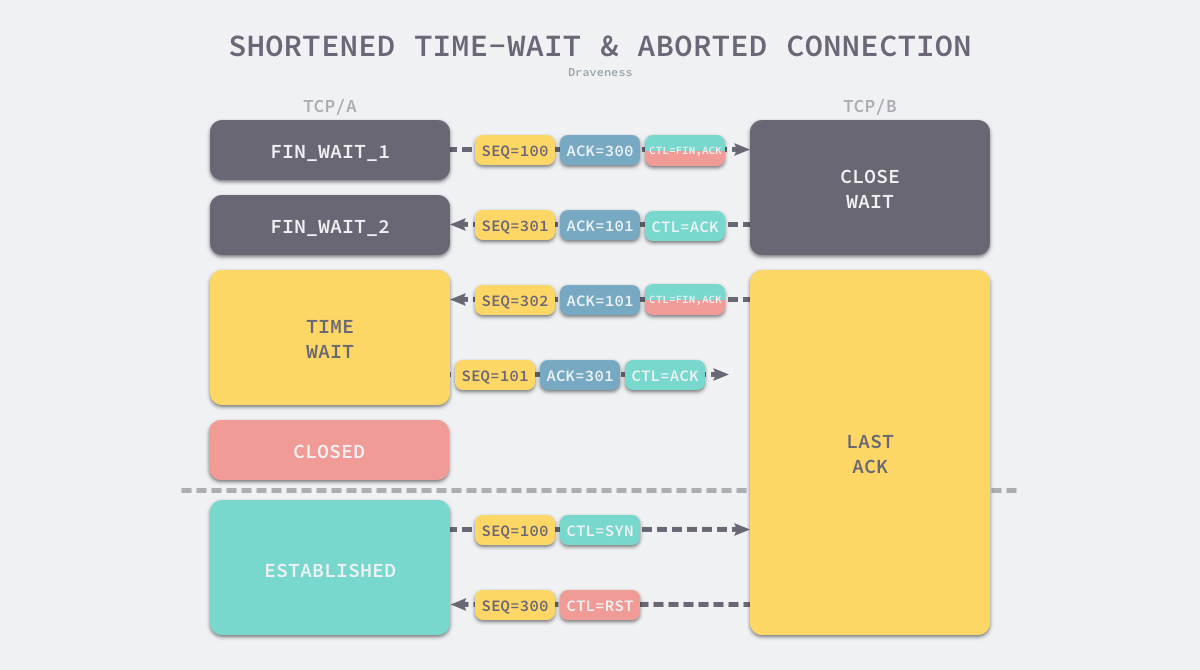 By default, if the client waits long enough it will encounter either

As long as the client waits for 2 MSL, the connection between the client and the server is closed normally, and the probability that a newly created TCP connection will be affected is negligible, ensuring the reliability of data transmission.

There are some scenarios where a 60-second wait for destruction is really unacceptable, e.g., highly concurrent stress tests. When we test the throughput and latency of a remote service with concurrent requests, a large number of TCP connections in the TIME_WAIT state can be generated locally, and active connections can be viewed on macOS using the command shown below.

Note that another common TCP configuration item, net.ipv4.tcp_tw_recycle, has been removed in Linux 4.12, so we can no longer This configuration solves the problems caused by the TIME_WAIT design.

The TIME_WAIT state of TCP plays a very important role as it is an indispensable part of the TCP protocol reliability design, and if it can be solved by adding machines, then we need to understand the design rationale behind it and avoid modifying the default configuration as much as possible, as the Linux manual says, when modifying these configurations Here, let’s revisit the reason for the TIME_WAIT state in the TCP protocol, which causes the following problems when re-establishing a connection to a remote using the same port number if the client is not waiting long enough.

The TIME_WAIT state is the result of TCP’s struggle with uncertain network latency, and uncertainty is the biggest impediment to the TCP protocol on the road to reliability. To conclude, let’s look at some more open-ended related issues, and the interested reader can ponder the following questions.