Vault is a secrets management, encryption-as-a-service and privilege management tool from hashicorp. Its features are briefly described as follows.

Before using Vault, we were using Apollo, a Ctrip open source, as a distributed configuration center for microservices.

Apollo is very popular in China. It is powerful, supports configuration inheritance, and also provides HTTP API for automation. The disadvantage is that permission management and secrets management are weak, and it does not support information encryption, which is not suitable for direct storage of sensitive information. So we have switched to Vault.

At present, our local CI/CD streamline and microservice system on the cloud are using Vault to do secrets management.

Let’s start with a diagram of the Vault architecture. 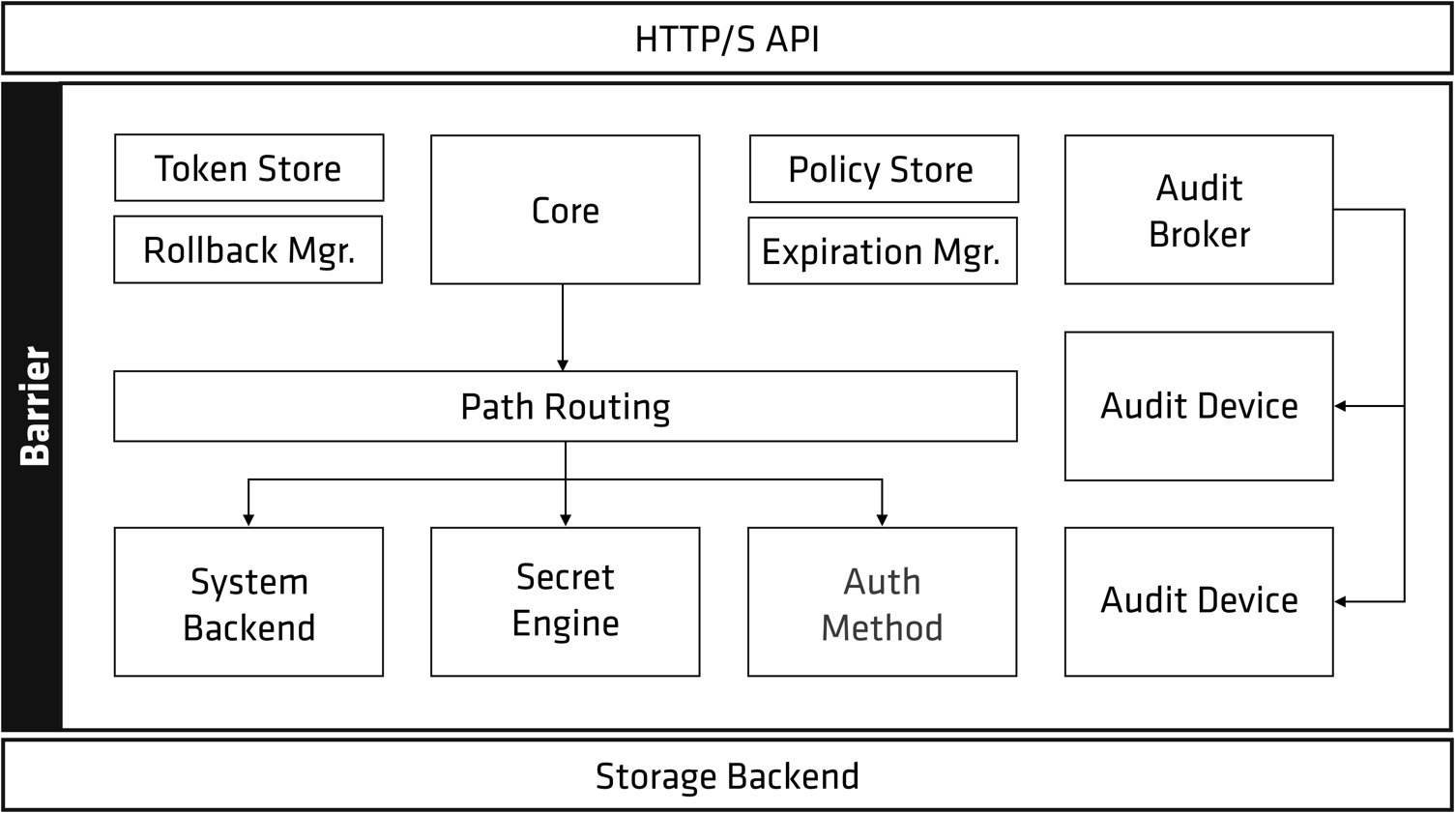 As you can see, almost all Vault components are collectively called “Barrier”, and the Vault can be simply divided into three parts: Storage Backend, Barrier and HTTP/S API.

In analogy to a bank vault, the Barrier is the “steel” and “concrete” surrounding the Vault, through which all data flows between the Storage Backend and the client.

Much like the door to a bank vault, the Barrier must be unsealed before the data in the Storage Backend can be decrypted.

Initialization: Vault needs to be initialized when it is first started, this step generates an Encryption Key which is used to encrypt the data.

Unseal: After the Vault is started, it will enter the “Sealed” state because it does not know the “Encryption Key”. 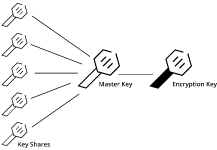 The number of “Key Shares” and the minimum number of key shares needed to rebuild the “master key” can be adjusted. The Shamir key sharing algorithm can also be turned off, so that the master key will be used directly in Unseal.

After unblocking is complete, Vault is ready to start processing requests.

The entire processing of HTTP requests is managed by the vault core, which forces ACL checks and ensures audit logging is completed.

When a client first connects to the vault, it needs to complete authentication. vault’s “auth methods” module has a number of authentication methods to choose from.

Authentication requests flow through Core and into auth methods, which determine whether the request is valid and return a list of “policies”.

ACL Policies are managed and stored by the policy store, and ACL checks are performed by the core. The default behavior of ACLs is deny, which means that an action will be denied unless the Policy is explicitly configured to allow it.

After the authentication is done by auth methods and the returned “associated policies” are OK, the “token store” will generate and manage a new token which will be returned to the client for subsequent requests.

Similar to cookies on web sites, tokens have a lease or expiration date, which enhances security.

The token is associated with policy policies that are used to verify the permissions of the request.

If the client allows the lease to expire, the expiration manager will automatically revoke the secret.

Core is responsible for processing requests and response logs from the audit broker, sending requests to all configured audit devices.

Secret Engines are components that store, generate or encrypt data and are very flexible.

Some Secret Engines simply store and read data, such as kv, which can be thought of as an encrypted Redis. Others connect to other services and generate dynamic credentials on demand.

There are also Secret Engines that provide “encryption as a service” capabilities, such as transit, certificate management, etc.

The official recommendation is to deploy vault via Helm.

0. How do I choose a storage backend?

First, we definitely need HA, or at least retain the ability to upgrade to HA, so it is not recommended to choose a backend that does not support HA.

The exact choice varies depending on the team’s experience, and people tend to prefer to use a backend they are familiar with and know well, or go with a cloud service.

For example, if we are familiar with MySQL/PostgreSQL, and we don’t need to think too much about maintenance when using a database provided by a cloud service, and MySQL as a common protocol is not kidnapped by cloud vendors, then we tend to use MySQL/PostgreSQL.

And if you are locally self-built, then you may prefer to use Etcd/Consul/Raft for backend storage.

Recommended for local development test environments, or other environments that do not require high availability.

The docker-compose.yml example is as follows.

Then docker-compose up -d will start running a vault instance.

Refer to the downloaded . /vault/values.yaml to write custom-values.yaml and deploy a HA vault with mysql as the backend storage:

Deploying a vault via helm deploys a three-copy StatefulSet by default, but all three copies will be in a NotReady state (as will the docker deployment). Next, you need to manually initialize and unblock the vault in order to Ready :

This completes the deployment, but be aware that the **vault instance needs to be unblocked again after each restart! That is, re-do the second step! **

Without setting auto unseal, vault has to unseal all vault instances manually every time it restarts, which is really troublesome.

To simplify this process, you can consider configuring auto unseal to allow vault unblocking automatically.

There are currently two ways to do this.

This way the serviceaccount used by the vault will have access to awskms itself and will not need to access awskms via access_key/secret_key.

For more information on how to bind IAM roles to k8s serviceaccounts, see the official documentation: IAM roles for EKS service accounts

When you are done, modify the helm configuration provided earlier, deploy it, and finally initialize it with the following command.

Then it’s done, you can try to delete the vault pod, the new pod should be automatically unblocked.

Vault itself is a complex secrets tool that provides Web UI and CLI for manually managing and viewing the contents of Vault.

But as a DevOps, we of course prefer an automated approach, and there are two options:

Our test environment uses pulumi-vault to automate the configuration of the vault policy and kubernetes role, and then automate the injection of all secrets for testing.

The advantage of using pulumi to manage the vault configuration is great because the sensitive information of the resources on the cloud (database account passwords, resource IDs, RAM subaccounts) are created by pulumi.

Combined with the use of pulumi_valut, the sensitive information is automatically generated and immediately saved to the vault, making it fully automated.

Subsequent microservices can then read sensitive information directly from the vault through kubernetes authentication.

Or it can be written to a local vault for backup, so that administrators can log in and view the sensitive information when needed.

pulumi_vault itself is quite simple, declarative configuration, just use it directly.

However, it must require VAULT_TOKEN as authentication credentials (in practice, userpass/approle cannot be used directly, it will report no vault token found), and pulumi will also generate a temporary child token, which will be used for subsequent operations.

The root token should be blocked and should not be enabled except for emergencies.

So how should I generate a token with limited privileges for the vault to use? My approach is to create a userpass account and give it limited privileges via policy. Then manually (or automatically) login to get the token, and then provide the token to pulumi_vault.

The catch is that you have to give the userpass account the permission to create a child token.

Without this permission, pulumi_vault will keep reporting errors.

Then you have to give it the permissions it needs to “automate the configuration”, such as creating/updating policy/secrets/kubernetes automatically, as shown in the following example: There are two ways for applications to read the configuration in vault.

Both of these methods can be used to authenticate and assign permissions with the Kubernetes ServiceAccount.

The following is an example of how to inject secrets into a Pod as a file in Sidecar mode.

1. Deploy and configure the vault agent

If you do not have this requirement, please skip this section.

kubernetes can also be integrated with external vault instances, with only the vault-agent deployed in the cluster.

This is suitable for multiple kubernetes clusters and other APPs that share a single vault instance, such as our local development and testing clusters, which all share the same vault instance to facilitate unified management of application secrets.

First, use helm chart to deploy the vault-agent to access the external vault instance. The custom-values.yaml example used is as follows.

Obviously there is no kubectl or kubeconfig inside the vault instance, so for simplicity, the following vault commands can also be done via the Web UI.

This completes the integration of kubernetes with the external vault!

2. Associate the k8s rbac permissions system with the vault

Next things to do.

The first and second steps can be automated through the vault api. The third step can be done during deployment via kubectl.

For convenience, it is recommended to use the same name as the microservice for all three configurations, vault policy / role / k8s serviceaccount.

In the above configuration, the role acts as a primer, associating the k8s serviceaccount and vault policy configurations.

After this, each microservice will be able to read all the information in my-app from the vault via serviceaccount.

The next step is to inject the configuration into the microservice container, which requires the use of Agent Sidecar Injector. vault automates the injection and dynamic update of the configuration via sidecar.

Specifically, a bunch of Agent Sidecar Injector annotations are added to the Pod, or if there are more configurations, they can be saved using configmap and referenced in the annotations.

Note that vault-inject-agent has two modes of operation.

For the vault-agent configuration, the following should be noted.

The most popular configuration file format is json/yaml, so take json as an example, for each microservice’s kv data, consider saving all its personalized configuration under <engine-name>/<service-name>/, and then inject the configuration using the following template.

Note: For v2 kv secrets, the list interface has changed, so when traversing v2 kv secrets, you must write range secrets "<engine-name>/metadata/<service-name>/", i.e. insert metadata in between, and read/list permissions for <engine-name>/metadata/<service-name>/ must be open in the policy! The official documentation doesn’t mention this at all, I figured this out by debugging with wireshark packet grabbing and comparing with the official KV Secrets Engine - Version 2 (API).

The generated content will be in json format, but there is an incompatibility: the last secrets has a comma , at the end of the rendered effect.

Because of the trailing comma, parsing it directly using the json standard library will report an error. So how do I parse it? I found the solution on the almighty stackoverflow: yaml is fully compatible with json syntax and supports trailing comma!

Take python for example, yaml.safe_load() will parse the json generated by vault perfectly.

5. Expanding: Other ways to use vault in kubernetes

In addition to using the official sidecar schema for secrets injection, the community has provided some other options, which can be found at

The official sidecar/init-container model is still the most recommended.