By doing so above, we can directly see which functions are called by chan.

qcount represents the number of elements in chan that have been received but not yet taken, the function len can return the value of this field.

sendx: the position in the buffer of the pointer to the sent data.

recvx: the position in the buffer of the pointer to receive the request.

The types of sendq and recvq are structures of waitq.

The waitq is connected inside a sudog bidirectional chain table, which holds the waiting goroutine . The entire chan legend looks like this.

Here’s a look at creating chan, we can also see through the assembly results that make(chan int) This code will call into the makechan function of runtime.

First we can see the calculation of hchanSize.

maxAlign is 8, then the binary of maxAlign-1 is 111, then and int(unsafe.Sizeof(hchan{})) to take and is to take its lower three, hchanSize is obtained as an integer multiple of 8, do alignment use.

There are three cases of switch here. The first case is that the required size of the buffer is 0, so when allocating memory for hchan, only memory of size sizeof(hchan) needs to be allocated.

The second case is where the required size of the buffer is not 0 and the data type does not contain a pointer, then allocate contiguous memory. Note that we can specify the type as a pointer type when creating the channel.

The third case is when the required size of the buffer is not 0 and the data type contains a pointer, then instead of using add to keep hchan and buf together, a separate piece of memory is requested for buf.

Before we look at the code for sending data, let’s look at what is blocking and non-blocking for a channel.

In general, a goroutine that inserts data into a channel blocks until the insertion is successful, when the argument passed is block=true, i.e., a blocking call.

Non-blocking is only this case.

The compiler will change it to.

The block passed in by the selectnbsend method is false.

Sending data to the channel we can see from the assembly result is implemented in runtime by chansend, the method is rather long and we will understand it in sections.

Here a judgment is made on chan, if it is empty, then for non-blocking sends, it returns false directly; for blocking channels, the goroutine is hung and never returned.

Guaranteed, so after judging closed although it is not closed, then after reading still may be in this instant from the unclosed state to closed state. Then there are two possibilities.

Here’s a look at the locking part of the code.

After entering the lock area, we also need to judge the status of the following close, and then take out a receiver from recvq, if there is already a receiver, then send the current enqueue message to the first receiver. The point to note here is that if there is a receiver waiting in the queue, the buffer is empty at this time.

Since we are analyzing the code line by line, let’s go to send to see the implementation.

In the send method, sg is the object packed by the goroutine, ep is the pointer to the corresponding data to be sent, and the sendDirect method will call memmove to make a memory copy of the data. Then the goready function will wake up the corresponding goroutine for scheduling.

Go back to the chansend method and continue on.

Here it will determine if the buf buffer is full, if not, then it will find the index location of the buf to be filled with data, call the typedmemmove method to copy the data to the buf, and then reset the sendx offset.

It is also important to note here that if the buffer is 0, then it will also enter here and will call gopark to block immediately, so you need to remember to receive data when using it to prevent the end that sends data to chan from blocking forever, e.g.

If here in select directly timeout returned without calling result := <-ch, then goroutine will block forever.

This is the end of the code sent here, the whole process is roughly as follows.

The function to get data from chan is chanrecv, and we will see the code implementation.

chanrecv method and chansend method is the same, first also do non-empty judgment, if chan is not initialized, then if non-blocking call, then directly return (false,false), blocking call will be directly wait;.

The following two if judgments I put together to explain, because here and chansend is not the same, chanrecv to return different results according to different conditions need.

The judgment before locking is a boundary condition judgment: if the non-blocking call will determine that chan has no sender (dataqsiz is empty and the send queue is empty), or chan’s buffer is empty (dataqsiz>0 and qcount==0) and chan is not closed, then it needs to return (false,false); while chan is closed and there is no data in buf, it needs to return (true,false).

In order to achieve this requirement, so the boundary conditions inside the chanrecv method are judged using the atomic method to obtain.

Since it is necessary to correctly get that chan is closed and the buf is empty to return (true, false) instead of (false,false), it is necessary to use atomic to get the parameters to prevent reordering (Happens Before) before locking, so the order of the qcount and closed read operations here must be secured by atomic operations order.

Then add 1 to recvx, which is equivalent to moving the new data to the end of the queue, then assign the value of recvx to sendx, and finally call goready to wake up the sender, which is a bit roundabout here, so let’s show it through pictures. 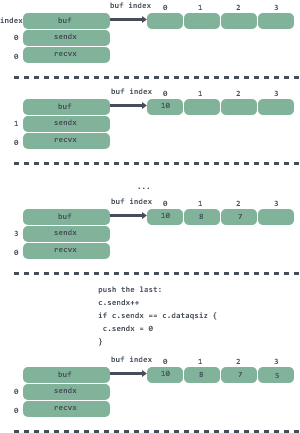 What is shown here is that the data is copied into the buffer in chansend, and the pointer to sendx is set to 0 when the data is full, so when the buf ring queue is full sendx equals recvx.

Then see what is done to hand over the data in the buffer when the sender queue in chanrecv has data. 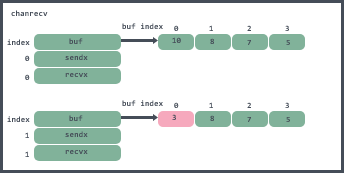 Moving on to the next page.

The following is the case when there is no data in the buffer.

If it is a non-blocking call, it returns directly; a blocking call will wrap the current goroutine into a sudog, then add the sudog to the receive queue and call gopark to block the goroutine and wait to be woken up.

Closing the channel will call to the closechan method.

chan is a very powerful tool in go, it can achieve a lot of functions, but in order to be able to use it efficiently we should also understand how it is implemented inside. This article is a step-by-step analysis to understand how go’s chan is implemented from scratch, and what matters need to be noted in the use of the process, chan’s buf ring queue is how to maintain, I hope it can help you ~