We all know how to use WaitGroup, but we also need to know how it is implemented, so that we can avoid the panic caused by incorrect use in the project as much as possible, and this article will also write about the memory alignment aspect to do a resolution, I hope you like it.

I will not give examples, the Internet is a lot of, here we go straight to the point.

Here at the very beginning, WaitGroup shows off its muscles, let’s see how the big bully writes his code and think about how an atomic operation operates on different architectural platforms, and let’s take a look at memory alignment before looking at why it’s done inside the state method.

On Wikipedia https://en.wikipedia.org/wiki/Data_structure_alignment we can see the definition of memory alignment.

A memory address a is said to be n-byte aligned when a is a multiple of n bytes (where n is a power of 2).

In short, the CPU now accesses memory bytes at a time, for example, the 32-bit architecture accesses 4bytes at a time, the processor can only start reading data from memory with an address that is a multiple of 4, so the data is required to be stored at a multiple of 4 when the first address value is stored, which is called memory alignment.

A hands-on look at memory alignment is given by the following example.

The following is an example of running in a 32-bit architecture.

The default alignment size in a system with 32-bit architecture is 4bytes.

Similarly, it is more compact compared to structure B.

Before we talk about it, we need to note that noCopy is an empty structure with size 0, so we don’t need to do memory alignment, so we can ignore this field when we look at it.

In the WaitGroup, the uint32 array is used to construct the state1 field, and then different return values are constructed according to the number of bits in the system, so I will talk about how to build the waiter number, count value, and semaphore through the sate1 field.

So can the 64-bit architecture get the first element of state1 to represent semap, and the last two elements to be spelled into 64-bit return?

The answer is naturally no, because the alignment of uint32 is guaranteed to be 4bytes, and the fixed length of a one-time transaction in the 64-bit architecture is 8bytes, so if the last two elements of state1 represent a 64-bit word field, the CPU needs to read the memory twice, which cannot guarantee atomicity.

But in 32-bit architecture, a word length is 4bytes, to operate 64-bit data distributed in two data blocks, two operations are needed to complete the access. If there is a possibility of other operations modifying the data between the two operations, atomicity is not guaranteed.

Similarly, if the 32-bit architecture wants to operate atomically on 8bytes, it needs to be guaranteed by the caller that its data address is 64-bit aligned, otherwise the atomic access will have an exception, as we can see here https://golang.org/pkg/sync/atomic/#pkg-note-BUG that describes.

On ARM, x86-32, and 32-bit MIPS, it is the caller’s responsibility to arrange for 64-bit alignment of 64-bit words accessed atomically. The first word in a variable or in an allocated struct, array, or slice can be relied upon to be 64-bit aligned.

In 32-bit architecture, WaitGroup is allocated memory address randomly when it is initialized, so the location of the start of WaitGroup structure state1 is not necessarily 64-bit aligned, it may be: uintptr(unsafe.Pointer(&wg.state1))%8 = 4 , if such a situation occurs , then you need to use the first element of state1 for padding and the last two elements of state1 to merge into uint64 for statep.

Here is a small summary, because it took a lot of consulting to complete the above content to come up with this result. So here is a small summary, in the 64-bit architecture, the word length of each CPU operation is 8bytes, the compiler will automatically help us to initialize the address of the first field of the structure to 64-bit alignment, so the 64-bit architecture with the first two elements of state1 and into uint64 to represent statep, state1 last element represents semap. 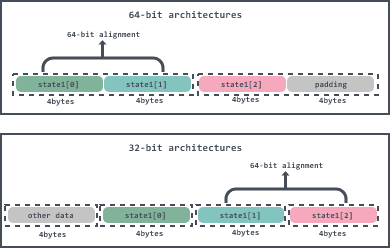 After reading the add method and wait method of waitgroup, we found that there are many checks in it, and improper use will lead to panic, so we need to summarize how to use it correctly.

In addition to the concept of memory alignment, we also learn through the source code what we need to do when using waitgroup in order to be compliant with the specification and not trigger a panic.