This article explains the rules for executing defer and introduces the defer type. It explains how defer function calls are done, mainly through heap allocation.

In the above example, the string Naveen is traversed using a for loop and then defer is called. These defer calls act as if they were stacked, and the last defer call pushed onto the stack is pulled out and executed first.

The defer declaration will first calculate the value of the parameter

In this example, the variable i is determined when defer is called, not when defer is executed, so the output of the above statement is 0.

An example is as follows.

Go made two optimizations to defer in versions 1.13 and 1.14, which significantly reduced the performance overhead of defer in most scenarios.

Allocation on the heap

Prior to Go 1.13 all defers were allocated on the heap, a mechanism that at compile time.

Allocation on the stack

It is worth noting that not all defers can be allocated on the stack in version 1.13. A defer in a loop, whether it is a display for loop or an implicit loop formed by goto, can only use heap allocation, even if it loops once.

Go 1.14 added open coding, a mechanism that inserts defer calls directly into functions before they return, eliminating the need for deferproc or deferprocStack operations at runtime. This optimization reduces the overhead of defer calls from ~35ns in version 1.13 to ~6ns or so.

However, certain conditions need to be met in order to trigger.

The parameters to note above are siz, heap, fn, link, openDefer which will be covered in the following analysis.

The analysis starts with a function call as the entry point.

Allocation on the heap

Let’s start with the example mentioned above and look at heap allocation from function calls. Note that running the following example on 1.15 does not allocate directly to the heap, but requires you to recompile the Go source code to force the defer to allocate to the heap.

Print the assembly using the command.

First of all, let’s look at the main function, there is nothing to say, it is a very simple call to the f function.

The following subparagraph looks at the calls to the f function.

Because the argument to the runtime.deferproc function is two arguments, as follows.

See here may have a question, in the pressure into the constant 8 when the size is int32 occupies 4 bytes size, why the second parameter does not start from 4 (SP), but to start from 8 (SP), this is because the need to do memory alignment caused.

In addition to the parameters, it should also be noted that the 16(SP) position is pressed into the 40(SP) address value. So the entire pre-call stack structure should look like the following.

Note that here the argp value is copied by a copy operation, so the argument is already determined when defer is called, not when it is executed, but here the value of an address is copied.

And we know that when allocated on the heap, defer is stored in the current Goroutine as a chain, so if there are 3 defers called separately, the last one called will be at the top of the chain.

For the newdefer function, the general idea is to fetch from P’s local cache pool, and if not, fetch half of defer from sched’s global cache pool to fill P’s local resource pool, and if there is still no available cache, allocate new defer and args directly from the heap. The memory allocation here is roughly the same as the memory allocator allocation, so we won’t analyze it again, but you can see for yourself if you are interested.

Let’s go back to the assembly of the f function.

Here it is very simple, write constant 6 directly to 40(SP) as the return value and then call runtime.deferreturn to execute defer.

*(*uintptr)(deferArgs(d)) What is stored here is actually the address value saved by the caller 16(SP). Then the caller’s stack frame is shown below.

Go to runtime.jmpdefer to see how this is done.

This assembly is very interesting, the jmpdefer function, since it was called by runtime.deferreturn, now has the following call stack frame

The arguments passed to the jmpdefer function are 0(FP) for the fn function address, and 8(FP) for the SP of the call stack of the f function. 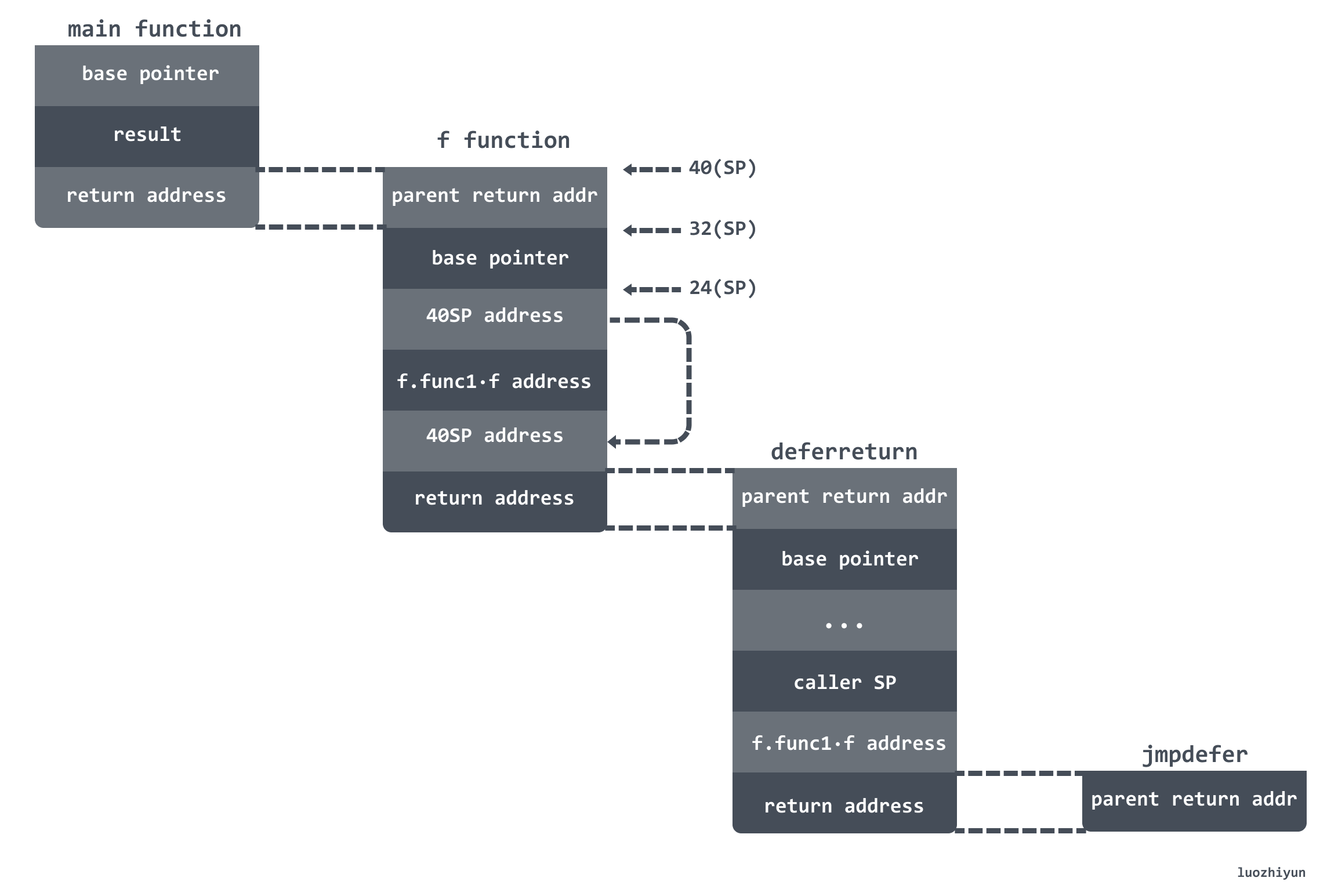 So the following sentence represents the return address of the runtime.deferreturn call stack written to SP.

Then -8(SP) represents the Base Pointer of the runtime.deferreturn call stack.

We will focus on explaining why the value of the SP pointer minus 5 is used to obtain the address value of runtime.deferreturn.

We return to the assembly of the f function call.

Then when we finally jump to the f.func1 function, the call stack is as follows. 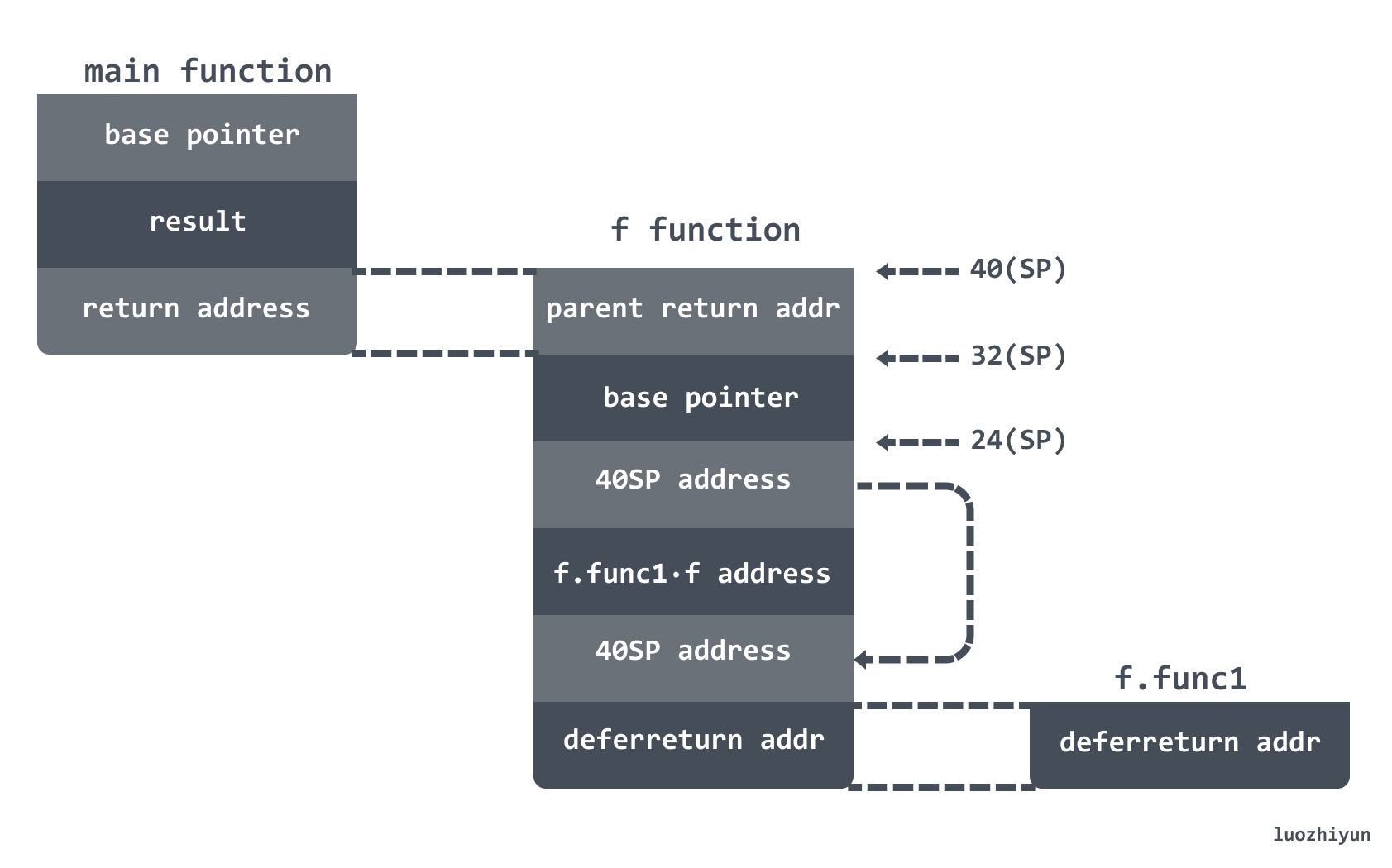 Here’s another short look at the f.func1 function call.

The call here is very simple: get the data pointed to by the 8(SP) address value and do the arithmetic, then write the result to the stack and return.

Here we have basically shown you the whole process of calling defer functions through heap allocation. The answer is that the defer argument passed during the defer call is a pointer to the return value, so the return value is modified when defer is finally executed.

So what if anonymous return value functions are passed? For example, something like the following.

Print the compilation below.

Here is a diagram comparing the two after calling runtime.deferreturn stack frames.

The above sequence of analysis also answers a few questions in passing.

As mentioned at the beginning, defer on-stack allocation was added after Go version 1.13, so one difference from heap allocation is that defer is created on the stack via deferprocStack.

Go goes through the SSA stage at compile time, and if it’s a stack allocation, then it needs to use the compiler to initialize the _defer record directly on the function call frame and pass it as an argument to deferprocStack. The rest of the execution process is no different from heap allocation.

For the deferprocStack function let’s look briefly at.

The main function is to assign a value to the _defer structure and return it.

The Go language was optimized in 1.14 by inlining code so that calls to the defer function are made directly at the end of the function, with little additional overhead. In the build phase of SSA buildssa will insert open coding based on a check to see if the condition is met. Since the code in the build phase of SSA is not well understood, only the basics are given below and no code analysis is involved.

We can compile a printout of the example for the allocation on the heap.

We can see in the assembly output above that the defer function is inserted directly into the end of the function to be called.

This example above is easy to optimize, but what if a defer is in a conditional statement that must not be determined until runtime?

The defer bit delay bit is also used in open coding to determine whether a conditional branch should be executed or not. This delay bit is an 8-bit binary code, so only a maximum of 8 defers can be used in this optimization, including the defer in the conditionals. Each bit is set to 1 to determine if the delay statement is set at runtime, and if so, the call occurs. Otherwise, it is not called.

For example, an example is explained in the following article.

At the stage of creating a deferred call, it is first recorded which defer with conditions are triggered by a specific location of the deferred bits.

Before the function returns and exits, the exit function creates a check code for the delayed bits in reverse order:

Before the function exits, it determines whether the position is 1 by taking the delayed bits with the corresponding position, and if it is 1, then the defer function can be executed.

This article explains the execution rules of defer and introduces the defer type. The main purpose of this article is to explain how defer function calls are made through heap allocation, such as: function calls to understand “defer argument passing”, “how multiple defer statements are executed”, “and what is the order of execution of defer, return, and return value”, and other issues. Through this analysis, we hope you can have a deeper understanding of defer.