In version 1.9 of Go, in order to solve the waiting goroutine may have been unable to obtain the lock, the hunger mode was added to make the lock more fair, and the unfair waiting time is limited to 1 millisecond.

The meaning of the state field is more complex, as shown below, the lowest three indicate mutexLocked, mutexWoken, mutexStarving, state is a total of 32 bits in length, so the remaining position, used to indicate that there can be 1«(32-3) goroutine waiting for the release of the mutual exclusion lock.

The code representation is as follows.

You can know that the current lock state must be locked and cannot be in a hungry state for this judgment to be true, and then see if iter satisfies the limit on the number of times, and if both are true, then continue down the line.

The inner if contains four judgments.

If both are satisfied, then set the awoke state to true, then add one to the spin count, and reset the state.

Continue to the next page.

There are two cases to go here: 1. the spin exceeds the number of times; 2. the lock is not currently held.

So the first judgment, if the lock is currently added, but not in a hungry state, will also repeat the setting new |= mutexLocked, that is, the mutexLocked state is set to 1.

If old is already hungry or has been locked, then it is necessary to set Waiter plus one, indicating that this goroutine will not acquire a lock below and will wait.

awoke if set successfully at spin time, then new &^= mutexWoken here to eliminate the mutexWoken flag bit. Because the subsequent process is likely to hang the current thread, it needs to wait for other goroutine to release the lock to wake up, if the unlock time found the mutexWoken position is not 0, then it will not go to wake up, then the thread can not wake up again to add locks.

To here, first will CAS set the new state, if set successfully then go down, otherwise return to set the state in a loop afterwards. After successful setting.

The following illustration is used to explain.

This part of the illustration is the operation before hibernation, hibernation will be based on the state of old to determine whether it can directly obtain the lock, if the old state is not locked, nor hungry, then directly break return, because this situation will be set in CAS plus lock;.

Then down to determine whether waitStartTime is equal to 0, if not equal, that is not the first time to come, but was woken up after coming here, then you can not directly to the end of the team and then hibernate, but to the head of the team to prevent a long time to grab the lock. 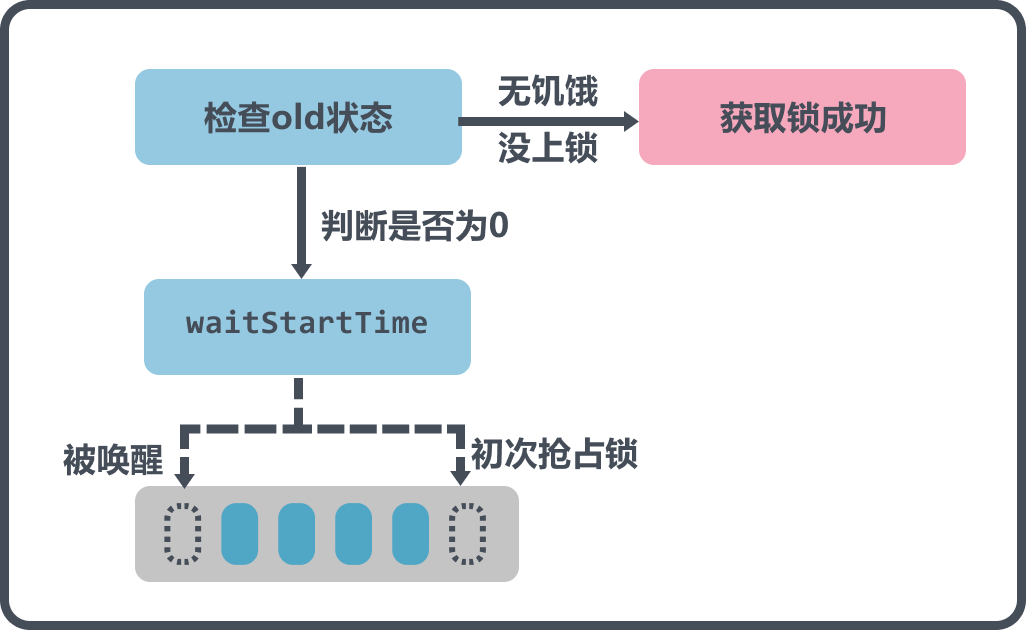 The following diagram is the schematic diagram after waking up, how to be woken up can be directly to the jump to the unlocking part to see the end and then come back.

At the beginning of the wake-up call, we need to determine the current starving state and the waiting time if it exceeds 1ms, then starving will be set to true.

Next there will be an if judgment, there is a detail here, because it is woken up, so you need to reacquire the lock before judgment, if the current is not hungry mode, then it will return directly, and then re-enter the for loop.

If the current is in starvation mode, then it will calculate the delta for locking, and the current goroutine is able to directly seize the lock, so you need to waiter minus one, if starving is not hungry, or waiting time does not exceed 1ms, or waiter only one, then you also need to delta minus mutexStarving, said to exit the starvation mode.

Finally, the state is added to delta by AddInt32. The reason why it can be added directly here is that the mutexLocked value of the state is definitely 0, and the mutexStarving bit is definitely 1, and there is at least one current goroutine in the waiting queue before acquiring the lock, so the waiter can be directly subtracted by 1. 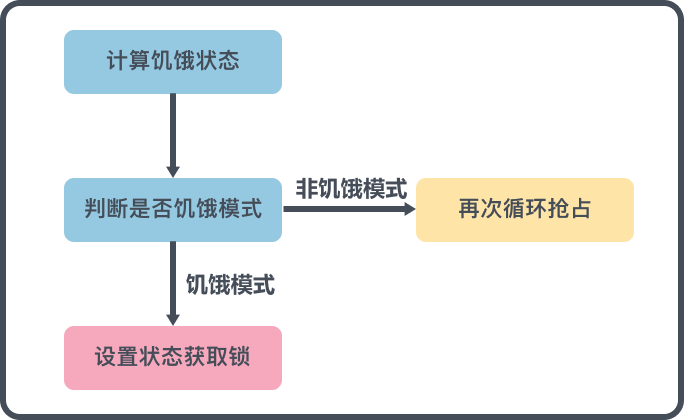 The main thing here is that AddInt32 resets the state’s mutexLocked bit to 0, and then determines whether the new state value is not 0. If it is not 0, the unlockSlow method is called.

The unlockSlow method is also divided into normal mode and starvation mode unlocking.

in normal mode, if there is no waiter, or if one of mutexLocked, mutexStarving, or mutexWoken is not zero indicating that another goroutine is already processing, return directly; if there is a waiter for the mutex lock, then wake up the waiter in the waiting queue directly by runtime_Semrelease.

In starvation mode, the runtime_Semrelease method is called directly to give the current lock to the next waiter that is trying to get the lock, and the waiter will get the lock when it is woken up.

The design of Mutex is very concise, from the code can be seen in order to design such a simple code state a field can be used as four fields. And in order to solve the goroutine starvation problem, Mutex in 1.9 added the starvation mode to make the lock more fair, unfair waiting time is limited to 1 millisecond, but at the same time, the code has become more and more difficult to understand, so to understand its ideas above need to slowly waste some time to experience it in detail.