Go is known to be an automatic garbage collection programming language that uses a three-color concurrent tagging algorithm to tag objects and recycle them. If you want to develop a high-performance application using Go, you have to consider the performance impact of garbage collection. Because Go has a STW (stop-the-world) time during garbage collection, and it takes time to mark objects if there are too many.

So if you use an object pool to create objects and increase the reuse of objects, you don’t have to recreate objects on the heap when you use them, which saves overhead.

In Go, sync.Pool provides object pooling. It provides three methods to the public: New, Get and Put. Here is a short example to illustrate the use of Pool.

Here I used the init method to initialize a pool, then get three times and put once into the pool, if there is no object in the pool, then the New function will be called to create a new object, otherwise it will be obtained from the object put in.

noCopy inside the Pool structure means that this structure is forbidden to be copied, it can be effective when we use the go vet tool.

The New function is set when the pool is created, when the pool has no cached objects, it will call the New method to generate a new object.

Let’s move on to the structure of the pool. 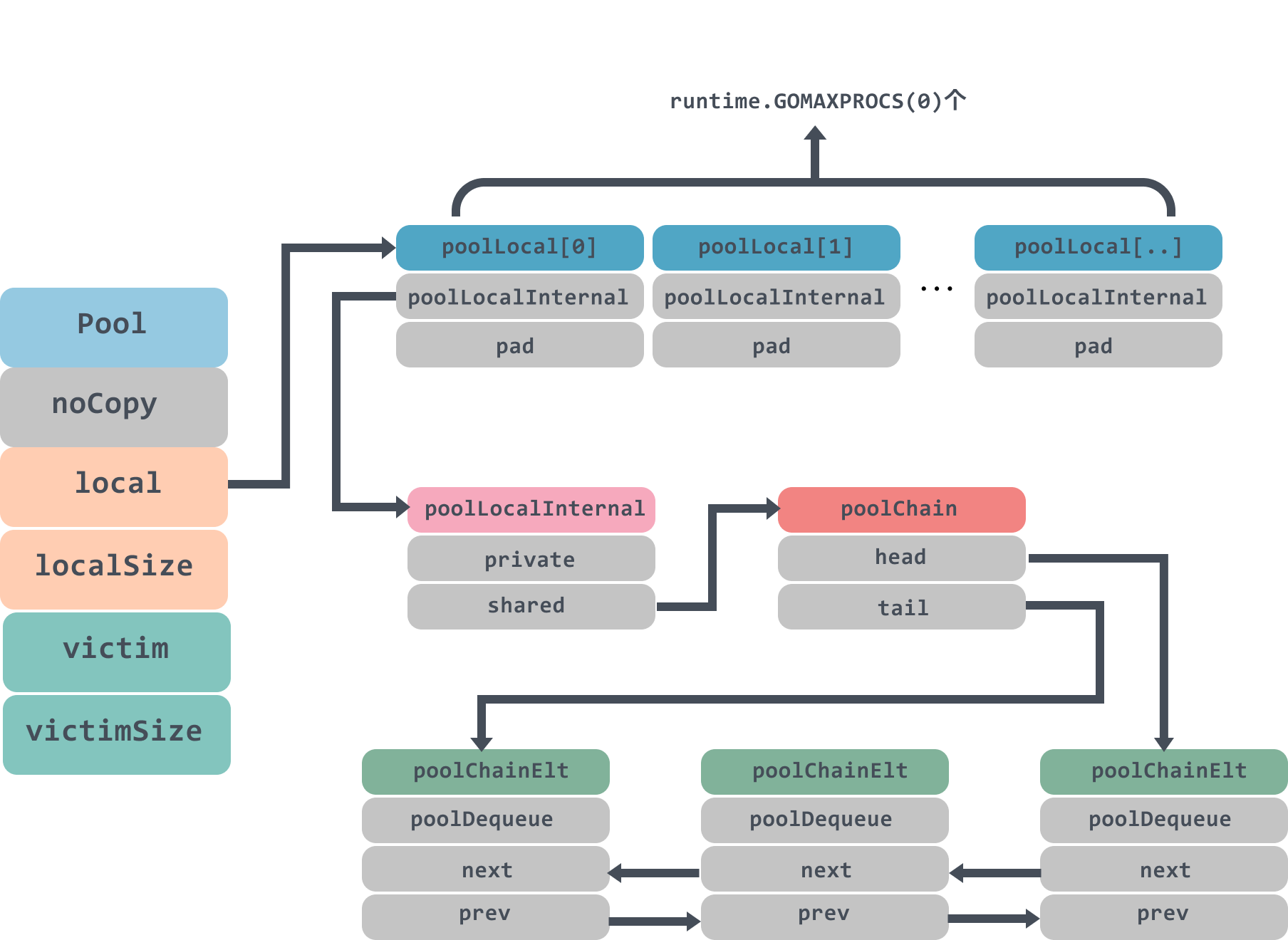 By this design, each P has its own local space, and multiple goroutines use the same Pool to reduce competition and improve performance. Students who are confused about the P, G, and M of goroutine may want to check out this article: The Go scheduler.

That’s what false sharing is: one core update a variable would force other cores to update cache either.

private represents an element of the cache that can only be accessed by one of the corresponding P’s. Since a P can only execute one goroutine at a time, there is no concurrency problem.

shared can be accessed by any P, but only the local P can pushHead/popHead, other P can popTail.

The model of this double-ended queue is roughly like this. 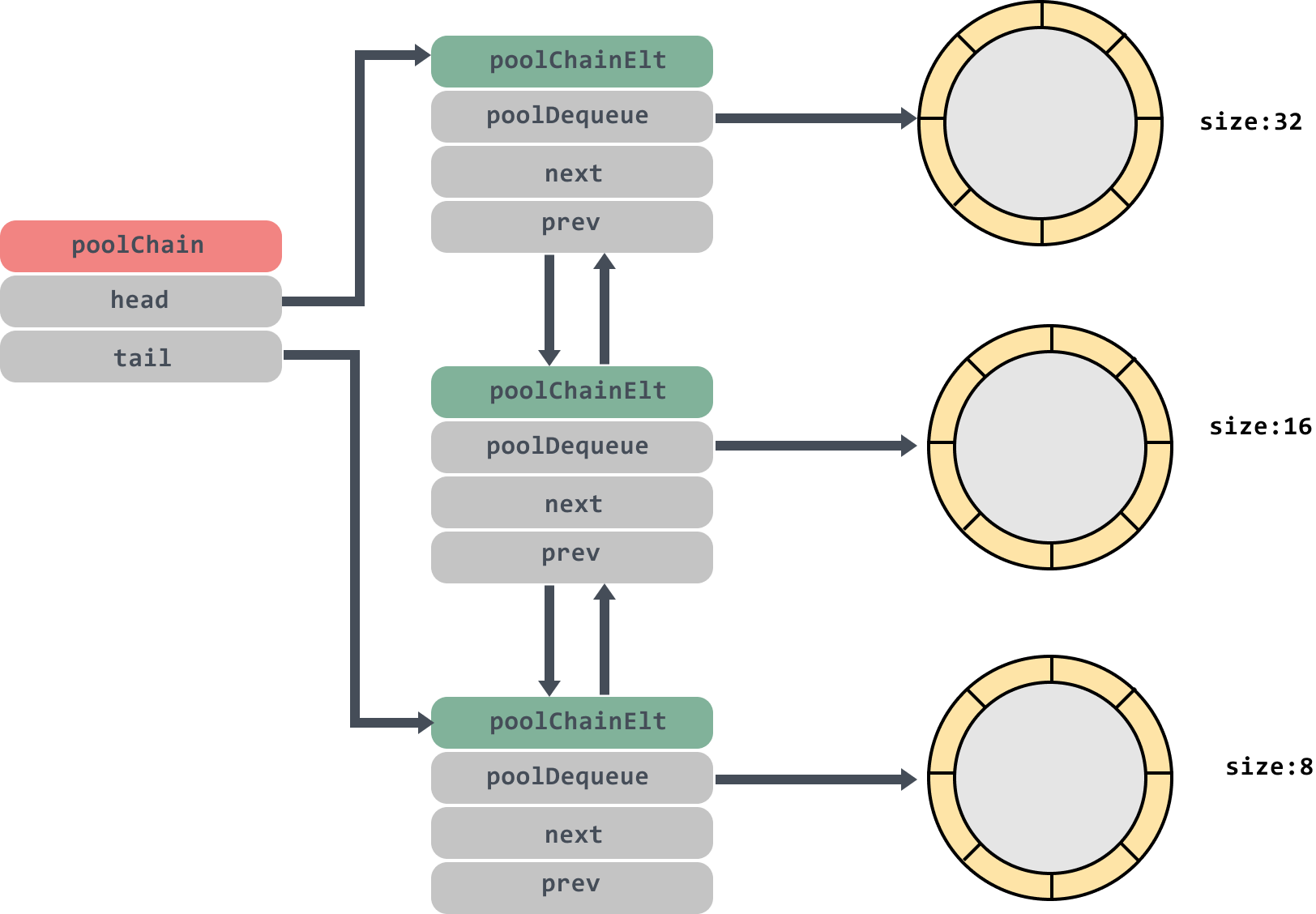 poolDequeue inside the ring queue size is fixed, later analysis of the source code we will see, when the ring queue is full will create a size is twice the original size of the ring queue. Everyone this picture to experience, will be repeatedly used.

If the current pid is greater than the localSize, then it means that the Pool has not yet created the corresponding poolLocal, then call pinSlow to create the work, otherwise call indexLocal to take out the pid corresponding to the poolLocal and return.

indexLocal inside is using the address operation, the passed i is the index value of the array, so you need to get the size of poolLocal{} to do a bit of address displacement operation, and then turn it into a poolLocal address to return.

Because allPoolsMu is a global Mutex lock, locking will be slow and may be blocked, so the runtime_procUnpin method is called before locking to unlock the pin operation.

After unbinding, pinSlow may have been called by other threads and p.local may have changed. So at this point the pid needs to be checked again.

Finally, the local is initialized and the local and localSize are set using atomic operations to return the local corresponding to the current P.

This is the end of the pin method. Draw a simple diagram to describe the whole process. 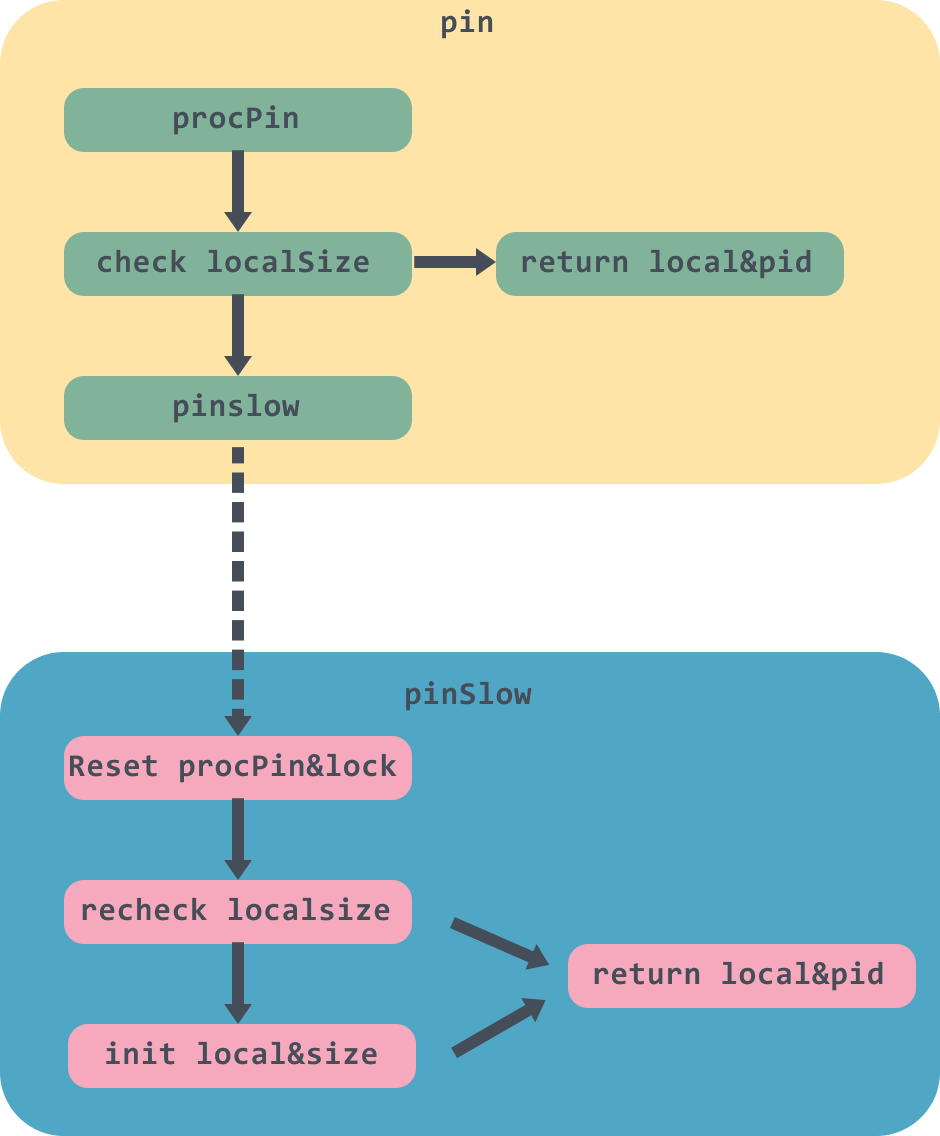 Let’s go back to the Get method down below, and I’ll post the code again for easier reading.

If there is no value in private, then the popHead method of shared will be called to get the value.

Then there is a for loop will traverse down from the head node of the poolChain one by one, until the object is returned.

If shared’s popHead method also did not get the value, then you need to call getSlow method to get.

The getSlow method iterates through the list of locals, and here it is important to note that the iteration starts at the poolLocal with index pid+1, and tries to call the popTail method of shared to get the object; if it doesn’t get it, then it looks for it from victim. If none is found, then set victimSize to 0 and don’t look for victim next time.

If you understand popHead, the popTail method is very similar to it.

popTail simply removes an element from the end of the queue and returns false if the queue is empty, but note that this popTail may be called by multiple consumers, so it needs to loop through CAS to get the object; in the poolDequeue ring list tail has data, so it doesn’t need to be like popHead where head--. .

Finally, the slot needs to be empty.

You can review the code against the diagram again. 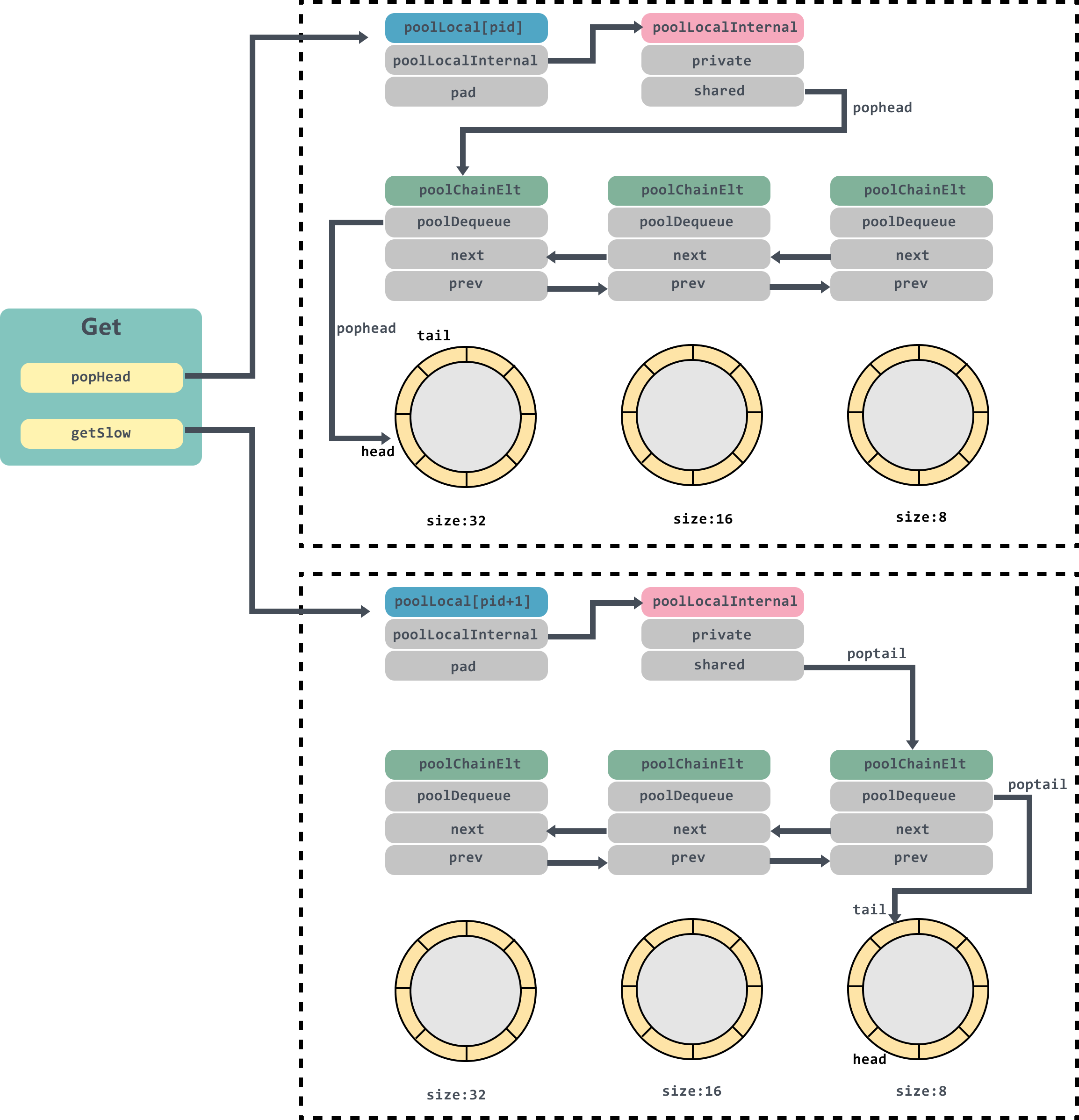 After looking at the Get method, it’s much easier to look at the Put method. Again the Put method first goes to Pin the current goroutine and P, and then tries to assign x to the private field. If private is not empty, then pushHead is called to put it into the shared queue.

If the head node is empty, then a new poolChainElt object needs to be created as the head node, of size 8; then pushHead is called to put it into the ring queue.

if placement fails, then create a poolChainElt node and double the length of the double-ended queue, which of course cannot exceed dequeueLimit, i.e. 2 to the 30th power.

Then bind the new nodes d2 and d to each other and set d2 to the value of the head node and push the incoming object into d2; the

First determine if the queue is full by bitwise operation, that is, add len(d.vals) to the tail pointer, because head points to the position that will be filled, so the head and tail positions are separated by len(d.vals), and then take the lower 31 bits to see if it is equal to head. If the queue is full, return false directly.

then find the slot slot of head, and determine whether typ is empty, because popTail is set val first, and then set typ to nil, so if there is a conflict, then return directly.

finally set the value slot and return the head plus 1.

In the init function of the pool.go file, the function of how to clean up the Pool when GC occurs is registered.

poolCleanup will be called during the STW phase. The main purpose is to swap local and victim, then instead of GC emptying all the Pools, it will take two GC cycles to be released. If the rate of sync.Pool acquisition and release is stable, then no new pool objects will be allocated.

When we are in the later stages of project development, if we find that the GC time consumption is very high, there are a large number of temporary objects may wish to consider using Pool.

For example, we find that the number of goroutines in the current system is very large, and since the initial stack of a goroutine is 2048 bytes, it is very time-consuming to run hundreds of thousands of goroutines on a server; at this time, we can consider using Worker Pool to reduce the use of goroutines.