Prior to 1.14 of Go, preemptive scheduling was collaborative and required self-initiated ceding of execution, but this could not handle edge cases that could not be preempted. Some of these problems were not solved until 1.14 by signal-based preemptive scheduling, such as for loops or garbage collection of long-running threads.

Here is an example to verify the difference in preemption between 1.14 and 1.13.

This example traces the calls made during execution via go trace. Specify runtime.GOMAXPROCS(1) in the code to set the maximum number of CPU cores that can be used simultaneously to 1, using only one P (processor), thus ensuring a single-processor scenario. Then a for loop is called to open 10 goroutines to execute the func function, which is a purely computational and time-consuming function that prevents the goroutines from being idle and giving way to execution.

Here we compile the program and analyze the trace output.

Then we get the trace.output file and visualize it.

From this figure above, we can see that.

As you can see from the trace analysis above, Go’s collaborative scheduling does nothing for the calcSum function; once execution starts, you have to wait for it to finish. Each goroutine takes as long as 0.23s and cannot seize its execution rights.

As you can see from the trace analysis above, Go’s collaborative scheduling does nothing for the calcSum function; once execution starts, you have to wait for it to finish. Each goroutine takes 0.23s, and it can’t seize its execution. 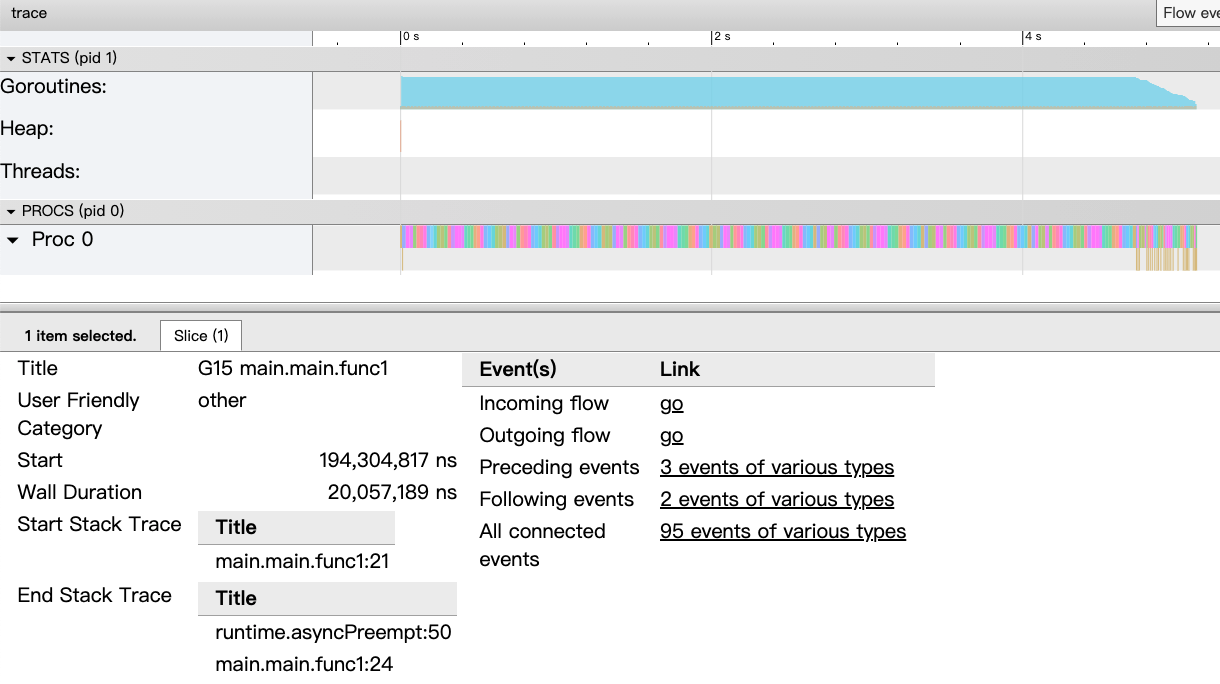 After Go 1.14, signal-based preemptive scheduling was introduced. From the above diagram, you can see that the Proc0 column is densely packed with calls to goroutines when switching, and there is no longer a situation where goroutines can only wait for execution to end once execution starts.

The above run time is about 4s this case can be ignored, because I am running on two machines with different configurations (mainly because I am too much trouble to find two identical machines).

Let’s take a closer look at the breakdown. 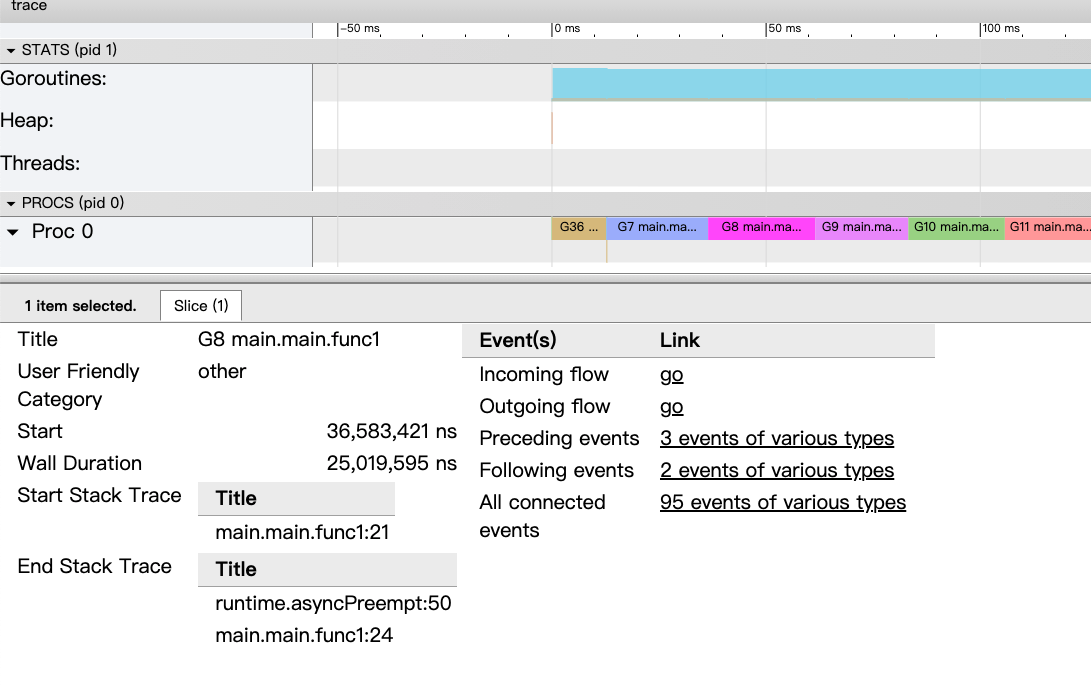 This breakdown shows that

The initsig function iterates through all the semaphores and then calls the setsig function to register them. We can look at the global variable sigtable to see what information is available.

The specific meaning of the signals can be found in this introduction: Unix Signals

Note that the preemption signal here is _SigNotify + _SigIgn as follows.

Let’s look at the setsig function, which is inside the runtime/os_linux.go file.

Note here that when fn equals sighandler, the function called is replaced with sigtramp. The sigaction function calls the system call functions sys_signal as well as sys_rt_sigaction to implement installation signals under Linux.

The above analysis shows that when fn is equal to sighandler, the function called will be replaced with sigtramp, which is an assembly implementation, as we see below.

The sighandler method does a lot of other signal handling inside, we only care about the preemption part of the code, where the preemption will eventually be performed through the doSigPreempt method.

function handles the preempt signal, gets the current SP and PC registers and calls ctxt.pushCall to modify them, and calls the asyncPreempt function in runtime/preempt.go.

This function will get the current G and determine the preemptStop value of the G. The preemptStop will mark the _Grunning state of the Goroutine as preemptable when the suspendG function of runtime/preempt.go is called gp.preemptStop = true, indicating that the G can be preempted.

Let’s look at the preemptPark function in runtime/proc.go, which is called to execute the preempt task.

preemptPark modifies the status of the current Goroutine to _Gpreempted, calls dropg to let out the thread, and finally calls the schedule function to continue the task loop scheduling of the other Goroutines.

The gopreempt_m method is more of an active cession than a preemption, and then rejoins the execution queue to wait for scheduling.

Preemption signaling is performed by preemptM.

preemptM This function calls signalM to send the _SIGURG signal installed at initialization to the specified M.

The main places where preemptM is used to send preemption signals are as follows.

System Monitor runtime.sysmon calls runtime.retake in a loop to seize a processor that is running or in a system call, and this function traverses the global processor at runtime.

The main reason for system monitoring by preemption in a loop is to avoid starvation caused by G taking up M for too long.

This process will get the current state of P. If it is in _Prunning or _Psyscall state, and 10ms have passed since the last trigger time, then preemptone will be called to send the preemption signal. preemptone has been discussed above, so we will not repeat it here. 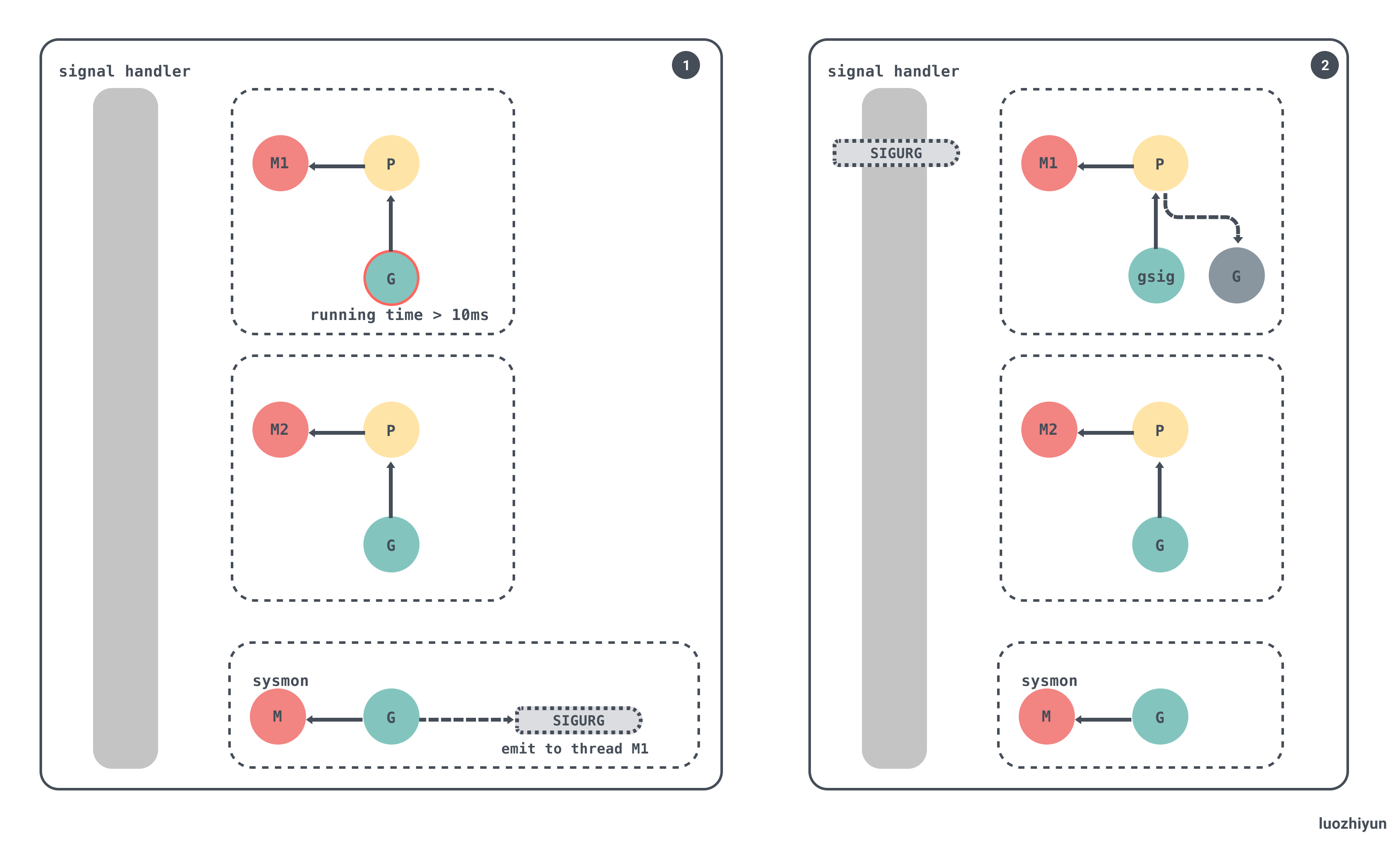 call handoffp to give up access to the processor

This process determines if the state of P is in the _Psyscall state, a judgment is made, and if one is not satisfied, handoffp is called to give up the use of P:

Go scans the stack of G when marking the GC Root at GC time, and calls suspendG to suspend the execution of G before scanning, and then calls resumeG again to resume execution after scanning.

This function is in: runtime/mgcmark.go :

markroot switches to G0 before scanning the stack and then calls suspendG to determine the running state of G. If the G is running _Grunning, then it sets preemptStop to true and sends a preempt signal.

This function is in: runtime/preempt.go :

For the suspendG function I only truncated the processing of G in the _Grunning state. This state sets preemptStop to true, and is the only place where it is set to true. preemptStop is related to the execution of the preempt signal, so if you forgot, you can go to the asyncPreempt2 function above.

Go GC STW is executed with the stopTheWorldWithSema function, which is in runtime/proc.go :

The stopTheWorldWithSema function will call preemptall to send preemption signals to all P’s.

The file location of the preemptall function is in runtime/proc.go :

The preemptone called by preemptall takes the executing G in M corresponding to P and marks it as being preempted; finally it calls preemptM to send a preempt signal to M.

The file location of this function is in runtime/proc.go : 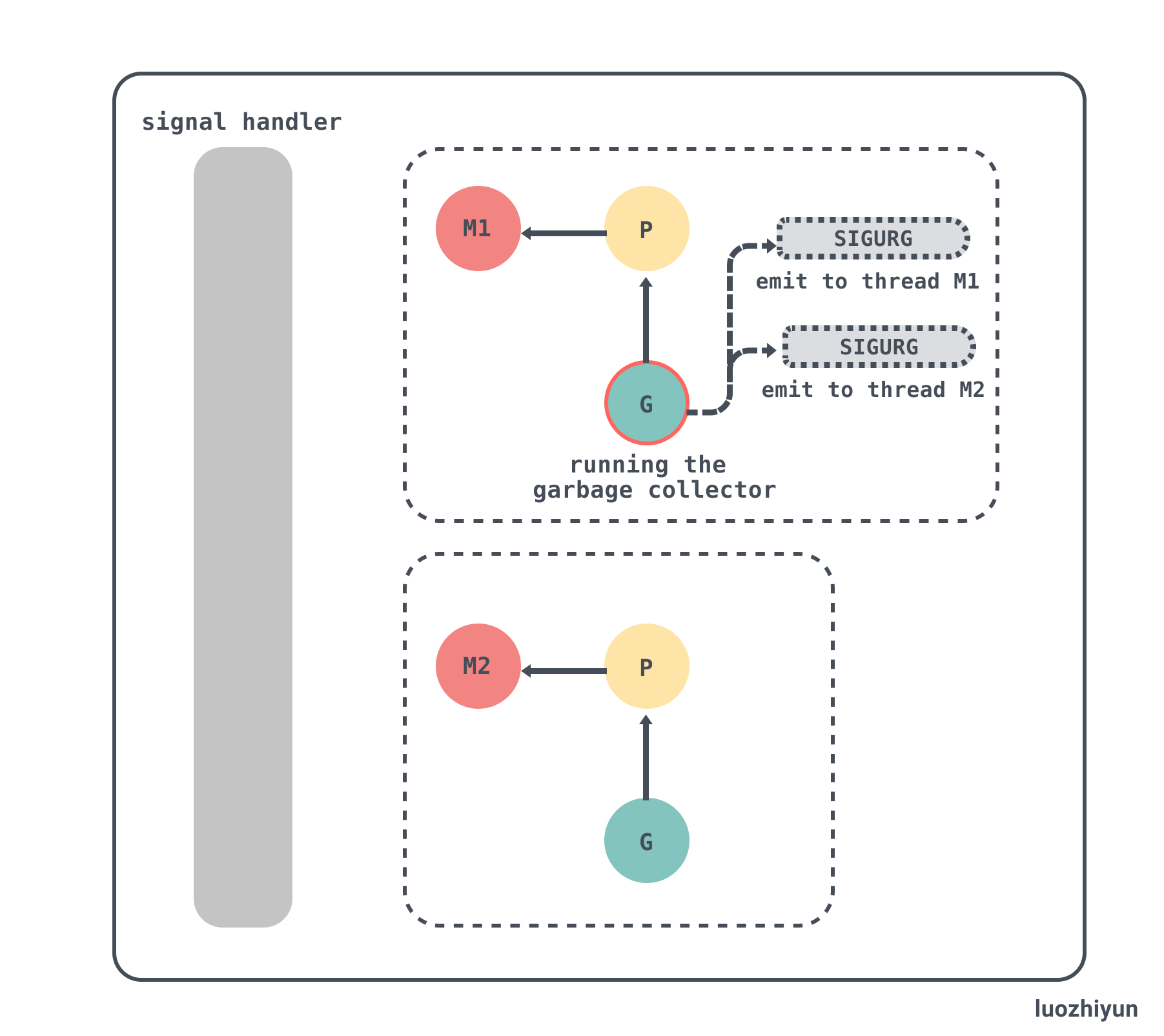 Up to this point, we have taken a complete look at the signal-based preemption scheduling process. To summarize the specific logic.