Recently I had a requirement at work, which simply means that millions of timer tasks will be created in a short period of time, and the corresponding amounts will be added up when they are created to prevent overselling, and the data will need to be checked again after half an hour, and if the data does not match, the added amount will need to be subtracted back.

This is a low performance task if done with Go’s built-in Timer, which uses a minimal heap and has a time complexity of O(log n) for both creation and deletion. The performance is much better if you use the time wheel, which is O(1).

The use of the Timer wheel is actually very widespread, with components such as Netty, Akka, Quartz, ZooKeeper, Kafka and many others.

The following diagram shows a time wheel with tickMs of 1s and wheelSize equal to 10, each cell contains a chain of timed tasks, and the chain contains the real task items.

If the current pointer currentTime points to 2, then if a 9s task is inserted, the new task will take the original time grid chain and will be stored in time grid 1.

The time wheels described here are simple time wheels, with one layer and an overall time range between currentTime and currentTime+interval. If you now have a 15s timed task you need to reopen a time wheel and set a time wheel with a time span of at least 15s to be sufficient. But there is no bottom line to this expansion, if a 10,000 second time wheel is needed, then an array of this size is needed to store it, which not only takes up a lot of memory space, but also makes it less efficient to traverse such a large array.

This is why the concept of a hierarchical time wheel was introduced.

If a 15s task is added to this time wheel, then when the first time wheel cannot accommodate it, it enters the second time wheel and is inserted into the time frame with an expiry time of [10, 19].

As time passes, when there are 5s left in the original 15s task, there is a time wheel demotion operation here, at which point the overall time span of the first level time wheel is sufficient and this task is added to the time frame with an expiry time of 5 in the first level time wheel, after which another 5s are experienced before this task actually expires and the corresponding expiry operation is finally executed.

tick, wheelSize, interval, currentTime are all relatively well understood, the buckets field represents a list of time frames, queue is a delayed queue through which all tasks are triggered, and overflowWheel is a reference to the upper level time wheel.

The bucket actually encapsulates the task queue inside the time frame, which puts in tasks with the same expiry time, and the queue timers will be taken out for processing after expiry. An interesting point here is that since there will be multiple threads accessing the bucket concurrently, the atomic class is needed to get the int64 bit value, and 64 bit alignment is needed to ensure consistency in reading 64 bit data on 32 bit systems.

Timer is the smallest execution unit of the time wheel and is a wrapper around a timed task that will call task to execute the task when it expires.

For example, now initialise a time wheel with a tick of 1s and a wheelSize of 10.

The initialisation is very simple, you can just look at the code comments above.

Here we look at the start method.

This method will start a goroutines to execute the incoming function asynchronously, you can see the source code at the link above.

The advanceClock method advances the time wheel by setting the currentTime from the due time.

The Flush method iterates through the list of timers in the bucket and inserts it into the ts array, then calls the reinsert method, in this case the addOrRun method.

addOrRun will call the add method to check if the incoming timer has expired, and if so, call the task method asynchronously to execute it directly. add method will be analysed below.

The entire start execution flow is shown in the diagram. 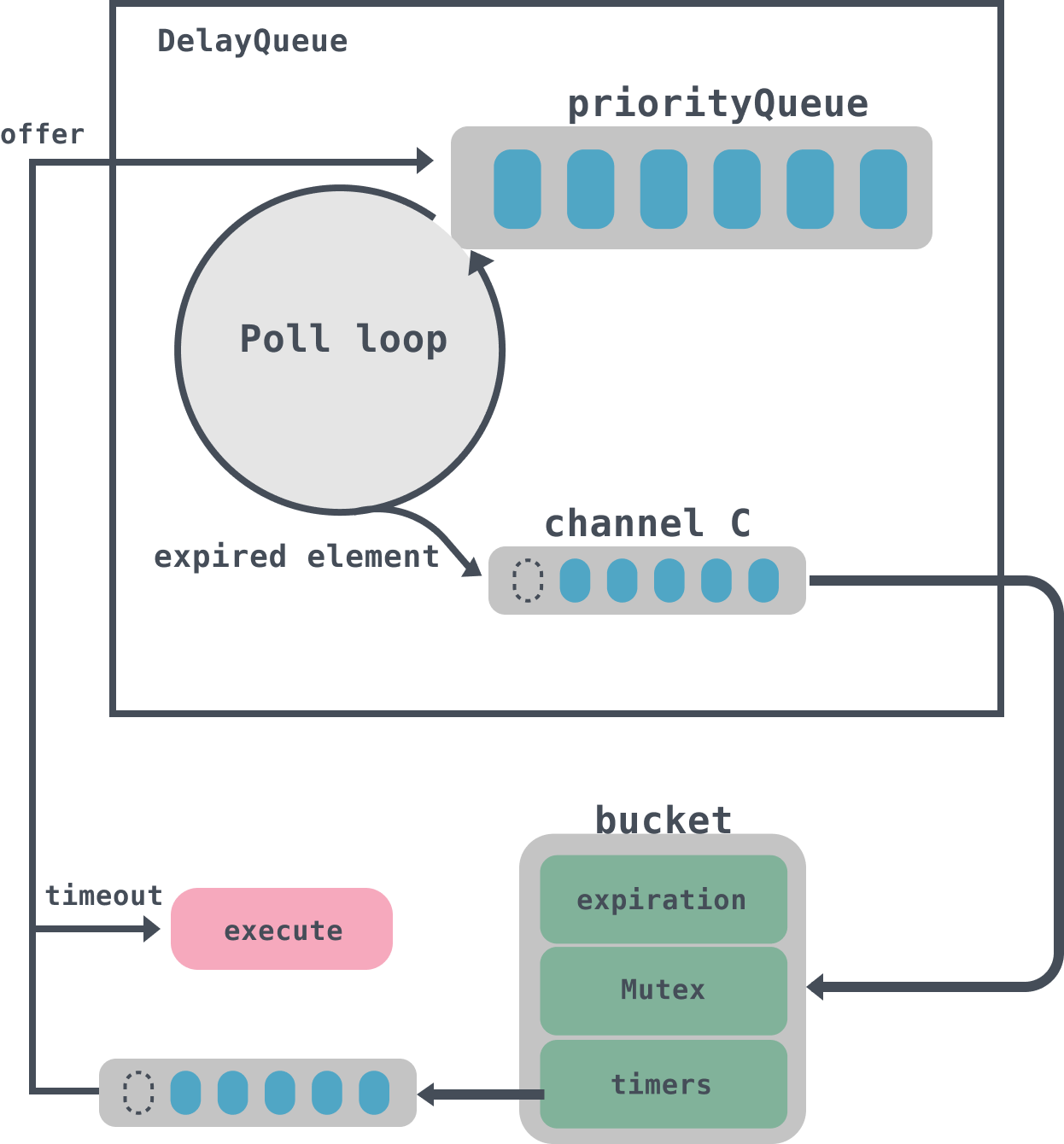 We add a 15s timed task via the AfterFunc method and if it expires then execute the function passed in.

Let’s look at the add method.

add method is divided into three parts according to the expiration time, the first part is less than the current time + tick, indicating that it has expired, then return false to execute the task can be.

The second part of the judgment will be based on whether the expiration is less than the span of the time wheel, if it is less than that, it means that the timed task can be put into the current time wheel, find the time frame corresponding to the buckets by taking the mode and put it into the bucket queue, the SetExpiration method will determine whether the delay queue has already been executed according to the parameters passed in, to prevent repeated insertion.

By now the time wheel is finished, but there are still things to note, we used the DelayQueue plus the ring queue in the implementation of the time wheel with the above time wheel. The TimingWheel time complexity is O(1) for the insertion and deletion operations of timed task items, and the queue in the DelayQueue uses a priority queue with a time complexity of O(log n), but since the buckets list is actually very small, this does not affect performance.