When we think of “scheduling”, the first thing that comes to mind is the scheduling of processes and threads by the operating system. The operating system scheduler schedules multiple threads on the system to run on the physical CPU according to a certain algorithm. Although threads are relatively lightweight, they do have a large additional overhead when scheduling. Each thread takes up more than 1M of memory space, and the system needs to be asked for resources to switch between threads and restore the contents of registers.

The Go language’s Goroutine can be seen as a layer of abstraction over threads, which is much more lightweight and reduces the extra overhead of context switching, and the Goroutine takes up fewer resources. For example, the stack memory consumption for creating a Goroutine is 2 KB, whereas a thread takes up more than 1M. Goroutine switching costs are also much smaller than threads.

P : represents a virtual Processor that maintains a local Goroutine runnable G queue, with worker threads giving priority to their own local run queue and accessing the global run queue only when necessary, which greatly reduces lock conflicts and improves concurrency for worker threads. For each G to actually run, it first needs to be assigned a P.

In addition to the three structures above, there is a container for all Runnable runnable Goroutines, schedt. There is only one instance object of the schedt structure in each Go program, and it is a shared global variable in the code that each worker thread can access, along with the Goroutine run queue that it owns.

The following is the relationship between G, P, M and the global queue in schedt. 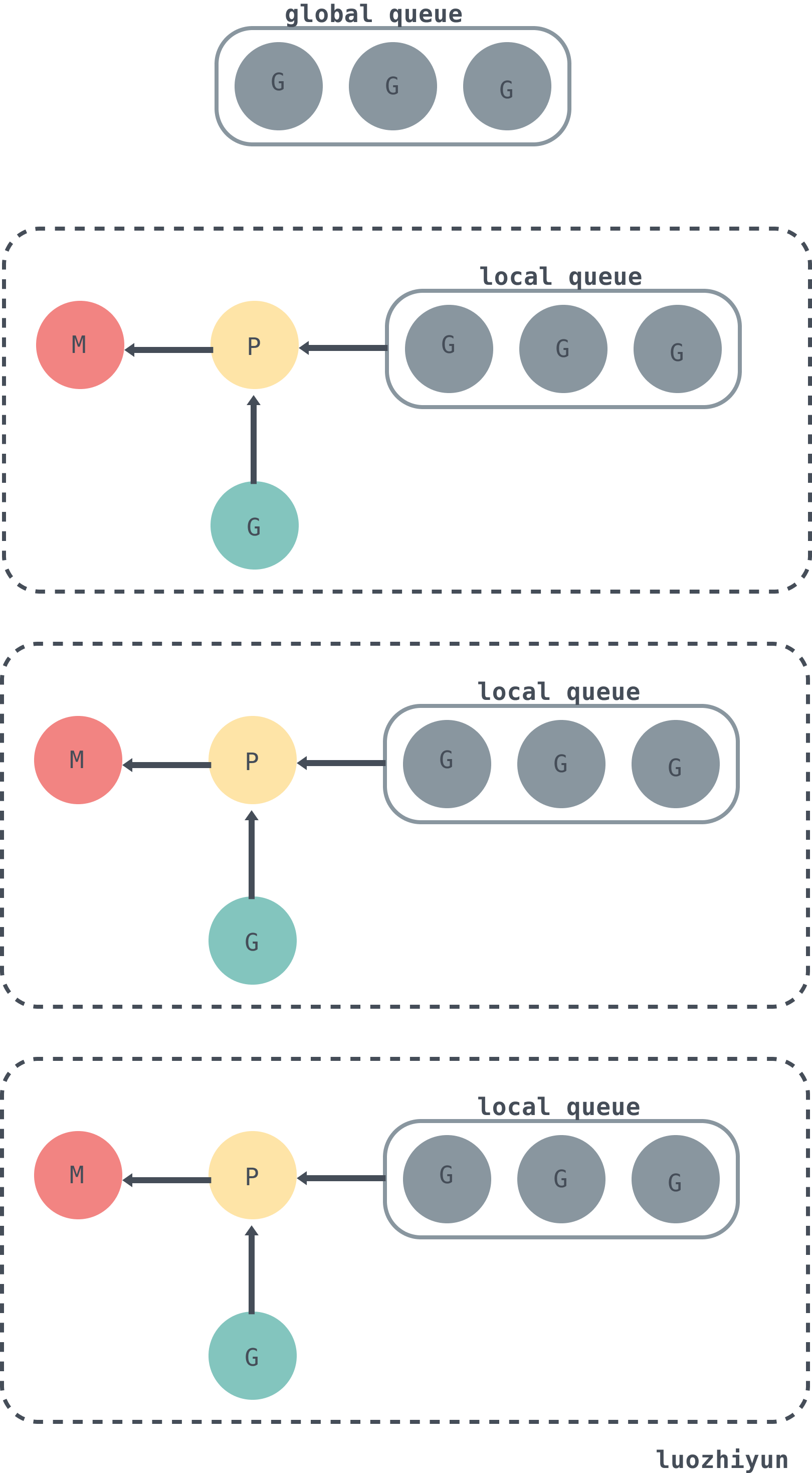 As can be seen from the diagram above, each m is bound to a P. Each P has a private local Goroutine queue, and the thread corresponding to the m gets the Goroutine from the local and global Goroutine queues and runs it, with the green G representing the running G.

By default, the runtime sets GOMAXPROCS to the number of cores on the current machine, assuming a quad-core machine creates four active OS threads, each corresponding to an M in the runtime. 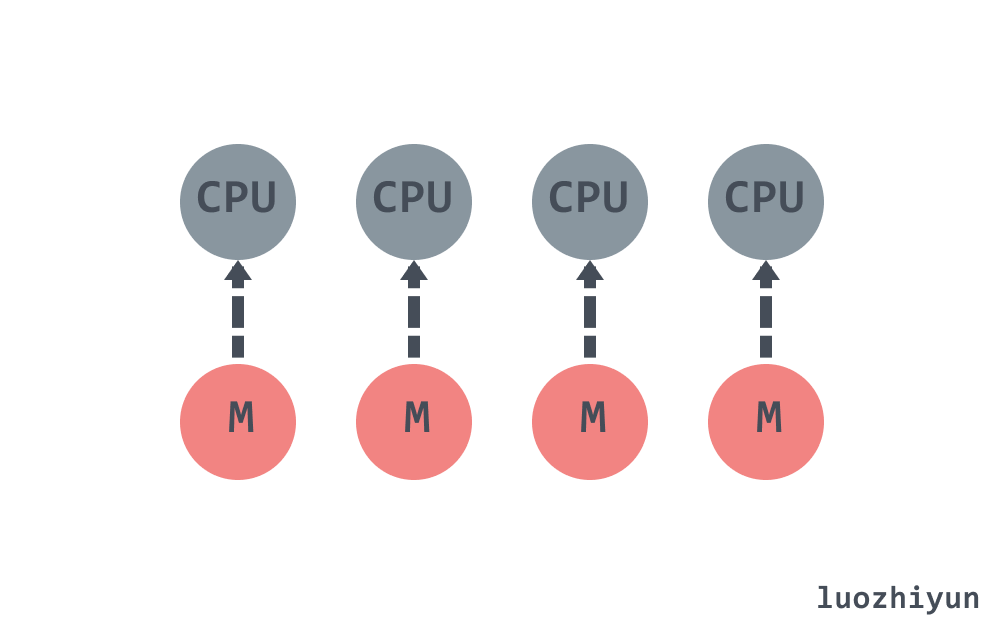 Here’s a look at the gobuf structure, which is mainly used when the scheduler saves or restores contexts.

During execution, G may be in one of the following states.

The above states look like a lot, but in reality it is only necessary to focus on the following.

M in the Go language concurrency model is the operating system thread, and there will be at most GOMAXPROCS active threads that can run properly.

The processor P in the scheduler is the intermediate layer between threads M and G, and is used to schedule the execution of G on M.

Here’s a look at a few of the states of P.

sched, as we mentioned above, holds the global resources held by the scheduler, such as the free P-chain table, G’s global queue, etc.

Here again, debugging is done with the help of dlv. Note that the following examples are in Linux.

After running the program, enter the following command as follows.

The above breakpoints show that the startup function for the linux amd64 system is in the runtime-rt0_go function in asm_amd64.s. Of course, different platforms have different program entry points, so you can find out for yourself if you are interested.

Of the CALL methods above.

newproc is responsible for creating execution units that can be scheduled by the runtime based on the main G entry address.

The procresize method is executed as follows.

Here some P field values are initialised, such as set id, status, sudogcache, mcache, lock related. The initialised sudogcache field stores the set of sudogs associated with the Channel. The corresponding mcache is stored in each P, allowing for quick allocation of micro-objects and small objects.

This is a very simple method, so I won’t explain it. Here’s another look at runtime.pidleput putting P into the free list.

You can tell from the assembly that runtime-schedinit is executed after the execution of runtime.newproc which is the entry point for creating G.

runtime.newproc gets the current G and the caller’s program counter, then calls newproc1 to get the new G structure; it then puts the G into the runnext field of P.

The newproc1 function is rather long, so here is a summary of the main things it does.

Here’s how runtime.gfget looks up G.

When newproc has finished running newproc1 it calls runtime.runqput to put G into the run list.

We continue back in runtime-rt0_go, where runtime-mstart is called to start scheduling G after the initialization work is done.

runtime-mstart will be called to runtime-mstart1 which will initialize M0 and call runtime.schedule to enter the scheduling loop.

In this function, we are only concerned with the scheduling-related code. From the above code we can see that the main directions to find available G are as follows.

The task stealing method findrunnable is very complex, 300 lines long, so let’s take our time and analyse it.

Here we look at what findrunnable does.

schedule has run to this point to indicate that it has finally found a G that it can run.

When execution of execute begins, G is switched to the _Grunning state and M is bound to G. Eventually, runtime.gogo is called to start execution.

goexit0 resets G, unties M from G, and puts it in the gfree table to wait for other go statements to create a new g. At the end, goexit0 re-calls schedule to trigger a new round of scheduling.

The following is a diagram that roughly summarizes the scheduling process. 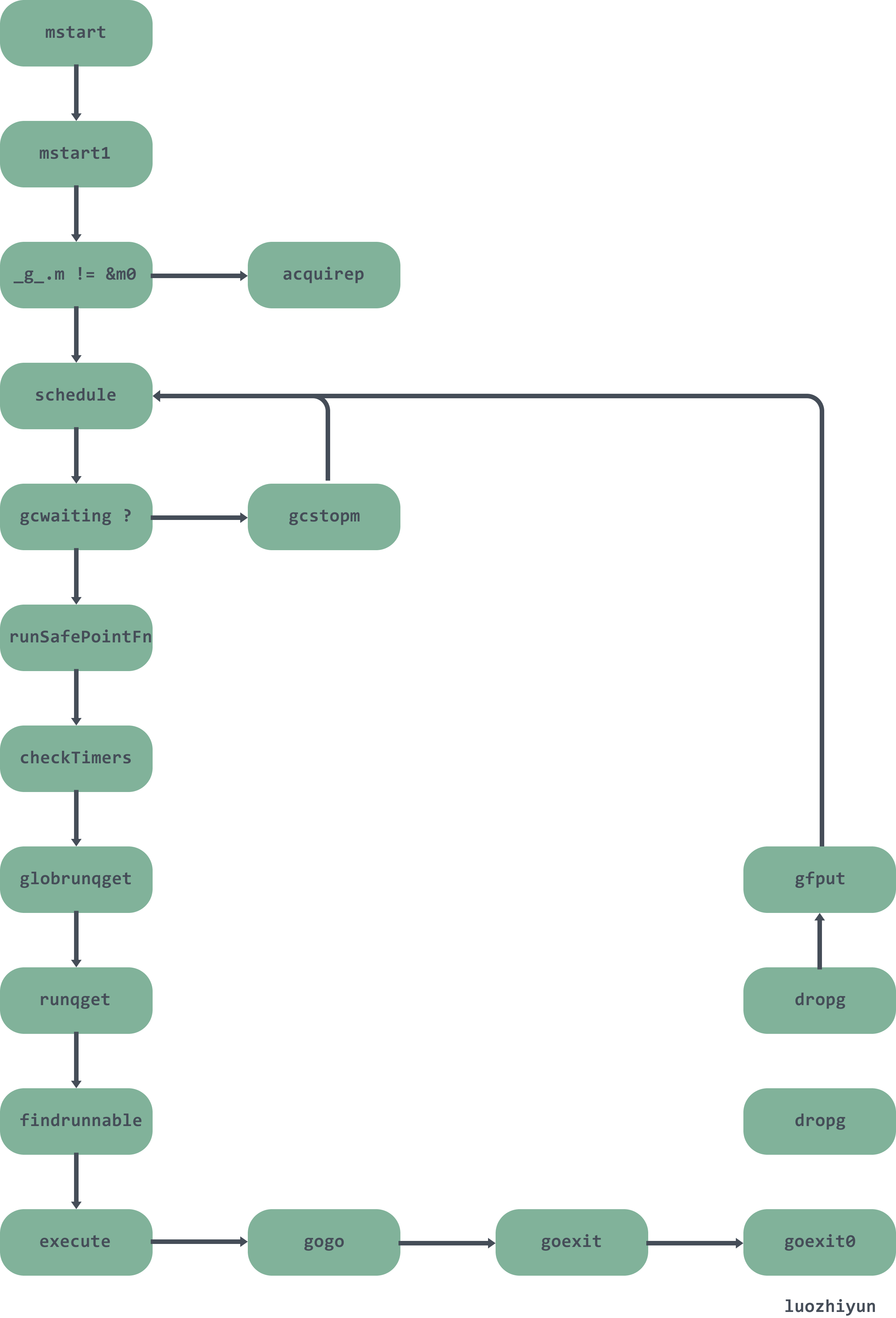