Recently we have been doing a technical selection of databases and inevitably we need to do a benchmark test of the databases so that we can compare the performance of different databases across the board.

As a go developer, we used the Go YCSB developed by pingcap for benchmarking purposes.

First make sure your local Go version is not lower than 1.16, then download and compile.

In the bin folder is our compiled program go-ycsb.

So we can test the system in multiple dimensions according to different workloads, which include the following operations

When testing, we also need to simulate the test according to different business scenarios, which can be controlled by requestdistribution.

Here we look at what parameters can be filled in the workload.

For example, we now want to test the performance of redis by first writing a workload.

The above workload means that 1 million rows of data are inserted into the library when it is loaded, and the amount of data manipulated is also 1 million, but there are 50 threads, i.e. each thread actually manipulates 20,000 rows of records.

The test uses readmodifywriteproportion, which reads before it writes, and operates on the records in a uniform, or random, way.

Then run the test.

For me, of course, it is important to look at the code and learn how others have written it to help us in our work.

For the Go YCSB, it has a few components.

Let’s take a look at redis as an example of what to do if you want to test your own Database.

In Go YCSB, all the DBs are placed under the db directory. 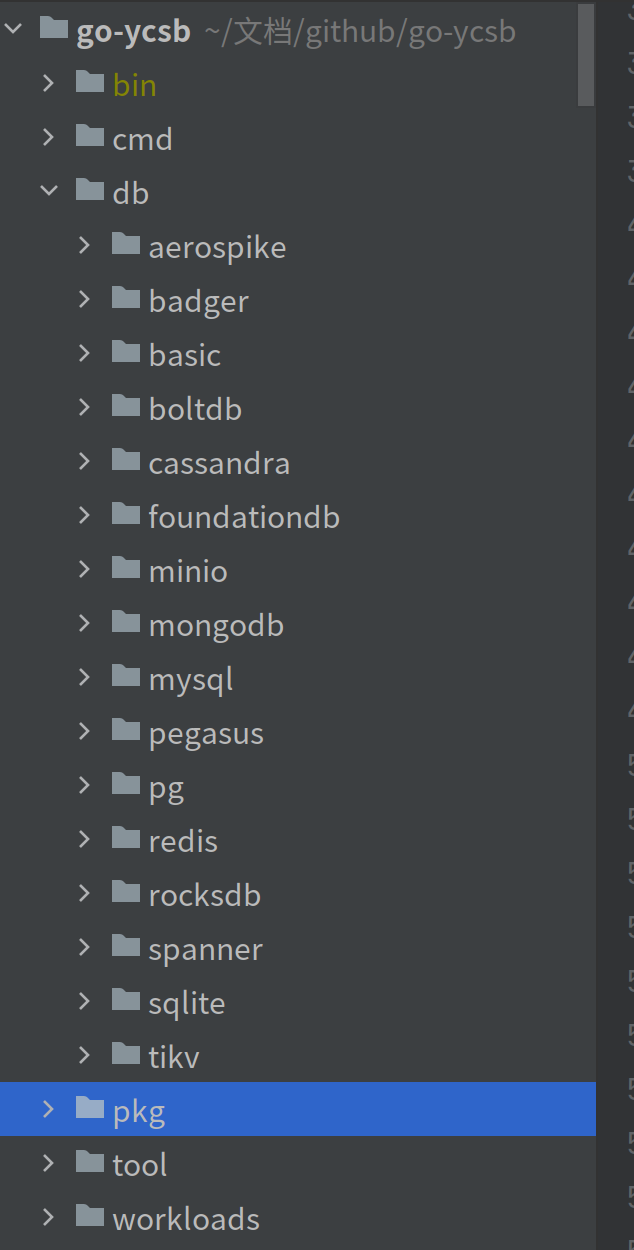 So, we can create our own db under this folder and construct a struct that implements the DB interface.

Inside, specific DB operations are defined.

Then a factory needs to be defined to create this DB struct, implementing the DBCreator interface.

Then an init function needs to be defined to register the DBCreator when it is started.

RegisterDBCreator is called at initialization time to get the DB registered by the init method. In this way Go YCSB implements the customisation of the DB.

First Go YCSB uses cobra at runtime to execute two different methods depending on whether load or run is passed in.

This is where the runClientCommandFunc function will be called.

The initialisation of the parameters is mainly done inside initialGlobal.

The main thing here is to create the Workload and DB, which will initialise a lot of information in the configuration file.

The runClientCommandFunc calls the client’s Run method to execute the test.

The second part is to create a thread according to the set threadcount and run the worker to run the test; the newWorker will set the totalOpCount according to the operationcount to indicate the total number of executions required, and use totalOpCount / int64(threadCount) to set the opCount to indicate the number of records for a single thread operation.

The execution of the benchmark test is left to the DoTransaction method of the workload to determine the execution.

Here the Next method of the operationChooser is called to determine which instruction to execute, the probability of execution being set in the configuration file.

The implementation of the code is to add up all the values as described above to get sum, and then calculate whether each value accounts for a random value.

Here we first call nextKeyNum to get the key value, which will be obtained according to certain rules based on the requestdistribution parameter we set. Then, after checking which fields need to be read, the Read method of the DbWrapper is called to read the data.

The DbWrapper wraps a layer and uses the defer method to call measure for statistics.

However, the problem I have here is that when reading the data, it is also parsed according to the fields passed in, which also loses some performance, I don’t know if this makes sense, like the Read method of redis.

The measure method is called after each operation and the test data is counted.

Statistics need to be manipulated in a thread-safe manner as there are multiple threads operating simultaneously.

The maximum and minimum delays are manipulated by CAS, also for thread safety.

After the count, getInfo is called to calculate the elapsed time.

The per99, per999, per9999 here are actually only milliseconds in precision and are designed to do histogram export (and then the author has been at this project for 3 years and hasn’t added this feature yet).

The above analysis shows that Go YCSB is very well designed and can be extended with very little code; the configuration is also quite flexible, providing different test environments for different requestdistributions, and the read and write probabilities can be adjusted at will in the tests to ensure that the online environment can be simulated as much as possible.

But it also has a lot of shortcomings, on the one hand, the documentation is very inadequate, basically just write a few parameters configuration; on the other hand is a lot of features are not implemented, online testing will often appear ERROR, go to the code to see the results are not implemented. Three years ago, the author said in his blog that he wanted to implement the test result export function, but the result has not been implemented yet. I have sent an email to the author at tl@pingcap.com and am waiting for a reply.