When I was looking at the TiDB source code recently, I found it very interesting that failpoint is used for fault injection. It uses code generation and code AST tree parsing and replacement to implement failpoint, I will also try to parse it to learn how to parse the AST tree to generate code.

I will also try to parse it and learn how to parse the AST tree to generate code. So this article will mainly look at the use of failpoint in detail and how it is implemented.

failpoint is a tool for injecting errors during testing, it is a Golang implementation of FreeBSD Failpoints. Usually we have various test scenarios to improve the stability of our system, but some scenarios are very difficult to simulate, e.g. random delays in a service or unavailability of a service in microservices; simulating scenarios of unstable player networks, dropped frames, excessive latency, etc. in game development.

So in order to test for these problems easily, failpoint was developed, which greatly simplifies our testing process and helps us to simulate various errors in various scenarios so that we can debug code bugs.

The main advantages for failpoint are.

First we need to build using the source code.

The failpoint can then be used inside the code to inject faults.

We can see this when we go to the Inject method.

When failpoint is not enabled, it is just an empty implementation and does not have any impact on the performance of our business logic. When our service code is compiled and built, this piece of code is optimized inline, which is the zero cost fault injection principle implemented by failpoint.

Here we convert all the above test functions into usable fault injection code.

Call the compiled failpoint-ctl to rewrite the current code for conversion.

Below we perform the injection on the code.

In the above example 2 means that the injection will only be performed twice, and the argument in return("abc") corresponds to the v variable obtained in the injection function.

In addition to this we can set the probability of it taking effect.

The 5% in the above use case means that only 5% of the validity returns abc.

In addition to the simple example above, it can be used to generate more complex scenarios.

In this example, failpoint.Break, failpoint.Goto, failpoint.Continue and failpoint.Label are used to implement the code jumps and the final generated code.

You can see that our failpoint code above is translated into the jump keyword in Go.

After testing, we can finally revert the code by disable.

Additional usage can be found in the official documentation at

When using failpoint we build our failure track using a series of Marker functions that it provides.

This is then converted by failpoint-ctl to build an AST replacing marker stmt, which is converted to the final injector code as shown below.

The failpoint-ctl conversion generates a binding__failpoint_binding__.go file with a _curpkg_ function to get the current package name, in addition to replacing the code content.

Getting the code AST tree

When we call failpoint-ctl for code conversion, we rewrite the code using Rewriter, a tool structure that detects Marker functions and rewrites them by traversing the code AST tree.

The execution of failpoint-ctl will call the RewriteFile method for code rewriting.

This method first calls the Go-provided parser.ParseFile method to get the AST tree of the file, which uses a tree structure to represent the syntactic structure of the source code, with each node of the tree representing a structure in the source code. The AST tree is then traversed through the top declaration Decls slice, which is equivalent to traversing down from the top of the tree, a depth-first traversal.

After the traversal is complete, the entire file is rewritten by checking the binding__failpoint_binding__ file and calling format.Node after the source file has been backed up.

Here all functions are traversed in turn until the failpoint Marker declaration is found, and then the corresponding Rewriter is retrieved in exprRewriters by Marker name.

Our example above uses failpoint.Inject, so it is explained here using rewriteInject.

This method will eventually convert:

Here’s how the AST tree is constructed

The comments above should be very detailed, so you can follow the comments to see the code.

Let’s say we have a 5% chance of this failure being triggered, then we could do this.

The contents of the GO_FAILPOINTS variable declared above will be read at initialisation time and the corresponding mechanism will be registered and fault controlled at execution time according to the registered mechanism.

Enable will finally be called in the Enable method of the Failpoints structure.

Enable will parse main/testValue=5%return("abc") into the reg map as a key-value, and the value will be parsed into the Failpoint structure.

The fault control scheme in the Failpoint structure is mainly stored in the term structure.

We have used return above to enforce the fault, in addition to 6 others.

The hierarchy of the entire Filpoint is as follows. 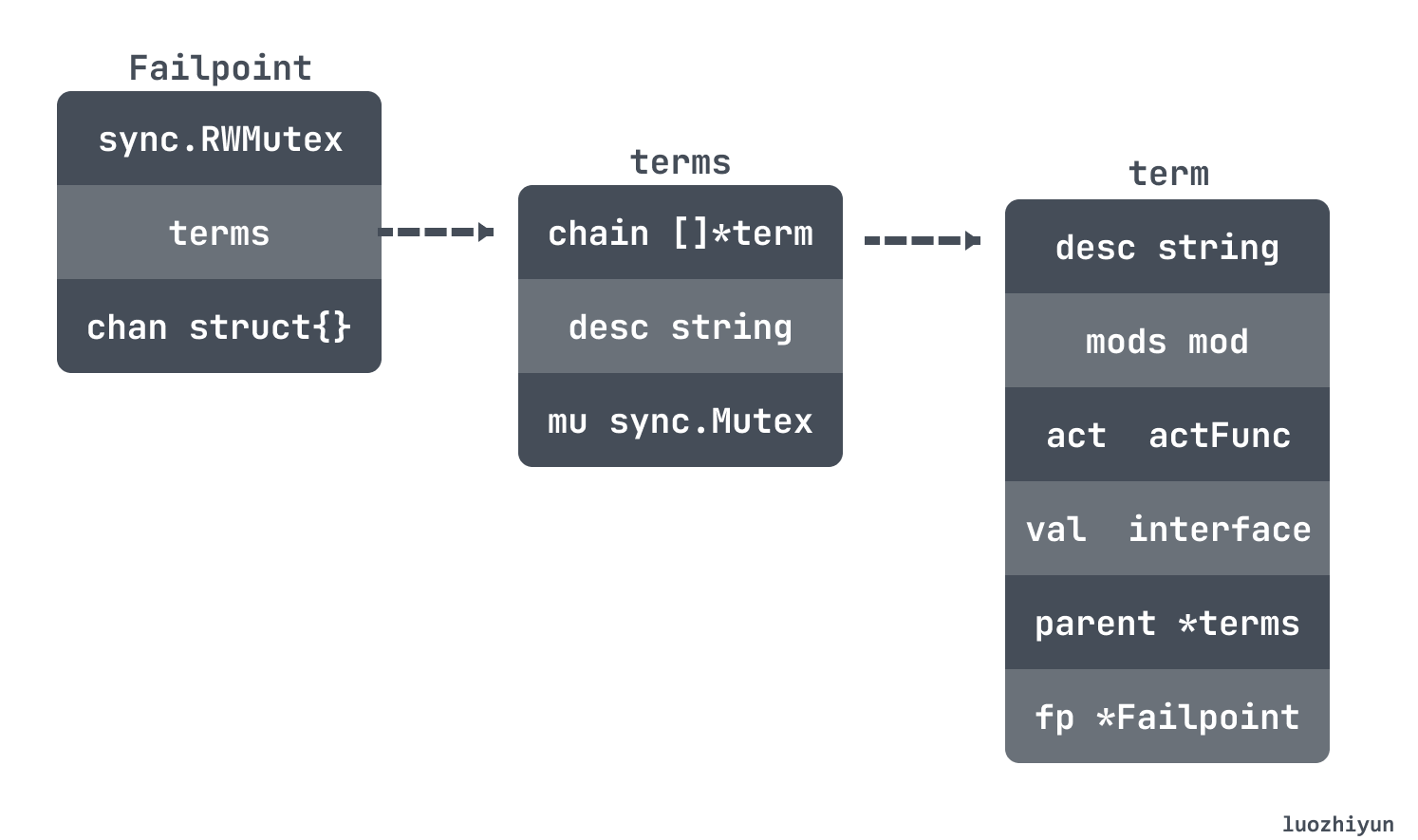 Here we look at Enable

Eval` is executed when we run the fault code, and then determines whether the fault function will be executed based on whether err is returned.

The Eval function will call the Eval method of the Failpoints.

The reg map called in the Eval method is the scheme registered in the init function we mentioned above, and its Eval method will be called when the Failpoint is retrieved

The Eval method calls the eval method of terms to iterate through the chain []*term field, get the scheme set in it and call the allow method to check if it passes, then call the do method to perform the corresponding action.

In the above introduction we first learned how to use Failpoint to serve our code, and then how Failpoint can be used to implement fault injection by way of code injection. This included Go’s AST tree traversal modifications, as well as code generation, and also provided an idea of how we can provide some additional functionality in our own code when writing it in this way.