When you type tar -zcf src.tar.gz src, you can package all the files under src into a tar.gz format. Here “tar” is the archive format, which combines multiple files into a single file, and “gz” refers to the gzip compression format, which uses the DEFLATE algorithm to compress. As the most widely used lossless compression algorithm, how does DEFLATE work and what are the principles behind it? In this article, we will discuss this issue.

DEFLATE combines the LZ77 algorithm with Huffman coding, designed by Phil Katz and standardized by RFC1951. This paper is a summary of my research on RFC1951 and zlib, introducing first the LZ77 algorithm, then the role of Huffman encoding in DEFLATE, and finally the Finally, we introduce the format of gzip.

J. Ziv and A. Lempel published a paper in 1977 called A Universal Algorithm for Sequential Data Compression, which proposed a universal algorithm for compressing sequential data. This algorithm became known as the LZ77 algorithm. In fact, the DEFLATE algorithm uses a different version of LZ77 than the original, so here we use the one in DEFLATE.

The LZ77 compression algorithm takes advantage of the fact that there are always a lot of duplicates in the files we use. It tries to find as many duplicates as possible in the file, and then replaces them with a marker that clearly indicates where they occur. As an example, take the first paragraph of the Gettysburg Address:

Four score and seven years ago our fathers brought forth, on this continent, a new nation, conceived in Liberty, and dedicated to the proposition that all men are created equal.

We can find quite a few duplicate fragments. We specify that whenever more than two characters are duplicated, the duplicate token <d,l> is used in its place. <d,l> means that the string at this position is equivalent to a string of length l before the d character. So the above can be expressed as:

Well, you may have noticed that the result of this “compression” is even longer than the original. Don’t worry, this is just a demonstration, and we’ll see how to solve this problem later.

The simplest way to implement this algorithm is to iterate through the string, looking for duplicates in the preceding order for each character, and then finding the longest duplicate substring. This approach has a time complexity of $\mathrm{O}(n^2)$, which is inefficient, especially when working with large files. To improve efficiency, we use hash table and sliding window optimization.

Sequential lookups are too slow, so we can use a hash table to improve efficiency. We use a hash table to map a string of length three to a list of all occurrences of the string. Compression scans the string from beginning to end. Suppose the next three characters are XYZ , first check if the string XYZ is in the hash table. If not, output the character X as is and move it to the next character. Otherwise, compare the string starting from the current position with all the strings starting from the position where XYZ appears, find the longest match of length N and output the duplicate marker, then move N characters backward. Whether or not a match is found in the hash table, the current position is inserted into the list mapped by XYZ in the hash table.

As an example, consider the string abcabcdabcde , the algorithm runs with the following steps:

Even with a hash table, overly long files can still cause efficiency problems. For this reason we use a sliding window, where duplicates are found only in the window. The length of the window is fixed, usually 32KB. In the zlib implementation, a buffer twice the size of the window is used, as shown below:

Initially, the data to be compressed is filled into the buffer, and the pointer is located at the beginning of the buffer; the pointer then scans backwards to compress the data. We call the part scanned by the pointer the search area and the part not scanned the lookahead area. For each scanned character, the algorithm only looks for a match in the search area. When the lookahead area is not long enough (less than a fixed value), the algorithm moves the window to continue scanning for more data. This is done by copying the data from the second half of the buffer to the first half and moving the pointer, then reading in the new data in the second half of the buffer, and then updating the hash table as the location of the data changes.

Sometimes this strategy does not give the best compression result. As an example, consider the string abcbcdabcda, which looks like this when the 6th character is scanned:

The hash table indicates that abc appears at 0, the longest match is abc, so <6,3> is output; the next da has no duplicates and is output as is. The result of the compression is abcbcd<6,3>da . However, a longer match bcda can be found in the preceding text at the 7th character position, and a better compression result would be abcbcda<4,4> .

Inert matching can improve compression, but it can slow down compression. Runtime parameters control inert matching, which is only triggered if the current match is not long enough, i.e., if it is less than a configured value. This value can be adjusted depending on whether compression rate or speed is preferred, or inertia matching can be turned off.

It would be silly if we actually used a format like <d,l> to represent repetitive content. First, it takes up so much space that the Gettysburg Address in section 2.1, which is “compressed” in this way, is longer than even the original text. Secondly, this format turns the brackets into special characters, and you have to escape them somehow. So how do you represent the distance and length of the repeated parts? DEFLATE’s approach is to break the old order and create a new one - to re-encode the data using Huffman encoding.

Huffman encoding was introduced by American computer scientist David A. Huffman in 1952, and is a prefix encoding constructed from the frequency of characters. Unlike our usual fixed-bit encoding (8 bits per character), Huffman encoding may have different bits for each character, but can clearly distinguish each character without any ambiguity.

How is it that each character has a different number of bits but can be clearly distinguished from the others? This is where prefix encoding comes in. To illustrate what prefix coding is, imagine that we are talking on the phone. The length of a phone number varies: there are three-digit numbers, such as 110, 119; five-digit numbers, such as 10086, 10010; 7- or 8-digit landlines, 11-digit mobile numbers, etc. However, the numbers are always correctly identified when dialed in sequence (no need to press the call button for landline off-hook dialing). This is because no phone number starts with 110 except for the police 110, and no landline number can be the prefix of a cell phone number. A phone number is a prefix code. So, although each character in Huffman encoding has a different number of bits, the shorter encoding will not be the prefix of the longer encoding. This ensures that there is no ambiguity in the Huffman encoding.

The construction is very simple. We consider the frequency of characters as priority and put them in a minimum priority queue: 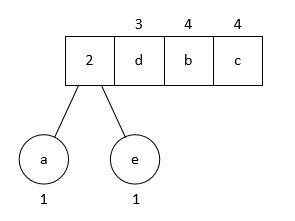 Repeating this operation, we end up with a binary tree. This is the Huffman tree.

Suppose we have the string badbec, and after using Huffman encoding we get 10000011000111. Decoding is also simple, read each bit in turn, use Huffman tree, start from the root node 0 to the left and 1 to the right, and output the corresponding character when it reaches the leaf node, then go back to the root node to continue scanning.

A byte has 8 bits, so we need 256 Huffman encodings from 0 to 255. The frequency of each character in the file is counted, and a Huffman tree is constructed to calculate these 256 codes. How do we represent the distance and length in the repetition mark with Huffman codes? This is how the DEFLATE algorithm does it:

When decompressing, if the code is less than or equal to 255, it is considered a normal character and is output as is; if it is between 257 and 285, it means that a repeat mark is encountered, which means that the current code is the length and the next code is the distance. Decode the length and distance, then find the corresponding part in the decompression buffer and output it; if it is 256, then the compression block is finished. 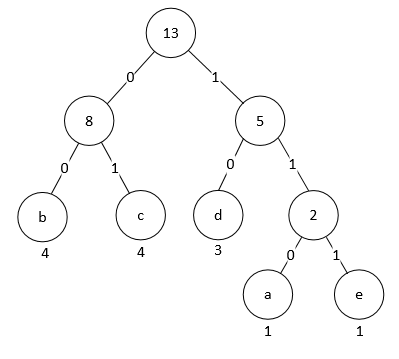 The adjusted Huffman code table is :

The “$\ll$” here means left shift. Thus, we only need to know the Huffman encoding length of each character to derive the Huffman encoding of all characters. For the above example, we just need to store the length sequence $<3, 2, 2, 2, 2, 3>$. When decompressing this sequence, we scan the sequence for the number of codes of each length, and find the minimum value of the codes of each length; codes of the same length are incremented sequentially, so we add one to the other to find the Huffman codes of all characters. In particular, a length of 0 means that the character does not appear in the compressed block and is excluded when constructing the Huffman code.

Length sequences are prone to having consecutive repetitive values; and since there may be many unused characters in the file, there may also be many zeros. Therefore DEFLATE encodes the length sequence as shown below:

The Gzip format consists of a header, a compression body, and a tail. The header contains basic information about the file, the time, the compression method, the operating system, etc. The tail contains the checksum and the original size. This information is not relevant to the compression algorithm, so we will not discuss it in depth here, but you can refer to RFC1952.

The compressed body consists of one or more blocks. Each block is of variable length, and has its own compression and encoding scheme. A block may start or end at any bit, without aligning the bytes. It is important to note that the distance indicated by the repeat marker may span the block.

All blocks start with a 3-bit header and contain the following data:

The uncompressed block contains the following data (immediately after the header):

Static compression blocks are relatively simple, with the header followed by the valid compressed data, and finally a 256 end marker.

The DEFLATE algorithm is a very complex method to compress data as much as possible. Due to time and effort constraints, I have not read the zlib source code carefully, so this article is mainly based on RFC1951, and the implementation details are less discussed. If there are any errors or ambiguities, please feel free to correct them. For those who are interested in the implementation, please refer to the zlib source code.

BTW, there is a simple and efficient implementation of the LZ77 algorithm: ariya/FastLZ. FastLZ does not use Huffman encoding, only LZ77. It compresses text fast and well, but the compression ratio of binary data is not ideal. The FastLZ implementation is relatively simple and is recommended for reading.