Hive, implemented by Facebook and open source, is a data warehouse tool based on Hadoop. It maps structured data into a database table and provides HQL (Hive SQL) queries. The underlying data is stored on HDFS, and Hive essentially converts SQL statements into MapReduce tasks to run, making it easy for users unfamiliar with MapReduce to process and compute structured data on HDFS using HQL, suitable for offline bulk data computation. To be clear, Hive, as a data warehouse application tool, has 3 “no’s” compared to RDBMS (relational database).

In addition, Hive is a more “relaxed” world than RDBMS, for example. 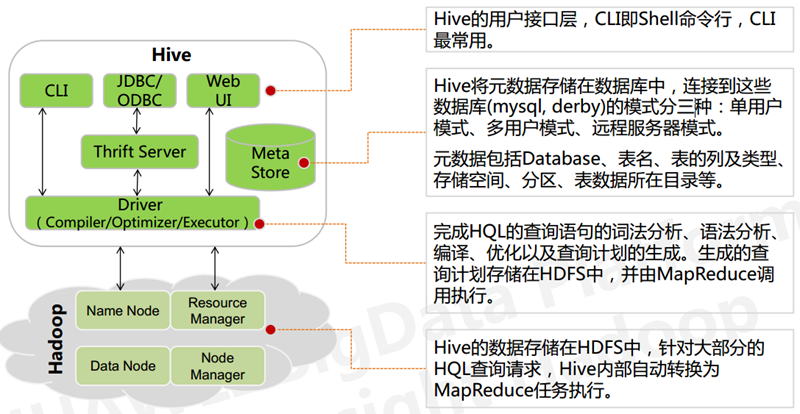 Hive’s storage structure consists of databases, tables, views, partitions and table data. Databases, tables, partitions, etc. all correspond to a directory on HDFS. All data in Hive is stored in HDFS and there is no special data storage format, as Hive is in Schema On Read mode and can support TextFile, SequenceFile, RCFile or custom formats.

Hive does not have a special format for storing data, nor does it create indexes for the data, so you can organise the tables in Hive very freely, simply by telling Hive the column and row separators in the data when you create the table, and Hive can parse the data. Secondly, all the data in Hive is stored in HDFS, which contains the following data models: Table, External Table, Partition, Bucket.

Hive stores metadata in the RDBMS and there are three modes to connect to the database.

decimal usage: Usage: decimal(11,2) represents a maximum of 11 digits, of which the last 2 are decimal and the integer part is 9; if the integer part is more than 9, the field becomes null; if the decimal part is less than 2, it is followed by 0 to make up the two digits, if the decimal part is more than two, the excess is rounded up. You can also write decimal directly without specifying the number of digits, the default is decimal(10,0) 10 integers, no decimals

Hive Select syntax is almost the same as that of Mysql and other RDBMS SQL, the following syntax format is attached, no detailed explanation will be given.

Without the multidimensional aggregation method.

The cube will enumerate all possible combinations of the specified columns as grouping sets, while roolup will generate grouping sets in a hierarchical aggregation manner. e.g.

It says specify, but it’s actually exclude, e.g. (num|uid)? +. + excludes the num and uid columns. Alternatively, where can be used with a regular like this: where A Rlike B, where A Regexp B.

Lateral View (one row to many rows)

Lateral View is used in conjunction with table generation functions such as Split, Explode, etc., which can split a row of data into multiple rows of data and aggregate the split data.

Suppose you have a table pageAds with two columns of data, the first column is the pageid string and the second column is the adid_list, a comma-separated collection of ad IDs. Now you need to count the number of times all the ads appear on all the pages, so you start by using Lateral View + explode to do the normal grouping and aggregation.

Hive has a rich set of window functions, the most common of which is row_number() over(partition by col order col_2), which allows you to sort by a specified group of fields.

CTE syntax and definition of variables

The following is an explanation of the key declarations.

If you do not remember the full table name, you can look it up within the db (database) by using show tables.

The following is an explanation of the key declarative statements.

For example, if a table has five fields a,b,c,d,e, but we only need a and b, then use select a,b from table instead of select * from table

small tables before large tables after

When writing code statements with joins, tables/subqueries with few entries should be placed before the join operator

Because the table to the left of the join operator will be loaded into memory first during the Reduce phase, loading a table with fewer entries can effectively prevent an overflow of memory (OOM). So for the same key, the smaller value is put first and the larger one is put second

Avoid using distinct as much as possible

Try to avoid using distinct for reordering, especially for large tables, which are prone to data skewing (key like in a reduce process). Use group by instead.