Most implementations of coroutines are based on some kind of runtime yield primitive. However, kotlin does not have this kind of lower-level support, and still implements coroutines based on CPS transformations on jvm, which does not have yield instruction support.

It’s actually quite impressive, and I’d like to know how it’s done.

CPS stands for Continuation Passing Style, which is basically code that looks like this.

Convert to this style.

This is also known as “callback hell”, a style that was once popularized in node js. Roughly speaking, the value that should be returned by the function is returned by the callback function in the argument. The word “continuation” is obscure, but it is actually a synonym for “callback”.

The flow is roughly as follows

It is the io loop, the scheduler, that really drives the entire control flow.

The problem with callback functions is that they lack structure, and every asynchronous call necessarily involves an exception handling process, which makes the code unreadable; Future / Promise could improve the structure a bit by standardizing the wrapping of onSuccess(result) and onError(err), which would make the code structure a bit nicer.

There is one more step in the evolution of async / await style syntax, and that is yield. The difference between the async / await style asynchronous methods is that the async / await mode registers the point at which the function was last executed as the callback entry to the io loop. io loop scheduler finds a response, finds the corresponding function, and presses resume( result) to drive the subsequent execution.

But jvm obviously doesn’t have yield support, so how does kotlin do this?

The asynchronous method is marked in kotlin by adding the suspend keyword.

At compile time, the suspend method will be converted to CPS approximately, adding a cont parameter to call back the return value or an exception:

The Continuation is a Promise/Future-like interface.

The context represents the concurrent context, which is omitted here. resume and resumeWithException are identical to the then() and catch() of Promise in js. All that’s missing here is an alternative to yield.

The context represents the concurrent context, which is omitted here. resume and resumeWithException are identical to the then() and catch() of Promise in js. All that’s missing here is an alternative to yield.

The alternative to yield is the StateMachine, which does two things: 1. suspends and remembers the execution point; and 2. remembers the context of the local variables at the moment the function is suspended.

How to record execution points?

First of all, all suspend points are necessarily the points where the suspend function is called. kotlin does something interesting here by using a switch case, where each suspend execution position corresponds to a label, and the next time execution resumes, the next execution position is found by the incrementing label. The approximate pseudo-code would look like this.

Draw a diagram to organize the general process. 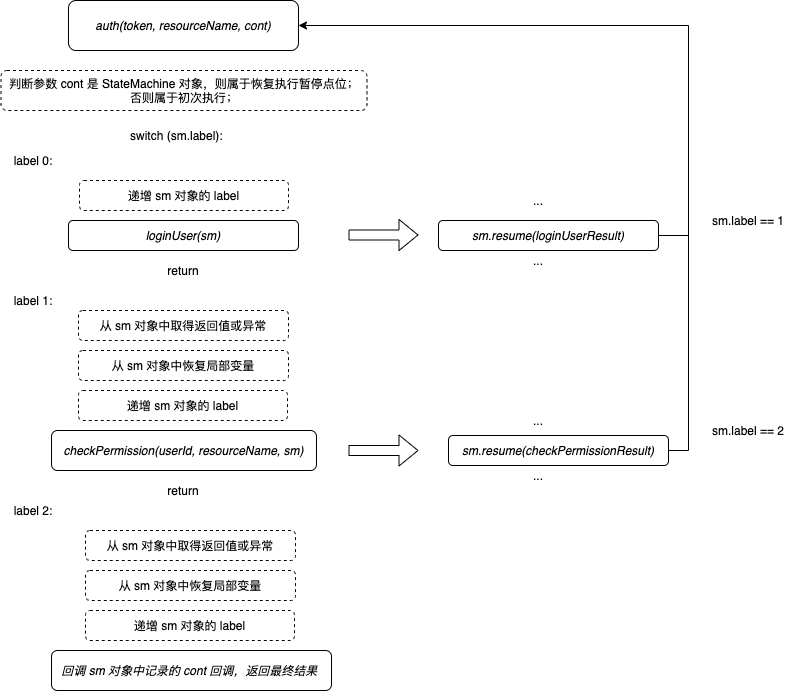