ZGC is a new generation of garbage collector introduced from jdk11, the expected stopping time is less than 10ms, and the stopping time is independent of heap size, and it can support tb-level heap.

As a fan of go, isn’t go’s GC already pretty good? The Initial Mark has a little STW, and the usual gc pause is less than ms? In fact, the effect of go GC is still far from the promise of ZGC, not when it comes to large heaps. It has no compaction, and running compaction has many benefits.

Compaction means relocation of object pointers, and in CMS and G1GC, both compaction and relocation are done in the younger generation of STW.

This requires a mechanism that can do object relocation concurrently.

In ZGC, this is the Load Barrier mechanism, which is very different from the CMS / G1GC Writer Barrier. The Write Barrier, including the INC Barrier and SATB Barrier, takes effect at the time when the object modifies its external reference.

The Load Barrier is not the direct opposite of the Write Barrier, but takes effect when “the heap pointer is dereferenced:”

There are more things to do compared to the Write Barrier, and there is different logic at different stages. In addition to the Mark marker tracking, it is possible to initiate moving objects (Relocate) and even redirect references (Remap), changing the pointer in place to point to a new object address.

There are two issues to think about.

For these two types of meta information, ZGC uses a set of Colored Pointer technique to save directly into the pointer:

ZGC is designed with a restriction that it only supports 64-bit architecture. As we all know, the pointer in 64-bit architecture often only uses 48 bits for addressing, and the 16 bits not used here can be used to store some meta information.

Here are 4 bits of meta information.

Ignore the Finalizable bit for now.

The Remapped, Marked0, Marked1 bits, only one of them is always 1 and the others are 0.

After the Mark phase is over, the marked objects, i.e. the living objects, can be used for moving. The Relocation Set + Forwarding Table design makes the execution time of the Relocation phase more controllable on the one hand, and saves the memory overhead of pointer redirection information on the other. On the contrary, SGC 1.0 will maintain a Forwarding Pointer in each object header, which is not as economical as ZGC Forwarding Table.

During the Relocate phase, the GC thread will traverse the objects in the Relocation Set to do the move. If the Load Barrier encounters a pointer in Marked state, it will check whether the reference exists in the Forwarding Table, if yes, it will modify the content of the pointer to the new address and mark it as Remapped; if no, it will initiate the move and modify the Forwarding Table. The GC threads will do Relocate concurrently and will take a CAS to do arbitration. 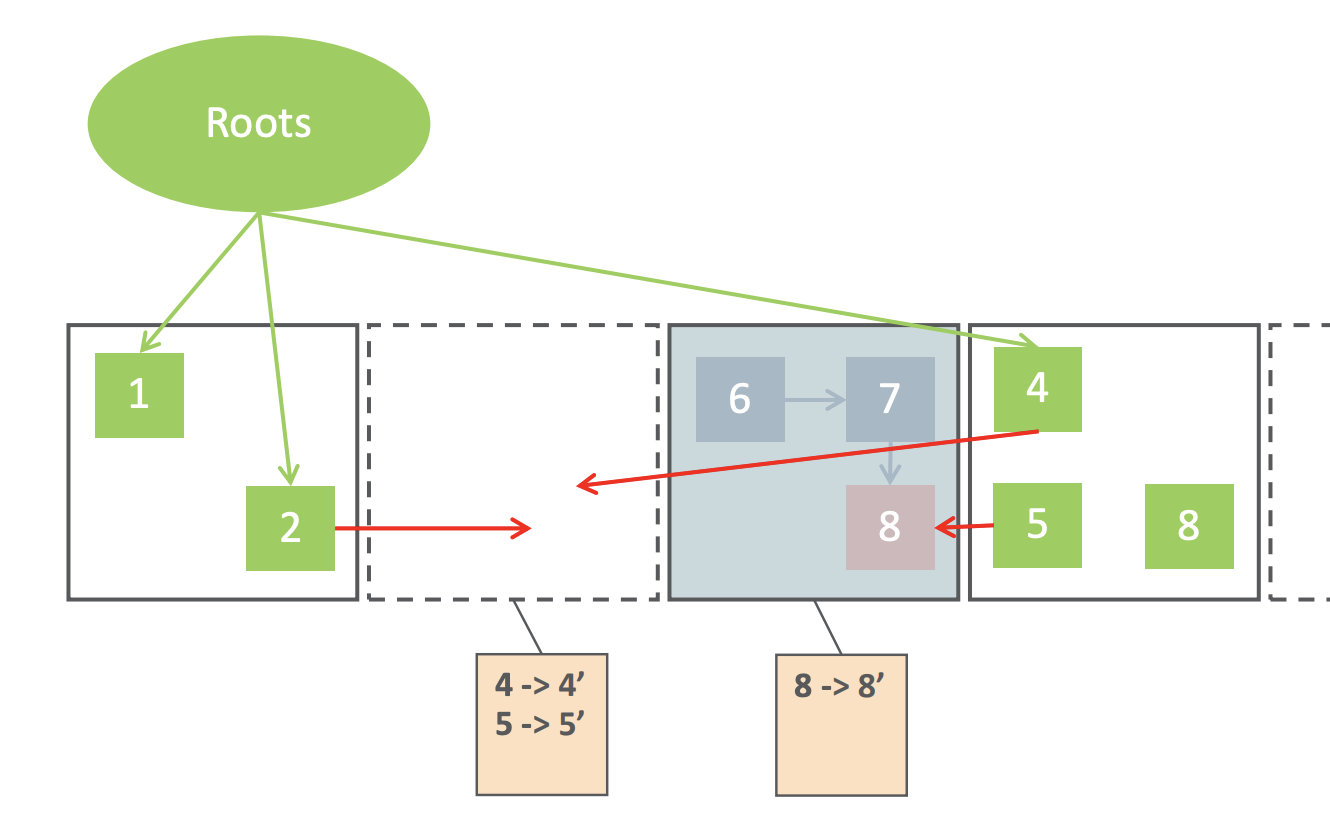 The Relocate phase completes the movement of objects in the Relocation Set, but the redirection of pointers (Remap) is only initiated based on the Load Barrier. A surviving object may not be actually accessed during the Relocate phase, so the reference will remain in the Marked state and will have to be checked in the Forwarding Table the next time it is accessed.

Here we may return to the question: Why are there two kinds of marked bits, Marked0 and Marked1?